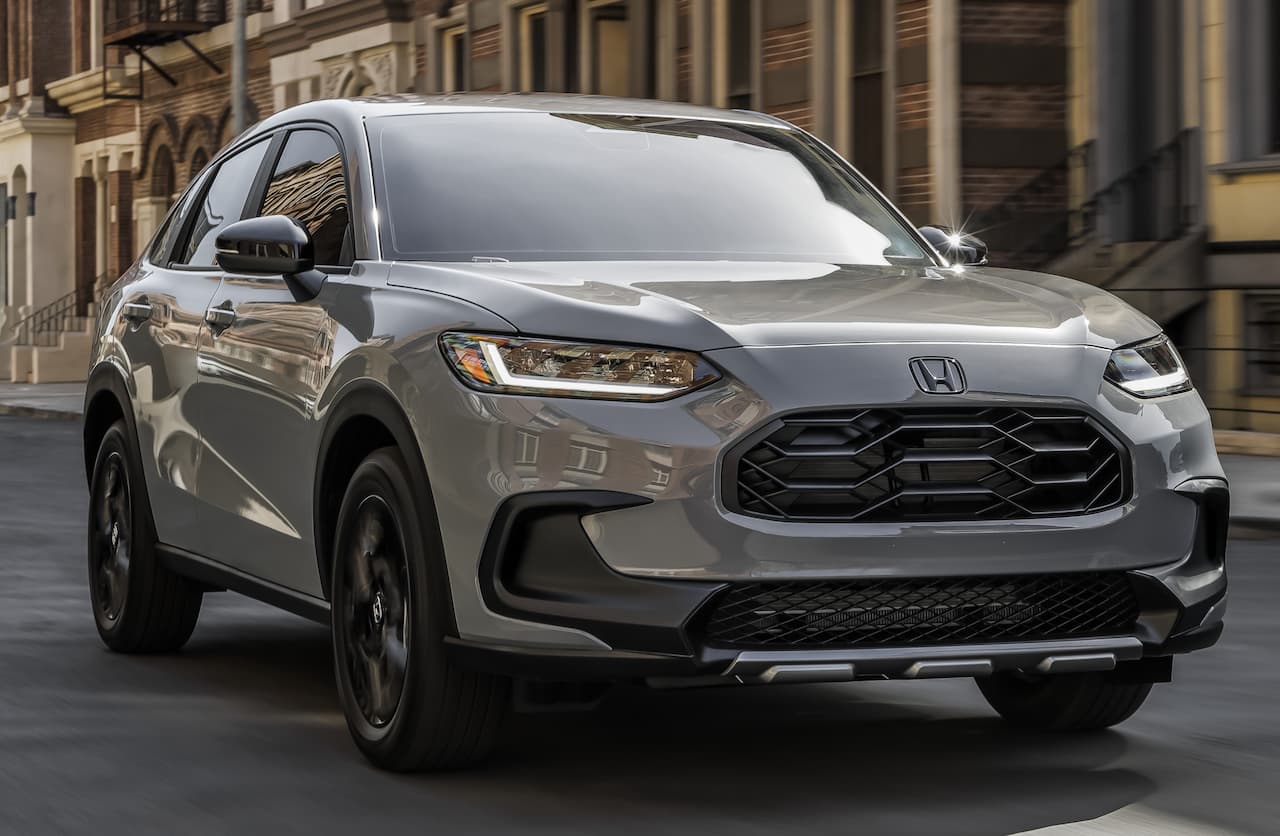 The second-generation Honda HR-V was launched for the North American market on June 7, 2022. While the global model (introduced in 2021) comes fitted with an e:HEV hybrid system, the North American-spec version is quite different and does not get the hybrid powertrain. Here’s everything we know about the 2023 Honda HR-V:

No hybrid powertrain for the U.S. yet

The U.S.-spec HR-V gets a 2-liter, four-cylinder gasoline engine that produces 158 hp and 138 lb-ft. There are three driving modes: Eco, Normal, and Sport, and power is sent to the wheels through a CVT. Front-wheel drive is standard, and all-wheel-drive is optional.

Lower mpg than the previous-gen HR-V

Japanese version of the HR-V (ZR-V) gets Hybrid option

In Japan, Honda sells the North American style HR-V with a different name – ZR-V. The ZR-V has a hybrid powertrain, so technically Honda could launch the HR-V Hybrid in the United States.

The ZR-V is the first Honda SUV fitted with the company’s new Sport e:HEV powertrain that clubs the 2.0-liter direct injection engine from the Civic Hybrid (Civic e:HEV) and the advanced two-motor hybrid system. Honda claims that combination allows for acceleration comparable to a 3.0L V6 engine.

The ZR-V Hybrid produces 104 kW (139 hp) and 182 Nm (134 lb.-ft.) of torque, while the traction motor generates 135 kW (181 hp) and 315 Nm (232 lb.-ft.) of torque. The latter is located along with the generator motor in an e-CVT. The electrified powertrain delivers a fuel economy of 22.1 km/l, which converts to 52 MPG. Though the test cycles are different and it’s not a fair comparison, that represents 2X the EPA-est. fuel economy rating of the U.S.-spec 2023 HR-V! For the U.S., Honda could even consider a simpler system that is tuned for economy, and one that is cheaper.

Honda has never offered the HR-V with a hybrid system in the U.S. and Canada, but the company is striving to increase the share of electrified models in its portfolio. “Our strategy is focused on introducing a higher percentage of hybrids in core models in the near term,” said Dave Gardner, Executive Vice President, American Honda, on June 28, 2021.

Honda declined to comment when asked about the HR-V Hybrid for the U.S., but Green Car Reports is convinced that it is “a Hybrid system away from greatness.” The website feels that better fuel economy would make the HR-V a complete package and is the only serious aspect that Honda needs to work on. Increasing the EPA-est. fuel economy to 40 mpg with electrification could work wonders for the compact SUV, even if that means charging a premium of a couple of thousand dollars over the gasoline variant. An HR-V Hybrid in the U.S. could help Honda mount strong competition to the 37-mpg (manufacturer-est.) Toyota Corolla Cross Hybrid.

In the next section, we’ll look at the gas-powered HR-V’s interior, features, and other aspects, which should apply to incoming versions as well.

Distinct styling for all variants

There are three variants of the 2023 Honda HR-V in the United States: LX, Sport, and EX-L, and they get dedicated styling elements.

The HR-V LX gets a matte-finish honeycomb grille and 17-inch alloys with silver paint. The HR-V Sport gets a horizontal-themed grille mesh, a gloss-black rear spoiler, and a chrome exhaust tip. The lower rear bumper is painted in gun-metallic, and the Sport also gets exclusive 18-inch five-spoke Berlina Black wheels.

The EX-L gets generous black treatment to the exterior. It gets a gloss black honeycomb grille, gloss black door pillars, and gloss black inserts on the front and rear bumper. The EX-L rides on 17-inch alloy wheels painted in Shark Gray with an exclusive machine-cut finish. All models will be available in seven colors, including two new options: Nordic Forest Pearl and Urban Gray Pearl.

All 2023 Honda HR-V variants get wide-set LED headlamps with an L-shaped DRL, an extended hood with two sharp lines, and a grille flanked by air curtains that channel the air through the bumper around the front wheels for aerodynamic benefits.

Compared to the global Honda HR-V model, the North American HR-V’s headlamps are more prominent yet less ‘meaner,’ but the straighter hood and the bumper’s powerful outer ends give it a more dominating character. The front windshield wipers remain hidden under the hood when not in use. Honda has used ‘laser brazing technology’ for precise roof casting to eliminate uneven moldings.

The North American Honda HR-V looks different from the side profile. It seems more practical than its predecessor and European cousin, with larger rear windows. Another significant change is the traditional rear door handles instead of concealed units of the global spec, which may result from cost-saving measures.

Rear elements that emphasize the width

The new North American HR-V has a familiar hunched rear-end for a sporty stance. Newly designed beak-shaped LED tail lamps look contemporary, while the sharper edges on the tailgate, and an inverted license plate section, make it immediately recognizable. It also gets a subtle roof-mounted spoiler, a shark fin antenna, and a black rear bumper.

Honda has focused on making the HR-V’s interior ergonomic and minimalist. There’s equal attention paid to form and function. The interior builds on Honda’s ‘simplicity and something’ design language that debuted on the Civic. Moreover, the Japanese brand says that close attention was paid to the operation of all switch gear, including the click and heft of the knobs, stalks, and switches.

The ‘Body Stabilizing Seats’ feature French stitching, while the rear seat bench is wider to make room for three passengers. Usually, accommodating three passengers at the rear can be a squeeze, but that might not be the case with the Honda HR-V. It gets a 24.4 cu-ft of the cargo area and a lift height of only 27-inches making loading and unloading items easy. By folding the 60:40 split seats, the cargo area can be expanded to 55.1 cu-ft.

For the first time, the HR-V gets an all-digital instrument cluster. The unit is a standard 7-inch LCD, while the infotainment is a 7-inch touchscreen. The LX and Sport models get a larger 9-inch touchscreen supporting wireless Android Auto and Apple CarPlay.

The HR-V also features wireless charging, 8-speaker premium audio, and physical controls for simple functions like volume and home and back touchscreen navigation. An active noise cancellation feature isolates the cabin from the engine and exterior noises.

Honda says the new HR-V shares its platform with the 11th-generation Civic. The SUV has grown by 9.4 inches in length and 2.6 inches in width. The SUV is 179.8 inches long, 72.4 inches wide, and 63.4 inches tall. It has a wheelbase of 104.5 inches. That said, unladen ground clearance is 7.3 inches for the Sport and 7 inches for the other variants.

The gas-powered 2023 Honda HR-V is available in FWD and AWD drivetrain layouts and three variants: LX, Sport, and EX-L. Honda has silently increased the prices of the LX, Sport, and EX-L grades by USD 150, USD 250, and USD 450, respectively. Following the price hike, USD 23,800 (excl. USD 1,245 destination fee) is the base MSRP.

Honda has announced that by 2040, it plans to convert 100% of its North American sales to electric and fuel cell vehicles. In the meantime, it will work to convert 40% of sales to these types of cars by 2030 and increase that count to 80% by 2035. Initially, the company will borrow GM’s third-gen global EV architecture and Ultium batteries to realize an electric car. Leveraging its partnership with General Motors, it has confirmed the Honda Prologue electric SUV launch in early 2024, and the first Acura electric SUV (ZDX) launch a few months later.

Before EVs, Honda will improve its hybrid portfolio in the U.S. market. The company has launched the all-new CR-V Hybrid and is bringing the new Accord Hybrid to dealers in the coming months. It expects the Hybrid variants to account for about 50% of the CR-V and Accord’s sales. The company has also confirmed a Civic Hybrid as a replacement for the Insight, which went out of production in June 2022.

2021 was Honda’s best year for sales of electrified vehicles in the United States, topping 100,000 cars (107,060 units) for the first time. In 2022, its electrified sales declined to 96,608 units. Do note that these figures include the sales of Acura models as well, in the year where the industry battled with supply chain issues. Globally, Honda aims for electrified vehicles to form two-thirds of its auto sales by 2030.

While having grown and upgraded to a more powerful engine, the HR-V has declined in the efficiency aspect and is clearly needs a fuel-sipping hybrid system.

Honda expects about 50% of the sales volume of popular cars like the CR-V and Accord to come from hybrid variants. As HEV sales pick up, its main competitor Toyota has already responded in a timely fashion (with the Corolla Cross Hybrid). Meanwhile, Honda has confirmed it will expand its U.S. HEV line-up with a Civic Hybrid in the future, and perhaps a HR-V Hybrid can be expected in the second wave of launches.

Which SUVs are rivals to the new HR-V?

The 2023 Honda HR-V competes with the Toyota Corolla Cross and the VW Taos. 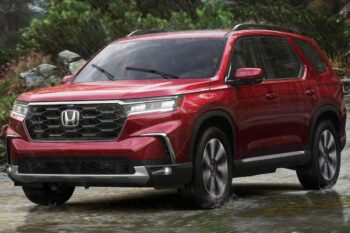 The fourth generation of the Pilot is here, and disappointingly, without electrification. 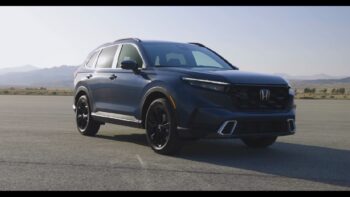 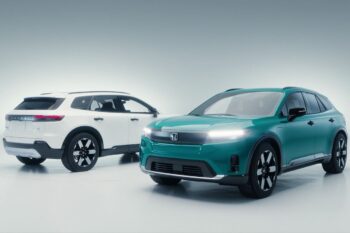