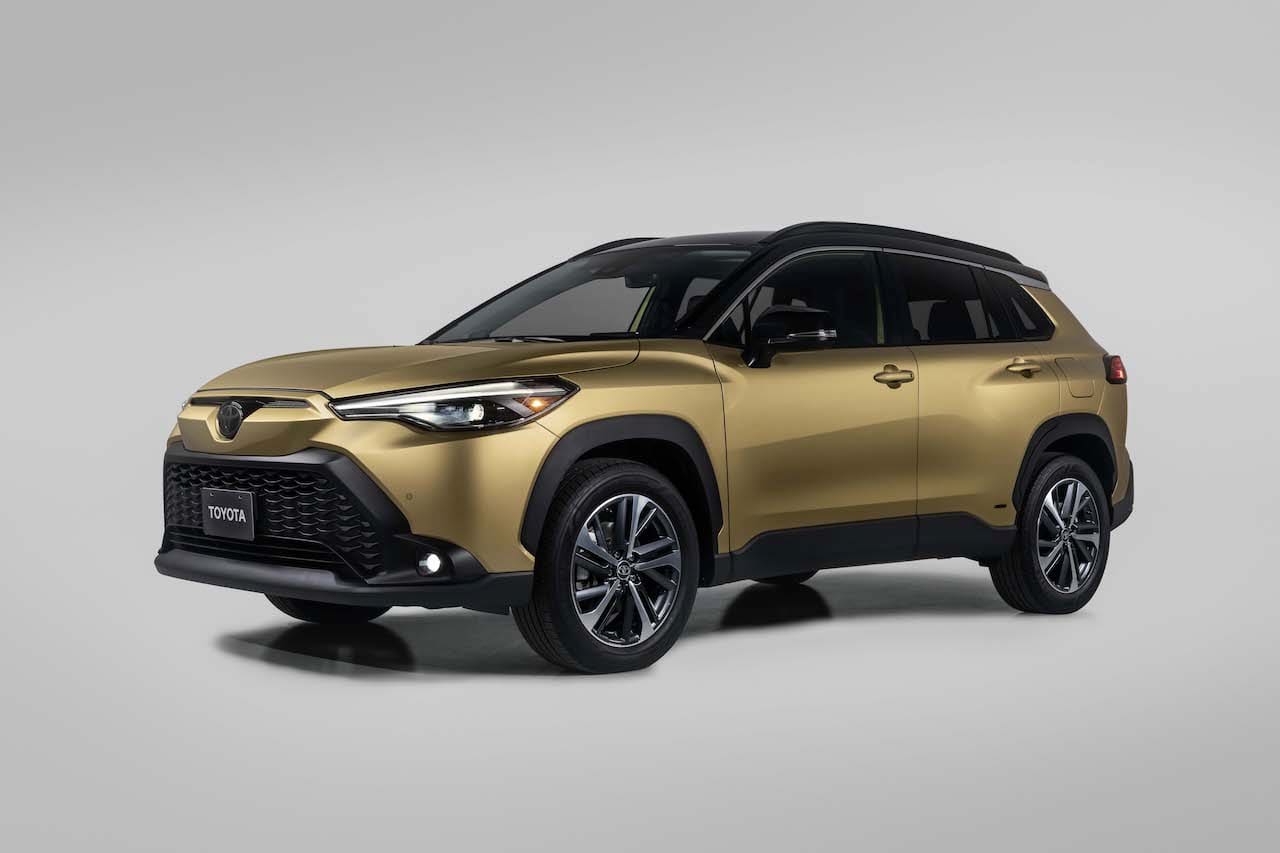 We’re certain that every regional Toyota office in the world has been paying attention to the Toyota Corolla Cross Hybrid since it was announced in Thailand in July 2020.

If you think of it, the Toyota Corolla Cross is the perfect overlap of a Venn diagram: the most popular vehicle nameplate (more than 150 countries and regions around the world have experienced a Corolla) with the trending body style of a crossover. Plus, Toyota has offered it internationally as a hybrid right from the start.

After being available in other markets for nearly two years, the Toyota Corolla Cross Hybrid finally premiered the U.S. on June 1, 2022. Here’s everything you need to know about the next Toyota hybrid car:

The Toyota Corolla Cross is a compact SUV positioned between the C-HR and RAV4. It features a crossover-like silhouette that’s softer than the RAV4, but it does look tougher than the C-HR. At the front, the Corolla Cross puts on an imposing look with a double-trapezoid grille. Moreover, it features curvy headlamps that get slimmer as they flow inwards to meet the radiator grille and a skid plate.

On the sides, flared fenders, a convex surface on the door panels, and strongly defined curves give the Corolla Cross a sense of toughness and a confident stance. At the rear, the compact SUV features a slanted windscreen, wide combination lamps, and a roof spoiler. Expect the hybrid variant to differ with new badges and wheels.

The Toyota Corolla Cross Hybrid features unique styling at the front and rear. Toyota has repositioned, enlarged, and sharpened the black grille and made the upper portion of the front-end look cleaner. The bumper is smoother and adds to the more aerodynamic appearance at the front. Instead of the typical blue brand logo for hybrids, Toyota has used a black brand logo at the front and rear, and it has applied a gloss black surround around the brand logo at the front. The communication is very clear—hybrid does not translate to weird or boring looks. However, the color coding and styling may vary as per the grade.

YouTube channel Raiti’s Rides’ Joe Raiti says that Toyota has borrowed a lot of design cues from the RAV4 for the Corolla Cross Hybrid. This commonality is especially visible on the large front grille of the new hybrid SUV. Raiti doesn’t like the way Toyota left the exhaust pipe half-exposed. The company could have given it a sporty treatment and made it fashionably visible on the XSE trim or just completely kept it out of sight.

As for the interior, Raiti is impressed with the display of the new infotainment system, which he says has a super-clear resolution. The digital instrument cluster also has nice, clear graphics, in his opinion. There’s good headroom for a six-feet tall person in the back. Alex on Autos’ Alex L. Dykes says in his first look video on YouTube that the lithium-ion battery pack under the rear seats doesn’t appear to have compromised space. However, the Corolla Cross Hybrid’s cabin space is not as good as in some of the other models.

The 2023 Toyota Corolla Cross rides on the TNGA-C platform, which is already well-scaled for the Corolla and C-HR. The Corolla Cross shares the 103.9-inch wheelbase with the C-HR. However, measuring 175.6 inches in length, 71.9 inches in width, and 64.8 inches in height, it is a larger and boxier SUV that is even more practical for small families. The Corolla Cross is 3.0 inches longer, 1.2 inches wider, and 3.2 inches taller than its platform-mate.

The Corolla Cross Hybrid could be a big step for Toyota. With high fuel efficiency and a crossover appeal, it can easily outdo the standard variant and bring many young customers to the brand who prefer a raised seating position and higher ground clearance.

Toyota has employed its fifth-gen THS under the hood and linked it to an electronic all-wheel drive system. The Corolla Cross Hybrid’s powertrain produces 194 horsepower and takes 8 seconds for a 0-60 mph sprint. Toyota is expecting the new hybrid SUV to deliver a combined fuel economy of 37 mpg irrespective of the grade chosen.

The Toyota Corolla reached a new sales milestone of 50 million units in July 2021. In its twelfth generation and fifty-sixth year of production, Corolla is Toyota’s one of its top-selling cars. From 1966 through 2022, it’s offered in many different styles and configurations, and now it’s also an SUV!

This vehicle (Corolla Cross Hybrid) goes on sale in the fall.

We looked, but haven’t spotted inventory of the Corolla Cross Hybrid at U.S. dealerships yet. Toyota has also not listed the Hybrid model on its official site. According to discussions on Corolla Cross Forum and Corolla Cross Facebook groups, interested customers have been told by some dealers that January 2023 could be the month it starts arriving at dealerships. Note that Toyota has not issued an exact launch date, and the info here is unofficial. We’ll keep an eye on developments, and revise this section when there is more.

The new Corolla Cross variant could be just what the automaker needs to appeal to a younger demographic in the United States. It comes with the proven hybrid drivetrain from the Corolla sedan and resembles a traditional SUV with its modest styling and enhanced practicality.

The production of the 2022 Toyota Corolla Cross began in September 2021 at the Mazda Toyota Manufacturing (MTM) plant in Huntsville, Alabama. This plant has an annual capacity of 150,000 Toyota vehicles. Toyota will assemble the 2023 Corolla Cross Hybrid alongside the conventional Corolla Cross in Huntsville. Given that the company is targeting the start of sales during this fall for the hybrid SUV, production should commence in the following months.

Toyota is yet to announce prices. The gas-powered Toyota Corolla Cross went on sale in the U.S. in October 2021, with prices ranging from USD 22,445 to USD 27,875. If we predict based on these values, the Hybrid model could launch at a base price of around USD 27,000.

The Toyota Corolla Cross Hybrid should provide excellent value for money, packing all the essential features, delivering a high fuel economy, and costing well under USD 30,000. It could be suitable for customers who don’t need or cannot afford a model as big or capable as the RAV4 Hybrid.

What is the Toyota Corolla Cross Hybrid release date?

The Toyota Corolla Cross Hybrid is expected to go on sale in the U.S. in the coming weeks.

What will be the Toyota Corolla Cross Hybrid price?

The Corolla Cross Hybrid could start at around USD 27,000 in the U.S. The company has not confirmed pricing.

Which are the competitors to the Corolla Cross Hybrid?

There are no direct competitors to the electrified Corolla Cross.