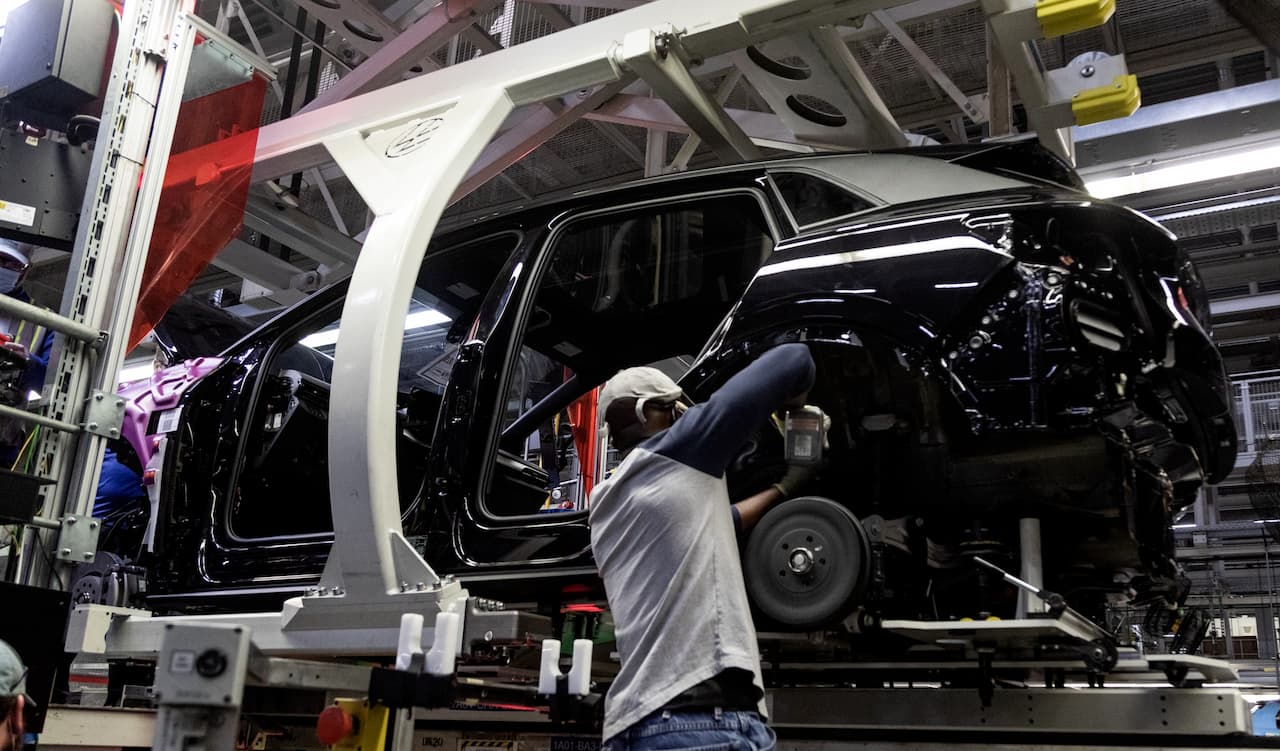 The VW ID.4, shipped from the Zwickau factory in Germany, has been in U.S. dealer showrooms since last year but at a high base price of USD 41,230 (before subsidy). Switching to locally produced units from the Chattanooga plant this year, Volkswagen hopes to slash the base price to around USD 35,000.

Test or trial production of the ID.4 at the facility in Chattanooga, Tennessee commenced, Scott Keogh, President and CEO, Volkswagen Group of America, announced on LinkedIn on August 20, 2021. The milestone unit, seen in the picture below, features Glacier White paint. Volkswagen Group wants eight factories on three continents to start rolling out MEB EV models by the end of this year, and its American plant in Chattanooga will be one of them.

Volkswagen of America CEO Scott Keogh told CNBC on June 9, 2022, that the brand is looking to ramp up monthly production of the VW ID.4 to 7,000 units by the end of 2022. Currently, the brand is assembling pre-production units to conduct testing, validation, and final quality checks at the Chattanooga facility. Once the ID.4 is past the testing and validation phase, series production will begin by July 2022, and sales units will start arriving at dealerships with “significant availability” by September 2022, Keogh told CNBC.

Preparing for production, Volkswagen Group had ordered hundreds of robots from Japanese robotics company FANUC for its Chattanooga manufacturing facility. The company plans to use the robots to produce the body and assemble the ID model’s battery. The locally manufactured ID.4 should see a noticeably higher demand. What is now assumed is that the 2023 VW ID.4 will feature a revised, “American-style” center console, as per a Car And Driver report. Volkswagen will source the U.S.-built ID.4’s battery pack from SKI, not LG, although the chemistry will be similar.

Volkswagen of America stated on June 8, 2022, that operations kickstarted at its state-of-the-art Battery Engineering Lab (BEL) in Chattanooga. The 32,000 square feet facility will accelerate the German brand’s push for electric vehicles in the United States. More importantly, BEL will support Volkswagen’s EV transformation, including launching the American-assembled ID.4 electric SUV.

Over 100 engineers at the BEL have begun operations with a focus on battery packs and batteries for MEB-based cars. VW says there’s potential for incorporating different types of batteries for the brands across VW Group in the future. Moreover, a new team of 30 engineers will focus on climatic, mechanical, electrical, and corrosion tests of battery cells and battery packs.

This Chattanooga facility is one of the four BELs VW Group has in the world. One is in Braunschweig, Germany, and two are in Shanghai and Changchun, China.

To prepare for the production of the ID.4 at the Chattanooga plant in the U.S., Volkswagen is increasing its workforce. Citing Burkhard Ulrich, Senior Vice President – Human Resources, Volkswagen Chattanooga, a report from Chattanooga Times Free Press in April 2022, said that the company is hiring around 1,000 new employees to add a third shift. It will have 4,500 employees in total then, as per the report.

Unlike the 2021 ID.4, the 2022 ID.4 offers a Plug and Charge feature at Electrify America charging stations, although Volkswagen hasn’t enabled it yet. Plug and Charge is one of the several new software features Volkswagen plans to bring to the ID.4 in the U.S. this year.

With Plug & Charge enabled, customers would no longer have to go through the fuss of the charging card authentication process to charge their ID.4 at fast-charging stations. Per the ISO 15118 standard, this technology involves encrypted and secure communication between the vehicle and the charging equipment. The automatic authentication after plugging in takes a few seconds, and then the charging starts without needing customer input. Electrify America, Volkswagen’s charging partner in the U.S. already offers this feature at its ultra-fast charging stations since November 2020.

VW ID.4: A launch of significance for VW’s EV ambition

Volkswagen expects the ID.4 to account for a third of the brand’s electric car sales by 2025, Ralf Brandstätter, its CEO, and Thomas Ulbrich, its R&D chief, revealed in October 2020. By 2025, VW aims to have 1.5 million electric vehicles sold annually, with half a million accounted for by the ID.4 electric SUV alone. So the carmaker certainly has a strategy to ensure the VW ID.4 tops the sales of electric vehicles.

At this price, the ID.4 will compete with gas-powered crossovers and SUVs like the Honda CR-V, Nissan Rogue, and Toyota RAV4, or entry-level electric hatchbacks like the Nissan Leaf and Chevrolet Bolt. The Tesla Model 3’s prices range from USD 46,990-62,990, while the Model Y, which is a crossover like the ID.4, costs USD 62,990 for the Long Range variant and a stiff USD 67,990 for the Performance variant.

And though Tesla has a head-start on production, VW will be making the ID.4 at three locations and five factories – two in Europe (Zwickau & Emden), two in China (Anting and Foshan), and one in the USA (Chattanooga) – chasing world domination in EVs.

With Tesla’s massive production push, the VW ID.4 has its work cut out. Aside from regaining consumer trust after the Dieselgate scandal, the ID.4 has to appeal to and convince the Honda CR-V & Toyota RAV4 buyers that they are getting a piece of what Tesla offers sans the premium pricing.

The VW ID.4 is one of the 70 IIHS Top Safety Pick+ models in the United States. Here’s how the VW electric car did at the Insurance Institute for Highway Safety’s crash tests:

Volkswagen started shipping the VW ID.4 it makes in Zwickau, Germany, to the U.S. in February 2021. The company shipped the EVs from the factory to The Port of Emden using a rail network and loaded them onto the Siem Aristotle. The LNG-powered car carrier ship delivered the EVs to the U.S. at the Port of Davisville in Rhode Island. According to a report from Automotive Logistics, this journey from the German factory to the American port is 27 days.

In the U.S., Volkswagen sold 16,742 ID.4s in 2021 and 2,755 units in Q1 2022 (January-March 2022). Citing Keogh, the Chattanooga Times Free Press report said that Volkswagen is seeing an overwhelming demand for the ID.4 in the United States. The company plans to double sales this year and repeat that performance in 2023.

On March 21, 2022, Volkswagen announced a USD 7.1 billion investment in North America to boost vehicle range, R&D, and manufacturing in North America. The company said it aims to convert 55% of sales in the U.S. to electric vehicles by 2030. It will launch the VW ID. Buzz as its second dedicated EV in the country in 2024 and new electric SUVs from 2026, including the VW ID.8. Across brands, Volkswagen Group’s EV portfolio in America will see the addition of more than 25 new electric vehicle models through 2030. Volkswagen (the brand) will phase out gas-powered cars from the U.S. line-up by early next decade.

Volkswagen Group is considering producing EV components, including battery cells and electric motors, in North America. The company aims to build a battery cell plant in the U.S. and upgrade its factories in Puebla and Silao, Mexico, to assemble EV components and EVs.

With the ID. Buzz and other popular models from the core brand and other marques, the Volkswagen Group could increase market share in the U.S. two-fold to 10 percent, Dr. Diess said after announcing the New Auto long-term strategy in July 2021, as per Automotive News.

Volkswagen Group wants a second vehicle production plant in the U.S., according to a report from Germany’s Manager Magazin. The publication learns that the company may open the new manufacturing facility right next to the existing one in Chattanooga, Tennessee. Note that Volkswagen has not publicly spoken about plans for a new plant in the United States.

Volkswagen Group could have an annual production capacity of up to 600,000 vehicles from the two production facilities. The report doesn’t spell out the details, but it’s possible that the new factory could be exclusive to EVs, which would allow a higher production efficiency and make the investment future-proof.

Volkswagen has more than 600 dealers across the United States. It is investing millions of dollars in preparing the U.S. Volkswagen dealers for the transition to EVs. The company is drawing a lot of first-time EV buyers and customers to the brand with the ID.4, and the conquest could continue with future EV launches.

90% of ID.4 owners were first-time EV buyers, 70% were new to Volkswagen. To continue that conquest, we’ve committed over 20 million through this year to our dealer network, transforming Volkswagen dealerships into EV experience hubs serving communities across the country.

Today, Electrify America already provides the largest open network of DC fast chargers in the U.S. and is serving all models of electric vehicles on the market. I’m excited to announce that we will push our commitment into the charging network even further. Electrify America will more than double the total amount of the existing charging sites in 2025. Just let me repeat it will more than double. This means that we will have in total 10,000 charging points at this time.

With the massive demand for electric SUVs in the United States, the order book for the VW ID.4 that will be locally manufactured at the Chattanooga plant in 2022 is already full, reported Times Free Press on May 19, 2022. The start of production of customer cars is still some time away, but the locally-made electric SUV is already sold out owing to a mismatch in demand and supply.

Even though customers will likely have to wait for months before getting their hands on the ID.4, global supply chain problems seem to be easing. At the end of May 2022, Dr. Diess said that he had seen a clear improvement in the supply of semiconductors. Customers who were not able to make the booking will have to wait until the next order book opens up, or look at options from other brands.