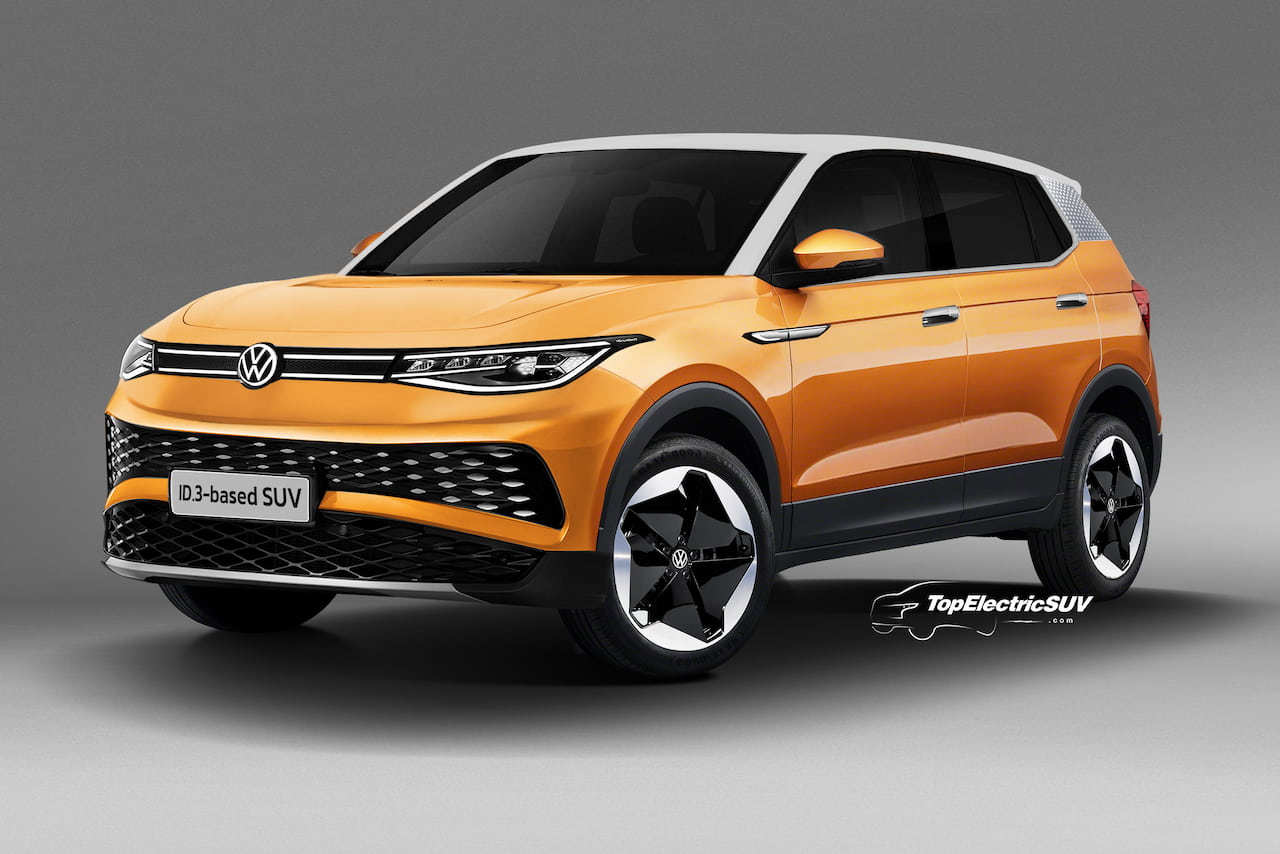 Update: ‘Confirmation’ revised with a rendering of the VW ID.3 SUV.

Volkswagen has confirmed plans to introduce ten new electric vehicles by the year 2026, with the VW ID.3 SUV being one of the launches. Positioned below the ID.4 (and above a future electric small SUV), the ID.3 SUV will be something like the T-Roc that today sits between the T-Cross and Tiguan in the European lineup.

On October 26, 2022, Thomas Schäfer held a conference in Berlin to outline the new strategy for Volkswagen as he completed his first 100 days as the CEO of the company. After that event, he wrote on LinkedIn that Volkswagen is considering a compact SUV based on the ID.3.

The same day, Autocar cited Schäfer saying that the VW ID.3 SUV would look dramatically different from the ID.3 hatchback and arrive before 2026. That evening, Automobilwoche quoted Schäfer saying the German automaker is working “intensively” (translated) on the new compact SUV, clarifying the project is beyond the evaluation stage and that the wheels are in motion.

While the exterior of the ID.3 SUV will be quite different from the hatchback, the interior could be quite similar. It may download all the improvements of the updated hatchback which is expected to launch next year (ID.3 facelift). Expect it to have an updated infotainment system that’s finally stutter-free, a revised steering wheel with physical buttons, higher quality materials, and other fixes the media and customers have asked for in the electric hatchback.

The targeted release date suggests that the VW ID.3 SUV will sit on the updated version of the MEB platform. On April 12, 2022, at the UBS Paris Electric Car Day event, Dr. Silke Bagschik, Head of Marketing & Sales, Product Line e-Mobility, Volkswagen Group, revealed the planned improvements for the MEB platform. She said that Volkswagen is working on increasing the maximum DC charging input of MEB platform-based EVs to 200 kW and their range (WLTP) to up to 700 km (435 miles) and reducing their 0-100 km/h (0-62 mph) acceleration time to as low as about 5.5 seconds.

The ID.3 SUV may get the same battery pack and motor options as the facelifted ID.3 scheduled for a world premiere in 2023. Volkswagen may plan the ID.3 SUV with 58 kWh and 77 kWh battery pack options and 110 kW and 150 kW (147 hp and 201 hp) rear motor options. A GTX variant that sports two motors with a combined power of 220 kW (295 hp) and offers an all-wheel drive drivetrain layout may follow a few months later. A VW ID.3 GTX (hatch) is already on the way.

While the VW ID.3 never made it to the U.S. due to its size and primarily European design, the ID.3 SUV could have a chance in the U.S., as a sub-USD 35,000 model. Launching the ID.3 SUV in the U.S. will make sense if Volkswagen manufactures it in North America, sources core components from the same region, and prices it competitively.

As the world increasingly turns to high-riding cars, the ID.3 SUV is likely to be more appealing than the ID.3 hatchback. It promises more passenger and cargo space, as well as added ground clearance, which improves practicality and usability. The ID.3 SUV can fill the gap between the ID.3 (EUR 38,060 onwards) and ID.4 (EUR 46,335 onwards) in Europe, offering customers an all-electric alternative to the Tiguan (EUR 31,545 onwards).

What is the VW ID.3 SUV release date?

What will be the VW ID.3 SUV price?

Which models will be VW ID.3 SUV rivals?

Featured Image: TopElectricSUV’s rendering of the VW ID.3 SUV. The rendering is for illustrative purpose only.