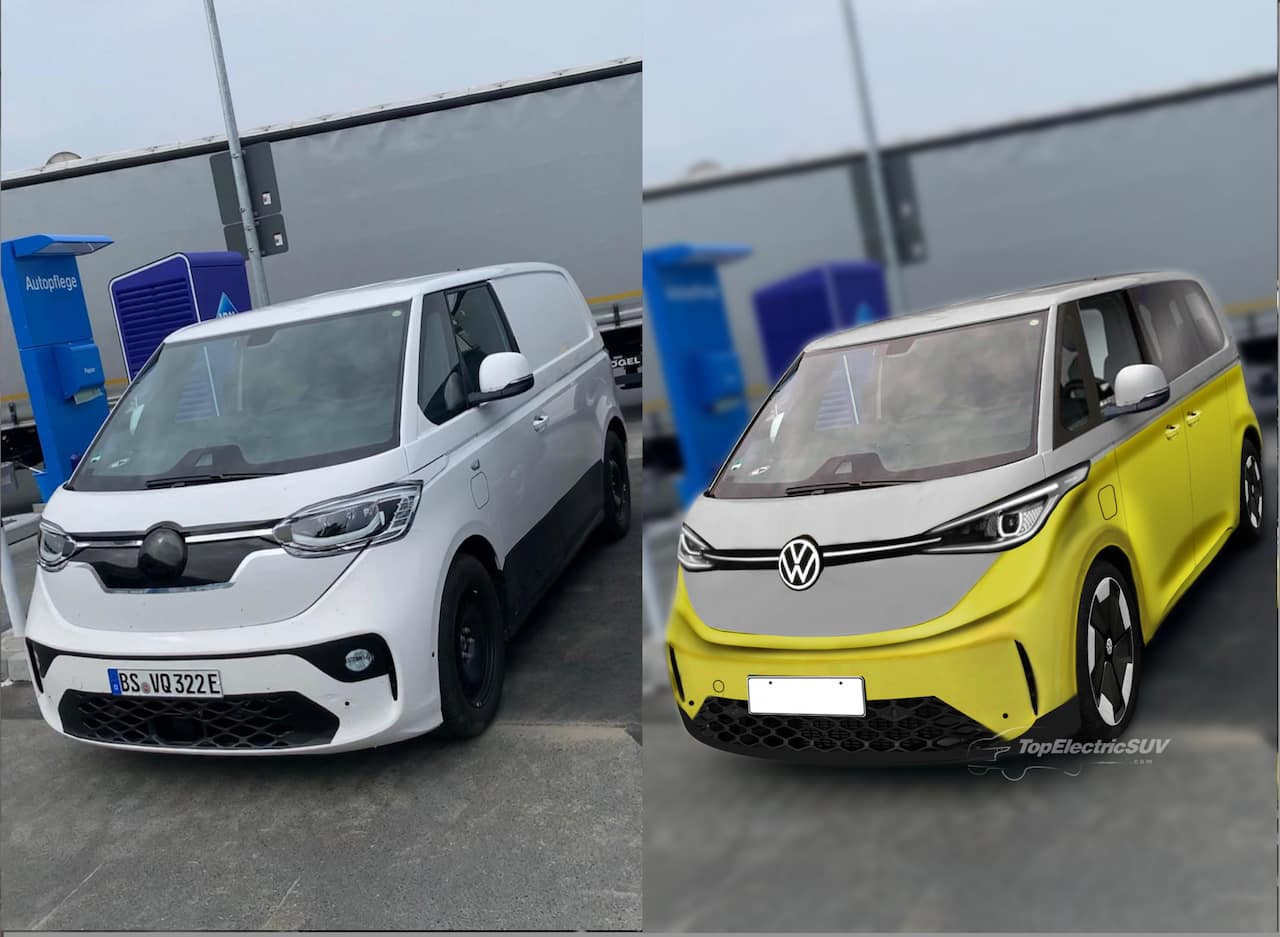 After running test prototypes of the VW ID. Buzz underneath a Transporter T6’s shell for a few months, Volkswagen has finally begun testing the production body of its new electric van. TopElectricSUV.com reader David has spotted a production VW ID. Buzz Cargo charging at an Aral Gas Station in Braunschweig (Brunswick), Germany. David told us that he snapped the prototype while charging his ID.3.

The production VW ID. Buzz here has no sliding door on the driver’s side and features disabled rear windows, typical commercial vans characteristics. Thus, this must be the showroom-bound version of the ID. Buzz Cargo premiered at IAA 2018, a year and a half after the original ID. Buzz passenger van at the NAIAS 2017. We can conclude some basic design characteristics of the production VW ID. Buzz passenger version from David’s images. The passenger and commercial versions would share the proportions and shape.

The spy pictures suggest that the production VW ID. Buzz isn’t as clean or sleek as the concepts. Even though Volkswagen has disguised some parts on the test mule, it looks certain now that the flush-fitting LED headlights and front fog lights, as well as the giant Volkswagen logo, haven’t transitioned into the final design. The V-shaped hood is not as tall and unlike the Transporter, it doesn’t have a semi-hood design.

From the back, note how the VW ID. Buzz is lower than the Multivan with a squatter stance. The glass panels of the all-electric model are also noticeably smaller. The wide tail lamps with curves, just like the headlamps, are part of the disguise and aren’t representative of the final design. However, we are positive that the production version will also have slender wrap-around LED clusters.

Volkswagen equipped the passenger ID. Buzz concept with a two-part panoramic sunroof that can let in plenty of natural light into the cabin. However the ID. Buzz Cargo concept used a solar panel roof that can increase the driving range by 9.3 miles (estimate). We don’t see that feature on the test mule, but the company may offer the photovoltaic system (as an option) when it launches the model next year. Another major difference on the Cargo version was rear-wing doors, but it looks like the company has reverted to the passenger version’s tailgate.

The production VW ID. Buzz interior (which you can see on Motor1) looks quite similar to the VW ID.4. With an Open Space theme, the cabin is airy and light, with a lounge-like atmosphere. The interior looks clean and simple but quite modern and upmarket for a people mover.

The compact steering wheel has a flattish center cap and touch-sensitive controls. On the left is a control panel housing the light and vision functions, followed by a round AC vent. A floating touchscreen panel resides in the middle of the dashboard, most likely measuring 12 inches diagonally for AVN. An inclined surface below the central display has sliders to adjust the volume and temperature. Finally, right behind the steering sits a compact digital instrument cluster along with a rocker switch that allows selecting the drive modes and enabling the parking brake.

Augmented Reality Head-Up Display, Play & Pause stainless steel pedals, ambient lighting with 30 or more colors, wireless smartphone charging pad, and front seats with lumbar support, twelve or more electric adjustment options, a memory function, and a massage function are some of the other key features we expect in the production ID. Buzz.

Volkswagen plans to offer three different seating layout options for the ID. Buzz at launch in the U.S. and Europe, says a report from Automotive News Europe. The U.S. will get the electric van in a ride-hailing configuration with four seats, two forward-facing and two rear-facing. The Euro-spec ID.Buzz will have six seats and target ride-pooling services.

The ID. Buzz will be available as a delivery van as well, probably with two seats, opaque rear-lateral glass panels, and a mesh bulkhead. Volkswagen is working on a Level 4 autonomous driving system for the ID. Buzz, and it could offer this technology first in the commercial model.

Dr. Herbert Diess, CEO, Volkswagen Group, confirmed at the company’s New Auto strategy announcement that the ID. Buzz will be the brand’s first autonomous vehicle. While talking about profiting from mobility and transport as a service, he said:

Fully autonomous will be an integral part of our business model in 2030. Robo-taxi services require four different layers of activity. A booking platform to match demand and supply, holding the customer data, and managing the payments. This platform can be highly profitable. The operation of the fleet, a service business which we are testing with our MOIA brand in Hamburg. The autonomous vehicle – we will start with the ID. Buzz AD. And then the virtual driver, the most complex software system the world has seen so far, in fact, a worldwide active neural network which continuously improves its driving capabilities. Also potentially very profitable.

LiDAR will be integrated in our first fully autonomous vehicle – the upcoming all-electric ID. Buzz AD, which will be used for our 2025 pilot service.

Senger shared highlights about the VW ID. Buzz’s different configurations in his presentation of the autonomous version.

Senger said that the ID. Buzz “will be a truly iconic and also highly versatile product.” Then, he shared revealed teasers (above) of the different seating layouts of its passenger versions and talked about them briefly.

It (ID. Buzz) will support EU-focused ride pooling for multiple customers sharing a ride at an even more attractive price and with the additional benefit of less inner-city traffic congestion. The ID. Buzz will provide safe access from one side and each seat will be individually accessible with a separate information screen for each passenger the more US-focused ride-hailing variant will provide a comfortable space for our customers traveling alone or in small groups of family and friends.

For our goods transportation solutions, the autonomous ID. Buzz Cargo provides the right base for many use cases, eliminating the requirement for a human driver and making parcel delivery even more productive.

The production VW ID. Buzz will likely ride on the extended MEB-XL platform and have a wheelbase of around 3,300 mm. Like the concept version, it should have an air suspension at the rear axle and electronically controlled dampers for maximum comfort.

Volkswagen may offer the ID. Buzz in single-motor RWD and dual-motor AWD configurations, with battery packs as large as 111 kWh. The battery pack would be part of the floor, reinforcing the vehicle’s structure and lowering its center of gravity.

Inferring the spec sheet of the concept ID. Buzz (incl. ID. Buzz Cargo) it’s possible to equip the ID. Buzz with up to two motors and 83 kWh and 111 kWh battery packs. Volkswagen was also talking about a 48 kWh battery pack when it unveiled the Cargo version in concept form, saying that it is enough “if the transporter covers fairly normal distances in the city on a daily and weekly basis.” However, don’t expect that smallest option, if available, to come stateside.

The VW ID. Buzz’s maximum power could range between 150 kW (201 hp) and 275 kW (369 hp). The range with the biggest battery pack may deliver a range of between 325 and 350 miles (WLTP). In addition, Volkswagen may offer a solar roof option to extend the daily range by around 10 miles. As always, expect official EPA estimates to come out lower than the WLTP ratings.

Recent test mule sightings reveal the ID. Buzz’s thin turn indicators in the rear lights. Moreover, we also see a cut-out for the charging port on the right-side rear fender. However, it’s placed too low, and so, maybe it’s part of the disguise.

As our third campervan and as a zero-emission alternative beginning in 2022, we’re going to see our ID. Buzz, an all-electric commercial vehicle, also available as an autonomous driving vehicle soon. With the ID. Buzz, beginning in 2023, we’ll be returning to the North American market, and we also see major interest there right now. So, the ID. Buzz is really in addition to our van portfolio, and rather than having a one-size-fits-all solution, it’s an exact fit for everyone.

As the third Multivan, as of 2022, the ID. Buzz will nicely round out our van portfolio. It will become fully electric, and soon, fully autonomous icon from Volkswagen Commercial Vehicles. And with that, Volkswagen Commercial Vehicles will now define such issues as autonomous driving, new digitally mobility transport solutions, become the leader here, and also shape the new mobility, and we’ll also continue to thrill our customers.

Volkswagen Group could launch several niche models in the coming years to intensify customer interest in its EVs. After the New Auto strategy announcement on July 13, 2021, Dr. Diess said that the company needs more emotional products, as per a report from Automotive News. Cars like the VW ID. Buzz really adds something to the brand and helps it stand out from the competition. The company expects to increase its market share in the U.S. to 10% by the end of the decade. Diess thinks that the modern-day VW microbus would be popular in the country.

The VW ID. Buzz is a big deal for Volkswagen Group in the U.S. market, where it faced a major setback following the dieselgate scandal in 2015 and is trying to make up for it with electrification.

Volkswagen Commercial Vehicles is evolving more and more into a lifestyle brand, offering the range of famous California vehicles and soon launching our most emotional electric car so far – the ID. Buzz. It will significantly contribute to enhancing the appeal of the Volkswagen brand, reloading it with emotions and love, particularly in the United States where the coming home after 30 years will boost our EV campaign in the market and bring back the emotional touch with all the memories of from the 70s.

Volkswagen Commercial Vehicles is recovering from the losses from temporary plant closures and low demand witnessed in 2020. While the semiconductor shortage is a new challenge, the company increased customer deliveries by 25.4% to 205,000 units in the first half of 2021. However, the operating profit during that period was only EUR 87 million, nearly four times lower than in H1 2020 – EUR 334 million.

The Multivan, Transporter, and Crafter were among Volkswagen Commercial Vehicles’ best performers in H1 2021. The company sold 95,000 T series vehicles to customers (+54%) and more than 35,000 units of the Crafter (+43%). Caddy’s sales during this period were just a shade under 50,000 units. Demand for its popular campervans also went up in the first half of the calendar year. The California 6.1’s sales rose by 40% Y-o-Y, and Grand California’s orders doubled from the same period last year. 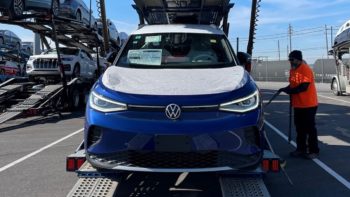 The ID.4, currently being imported from Germany for the U.S., will take the place of the Passat in Chattanooga.

With its future-forward SSP platform, Volkswagen Group aims to retain its leading position in the auto industry even in the carbon-neutral era. 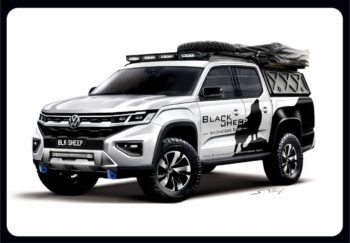