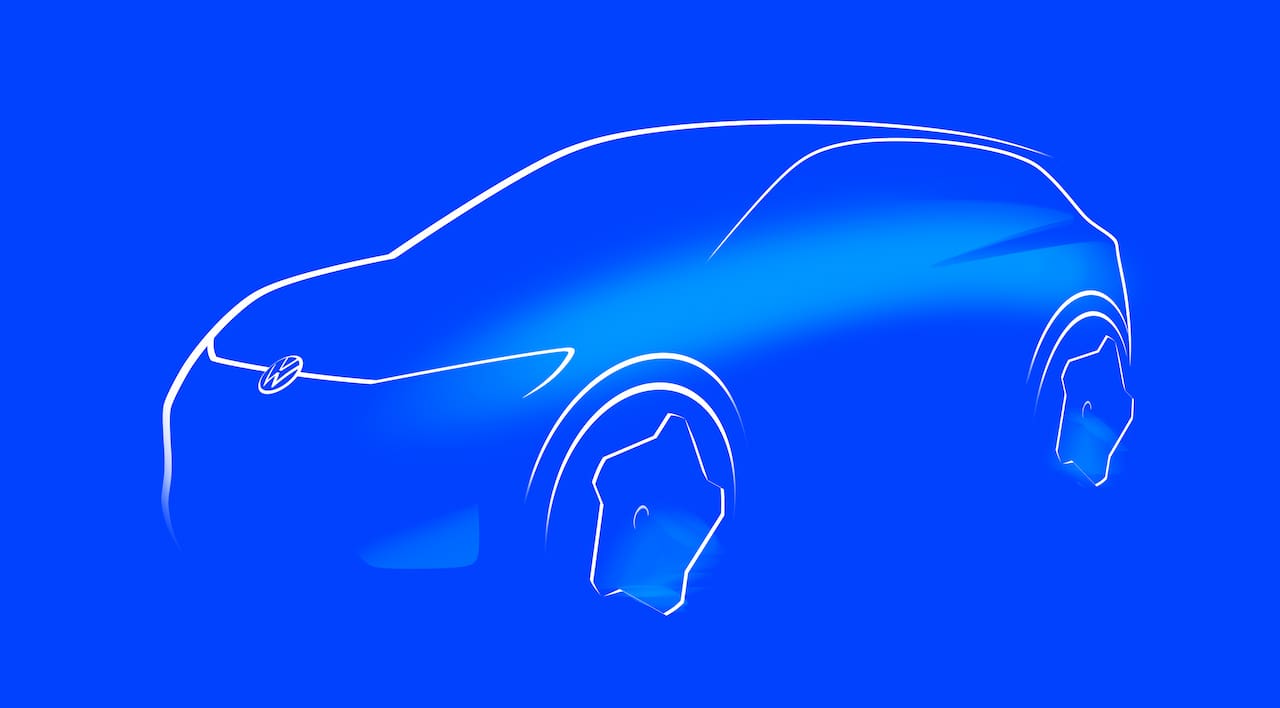 Volkswagen plans to introduce ten new electric vehicles by 2026. The brand-new products will include a VW ID.2 SUV, the German automaker’s electric alternative to the T-Cross, offering an affordable clean mobility option to SUV lovers. Here’s everything we know about the compact electric SUV:

On May 5, 2022, Volkswagen Group had shared on Twitter that it would manufacture three small electric SUVs, one from Skoda, one from Cupra, and one from Volkswagen, at the Spanish plant from 2025. The company released teasers of the three models, including the potential VW ID.2 SUV with a soft crossover silhouette.

The ID.4’s influence on the exterior should work better in Europe compared to a boxy design inspired by the ID. Life, which has apparently fallen out of favor in Wolfsburg. Moreover, it should have better aerodynamics, and therefore a higher range.

The interior of the VW ID.2 SUV will likely be clean and minimalistic, designed with inspiration from bigger EVs like the VW ID.4 and the upcoming VW ID.3 SUV. In some ways, it is likely to be better than the current Volkswagen EVs. For example, it may feature a new infotainment system that’s fully lag-free, swift, and more intuitive. Another difference from present-day models will likely be a conventional steering wheel with push buttons.

Our new entry-level e-car will come in two versions – as a small car and as a sporty crossover variant.

Thomas Schäfer, CEO of the Volkswagen Passenger Cars Brand, Member of the Group Board of Management and Head of the Volume Brand Group, on Linkedin in November 2022

An ‘MEB eco’ platform, which other Volkswagen Group brands call ‘MEB short’ and ‘MEB Small,’ will underpin the VW ID.2. This platform will be a lower variant of the MEB, where the electric motor powers the front wheels by default.

Volkswagen would offer the ID.2 SUV with various permanent magnet synchronous motor options. The top-end unit may produce up to 172 kW (234 PS/231 hp) and 290 Nm (214 lb.-ft.) of torque. The same goes for the battery pack, which may come in two or more energy storage capacities. One of the options could be a 57 kWh unit offering a range of around 300 miles as per WLTP.

The cells used in the battery pack should have a more sustainable and cost-effective lithium iron phosphate (LFP) chemistry instead of the commonly used lithium nickel manganese cobalt (Li-NMC) chemistry. The Iron-based chemistry is heavier and doesn’t allow the highest range, but the cost and durability advantages outweigh the downside in entry-level EVs.

During Volkswagen Group’s Q1 2022 investor and analyst conference call in May 2022, (via YouTube), former CEO Dr. Herbert Diess said that there is a fear that the high cost of EV technology may become a hurdle in entering segments like that of the VW T-Cross. He admitted that LFP battery cells won’t be nearly as good as the nickel-based cells. Moreover, gasoline-powered models will get more expensive after the adoption of the proposed Euro 7 emission norms, which could make EVs seem less expensive in the future, Dr. Diess concluded. LFP cells will allow competitive pricing for small EVs.

“We do have an entry chemistry with Iron Phosphate,” said Frank Blome, Head of Battery Cell and System, Volkswagen Group Components, at the Power Day 2021 event. He acknowledged the “slight range disadvantage” of LFP compared to NMC. However, LFP is more sustainable because of greater supply security. “The cycle stability is very good,” Blome said. “That means specially for cars with low range, this is a very promising technology,” he added.

We will put battery in the middle of the heart of our development of cars. This is the major cost point in the EV world. If we have the volume, and we will roll it out, we need (to) put it in the middle, in the centre of our cars, and then defining the cars around the battery.

On the battery cost

Volkswagen Group wants to move battery production in-house to achieve stability in supply and better control over the cost. Porsche Consulting says that the battery is around 40% of the production cost of a vehicle. This makes it the largest cost factor, which no automaker would want to lose control over to an external supplier. Asian suppliers currently dominate the market, but Volkswagen Group plans to become self-sufficient in the future.

Volkswagen Group’s small EVs would benefit from unified cell technology. With the same physical pack format used for different chemistries, unified cell technology would lower development and production costs. “In our entry segment, the unified cell will bring down battery cost by 50% compared to today,” said Dr. Diess at the company’s Power Day 2021 event. The company is developing a standard cell that it can use in 80% of its electric vehicles in the future.

“We want to be a leader in cell technology,” Thomas Schmall told Porsche Consulting. Schmall is the member of Volkswagen Group’s Board of Management responsible for Technology and also Volkswagen Group Components’ CEO. Volkswagen Group will develop and manufacture cells on its own in the future.

After Germany (Salzgitter) and Sweden (Skelleftea), Spain is getting the third battery cell gigafactory of the Volkswagen Group. The Spanish battery cell plant (Gigafactory Valencia) will have an annual production capacity of 40-gigawatt hours and employ 3,000 people. This is the factory that is likely to supply pieces for the VW Group’s entry-level products.

The MEB short platform supports a MacPherson strut front suspension and a torsion beam rear suspension. According to an earlier report from Autocar, Volkswagen plans to use this traditional suspension setup in the production compact crossover, as shown in the ID. Life.

The VW ID.2 SUV range would include a performance-focused VW ID.2 GTX SUV. Volkswagen has confirmed that it plans to offer a GTX variant of all its electric models.

The VW ID.2 may come with fewer hardware configurations than a VW T-Cross. This would allow Volkswagen Group to manufacture it with fewer complexities. It may equip the electric SUV with features that customers can enable later, including connected vehicle tech, particularly useful for ride-sharing.

Volkswagen will try reducing hardware variants in a few years. Instead of different output levels from the factory, it may allow customers to increase or decrease the motor power during the EV’s life. This would become possible only when the motors, batteries, suspension, and other core components achieve a high level of adaptability and provide enough wiggle room for digitally-made changes.

Volkswagen Group plans to participate in Spain’s PERTE project and make the country a strategic base for its small EV models. The company could make the Cupra urban EV, the VW ID.2 SUV, and other affordable EVs of the platform for the VW Group brands at the Seat Martorell factory. These models would belong to a “Small BEV Family” and are technically similar for competitive pricing.

The VW Group is developing small and affordable models such as the VW ID.2 SUV and a few emotional models that are focused on building the brand.

We are working on electric cars around 20k Euros for entry segments.

The group is also considering a VW ID.1 that could be a potential VW e-up! successor. Oliver Blume, the CEO of Volkswagen Group and also Porsche, has said that an ID.1 “is currently still a product idea” and the company is “intensively” discussing it. That’s according to a report Automobilwoche released on May 12, 2022, which, citing Hildegard Wortmann, also says the e-up! will remain in production till the end of 2025. Wortmann is the BoM member responsible for Sales at both Audi and Volkswagen Group.

The VW ID.2 SUV could be positioned as a pure-electric small SUV that’s as affordable to buy or lease as a T-Cross, but noticeably more spacious and is cheaper to run. Additionally, it may feature a futuristic design and advanced in-cabin technologies, which would make it more appealing to young buyers.

What is the VW ID.2 SUV release date?

The VW ID.2 SUV should be launched in Europe in the second half of 2025 and be manufactured in Spain.

What will be the VW ID.2 SUV price?

What are the future rivals of the VW ID.2 SUV?

The expected competitors are the reborn Renault 4, and the new Fiat Panda Electric.