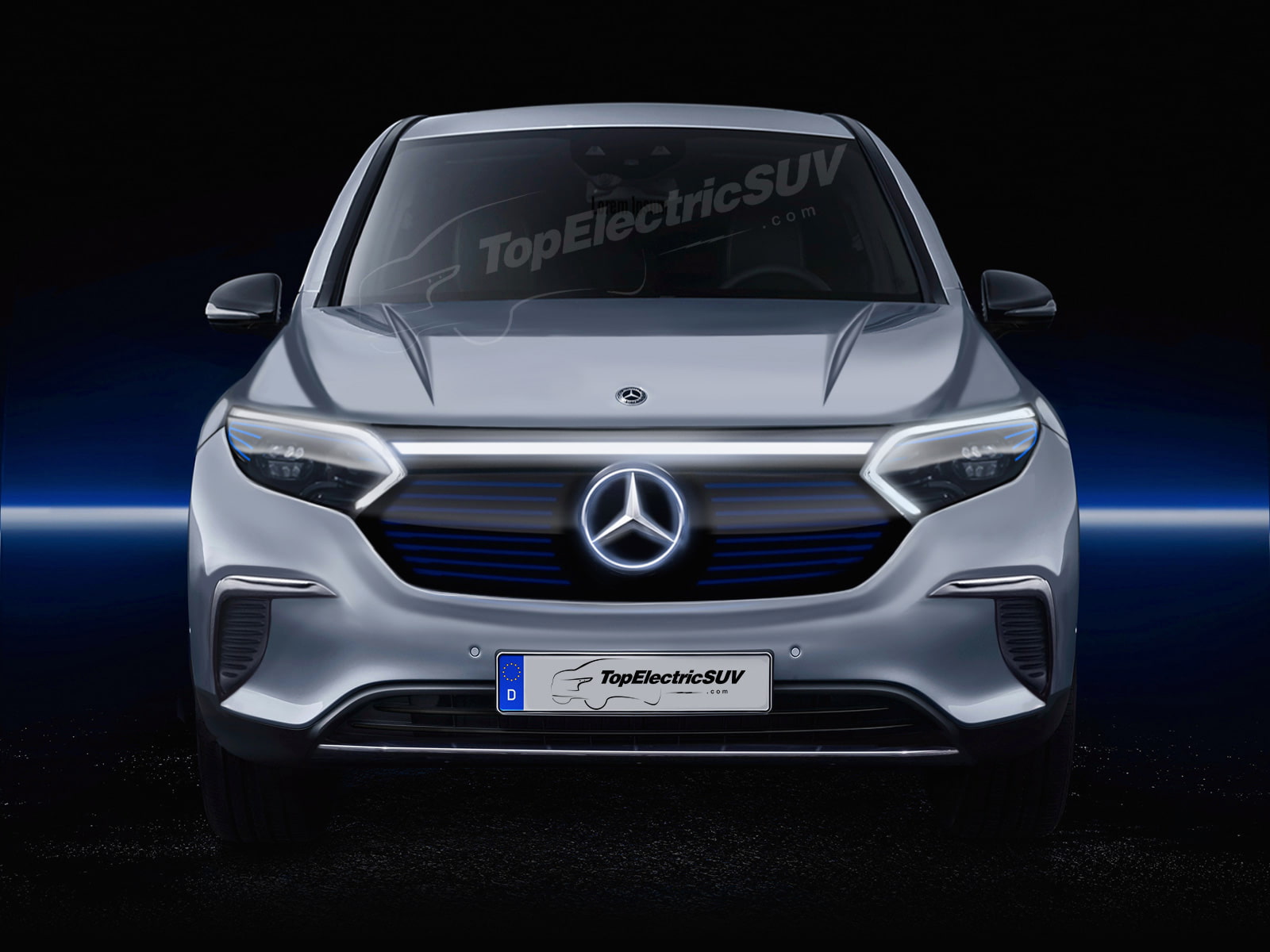 On October 6, 2020, Daimler revealed plans to add new Mercedes electric SUVs to the portfolio, including a top of the line Mercedes EQS SUV model. Based on spy shots and the teaser released by Mercedes, TopElectricSUV has constructed what we reckon is the closest look yet at the production electric SUV. In here is everything we know about the upcoming Mercedes electric SUV:

In contrast to the strategy used by the Mercedes EQA and the Mercedes EQB, the Mercedes EQS SUV won’t be a modified GLS Class with a closed fascia. A new model designed from the ground up, the EQS would look dynamic with proportions that are not possible for a combustion engine product. It would have a sleeker silhouette, a more sci-fi front and rear lights likely connected via full-width light stripes, low-profile bumpers and closed-off grille. A lower ground clearance, shorter length, lower height, more sloping roofline and a more steeply angled back glass would give it a sporty stance and the complete identity of an electric vehicle.

The Mercedes EQS SUV will likely have headlights with a DRL featuring three light dots connected via a light band. It may get a similar deep black surface (instead of a radiator grille) with tiny star patterns. While 22-inch wheels are doubtful on the sedan, the SUV will likely come with this option, with lower variants settling for 20- or 21-inchers.

The Mercedes EQS SUV interior would be remarkably different from the GLS or even the S-Class. Daimler would replicate the EQS sedan’s cabin with SUV-specific touches.

The Mercedes EQS SUV will feature the MBUX Hyperscreen, an optional highly digital dashboard that will debut in the sedan this year. A large, curved Gorilla Glass surface would stretch nearly the entire width and mount three displays (driver display, central display, and passenger display) beneath it. The central and passenger displays would be OLED units.

The MBUX Hyperscreen with its full-width (141 cm/55.5 in.), curved 3D glass cover, and the three flush-mounted displays blending seamlessly brings a whole new in-car user experience. The central and passenger displays are OLED units. Almost every vehicle function, from entertainment to connectivity, navigation, massage, energy management, and more, is at the fingertips.

Introducing the MBUX Hyperscreen, Vera Schmidt, Head of Mercedes-Benz Advanced Digital Design, said that it is a “milestone” in the combining of analog and digital design. “For me, the Hyperscreen’s clear, minimalist design, and strong anchor points make it intuitive and straightforward to use, she said.

The MBUX High-End Rear Seat Entertainment Plus package ensures chauffeured owners stay connected. It has two 11.6-inch displays comprising touch controls on the back of the two headrests. Optionally, the MBUX rear tablet is available.

The EQS SUV will come with a large HEPA filter (High Efficiency Particulate Air) eliminating pollen, fine dust and minute particles from the cabin. Special activated charcoals filter out nitrogen oxides, sulphur dioxide and odours. Expect the Burmester surround sound system with 15 speakers with a total output of 710 watts to be used on the EQS SUV as well.

Rear-seat passengers would also be able to experience a highly digital interior, thanks to MBUX High-End Rear Seat Entertainment Plus. In the EQS sedan, this feature consists of two 11.6-inch touchscreen panels mounted on the backrests of the front seats. One can expect the availability of an MBUX rear tablet with downloadable Android apps. The Hey Mercedes voice assistant will be operable from the rear as well.

Wagner told Autocar that virtual exterior mirrors are more aerodynamically efficient, but they aren’t a smart idea. They eat up so much power that they don’t make sense, “especially on electric cars,” the world-renowned car designer said.

Daimler is developing the EQS SUV on a dedicated electric skateboard architecture called Electric Vehicle Architecture or just EVA in short that debuts on the EQS sedan. This platform allows “exceptionally quiet ride”, and presumably also a clever interior packaging for more space in dimensions similar to or smaller than an equivalent combustion engine model.

Daimler has confirmed that the motors of EVA platform can generate up to 500 kW or 670 horsepower, drawing power from a battery pack with energy storage capacity of up to 107.8 kWh (net). As it is the flagship car, expect the Mercedes EQS SUV to boast the best possible figures. The EQS sedan will come in 245-385 kW (328-516 hp) power variants and have a restricted limited top speed of up to 210 km/h (130 mph).

The Mercedes EQS range is 770 km or 478 miles as per the WLTP test cycle. In the Mercedes EQS SUV, it should be possible to travel non-stop from Munich to Berlin or from LA to San Francisco. The EPA-estimated range would lower than the WLTP range. The SUV, due to the taller and wider body, won’t be as slippery as the sedan, which is now the most aerodynamic car in series production (0.20 Cd).

The global production of the Mercedes EQS SUV and Mercedes EQE SUV, however, will take place in the USA given the high demand forecast for premium electric utility vehicles from ‘legacy’ car companies and electric vehicle startups this decade in the local market.

In an announcement in December 2020, Daimler said that it plans to manufacture the Mercedes EQS SUV at the Tuscaloosa plant (Alabama) from 2022. The American factory produces the GLE, the GLE Coupe, and the full-size GLS. The company also plans to make the battery packs of the US-built Mercedes EQ SUV models locally.

Daimler filed trademark applications for the names EQE 250, EQE 43, EQE 53, EQE 55, and EQE 63 in Europe last year. We expect the EQS SUV to have a similar variant series.

While the unveil of the EQS SUV is in 2022, it wouldn’t surprise us if a near-production concept or the production vehicle’s exterior breaks cover at IAA 2021 (2021 Munich Motor Show) that falls two years after the EQS concept’s premiere. IAA 2021 is scheduled from September 6-12.

What is the Mercedes EQS SUV release date & price?

What will be the Mercedes EQS SUV range?

The Mercedes EQS SUV range (EPA) is expected to fall between 320 and 350 miles.

What are the projected Mercedes EQS SUV rivals?

The Lucid Gravity & the Electric Hummer SUV would be the EQS SUV’s challengers in the United States. 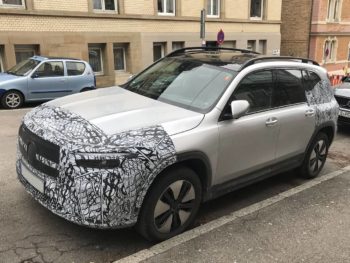 An official announcement or teaser hasn’t come up so far, but the regional event is too big for Mercedes to not display its new wares. 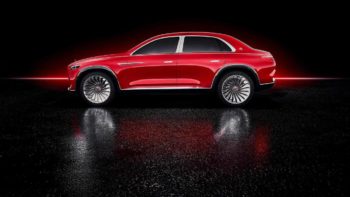 The Mercedes-Maybach SUL, Sports Utility Limo, could be launched as an exclusive electric vehicle in 2023. 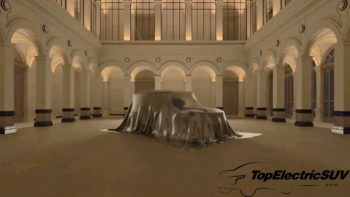 The Mercedes EQG is quite far from the market, but trademark applications may have revealed the variants.