The Lucid Gravity project is running as per schedule, suggests Derek Jenkins, Senior Vice President of Design, Lucid Motors. Answering a question about future programs in an Instagram chat with Rosemary Square – West Palm, Jenkins said, “that development is moving along really well.” He talked about the design of the upcoming model as well, which we have covered in the first section of the story.

I’m excited, very excited about the project. I think that even though the sedan segment is still a very popular segment, the SUV/CUV segments, especially in luxury, are continuing to grow at a much higher pace. So, we’re super-excited to bring that vehicle on the road.

Here’s the down-low on the Lucid Gravity, which will rival the Tesla Model X:

The Gravity is arguably the finest nexus between an upright, boxy SUV that appeals to purists and an elegant crossover. It’s essentially a different top hat on a sedan (Lucid Air), one that is fully reimagined, which can’t be said of the Tesla Model X. Here’s Jenkins providing details of the first Lucid SUV on April 19 in a chat with Rosemary Square – West Palm’s Instagram channel:

I can promise you a few things, that it will have the Lucid design DNA, so it should be instantly recognizable as a Lucid product and sit comfortably next to the Lucid Air. And we’ll put a big priority on the same values that Air has, and that’s in the areas of space, interior space, overall vehicle efficiency and range, and of course, incredible performance.

Lucid Motors, founded as Atieva in 2016, didn’t provide us a complete look at the Lucid Gravity or Project Gravity during the announcement in September. Thanks to patent images, which have surfaced from EUIPO, we can see the Gravity from all angles.

The Lucid Gravity teased last year was a near-production concept. Since Lucid Motors hasn’t given its SUV a proper reveal yet, it’s hard to say if the patents are of the road-ready version. However, as was the Air’s case, the Lucid Gravity spec heading to dealer showrooms in about two years should look nearly identical to the initial model.

The patent images show the Gravity featuring sleek headlamps similar to those of the Lucid Air, a visibly short hood (with air vents), and a huge windscreen. On the sides, the electric luxury SUV has a horizontal beltline, sleek yet wide windows, and quarter glass panels, a really flat roof, and squarish wheel arches. The fast A-pillar angle pushes the windscreen quite forward for a very sporty look. The slim and sharp tail lamps are connected via a light strip on the top at the rear. Up top, almost the entire portion is covered by the sunroof.

While concepts tend to be more appealing than their road-ready versions, it will be the opposite case for the Lucid Project Gravity. That’s what Peter Rawlinson, CEO & CTO, Lucid Motors, indicated while speaking at the BofA Securities 2021 Automotive Summit held in March.

These (teasers below) are our sneak-peak preview shots. We’ve actually changed the design a bit since then and it’s much cooler, even cooler again. And we’re really going to reimagine what an SUV can be, using this Space Concept, bigger on the inside, more compact on the outside, to make a three-row super, super sporting, all-electric SUV with great range and great characteristics.

2. What is the Lucid Gravity based on?

The Gravity, or Project Gravity as it is currently, will be based on Lucid Air’s platform, announced in September 2020. This would put the Gravity on the Lucid Electric Advanced Platform (LEAP). Combined with the Lucid Space Concept, which minimizes the in-house developed EV drivetrain to optimize cabin space, the second Lucid car is expected with class-leading interior space and comfort.

The Lucid Gravity would incorporate the posh design language set by the Lucid Air, but with typical SUV traits like upright front and rear fascias, straight body lines, squarish fenders, large greenhouse, etc. Jenkins has told hotcars.com that the Lucid Air’s design DNA is suitable for a utility product like the Lucid Gravity. He also said that the company is working on “a range of products” with the same design philosophy.

However, rival Tesla has already started rolling out 250 kW charging capability, which is expected to offer nearly 1000 miles of range in an hour. Only time and a real-world test can put the claim to rest!

4. Is it the world’s most powerful electric SUV?

The Lucid Gravity three-row SUV would be considered as a family hauler and inter-city traveler by American car buyers. So, the travel range really matters, and that’s on top of the mind of the team designing and developing it.

In an interview with Automotive News last month, Jenkins was asked about customer expectations from a luxury electric SUV. SUVs are used for many daily tasks and even adventure trips and getaways, so a long-range is what customers want out of their SUVs, even here in the luxury segment.

That range topic, I always put that at the very, very top of the list. To me that means 400- miles plus. You know, it has to have that at a minimum because people are going to use this thing. It’s going to be a family workhorse in a lot of cases.

5. It gets race proven, compact battery pack and largest ‘frunk’

Lucid says it has developed a 113 kWh battery through electric racing with 20 million miles of real-world testing promising ‘world class’ energy density. The large capacity battery will take up limited space to liberate more interior space, the manufacturer said. We expect further details of this battery when deliveries of the Air commence.

This battery’s size has also led to the Air featuring the largest frunk (trunk space at the front due to the absence of an engine) of any electric car to date. With the larger dimensions of the Lucid Gravity SUV, we expect the frunk to be much larger than that of the Air (280+ liters or 9.9 cu.ft).

The Lucid Gravity is sure to inherit the Air’s advanced driver-assistance system (ADAS), dubbed Lucid DreamDrive, which the carmaker says features a Driver Monitoring System (DMS) with 32 sensors, covering vision, radar, and ultrasonics, plus the world’s first standard high-resolution LIDAR in an EV. With geo-fenced HD mapping, the Lucid electric car will provide Level 2 and Level 3 driver assistance technologies.

Lucid has developed a new Micro Lens lighting system, which is the brightest lighting system ever made. The user can also digitally steer the light in different directions to light up dark spots on the road. The system will be available on the Air sedan too.

8. What will be the price of the Lucid Gravity?

9. What is the Lucid Gravity release date?

The Lucid Gravity is scheduled to enter production and go on sale in 2023. Claimed to “redefine” sport and luxury for SUVs, the seven-seater will be launched as a 2023 model. It will roll out of the same American factory located in Casa Grande, Arizona, as the Lucid Air that goes on sale in the second half of this year. “Project Gravity is going to go into our factory in Arizona in 2023,” Rawlinson said at the BofA Securities 2021 Automotive Summit.

In addition to the GMC Hummer EV SUV and the Tesla Model X, the Mercedes EQS SUV due next year, the Range Rover Electric and the Cadillac Escalade Electric will compete with the Lucid Gravity. 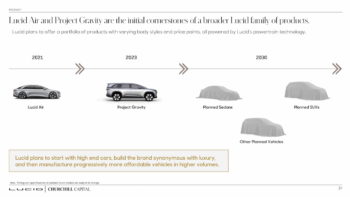 In 2022, Lucid Motors will launch a Tesla Model X rival – the Lucid Gravity, and a few years later, it plans to release a Tesla Model Y rival.