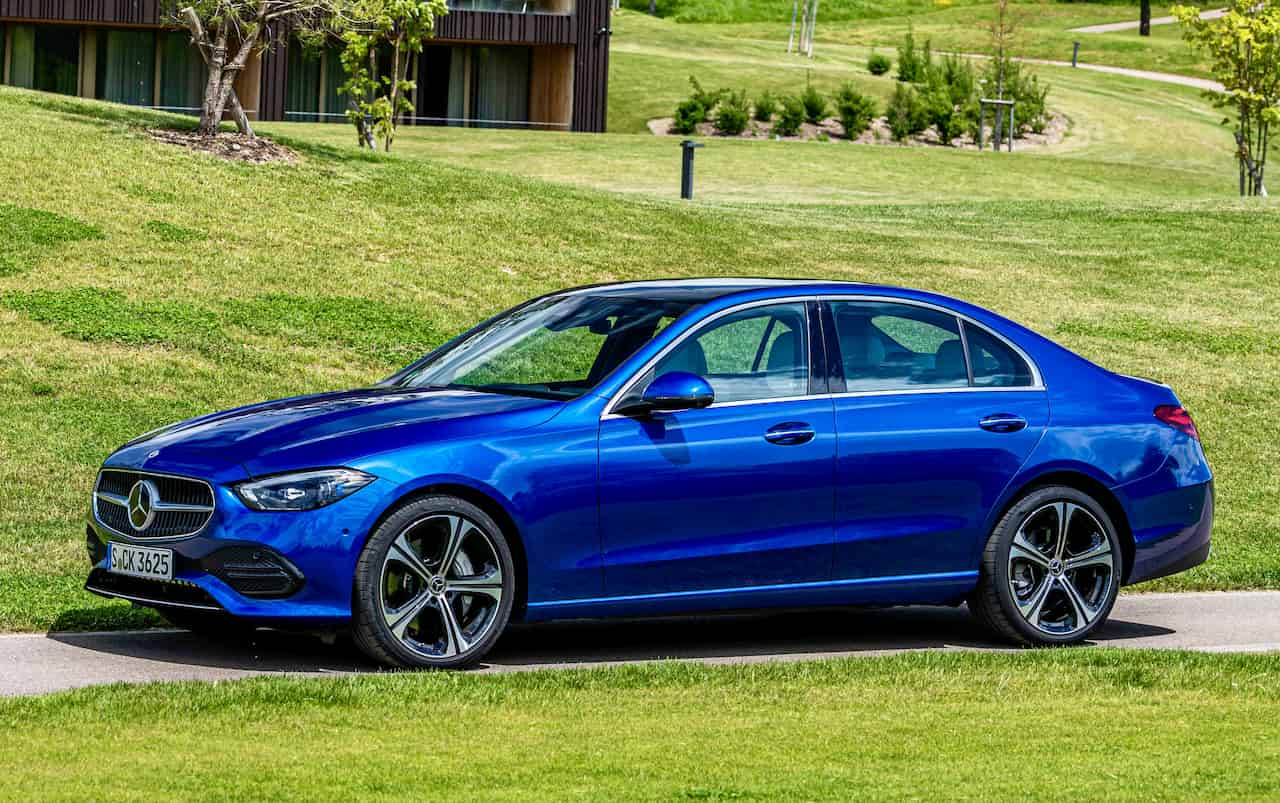 The Mercedes C-Class has been among the most popular models offered by the Stuttgart-headquartered brand. The model has existed for almost 30 years, having undergone five generations of upgrades and evolution. And now, for the first time, a Mercedes C-Class electric is in the pipeline. Automotive News reported in October 2021 that Mercedes-Benz dealers in the U.S. have received a confirmation that an electric C-Class is headed to America, along with the next generation EQC SUV, which would rival the Tesla Model Y.

Every Mercedes model to get an Electric option

Mercedes-Benz will fast-track its EV program to offer electric models in every segment. Mercedes-Benz Group CEO Ola Kallenius broke this news during the ‘Mercedes-Benz Strategy Update: electric drive’ on 22 July 2021.

By 2025, our customers will be able to choose an all-electric alternative for every model we make.

The electric equivalents of the E-Class and the S-Class have taken the EQE and EQS badges. With Mercedes already using the EQC on its GLC-equivalent electric SUV, it could rejig the nomenclature and term the next generation EQC as the EQC SUV, leaving the EQC nameplate for the Mercedes C-Class Electric.

When the Mercedes Vision EQXX was revealed in January 2022, Mercedes-Benz Group also offered the first real look at the EV-only MMA platform. Mercedes announced that the concept car’s features would make it to production models. The same was confirmed by a Mercedes spokesperson while talking to Move Electric. CTO Markus Schafer stated that the production version would be one of the most efficient EVs on the planet. Gorden Wagener, Chief Designer at Mercedes-Benz, noted that the Vision EQXX was one segment lower than the EQE—meaning the concept would spawn a production Mercedes C-Class electric.

Mercedes-Benz may standardize the battery systems across its range, with cell chemistry and height being the only differentiating characteristics. The Mercedes C-Class electric may benefit from this approach, similar to VW Group’s Unified Cell strategy. Mercedes-Benz engineers are improving energy density from 550 Wh/l to 900 Wh/l by using a silicon-carbon composite in the anode. The 550 Wh/l energy density currently allows a gross battery capacity of 111 kWh on the Mercedes EQS.

As an option, the Mercedes EQC sedan could come with LFP battery packs for a lower pricing and a more stable supply. The benefits of LFP technology outweigh its downside of a shorter range compared to NMC technology in the case of lower-segment models. That’s the reason why Tesla uses it in the Model 3 today.

What’s more, the EQXX is claimed to have a drag coefficient of 0.18 Cd, two points less than the 0.20 Cd claimed for the EQS. Expect the new C-Class EV to be highly aerodynamic, aided by its smaller frontal area.

The U.S.spec Tesla Model 3 Long Range offers 358 miles of driving range, as certified by EPA. Mercedes-Benz would take a similar driving range target for the electric C-Class. Moreover, expect the C-Class EV to have RWD and AWD drivetrain configurations. The EV-only platform should also enable a system voltage of around 800 volts to ensure faster-charging speeds, high performance, and a reduction in weight and installation space for the wiring harness. Expect charging rates of 350 kW with 0-80% charging time of 20 minutes.

Mercedes says the 900-volt battery of the EQXX features ‘active cell balancing’ that discharges all cells equally for improved efficiency while cruising. The Move Electric report also states that the battery capacity of the EQXX is 50% the size of the EQS (107.8 kWh) and weighs 35% lighter at 495 kg. It is supplied by Chinese battery OEM CATL.

Last year at our strategy update, we told you about eATS 2.0, an in-house developed and built motor that will be key to the forthcoming MMA architecture. eATS 2.0 will have an outstanding performance, as part of an 800-volt powertrain with a silicon carbide inverter. eATS 2.0 is a radial permanent magnet motor, designed for the majority of our key products.

The EQC Sedan may come with a solar roof, which we saw on the Vision EQXX. Mercedes-Benz CTO Markus Schafer said that “customers will probably have the choice in the future to opt for solar roofs,” according to an Autoblog report. On the Vision EQXX, the solar roof takes the load off the battery by providing up to 16 miles of extra range. This technology would improve further by mid-decade to a point where more range can be added by harnessing the sun’s rays.

The C-Class electric could feature a multi-source heat pump similar to the one previewed in the  Mercedes Vision EQXX. This heat pump recovers waste heat from the drivetrain, plus it has an external heat exchanger (not included in older Mercedes-Benz heat pumps) that draws heat from the ambient air. The external heat exchanger increases the operating temperature range and helps heat up the cabin quickly. The new heat pump can make use of every last bit of heat.

The “Hey Mercedes” voice assistant will likely function better. It may come in an improved version that is even more capable of dialogue and learning and feels more human-like. It may even understand more languages than it does in the current C-Class, in which it supported voice commands in German, Chinese, American English, and British English initially.

The C-Class EV would feature the new ‘Mercedes me Charge’ Plug & Charge function. At public charging stations supporting Plug & Charge, including Electrify America points, customers would conveniently start charging their electric sedan without needing to go through any manual input for authentication. The car and charger would communicate automatically via the charging cable. Plus, the payment would also happen automatically through the preset payment mode.

The EQC Sedan may get many new and improved features over its life with updates pushed over the air. Moreover, customers will likely be able to enable features with permanent/time-limited activations or subscriptions anytime during the ownership, days, months, and even years after the car leaves the factory and reaches them.

Another optional extra in the C-Class electric could be Active Ambient Lighting which can visually support warnings of the car’s driving assistance systems with color feedback. This new mood lightning system may give color feedback even when operating the climate control system, “Hey Mercedes,” and the Energizing Comfort programs.

The C-Class electric will likely feature Digital Light headlights with projection function. The headlights would be able to project auxiliary markings or warning symbols onto the road in HD quality, making the car even safer.

Bi-directional charging has started to become a new normal feature in EVs, and that push is coming mainly from Hyundai Motor Group’s Hyundai, Kia, and Genesis brands. BMW Group and Volkswagen Group are also working on deploying this technology in their EVs, and there’s no chance Mercedes-Benz Group would stay behind, that too in a car this important globally. Bi-directional charging may allow charging other pluggable EVs (PHEVs and BEVs), powering external equipment like power tools and electrical appliances, and even sending back power to the grid. The functions available may vary as per the market.

The Tesla Model 3 is already the default choice for customers looking for a premium electric sedan in the D-segment. Future European D-segment rivals of the Mercedes C-Class electric include the Neue Klasse-based BMW i3 and the Audi A4 e-tron (Audi E4).

What are the future Mercedes C-Class Electric rivals?

The Mercedes C-Class EV would compete with Tesla Model 3, BMW 3 Series electric, and the Audi A4 e-tron.

When will the Mercedes C-Class EV be released?

The Mercedes C-Class electric is expected to debut in the first half of 2025.

What is the expected range & price of the C-Class Electric? 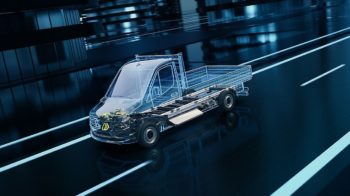 The next-gen eSprinter, based on the newly developed Electric Versatility Platform, is set for launch in 2023. 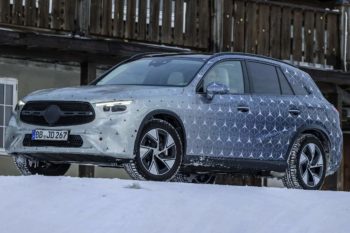 The 2022 Mercedes GLC will premiere on June 1. We take a look at what we know about the crossover-SUV sibling of the new C-Class.