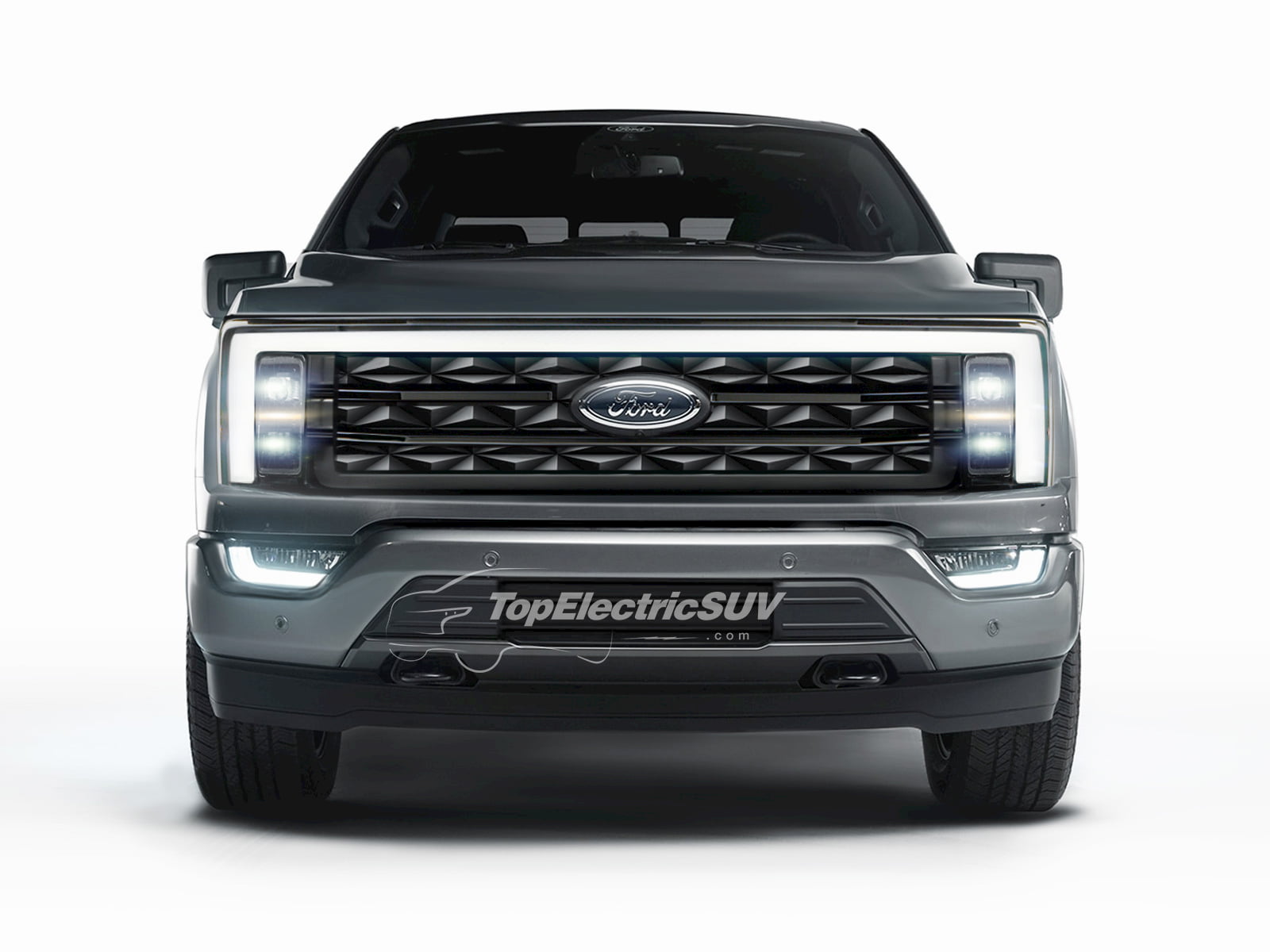 The Ford F150 Electric (Ford F-150 EV) will be launched in the first quarter of next year. That’s confirmation coming straight from Ford, and it connotes that the Blue Oval could start taking orders in early 2022.

During a conference call to discuss Q4 2022 and full year 2020 results with J.P. Morgan Securities, Hau Thai-Tang, Chief Product Platform & Operations Officer, Ford, talked about the company’s upcoming EV launches. Thai-Tang said that the e-Transit is “going to be launching in Q4 (2021).” “And then in Q1 of next year, it’ll be the F-150 BEV.” In September last year, the company had announced the production of the all-electric F-150 is scheduled to commence by mid-2022.

Last month, based on a recent NHTSA document, it was rumored that the Ford F150 Electric (codename: Ford P702 BEV) could be launched as the Ford E-150. However, Mike Levine, a Ford spokesperson, quickly quashed speculations by taking to Twitter the same day. The brand 2021 Ford E-150 could be reserved for a Ford Econoline van, he hinted.

Research indicates that familiarity matters a lot for electric pickup truck customers, and so, Ford would prefer a suffix on derivatives of the F-150 instead of replacing the brand.

The Ford F150 Electric might have the potential to become the best-selling electric pickup truck in the U.S., suggests the findings of a Cox Automotive research. According to the study, 60% of consumers find the F-150 Electric more appealing than the GMC Hummer EV, the Rivian R1T, and the Tesla Cybertruck.

Cox Automotive conducted an online survey of 155 prospective customers of pickup trucks, 60 of whom wanted to buy an electric pickup truck. 59% of the participants found the Ford F150 Electric the most attractive. 45% of the respondents said that they would consider this electric pickup truck over the other three once its details are out. You can read more about the study on coxautoinc.com.

Here’s everything we know about the Ford F-150 Electric so far:

The Ford F-150 electric pickup truck will have a unique identity to stand out from the wide range of gas-powered Ford F-150 models, while still recognizable as an F150. It will feature a noticeably different front fascia, one that expresses the eco-friendly and high-tech nature of its powertrain. Our exclusive rendering gives a fair idea of the look of the new electric pickup truck.

Key to its unique face will be the front light structure and grille design. Like the official teaser (below), the rendering shows an end-to-end LED light bar that forms a gate-like visual component. The main lights will be positioned in a vertical layout like on the ICE variant but in a more sophisticated and narrow assembly. A thin LED marker light could bifurcate the light assemblies.

The area between the front lights will have a closed-off parametric grille surface with triangular jewel-like structure. In the lower portion, the new electric pickup truck may feature a ‘shut’ lower air intake but the same bumper and fog lamp housing as the standard variant.

In recent news, a newly discovered patent application suggested that the Ford F-150 electric could have a range extender option. A range extender feature would banish range anxiety and make the new electric pickup truck a practical model regardless of the trip.

The patent application shows the range-extender in an electric pickup truck with an internal combustion engine positioned within the cargo space. “The generator may be positioned within the truck bed, such as near the front wall,” says the description of the patent application. “In an embodiment, the generator is shaped like and therefore disguised as, a toolbox,” it adds.

Ford wants to have a swappable and modular generator to accommodate the energy needs of every customer. The generator would house an engine or other power source, a fuel tank, an exhaust system and various electronics. The mechanical energy created by the engine can be used to either supplement the electrical energy generated by the motors or to output power for charging the battery pack.

Ford broke ground on the Ford F150 Electric plant in Dearborn and announced several new details in October. The company is marketing the electric F150 as the most powerful F-150 yet.

In December, Ford released a short video of an F-150 electric pickup truck prototype enjoying the snow. The video showed a Ford F150 prototype drifting on the snow and showing off its off-roading capability along with a prototype of the Ford Mustang Mach-E electric SUV.

The Ford F150 electric will feature dual motors that should generate more horsepower and torque than any Ford F-150 on sale today. The Blue Oval is promising the fastest acceleration and the ability to tow heavy trailers for the new electric pickup truck.

In a Car And Driver test, the previous generation Ford F-150 (Limited trim) accelerated from 0-60 mph in just 5.1 seconds, and so, the new generation model’s all-electric variant could do the same in five seconds flat or quicker. In another teaser video (below), Ford had shown off a prototype climbing a 60% grade hill with ease. As for the towing capability, the Blue Oval had demonstrated a prototype towing 10 double-decker rail cars and 42 2019 F-150s, weighing more than a million pounds, in July 2019.

In addition to impressive performance parameters, Ford is pitching high practicality and affordability as facets of the electric F-150. The company says that it will feature a giant front trunk or ‘frunk’ which will increase the cargo space significantly. The truck will support OTA updates that bring enhancements in various aspects conveniently. The less maintenance than a comparable gasoline pickup truck would help customers save more than 40% on the total cost of operation over its lifetime.

The Ford F150 electric would feature new advanced in-cabin technologies that offer more convenience. It will be capable of OTA updates, James Farley, President and CEO, Ford, said during the Q3 2020 earnings call on October 28, 2020. Farley added that its upcoming EVs, the F-150 electric and the Transit electric, will offer unique digital services. Ford is calling these models Fully Networked Vehicle, otherwise known as FNV.

Ford has not disclosed even an estimate of the Ford F-150 range, and the battery pack capacity and layout are under the wraps at the moment. Kumar Galhotra, Vice President and President, Ford (North America), has told fordauthority.com that the battery chemistry utilized for the Ford F-150 electric would be different from that in the Mustang Mach-E and Transit EV. The company may use a skateboard configuration to house the battery pack and all other core components in the chassis. In that case, it may need to use an underbody armor to protect them, especially during off-roading situations.

What is the Ford F150 electric release date?

Mid-2022 is when the Ford F-150 Electric deliveries are likely to begin.

Which pickup models would be considered Ford F150 Electric rivals?

The Ford F-150 Electric will challenge the Chevrolet BET Truck that will offer a range of more than 400 miles.

What will be the Ford F150 Electric price?

The Blue Oval will make the Ford F-150 Electric at a new manufacturing plant – Rouge Electric Vehicle Center, which is currently under construction. “This zero-emission F-150 will be on the road two years from now,” Bill Ford, Executive Chairman, Ford, said at the groundbreaking ceremony of this plant on September 17, 2020.

Ford plans to have a high-tech manufacturing setup for the F-150 electric, and one of the advanced processes in the production will include self-driving transport sleds. Gary Johnson, the company’s chief manufacturing and labor affairs officer, has told fordauthority.com that these autonomous sleds would transport the Ford F150 Electric’s bodies from one station to the next. The paintwork would happen alongside the ICE-powered Ford F-150 only, though.

James Farley said in the Q3 2020 Earnings call that the Transit and the F150 Electric would be positioned at accessible price points. He said that the productivity, capability and the cost of ownership would be very compelling for customers backed by what he terms an “unmatched dealer base” to provide service or great uptime for users.

Meanwhile Carsdirect has reported that Ford dealers that wish to sell the brand’s upcoming EVs in the United States will have to pay to become eligible. As per a letter that the company sent its dealers and Carsdirect accessed, the retailers have to invest USD 35,000 to get what Ford bills as the “next-generation” EV certification. The website does not list out what the investment is for, but it could cover the cost of installing the EV chargers and the workshop equipment to service electric vehicles.

In November 2020, Ford confirmed that there’s no plan for a Ford Super Duty electric pickup truck in the current scenario when the market is at a nascent stage. In other words, a GMC Hummer EV rival is not something the Blue Oval is considering today.

“At the moment, we do not have any plans to go into heavy-duty with battery-electric vehicles,” Kumar Galhotra, President, Ford (Americas & International Markets Group), said during a fireside chat hosted by Credit Suisse to discuss the company’s Q3 2020 results on November 2, 2020. “Our goal is to build a profitable electric vehicle portfolio,” John Lawler, CFO, Ford, said during the same event, emphasizing that the learning from the first launch would shape the contour of its future launches. 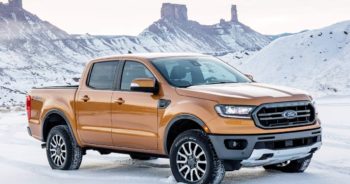 Update: The Ford Ranger Hybrid has been confirmed. It will be a plug-in hybrid, and it is expected to launch in U.S. 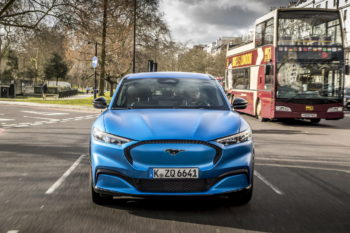 Ford plans to launch a mini Mustang Mach-e electric SUV in Europe in 2023. The company will make this EV in Germany. 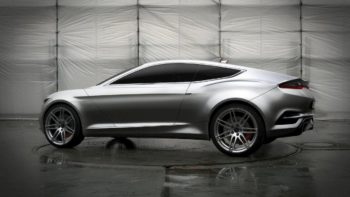 According to autoexpress.co.uk, the new Ford SUV could be launched in 2022 and come to rescue of the Mondeo nameplate which is endangered.