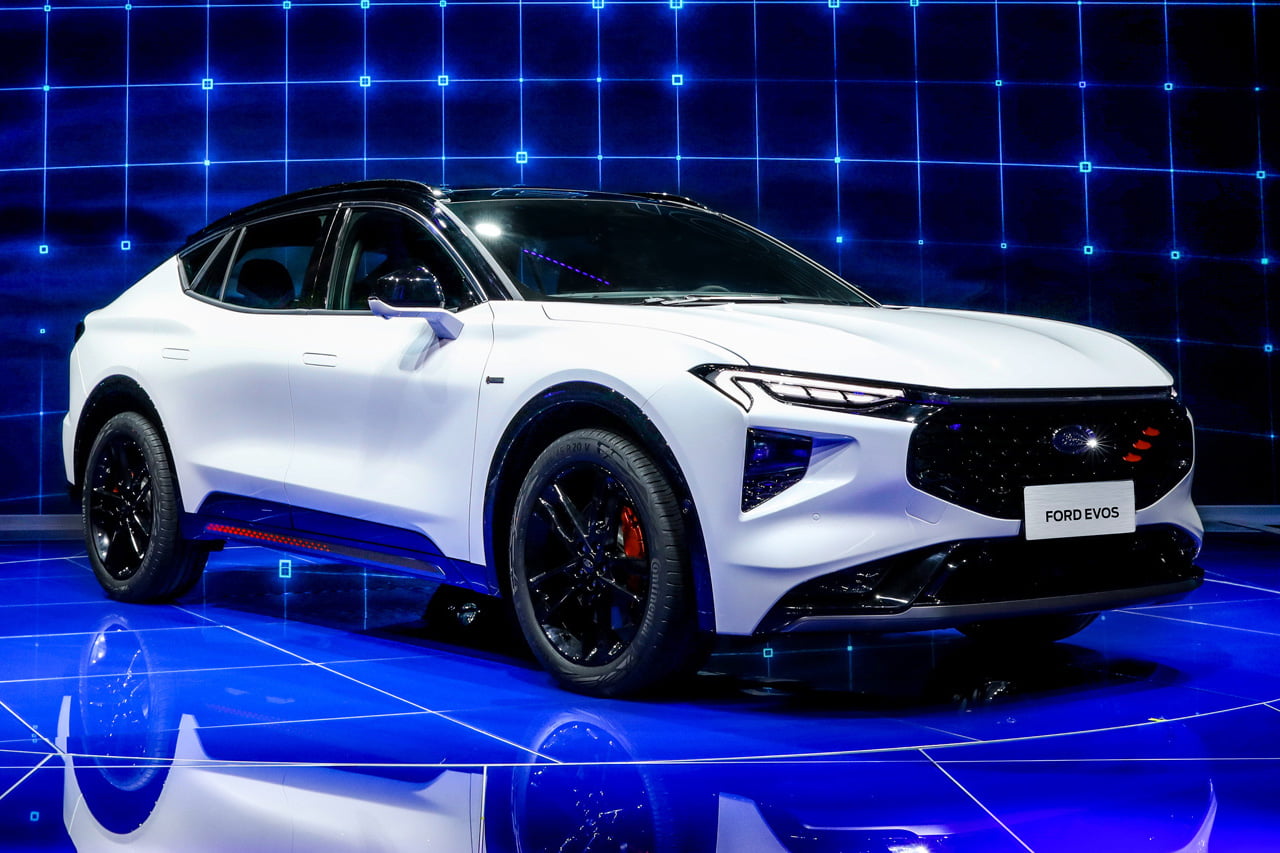 The Ford Evos Concept introduced at IAA 2011 (2011 Frankfurt Motor Show) has finally debuted in a production-ready avatar. At Auto Shanghai 2021 that opened today, the Blue Oval took the covers off the production Ford Evos destined for showrooms.

The Ford Evos is a cross between an SUV and a coupe, and it’s believed to be the successor to the Ford Mondeo/Ford Fusion. The Evos has a typical SUV coupe design, and its silhouette is quite reminiscent of the Mustang Mach-E.

At the front, the production Evos has a low-set hood and super-thin headlamps that feature an aggressive cut towards the end and merge with the wide radiator grille. There are vertical cut-out sections on the sides of the front bumper, probably housing additional front lights and faux air inlets. The lower grille has a sporty design, and so it also contributes to making the front fascia appealing.

Looking from the sides, the Ford Evos sits lower than conventional midsize SUVs, thanks to a downward-sloping coupe-like roofline and the flat-sloping D-pillars. Sleek greenhouse, flush door handles, black body cladding, and sharp crease lines in the upper portion that extends a little to the doors further enhance the styling on the sides.

The rear-end arguably looks the most dramatic, with a split roof spoiler, C-shaped wide taillights connected via full-width light strip, Evos branding in block lettering, sharply-designed bumper outer-ends, and most important of all, the raked windscreen. The exhaust tailpipe seems to have been kept hidden purposely, with a possible all-electric variant following down the road.

The interior of the Evos is minimalist, highly digital, and quite futuristic. Nearly the entire width of the dashboard is covered by two screens designed to look like one, a 12.3-inch wide instrument cluster and a 27-inch 4K ultra-wide multimedia display. With a co-driver mode, the front passenger can view the navigation data, traffic sign, and vehicle status on the 27-inch 4K touchscreen ahead of him/her. Thanks to a split-screen function, it is possible to enjoy entertainment content on the passenger-side of the ultra-wide display while other functions like navigation are used on the central/driver-side.

There’s no word on the dimensions or technical specifications, but it is reported that the Evos is planned with a hybrid powertrain option.

We’ll give this page an update when we have more information later in the day.