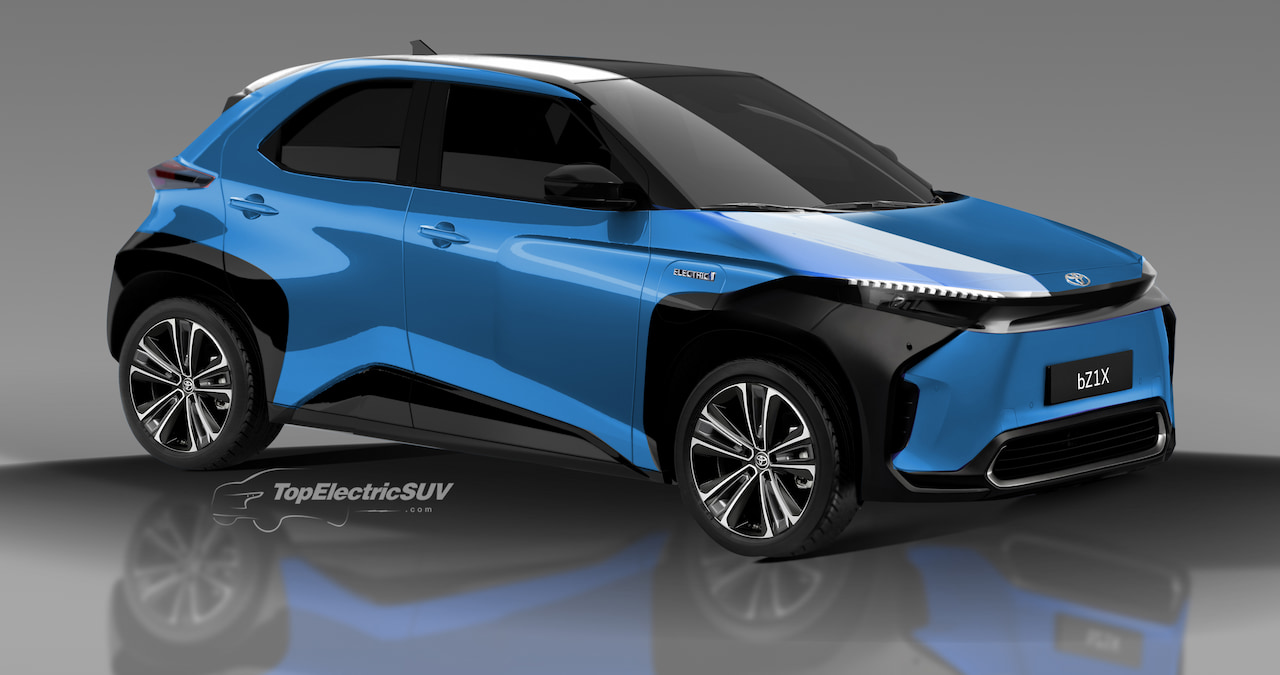 Toyota Motor Corporation surprised the global automotive fraternity in December 2021 by announcing 30 new Toyota and Lexus BEVs that are slated for launch by 2030. Among those, Toyota showcased 17 models across various body styles. In the front row was a small electric car that appeared like a Toyota Aygo EV, titled Toyota bZ Small Crossover.

New reports suggest the EV may be called the Toyota bZ1 or Toyota bZ1X. Largus.fr reported in January 2022 that the Toyota Aygo’s pure electric sibling would be called the bZ1. TMC has filed trademarks for the bZ series nameplates from 1-5 (including the ‘X’ suffix), ready for future deployment.

The Toyota bZ small crossover features a nearly identical silhouette to that of the latest generation Toyota Aygo. The bZ series EVs appear to have been crafted using razor-sharp Japanese samurai swords, and the bZ1X is no different. There’s a lot of intricate bodywork with sharp creases and character lines, closed in design philosophy to Lexus than hardcore Toyota models. However, what’s clear is that the bZ1X will have a small footprint.

This is the most compact SUV in the bZ series―a small battery EV with a comfortable interior designed with Europe and Japan in mind.

Akio Toyoda, President of Toyota Motor Corporation at the Beyond Zero Mobility event in December 2021

While the Toyota Aygo X is based on the GA-B platform—a part of the Toyota New Global Architecture (TNGA) family—the bZ1X could use a ‘mixed’ platform. While the Toyota bZ4X, the bZ1X’s larger mid-size SUV sibling, is accompanied by platform sharing cousins like the Subaru Solterra and the Lexus RZ450e, the bZ1X is likely to be a Toyota-only model.

Automotive News reported in December 2021 that Toyota is developing a new electrified vehicle platform christened E3. The platform has been developed using parts from the TNGA GA-C and the e-TNGA. If other technical solutions are not feasible, Toyota may use the in-house resources by combining Aygo’s GA-B platform with the e-TNGA modules.

As aforementioned, the Toyota bZ1X would be the smallest SUV in the bZ series, so the possibility of a large and heavy battery pack for long-range seems out of the question. The model would be appropriate for buyers looking for a friendly little city car that excels in maneuverability with a compact footprint and short turning radius. At the Beyond Zero mobility event, Toyota boss Akio Toyoda revealed that target efficiency would best-in-class at 125 Wh/km (12.5 kWh/100 km).

Largus has reported that the EV would be FWD and come with a 35 kWh-45 kWh battery, enabling a healthy 185 miles (300 km) of range. Official figures are not out yet.

Manufacturing of the bZ-series electric cars based on the E3 platform for Europe would reportedly take place at TMC plants in the UK and Turkey. The small crossover may be produced at one of these plants or at TMC’s Kolin facility in the Czech Republic, where the Aygo X is made. There’s no clarity on when the bZ-series Toyota Aygo EV would enter showrooms. It’s unlikely to happen before 2025.

Expect the EV to be priced at the affordable end of the market. By the time the bZ1X goes on sale, EV propulsion systems and battery technology will be largely democratized, and prices will hopefully be less compared to today. Toyota bZ1X price may range between EUR 15,000 – EUR 20,000 (USD 16,300 – 22,000). The Toyota will lock horns with the Dacia Spring, Peugeot e-1008, and the VW ID.1 in the second half of this decade.