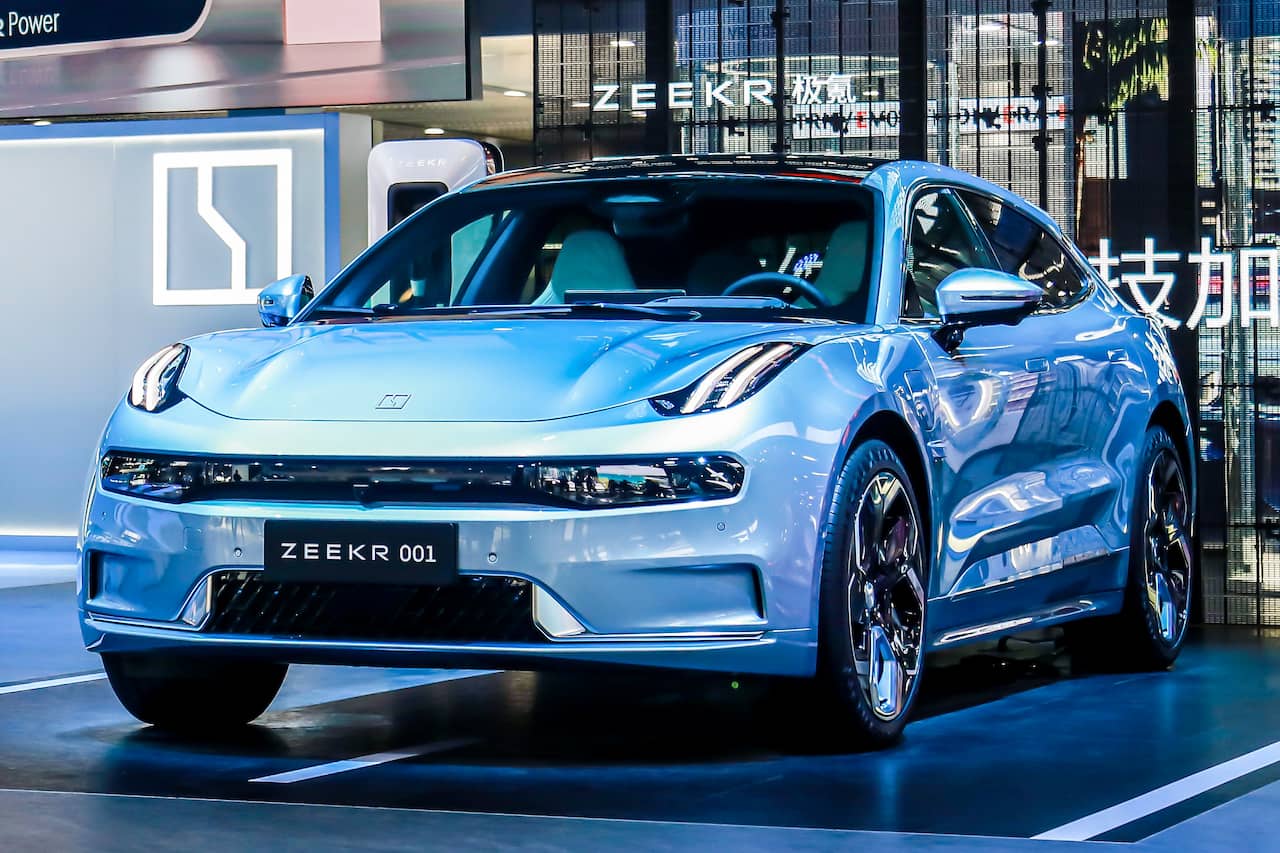 Geely Auto Group launched the Lynk & Co Zero Concept from the 2020 Beijing Auto Show in China as the Zeekr 001 in 2021. The 001 electric SUV is the first model from its new brand Zeekr (Chinese: 极氪), and it could have potential in global markets, including the United States.

On July 11, 2022, Zeekr introduced hardware improvements to the 001’s body and chassis for the 2022 model year. Moreover, the company plans to introduce a major OTA update for the EV’s driver comfort, cockpit interface, and smart driving technologies soon.

Zeekr says that the electric SUV can now “self-adapt autonomously” at speeds of up to 130 km/h (81 mph). It automatically slows down on detecting pedestrians or non-motor vehicles approaching and maneuvers the other way on detecting a car door open on the side of the road or a truck approaching on the side.

The July 2022 update has optimized 200+ key items of the Zeekr 001’s user control functions within the cockpit with the adoption of the Snapdragon 8155 7nm system-on-chip (SoC). An all-new intelligent driving system lets the driver switch between driving modes and has an EV-specific distributed traction control system. The latter has brought a 31% improvement in acceleration performance on harsh road surfaces and also snow and ice surfaces. The intelligent driving system enables users to switch between RWD, AWD, and real-time adaptive 4WD drivetrain layouts as required by the prevailing road conditions.

On March 23, 2022, Zeekr had released the Zeekr OS 2.0 to replace the Zeekr OS 1.1.1 with improvements and new features. According to a report from autohome.com.cn, the v2.0 vehicle software covers 33 ECU units. The updated version brings 5 new functions and optimizes 59 functions, too.

Zeekr had commenced pushing major OTA updates to customers on February 12, 2022. These were the highlights of the first OTA update:

To ensure that the early adopters of the brand are satisfied customers, which would help it establish a good rep in the market, Zeekr may continue rolling out periodic updates throughout the 001’s lifecycle.

According to a report from sohu.com, the Zeekr 001’s battery pack comes from CATL and Wei Rui, and Nidec and Wei Rui supply its electric drive. The report suggests that Zeekr offers a lifetime warranty for the first EV, including its tri-motor system. The battery pack consists of NI55+ cells, and Zeekr is confident that it would not catch fire on the inside in the case of a collision or engulf in flames when punctured. Wei Rui manufactures the standard 86 kWh battery pack, and Ningde produces the bigger, 100 kWh battery pack.

BorgWarner has a hand in the Zeekr 001’s thermal management. It supplies the electric SUV’s coolant heater, which helps to maintain a consistent temperature inside the battery pack and its cells. The coolant heater allows maintaining an ideal cabin temperature as well. It uses a thick film element (TFE), and its heating elements are immersed in coolant to keep the power losses in check. BorgWarner makes it in single and dual plate versions, both integrated into aluminum housings, but it hasn’t said which of the two goes into the Zeekr 001. Its power ranges from 3 to 10 kW.

According to a report xchuxing.com released on March 23, 2022, Zeekr will launch a more powerful 001 at the end of 2022. The go-faster 001 could be an upgraded version of the current top-of-the-line YOU AWD configuration or a new configuration, with a likely 0-100 km/h (0-62 mph) acceleration time of around two seconds, it is reported.

Announcing its results for the first half of 2022 on August 18, 2022, Geely Automobile Holdings Limited revealed that it plans to launch a Zeekr 001 Plus in the second half of 2022. The ‘Plus’ suffix used for the name of the 001 variant indicated that it will deliver a longer range than the standard variant, which can travel up to 732 km (455 miles) on a full charge.

Qilin batteries are based on CATL’s third generation cell-to-pack (CTP) technology. CATL says that these batteries achieve the world’s highest integration level, with a volume utilization efficiency of 72% and an energy density of up to 255 Wh/kg. They support a hot start in five minutes and fast-charging in ten minutes. The same battery technology has also been used on the Zeekr 009.

The air suspension system, standard in the YOU AWD configuration, comes from Vibrac, and Tenneco supplies the electric SUV’s electromagnetic shock absorption system. The driver can adjust the vehicle’s height in five levels and keep it anywhere between 117 and 200 mm. The ground clearance of the other two configurations is 174 mm.

The Zeekr 001 features Mobileye SuperVision, a full-stack ADAS that uses 11 high-res cameras (seven 8MP long-range and four parking) to provide the vehicle with full visual coverage of its surrounding. Powered by two 7nm EyeQ 5 SoCs, it enables hands-free driving on a wide range of road types, including urban roads. Full functioning isn’t available yet, but as stated earlier in the story, Zeekr is improving the autonomous driving capabilities of the 001 with OTA updates.

Zeekr expects to give the 001 full SuperVision capabilities with OTA updates by the end of 2022, as per a joint announcement from Geely Holding Group and Mobileye dated September 26, 2022. That announcement also revealed that more than 40,000 001s equipped with SuperVision are already on the road.

Prices of the Zeekr 001 in China start at CNY 299,000 (approx. USD 41,000). Designed in Sweden at Geely Design Gothenburg, the coupe-styled luxury E-segment SUV is also available on a subscription basis.

Zeekr Subscription, first announced in Hangzhou, allows customers to subscribe to the 001 monthly for 1-12 months. Plus, there are short-tenure options: 3 days, 7 days, and 15 days. The WE single-motor and WE dual-motor configurations are available for subscription.

TopElectricSUV understands that the Zeekr brand caters to the premium to luxury BEV segment. In contrast, Lynk & Co caters to the premium hybrid + ICE segment followed by the new mobility segment in Europe. Zeekr targets the segment that holds a monthly volume of about 50,000 electric cars in China.

Series production of the Zeekr 001 began on October 19, 2021, and customer deliveries in China commenced on the 23rd of that month. The first 50 customers got their Zeekr 001 outside the production facility in Ningbo (Zhejiang Province). On October 12, 2022, Zeekr announced that it had made 50,000 copies.

Zeekr 001 customers get to charge at dedicated Zeekr charging stations. These charging stations come under a sub-brand called Zeekr Power. By September 30, 2022, Zeekr had 512 self-built charging stations in 102 cities (excluding special-use stations), including three different types of charging stations with different power capacities. Currently, the third-party charging network covers more than 350,000 charging devices in 335 cities across the country, as per Pandaily.

In an interview with Bloomberg (via YouTube) in April 2021, An Conghui, CEO of Zeekr, revealed that the brand plans to go global early this decade. European countries are the first targeted overseas markets, and later, the United States and Canada may also get Zeekr EVs. “We will focus on the Chinese market this year, and we expect to enter the European market by the end of 2022 or in 2023,” Conghui said on the launch of overseas operations. Further, he talked about the potential U.S. launch:

North America is in our plan for the next step. That will happen after 2022. We’ll announce our plans for North America in the future.

An Conghui, CEO of Zeekr brand (Bloomberg Interview on April 15, 2021)

According to a report autohome.com.cn released on November 2, 2022, the company will announce its overseas launch plan in late November 2022. It will begin its global operations with European markets in 2023. Zeekr has two models in its portfolio – 001 and 009. It plans to introduce a new SUV and a sedan in 2023, followed by two models in 2024, expanding its line-up to six models. The company may reveal the cars shortlisted for Europe when it details the overseas launch plan.

At the 2021 Guangzhou Auto Show, Zeekr announced a new user service brand called Zeekr Care. Zeekr has set up an exclusive support team called ‘Krypton Orange,’ and users can call them 24 hours a day if they encounter a vehicle problem while driving. Zeekr Care includes a 24-hour online distress support service as well. Zeekr Care services will be available in 208 cities in 31 provinces across China.

Zeekr is reportedly developing a physical key for the 001 and plans to offer it by the end of 2022. The brand should see to it that it clears out niggles before commencing exports.

Chinese media sites reported after the Geely Auto Group announced the Zeekr brand on March 23, 2021, that the production Lynk & Co Zero Concept would become the first Zeekr model. On March 31, 2021, that’s exactly what ensued; the Zheijang Geely Holding Group’s principal auto division announced the road-ready version of the EV concept as the Zeekr 001.

Using the parent company’s SEA platform, Zeekr will launch a wide range of high-tech EVs that offer luxury-class comfort and performance. The battery technologies, battery management systems, electric motor technologies, and EV supply chain support will be their own, though.

For a fraction of the price of the Tesla Model X, the Zeekr 001 has a sporty design, phenomenal performance, high-end technologies, and a worry-free driving range. While it cannot compete with Tesla’s seating capacity or peak performance, it is a good, zero-emission choice for young drivers looking for their first high-performance vehicle.

What are the Zeekr 001 competitors?

Price-wise, the Zeekr 001 rivals the Tesla Model Y, in China. Indirect competitors include the Nio ET5 as well. 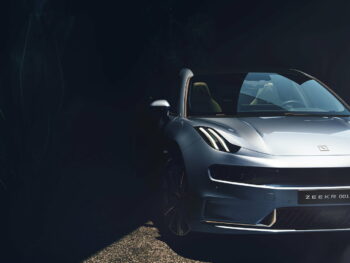 The third Zeekr EV could rival the Fisker Pear that will go on sale in 2024. 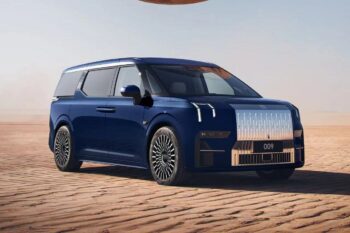 Zeekr’s second model is an ID. Buzz-like electric van that will launch in 2022.