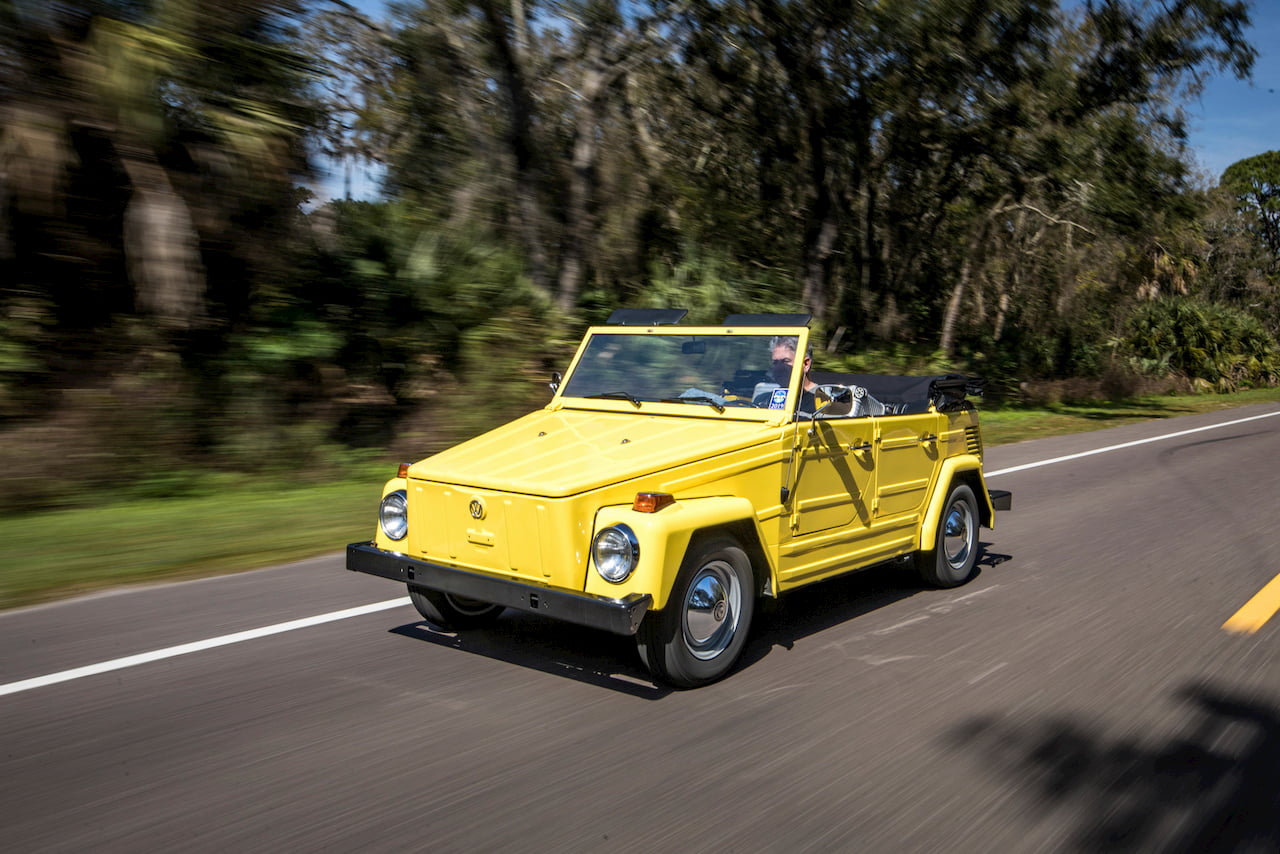 There’s growing evidence to suggest that the VW ID. Thingzz, the rumored VW Type 181 with an electric powertrain, is on the mind of Volkswagen. Volkswagen Group has registered an ‘e-Thing’ trademark at the European Union Intellectual Property Office (EUIPO) in 2021.

The VW e-Thing could be a concept, made to rejuvenate the “emotional” love of the original Volkswagen. While a trademark filing is in no way a confirmation of production plans, it is a hint that Volkswagen could showcase an early design study to gauge customer response before deciding on the project, as we explain further in the story.

Volkswagen Group has registered an ‘e-Safari’ trademark at the EUIPO, which could be directly related to the new-age VW Type 181. Perhaps the marketing team is yet to decide the final name of the expected concept.

VW Thing is returning as an EV, say British and German media reports

In August 2020, carmagazine.co.uk reported that the VW Type 181 could make a comeback this decade as an all-electric car. The British publication called the future model ‘VW Junglezz.’ Volkswagen Group has registered this trademark at EUIPO, and a foreshadowing concept could be taking shape at a VW design studio.

The VW 181, or ‘VW Thing’ as Americans remember it, turned 50 in 2019. Volkswagen Group is looking for some “fascinating” models to invigorate the ID. family of next-gen electric cars, as per autobild.de. Sure, the Bulli/Microbus makes a comeback this year, in two wheelbase versions, but that’s not it. Volkswagen has several offbeat models on the list, and one of them is a VW Type 181 successor, says the German scoop story.

The VW Thing holds a special place in the heart of the Volkswagen Group CEO Dr. Herbert Diess. The German publication says that Dr. Diess is sympathetic about the multi-purpose 4WD vehicle from the World War II era. The VW 181, originally a military vehicle officially known as the VW Kurierwagen (courier car), was a Kubelwagen spin-off. The German army had commissioned it, and production began in October 1969. Over 80% of the entire output of the cross-country vehicle was meant for civilian market sales.

This isn’t the first time we hear of the VW Type 181’s comeback. In November 2017, Diess told autocar.co.uk that “the next decision (after the mainstream VW ID. models) will be what kind of emotional concepts we need.” Explaining what he meant by “emotional concepts,” Diess had clarified that the term covers iconic Volkswagens such as the Microbus, Beetle, Kubelwagen, and Buggy.

If relaunched, the VW Thing may come in single-motor RWD and dual-motor e-AWD variants. The original model had an easy-folding PVC top, but the next-gen could feature an electrically foldable roof made of new-age material that is sustainable.

Recently, Dr. Diess talked about the company’s plans to introduce electric versions of classic models. A Beetle EV and “some other emotional cars in our history” are under consideration, the Volkswagen Group boss said. The retro cars Dr. Diess was referring to probably included the VW Thing.

I’m really excited about another product which is not as famous in China, which is the (ID.) BUZZ. And after launching this, we have probably better experience how we can bring our this emotional, traditional world of Volkswagen into the EV sector. And then it would be easy to also do other emotional (models). We have been thinking about Beetle, yes. We have been thinking about Dune buggies, or some other emotional cars in our history.

The market release of relatively low-volume VW ID. series models would be during the second half of the decade. Volkswagen Group plans to commercialize a new mechatronics platform called the SSP in 2026, and it may build niche models like the electric VW Thing on this base. As Volkswagen Group puts it, the SSP platform will be the successor to the MQB, MSB, MLB, as well as MEB and PPE. There will be four versions of the SSP platform: SSP 1, SSP 2, SSP 3, and SSP n, covering all vehicle segments.

Before the VW Thing EV, Volkswagen Group could bring two electric convertible cars that are simpler to manufacture, have a higher relevance globally, and possess a greater sales potential. According to a report from Suddeutsche Zeitung, these could be a Volkswagen-branded model and an Audi-branded model – both manufactured in Osnabruck, Germany. The former should be the VW ID.3 Cabriolet teased by Diess on Twitter in March 2021, and the latter, an Audi A3 Cabriolet successor.

The customer reception to these convertibles and the VW ID. Buzz would decide whether or not Volkswagen produces a more niche model, like the Kubelwagen. What we know for certain is that the Volkswagen Group is keen on such models. Diess has that the company needs “emotional products” during the EV era.

Icon, a Los Angeles-based car restoration specialist, is not waiting for confirmation from Volkswagen to make one of their own! Icon converted a 1974 VW Thing into an EV as the first project of its kind. The company has kept the design almost completely original, in the exterior and interior.

The 1974 VW Thing EV makes use of an electric motor mounted at the rear. It develops a healthy 150 kW or 210 horsepower and 280 pound-feet of torque using energy from a 38 kWh battery pack consisting of Lithium LiFePO4 Enerdel batteries. A Rinehart water-cooled controller manages the electric motor.

The converted VW Thing EV from Icon has an Orion dual-BMS with a 3 kW on-board charging system. The battery pack lies in the front, while the charging port is in the rear bumper. The built-in charging port conforms to the SAE J1772 standard, and so, it supports Level 1 and level 2 home/public charging stations. A full charge gives the VW e-Thing range of 80-100 miles, and the conversion cost is USD 120,000.

Volkswagen Group to ramp up EV efforts in the U.S.

U.S. President Joe Biden has proposed a USD 7.5 billion investment towards America’s transition to EVs by building a strong EV charging infrastructure. Buoyed by Biden’s pro-EV measures, Volkswagen Group is relooking at its EV strategy for the U.S. That’s according to a Bloomberg report, which says that Volkswagen brand’s R&D chief Thomas Ulbrich told reporters in Germany in June 2021 that the company is working on an updated U.S. EV strategy.