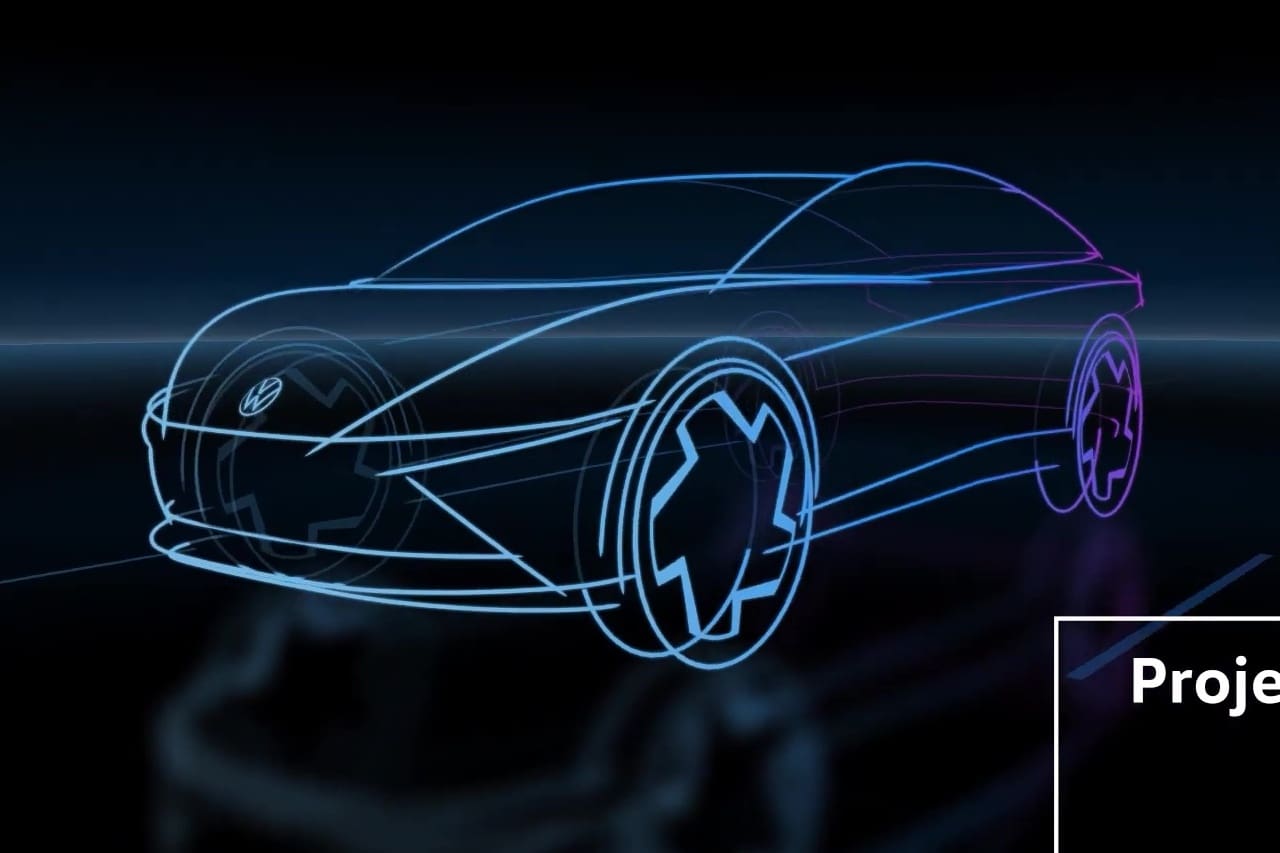 Volkswagen looks fully committed to its EV offensive this decade. After launching a range of ID. series of EVs around the B- and C-Segments, the VW Trinity (Project Trinity) is expected to arrive by 2026, perhaps with an SUV version in tow (via Automobilwoche). Currently referred to as the VW Trinity project, the brand teased the silhouette of the new sedan in 2021. VW will add up to 7 new EV models by 2027.

Earlier there were rumors that the VW Trinity project-derived sedan will take on the VW ID.7 branding. According to a report Autocar published on June 9, 2022, it will actually break cover a the ‘VW ID 4.’ An SUV with the same name exists today in the VW line-up, but the company has decided to create model lines based on size. Effectively, the ID.4’s name could change to ‘ID.4 SUV’ in the future, and if not, the future car from the Trinity project could arrive as the ‘ID.4 Sedan.’

Volkswagen has said that the VW Trinity project car will be a “flat, sporty sedan” which would set new benchmarks in terms of range, charging speeds, and digitalization. Volkswagen Passenger Cars CEO Ralf Brandstätter describes the VW Trinity as a lighthouse project and a software dream car.

The VW Trinity is probably ready for its debut in the concept version. Auto Bild editor-in-chief Tom Drechsler saw the covered vehicle while interviewing Brandstätter in Walhalla in November 2021. Walhalla is Volkswagen’s windowless secret room at its design center in Germany.

Brandstätter proudly described the Trinity project car as “Our time machine.” Drechsler couldn’t see under the sheets, but he still managed to make some observations. It’s a four-door coupe featuring a short hood, an extremely long wheelbase, and a sharp, steeply falling roofline. Drechsler stood by the concept and didn’t feel as if it featured exterior mirrors. Perhaps Volkswagen is switching to the resource-hungry virtual mirrors beginning with this model in the premium segments.

Current Volkswagen EVs sit on the MEB electric vehicle platform. However, the VW ID.4 Sedan will be based on a Scalable systems platform or SSP. SSP is the Volkswagen Group’s mechatronics platform developed for next-gen pure electric, digital, and highly modular EVs from every group brand.

SSP will be the successor to MQB, MSB, MLB, MEB, and PPE platforms. The PPE-based EV ‘Audi Artemis‘ will be the first model to adopt some of the modules of this platform in 2025. However, the VW Trinity will be the first true SSP model. The development of SSP is taking place in Wolfsburg, Germany, which is home to Volkswagen Group.

Volkswagen will develop the Trinity or the ID.4 Sedan using a new development process that is more harmonious and reduces the time taken by 25%. Vehicle projects will take 40 months from start to completion in the future, a significant improvement over the current time of 54 months. Volkswagen is developing a new R&D center, the Sandkamp Campus. It will house 4,800 engineers and come at an investment of USD 900 million.

VW Group CEO Dr. Herbert Diess has said that the VW Trinity would bring Level-4 autonomous technology to the mass market segments. CARIAD developed VW.OS and VW.OS v1.2 systems are integrated into PPE platform-based cars. The SSP cars would have VW.OS v2.0. The VW Trinity would also have the unified cell concept for the battery pack.

The new EV will have Level 2+ autonomy as standard. At a later stage, it will be possible to upgrade, but Level 4 autonomous driving will likely be a paid subscription.

Volkswagen Group CFO Arno Antlitz has said that software-related R&D costs have been shifted to CARIAD, which will be reported as a standalone entity in the future. The CARIAD business model foresees a significant upfront investment of about USD 2.2 to USD 2.8 billion per year. CARIAD will receive license fees for the software used.

Brandstätter revealed a few specifications, some of which seemed targeted figures, of the VW Trinity during the Auto Bild interview. He said that the car, presumably in its production version, will measure around 4.70 meters in length and offer seats for five occupants. Its WLTP range will be more than 700 km (435 miles). A 0-100 km/h (0-62 mph) sprint will take less than 5 seconds.

According to the Autocar report, Volkswagen could use a cobalt-free battery pack (like LFP, for instance) in the ID.4 Sedan. However, the company would need to ensure achieving performance and range standards with such chemistry is comparable to an NMC battery pack, if not better.

The charging power will be much higher than what current VW EVs offer (135 kW), as Brandstätter wants the flagship EV to charge as quickly as refueling an ICE vehicle.

On March 18, 2022, in an interview with Auto Zeitung, Brandstätter confirmed a highly anticipated specification of the EV. When asked when will the Volkswagen brand introduce 800-volt charging technology, he revealed that the Trinity will become that model (and thus, 2026 will be that year). Volkswagen Group’s current models featuring 800-volt charging technology (Porsche Taycan family) allow fast-charging at 270 kW, but future models due after 2025 could support a higher rate, potentially 350 kW. Fast-charging the Trinity’s battery pack from 5 to 80% level at 800-volt charging stations could take around 20 minutes.

The future project aims to eliminate production complexities. The SSP cars would have fewer variants and standardized hardware. Customers would have the option to choose from a plethora of features that enable or disable them at their convenience. The VW Trinity would mark the beginning of highly software-based EVs.

The subscription model will be extensive. Imagine paying extra for Spotify Premium; in the same manner, future VW cars will have features that can be activated on-demand — either for trial or even a complete purchase. This could range from buying a technical upgrade to upping the charging capacity to, say, 300 kW or higher. According to the Autocar report, 5G OTA updates will be standard in the ID.4 Sedan.

Volkswagen Group has confirmed that the new EV would be manufactured in Wolfsburg. Another factory outside the Leipzig plant location is under construction for the Level-4 capable VW Trinity and its future derivatives.

The future flagship of our electric fleet will roll off the assembly line in Wolfsburg from 2026. With Trinity, we are revolutionizing the all-electric mobility experience. We are setting new standards – in range, charging speed, and connected driving experience.

On March 4, 2022, VW’s Supervisory Board confirmed that the Trinity plant had been granted a formal go-ahead. The site will be located in Wolfsberg-Warmenau, close to the main plant. EUR 2 billion will be invested in the Trinity electric model, and construction of the carbon-neutral facility will begin in Spring 2023. VW also confirmed that the Trinity electric model will roll off the production line in 2026. Moreover, the Trinity facility will be a model for the rest of the Volkswagen plants across the globe.

On March 31, 2022, Reuters said in a report that Volkswagen will reduce the number of components in vehicles by several hundred and adopt techniques like large die casting to speed up production times. Launching EVs in fewer variants is among the solutions to slash production times. The implementation of these measures will benefit the Trinity project model. Volkswagen wants to cut production time to 10 hours per vehicle. Currently, they take 30 hours to produce one ID.3.

In an interview with Automobilwoche, Dr. Christian Vollmer said that reduced components and variants, increased automation, innovative logistics concepts, and highly efficient production lines will boost productivity and allow the company to reach its targeted production time of 10 hours. Dr. Vollmer is the BoM member responsible for Production at Volkswagen.

Dr. Vollmer cited the example of the Golf, saying Volkswagen offers it in several million configurations, but customers rarely use the vast amount of choices. Now, the company wants to use pre-assembled modules in the lowest number of variants possible instead of having many individual parts and making the production complex and time-consuming. It is examining using large modules made of die-cast aluminum, the production chief added.

Volkswagen is facing intense competition from Tesla at the production line. The American EV company has better production and vehicle development techniques in place to cut the production time. A company spokesperson said that Tesla can produce the Model Y at the Gigafactory Berlin-Brandenburg plant within 10 hours already, thanks to large die casting. The company uses two giga-presses and applies 6,000 tons of pressure to make the rear of the Model Y. It will receive six more giga-presses and make the front of the Model Y also with the same technique.

Volkswagen will use giga-presses for making large die castings of its EVs, but in Kassel, not Wolfsburg. The two locations are approx. 160 km (100 miles) apart, and the company plans to transport the finished body sections to Wolfsburg by train.

Volkswagen will reduce the production lines for combustion engine cars from four to two in Wolfsburg. Expect SSP-based vehicles across segments and group brands by the end of this decade; VW Group has a production target of 40 million SSP-based cars eventually.

The base VW Trinity/VW ID.4 Sedan price will be EUR 35,000, which converts to approx. USD 39,000. That’s the target Ralf Brandstätter revealed during the Auto Bild interview, but the final figure at launch could depend on market conditions. The all-new electric sedan will compete with the Tesla Model 3.

What is the VW Trinity release date?

The VW ID.4 Sedan, derived from the VW Trinity project, will arrive in 2026.

What will be the VW Trinity price?

Which are the main competitors to the VW Project Trinity?

The ID.4 Sedan is expected to compete with the Tesla Model 3.