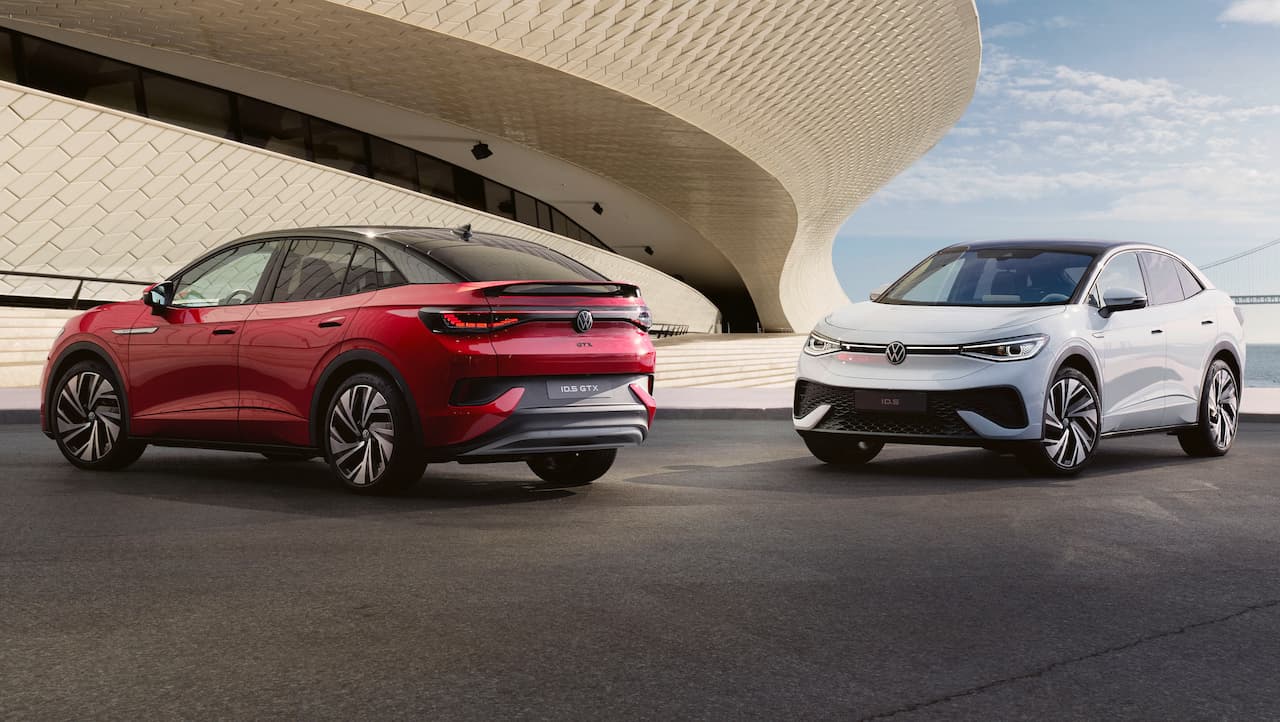 The VW ID.5, the SUV-coupe derived from the VW ID.4, is now available in the European market. The ID.5 carline includes a hotter GTX variant with an all-wheel-drive layout and a sportier styling right from day one.

The VW ID.5 differs from the ID.4 from behind the B-pillars with a lower roofline and a dramatically angled hatch for an aggressive stance and improved aerodynamics. Thanks to a curvier glasshouse and a flatter rear deck, the ID.5 has an unmistakable coupe-like appearance. The ID.5 sports a decklid spoiler that makes it sportier. The interior design of the coupe version of the ID.4 is the same.

The VW ID.5 GTX gets special styling bits similar to the ID.4 GTX. Three honeycomb elements on the outer ends of the bumper form the GTX variant’s LED DRLs and subtly convey its presence at the front. At the rear, instead of the model name badge, there’s a GTX badge on the trunk lid.

On June 15, 2022, Volkswagen introduced new black mirrors, a new, black GTX logo on the front doors, and new black alloy wheels to spruce up the exterior styling. These changes give the ID.5 GTX a more aggressive and sporty look that makes it stand out from the standard variant.

Along with the design refresh, Volkswagen has made some paid features of the ID.5 GTX standard. Climate comfort windscreen, darkened side and rear windows, two USB-C ports, heated front seats, a variable center console, and the Air Care Climatronic dual-zone automatic climate control system that were part of the Design and Comfort packages previously are standard after the update.

As Volkswagen announced on November 11, 2021, the VW ID.5 comes with Volkswagen ID. Software 3.0 that improves charging capacity and voice control among other features, and activates additional functions. The company released details of the new generation software on March 21, 2022. Below are the highlights of the v3.0 software:

Intelligent driver assistance systems – The Volkswagen ID. Software 3.0 brings a new Travel Assist feature along with Swarm Data to ID. models. It uses two radars at the rear and ultrasound to keep a watch on the vehicle environment.

Travel Assist with Swarm Data – It automatically keeps the vehicle in a fixed position in the lane – center by default or to the left/right instead if that’s the user’s driving style. Moreover, it can maintain a safe distance from the vehicle ahead and also the preset speed limit. At speeds of 90 km/h (56 mph) or more on the highway, it provides an automatic lane change function, too. Lastly, if the vehicle can get access to anonymous swarm data from other Volkswagen models, Travel Assist can provide support on roads with a single lane marking.

Park Assist Plus with Memory Function – As the name suggests, this is a more advanced version that allows the driver to save up to five different parking maneuvers in the vehicle. However, the vehicle can memorize these parking maneuvers only when the speed is below 40 km/h (25 mph) and the travel distance is not more than 50 meters.

New displays – The AR HUD now shows the new Travel Assist assisted lane change and also new symbols such as roundabouts as well as information related to the distance remaining to reach the destination. The turn arrows appear more integrated into the surroundings in the new version of the vehicle software. The ID. Cockpit (instrument cluster) now displays the State of Charge as a percentage next to a battery icon that shows the charge level.

Navigation has improved, and it locates the EV precisely in the lane within the system limits. Therefore, lane changes at highway junctions and exits are timed better and thus safer. Moreover, navigation displays local hazard warnings and includes new functions.

Battery Care Mode – Customers intending to prolong the life of the vehicle’s battery pack will be able to activate a new Battery Care Mode and cut off the charging when the State of Charge reaches 80%.

Smart e-route planner – Volkswagen has changed the charging menu’s structure to make it more informative and clearer. The company has brought it to the first screen of the central display. Smart e-route planner creates a well-thought route with multiple stoppages if the distance to the destination is long. It charts the course based on the traffic and route data, as well as the State of Charge the customer desires to end with upon arrival at the final destination and interim destination.

On March 16, 2022, Volkswagen CEO Ralf Brandstätter announced the ID.5 (including its GTX variant) and the ID. Buzz (now under series production & on sale in H2 2022) will debut its new ID. 3.1 software. Volkswagen says that its latest software for its ID. electric vehicles improves comfort, shortens charging times, and optimizes operation.

The ID.5 and ID.5 GTX aren’t available with Plug & Charge support. The v3.0 vehicle software doesn’t support this convenience feature, but Volkswagen plans to enable it with the v3.1 software in the future, Volkswagen Group CEO Dr. Herbert Diess revealed in a post on LinkedIn on March 24, 2022.

In the same LinkedIn post, Dr. Diess said that all new ID. models sold from May 2022 are “expected” to feature Plug & Charge and that he expects an OTA update 3.1 to enable the new feature in existing cars from June 2022.nDr. Diess demonstrated the operation of Plug & Charge in an ID.4 GTX the same day, which you can watch in the video embedded above.

Volkswagen conducted a camouflaged prototype drive of the VW ID.5 for select journalists in Europe in August 2021. In a video, Thomas Majchrzak from YouTube channel Autogefuhl shared his first impressions of the upcoming EV from that event.

Majchrzak noted that the VW ID.5 resembles the ID.4, and while it has the same wheelbase, its body is 3 cm (1.2 in.) longer. Volkswagen wanted the ID.5 to feel like a coupe, so designers raked the D-pillars steeply and stretched the tail section. As a result, the rear overhang of the ID.5 is longer. Thanks to the more aerodynamically efficient exterior, the VW ID.5 has a lower drag coefficient of 0.26 Cd than the ID. 4’s 0.28 Cd.

The driving experience is more or less the same because the wheelbase is no different. The rear window is slightly smaller, and the outward visibility is not as good.

VW ID.5 not exclusive to Europe

Volkswagen held the first Way to Zero Convention on April 29, 2021, presenting its roadmap for net carbon-neutral mobility. “The ID.5 will be launched at the end of 2021, initially in Europe and China,” Brandstätter said at the event, revealing that the ID.5 is not an EU-only model. The word “initially” is considered a sign of plans to offer the SUV-coupe in many new markets, and one of them could be the United States, which is taking to EVs in a big way.

The priority for the American market is localizing the ID.4. Volkswagen has confirmed that it will start manufacturing the ID.4 at the Chattanooga plant in mid-2022, which needs to run smoothly before models are added to the lineup. Gleaning from Volkswagen’s announcement in March 2022 detailing investment and production plans of the company, the ID.5 is not on the radar for local manufacturing.

Perhaps the SUV-coupe could be imported from Germany and positioned above the ID.4. It’ll likely come with a higher price tag but will offer more style. If it is imported, it’ll likely be limited in numbers to start with.

VW’s manufacturing facility in Zwickau, Germany, is the first in the world to go from an ICE-production facility to one that exclusively makes EVs. Since January 2022, the ID.5 and ID.5 GTX’s production is conducted alongside five other MEB-platform-based VW Group cars — ID.3, ID.4, Audi Q4 e-tron, Audi Q4 Sportback e-tron, and the Cupra Born.

The plant’s daily output capacity is 1,400 units with an annual production capacity of around 330,000 EVs. However, VW says that the plant can only function at total capacity once the chip shortage problems are rectified. The current plant capacity corresponds to 300,000 EVs annually.

Volkswagen has made a bold claim that the Zwickau facility is now carbon-neutral. The press release states that the entire supply and production chain is zero-emissions, and any unavoidable emissions are offset through climate action. Battery suppliers even agreed to use green electricity for cell manufacturing.

VW spent EUR 1.2 billion for the conversion. The plant uses Industry 4.0 robots and driverless transportation that autonomously carry parts across the factory.

What is the VW ID.5 competitor set?

Is the VW ID.5 arriving in the United States?

Volkswagen has not announced plans for the ID.5 in the U.S., where localizing the ID.4 & introducing ID. Buzz are priorities.