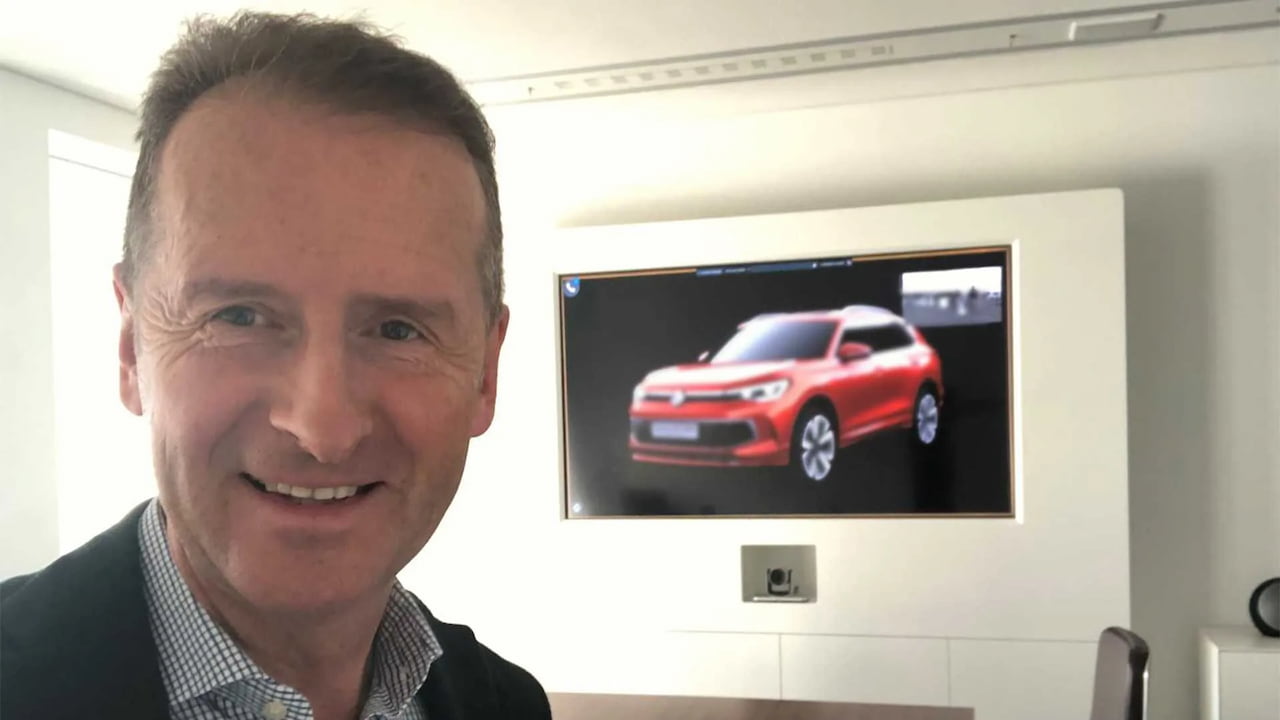 The second-gen VW Tiguan received its customary mid-life facelift in 2020, encompassing soft changes. In 2023, the next-gen VW Tiguan, sporting comprehensive updates, will replace the current generation that debuted in late 2015. Unlike the current model, the 2023 VW Tiguan will have not one but two plug-in hybrid variants, as reported by the German press.

The Tiguan is the best-selling Volkswagen worldwide. In the U.S., VW has let their long-standing Golf and Passat models die, which places high expectations from the Tiguan, which is also currently the best-selling car for VW of America. Here’s what we know of the next-generation Volkswagen SUV:

Back in 2020, former Volkswagen Group CEO Dr. Herbert Diess had shared an update on Linkedin of the company adapting to the Coronavirus lockdown. He said the company approved a vehicle design direction via web meetings for the first time. Along with the post, Diess showed a blurred video screen on the wall behind him that had an unidentified red crossover SUV with a soft styling (set as the featured picture of this story). Back then, speculations were that Dr. Diess had just approved the design of the next-gen VW Tiguan.

Spy shots captured during testing on European roads (view on CarBuzz) reveal some of the design changes for the Tiguan. When designers gave the Tiguan its mid-life facelift in the second generation, they made the SUV’s face more expressive. Now, they have prepared a more extensive character change for the compact SUV, one that gives a better definition to its profile as well.

The next-gen Tiguan’s hood and roof slope to a greater degree, a change particularly visible on the latter. The rear overhang looks longer and more upswept, while the C-pillar is more raked. Also worth noting is a new belt line that swiftly rises at the end of the rear doors and sweeps up at a much greater angle at the lower edge of the quarter glass. Overall, the next-gen Tiguan is a more dynamic and confident SUV.

According to a report from Auto Zeitung, the next-gen VW Tiguan’s interior should be more digital and focus on online networking. The Tiguan is always-online model since it adopted the MIB3 infotainment systems with the mid-cycle refresh in the second generation in 2020. In the third generation, the compact SUV could feature touch sliders introduced in the Golf in its eighth generation. The air conditioning system, infotainment system, and panoramic sunroof could be controllable using touch sliders.

One of the spy shots has partially revealed details of the next-gen Tiguan interior. The steering wheel of the redesigned SUV looks similar to that of the current model, but the touchscreen infotainment system is a brand-new unit. From the design and size, it seems to be related to Cupra Formentor’s 12-inch (1560×700 pixel) system that is compatible with wireless Apple CarPlay and wired Android Auto. A 12-inch free-standing touchscreen infotainment system would be a big upgrade over the dashboard-integrated 8-inch unit which is small as per the latest industry standards.

The next-gen Tiguan should feature Volkswagen’s conventional steering wheel. The company has developed a new steering wheel with touch-sensitive controls for its ID. electric models. However, as customers largely dislike the capacitve steering wheel, the company has decided to revert to the push-button type, as per an Autocar report dated October 26, 2022.

Spy pictures indicate that the next-gen Tiguan will have a longer rear overhang for improved cargo space, perhaps up 10 percent. Below are the measurements of the current model for reference:

Note: ‘NWB’ and ‘LWB’ are abbreviations of ‘Normal Wheelbase’ and ‘Long Wheelbase,’ the internal destinations used to differentiate the two wheelbase versions of the second-gen Tiguan. The U.S. only gets the LWB version, which is why, unlike in Europe, Africa, Asia, and Oceania, it ships without the ‘Allspace’ badge.

While demand for pure-electric vehicles is surging, plug-in hybrids should continue to rake in business in many markets for the coming years. Customers who need a higher driving range, live where there aren’t enough public charging stations, or don’t have the budget for a second car, will find PHEVs suitable.

The VW Tiguan R PHEV will likely use a cheaper and more efficient, 2.0-liter single-turbo inline four-cylinder gasoline engine instead of the V6 mill. Regular variants could employ a 1.5-liter turbocharged petrol engine with an electric motor.

We will still need combustion engines for a while, but they should be as efficient as possible, which is why the next generation of our core products – all of which are world models – will also be fitted with the latest generation of plug-in hybrid technology, with an electric range of up to 100 kilometers.

Ralf Brandstätter, CEO, Volkswagen, during the announcement of the Accelerate strategy in March 2021

In November 2021, in an interview with Auto Bild, Brandstätter reaffirmed a pure electric range of 100 km (62 miles) for the next-gen Tiguan plug-in hybrid. Talking about the future models to be produced at the Volkswagen Wolfsburg plant, he said that the company was examining all options since March 2021 – Tiguan, Tayron, Golf – all with the new-generation plug-in hybrid system that offers a pure electric range of 100 km (62 miles).

Based on new spy shots of the next-gen VW Tiguan, Motor Authority said in a report on June 14, 2022, that a pure electric variant would also be available in the new Tiguan family. Readers familiar with the e-Golf know that technically it is possible to offer the Tiguan as an EV since it sits on the same, MQB platform.

It seems unlikely that Volkswagen will abandon its plans to only produce bespoke EVs. The company has been clear about its goals with the MEB platform in this regard and it would take a significant shift in strategy to change course now. On the other hand, it is not uncommon for mainstream automakers, with Volkswagen Group brands no exception, to launch market-specific models, including EVs on older platforms. A possibility is that the Tiguan EV is designed exclusively for China where the ID.4 hasn’t exactly received the success Volkswagen intended.

Regardless, we don’t see the VW Tiguan Electric arriving in the United States. Volkswagen is making the ID.4 accessible in the U.S. by localizing production and has planned new basic configurations with a 62 kWh battery for MY2023.

Another possibility is that the spotted prototype is a plug-in hybrid variant. Perhaps the closed-off upper grille is Volkswagen hiding the new design or testing out a different intake system. The added weight of a new plug-in hybrid system could explain why the prototype sits oddly low at the rear.

Reports say that the next-gen 2023 VW Tiguan line-up won’t include the Allspace long-wheelbase version. Given that the Tiguan LWB has proven its popularity worldwide with a remarkable share of 55% in global production, the company is planning a standalone model to replace the seven-seat variant.

Citing an internally circulated document, Automotive News Europe reported in 2020 that Volkswagen plans to manufacture a new SUV based on the Chinese market VW Tayron at the Wolfsburg plant in Germany from 2024. In the Auto Bild interview in November 2021, Brandstätter revealed that Volkswagen is considering making the VW Tayron in Wolfsburg.

The German-made Tayron could be the Tiguan Allspace‘s successor, improving in all areas from the previous model. If the Tiguan reverts to a five-seater like in its first generation, expect a streamlined exterior that is sharper and bolder, an evolutionary interior with improved comfort and convenience, and more safety, possibly including a new front center airbag between the seats.

The next-gen VW Tiguan could debut in H1 2023 and go on sale in summer 2023 in Europe. We were expecting the premiere in H2 2022, but it seems like that’s no longer the case. In the midst of a global pandemic, a shortage in semiconductor chips, and Russia’s invasion of Ukraine, the auto supply chain has caused delays in the product programs of most companies.

Volkswagen only has the long-wheelbase version of the Tiguan in the U.S., and as explained, there are doubts over this specification featuring in the next generation line-up. However, the company has confirmed that it will launch the next-gen Tiguan in America. “I can confirm Tiguan will have a successor (in the U.S.),” Hein Schafer, Senior Vice President of Product and Strategy at Volkswagen Group of America (VWGoA), told CarBuzz in July 2022.

Schafer was talking about introducing performance SUVs in the U.S. A part of that discussion was about how VWGoA couldn’t introduce the Tiguan R, which is exclusively standard-wheelbase. The U.S. will get the next-gen Tiguan in a performance variant, although it is not yet clear whether that will be a Tiguan R or something else entirely. Expect the next-gen compact SUV as an MY2024 product, followed by performance versions.

The third-gen VW Tiguan should pack extensive changes in all aspects influencing the purchase decision, including design, comfort, space, convenience, and safety. Expecting it to be the final generation model, at least one with an internal combustion engine, Volkswagen may throw everything at it, offering the best performance and efficiency to date on a Tiguan. Plus, with the company hinting at a potential U.S. launch of something similar to the Tiguan R, the third-generation model could be one of the hottest launches of 2023!

What is the next-gen VW Tiguan release date?

Which models will the 2023 VW Tiguan compete with?

Alternatives to the 2023 VW Tiguan would include the Toyota RAV4, Hyundai Tucson, and Honda CR-V.

What is the expected price of the next-gen VW Tiguan PHEV?