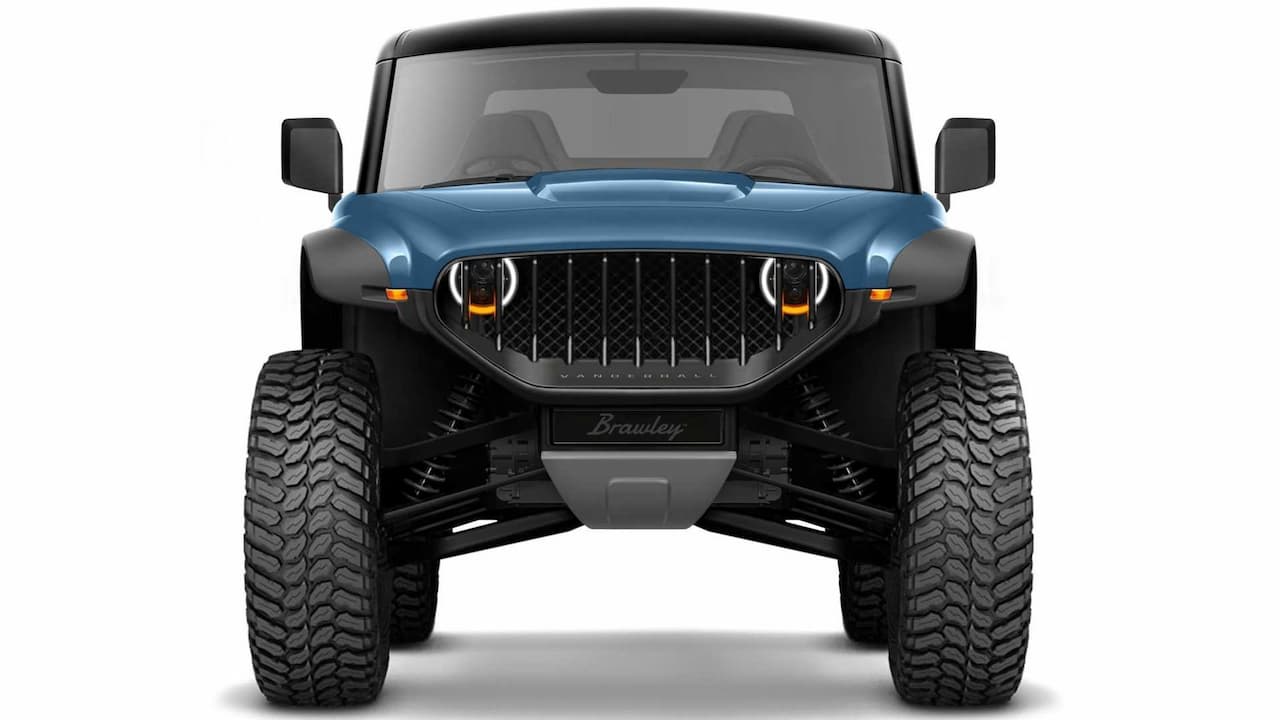 Utah-based Vanderhall Motor Works, better known for their three-wheeled roadsters, announced pricing for the Vanderhall Brawley, its first four-wheel vehicle, in December 2021. The Brawley is a rugged all-terrain electric SUV, though it should be noted that it is not classified as an automobile in the USA as it does not have airbags and does not meet the automotive safety standards.

The Vanderhall Brawley will be available in three variants – Brawley, Brawley GT, and Brawley GTS’s, with prices starting at USD 34,950 (excl. destination and preparation charges).

There is no mistaking the capability of the Vanderhall Brawley for anything other than conquering the terrain. This is clearly given away by the 18-inch wheels housing 35-inch tires and the 22 inches of suspension travel. The base Brawley doesn’t see a roof which further adds to its rugged appeal, whereas the GT and GTS get a roof and a windshield with wipers.

All variants of the Brawley feature an 11-slot grille, LED lighting, and satin fender flare extensions. The base Brawley and GT variants are offered in 2 color options each, but the GTS is available in all 6 color palettes.

Inside, all variants of the Brawley get four individual adult seats with a 4-point harness, a Bluetooth-enabled music system, and heating and air-conditioning. The GT and GTS add the option of heated seats. Otherwise, the dashboard is pretty basic housing toggle switches for the various features, and the instrument cluster consists of three gauges: the speedometer, the battery level indicator, and what appears to be a gauge for the optional ViDar optical radar system.

The Brawley houses four individually controlled electric motors that enable what Vanderhall calls ‘eCrawl’ off-road mode. eCrawl includes Hill Hold control and allows driving through tough, slippery inclines and declines. The electronic features work at speeds up to 10 mph. On the Brawley GT, eCrawl is accompanied by eTank, which, as the name suggests, rotates wheels on the same side in a direction opposite to the other side. This facilitates a turn like a tank, taking up minimal space, and is something Rivian announced for the R1T as well (Rivian calls it ‘Tank Turn’ and announced the feature when it was not yet ready for launch).

Buyers who get the Brawley GTS can look forward to additional off-road features like eCrab and eSteer. The former allows for a Hummer EV-like crab mode in which all wheels turn in the same direction. eSteer is like all-wheel steering, a feature that’s becoming common in luxury cars. It helps reduce the turning radius by turning the rear wheels in the opposite direction to the front.

The Brawley is built on a 300V architecture where the motor, inverter, brakes, and cooling system are housed in a single unit. The company says that because it has used advanced lubricants, the Brawley does not require maintenance for up to 10 years.

The NMC pouch-type cells are claimed to offer ‘class-leading’ energy density. A battery conditioning system will extend the cold weather range and increase the battery lifecycle, Vanderhall claims. All variants should be getting regenerative braking as standard, and the GTS will be optionally available with a larger battery pack offering 200+ miles of range (company claim).

The standard Vanderhall Brawley costs USD 34,950, the Brawley GT USD 42,950, and the Brawley GTS USD 49,950. Vanderhall is taking reservations for the Brawley with a deposit of USD 100, but it hasn’t said when it will start customer deliveries.

What is the Vanderhall Brawley price?

Prices of the Vanderhall Brawley start at USD 34,950.

What is the Vanderhall Brawley release date?

Vanderhall hasn’t revealed when it plans to launch the Brawley yet.

Which models are Vanderhall Brawley rivals?

It could compete with the Electric Ford Bronco and Jeep Recon, but these models are a few years away from launch.