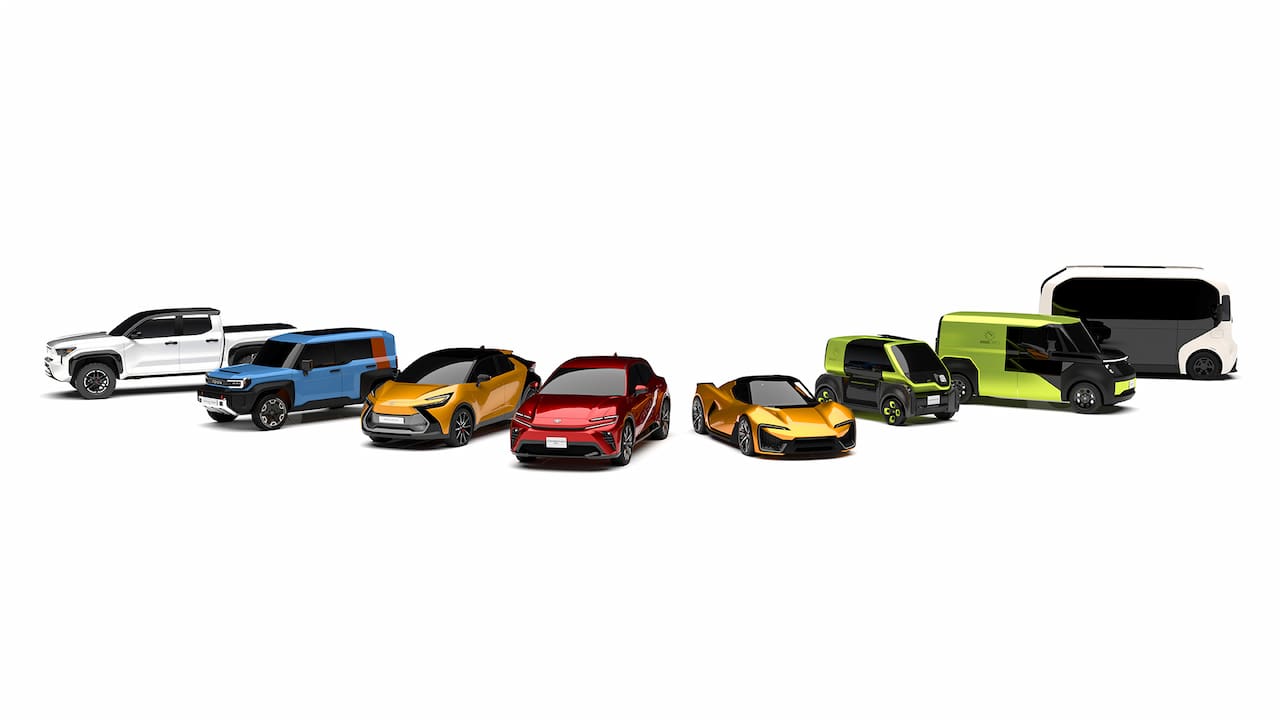 While the media was cautiously speculating on a first-ever Toyota Tacoma Hybrid, Toyota Motor Corporation (TMC) has fueled the fire by unveiling the ‘Pickup EV’ concept that looks like a production-intent Toyota Tacoma EV. At Auto Shanghai 2021 (April 2021), TMC confirmed that an electric pickup truck was part of its future lineup. The presentation of the Pickup EV concept in the BEV strategy announcement on 14 December 2021 in Japan indicates that Toyota referred to a Tacoma Electric version to make a segment entry.

The conceptual proposal for the Toyota Tacoma Electric truck looks similar to the gas-powered model, but several visual changes set it apart. It features sharper headlamps with a vertical extension, and the new Tundra has influenced the design. There’s a closed-off hexagonal radiator grille with honeycomb-shaped surfaces on the panel between the headlamps. The horizontal LED fog light bars below the faux radiator grille also look like they originated on the 2022 Tundra. Save for unique styling parts, the basic exterior looks more or less the same.

The Tacoma EV appears to sit quite high from the tarmac. The ground clearance could be around 10 inches, putting it in the same territory as the Tundra! The design team seems to have wrapped the six-double-spoke alloy wheels in 33-35 inch off-road tires. The approach angle also looks ready for the trail. Like in the case of the Ford and Chevrolet EV pickups, expect the Toyota electric truck to launch in everyday, work, and off-road specifications.

The concept’s overall design is realistic, and the production version should not stray from what Toyota has shown with the concept. We made minor changes to the electric truck concept, such as normalized bumpers that focus less on approach/departure angles, tires more suited for everyday conditions, steps to enter and exit with ease, a charging port cover on the front fender, and a shark fin antenna. We’ve also used single-tone body paint, added parking sensors, and tweaked the headlight for realism. We’re still a ways off from seeing the electric truck, but it could resemble what we’ve imagined.

Toyota hasn’t shared details of the Tacoma EV, but it’s safe to assume that it’ll be a conversion of the next-gen Tacoma, not a pickup engineered as an EV from the beginning like the Rivian R1T or the Chevrolet Silverado EV. TMC has given ample hints about how it will have select EVs developed on modified ICE model platforms:

Each electric vehicle should be unique and special, not only those on dedicated platforms but also those related to existing models, whether that means building on Toyota’s off-road heritage to create new exciting recreational experiences or finding new ways to combine versatility with dynamic driving.

TMC plans to invest JPY 380 billion (USD 2.83 billion) in automotive batteries in the U.S. by 2030. The company will use this investment to develop and manufacture batteries for partially electric and fully electric vehicles. As a result, the Tacoma EV could pack locally developed and built batteries.

Electrified vehicles accounted for 25% of the company’s sales volume (both Toyota and Lexus) in 2021, and this number is likely to grow significantly higher in the future. The Japanese automaker plans to introduce 30 Toyota and Lexus BEVs, including the already-revealed bZ4X and RZ, by 2030. Most of these models should come to the U.S., hence the early battery localization preparations.

Long-lasting batteries would be crucial to ensure durability and reliability, which are the key USPs of Toyotas. During a media and investor briefing in September 2021, TMC said that power output is its focus for HEV batteries and endurance for the PHEV and BEV batteries. Masahiko Maeda, the company’s Chief Technology Officer, said that in the case of the bZ4X, it had set a target of 90% endurance performance.

The Tacoma EV should be a step ahead of the gas-powered Tacoma when it comes to features, especially tech features. TMC could use Arene, its upcoming vehicle software platform, in its first electric pickup. All it has said is that this software platform will allow it to deliver new ideas to its customers as quickly as possible, suggesting that frequent and a variety of OTA firmware updates will be available for future improvements and feature additions. Woven Planet, a subsidiary of TMC, is developing the software. If not Arene, a software platform developed by Texas-based Toyota Connected North America (TCNA) could be employed in the Tacoma EV.

Given that its donor model (next-gen gas-powered Tacoma) should go on sale and achieve normalized production in 2023, the Toyota Tacoma EV should enter showrooms by 2025.

At least 300 miles of range and a starting price of under USD 40,000 would be the general expectation from potential Tacoma EV customers mid-decade. Ford has introduced a higher-segment electric pickup, the Ford F-150 Lightning, at that base price, which is to be followed by General Motors with the Silverado EV WT in spring 2023. The smaller Toyota electric truck would rival Ford’s Ranger EV, which could arrive closer to 2025, and therefore pricing has to be competitive.

An electric truck survey of 1,175 current car shoppers Autolist conducted in October and November 2022 has indicated a high interest in the Toyota Tacoma EV. The Ford F-150 Lightning ranked no.1 in the survey, with 24% of respondents specifying it as their top pick. The Toyota Tacoma EV, a model that formally doesn’t even exist and has appeared just once, that too online, ranked second, with 20% of respondents favoring it. The other models included in the survey were the Tesla Cybertruck, Chevrolet Silverado EV, Ram 1500 EV, GMC Hummer EV Pickup, GMC Sierra EV, and Rivian R1T.

The Tacoma has been popular in the United States because of its value-for-money appeal and relatively low price tag. It offers the practicality of a daily car while also capable of towing, hauling, and off-roading. Toyota would have to protect these traits of the Tacoma when taking it down the path of all-electric.

The Toyota Tacoma EV could be an affordable mid-size electric pickup designed to appeal to electric pickup customers who find the likes of the Ford F-150 Lightning and Chevrolet Silverado EV too expensive or over-equipped for their needs. Affordability and driving range could be key to its success, even more than performance and capabilities.

What is the Toyota Tacoma EV release date?

Toyota will likely launch the Tacoma EV as early as 2025.

What will be Toyota Tacoma EV price?

The Toyota Tacoma EV’s prices may start at under USD 40,000.

Which models will be Toyota Tacoma EV rivals?

The Toyota Tacoma EV would compete with the Ford Ranger EV.