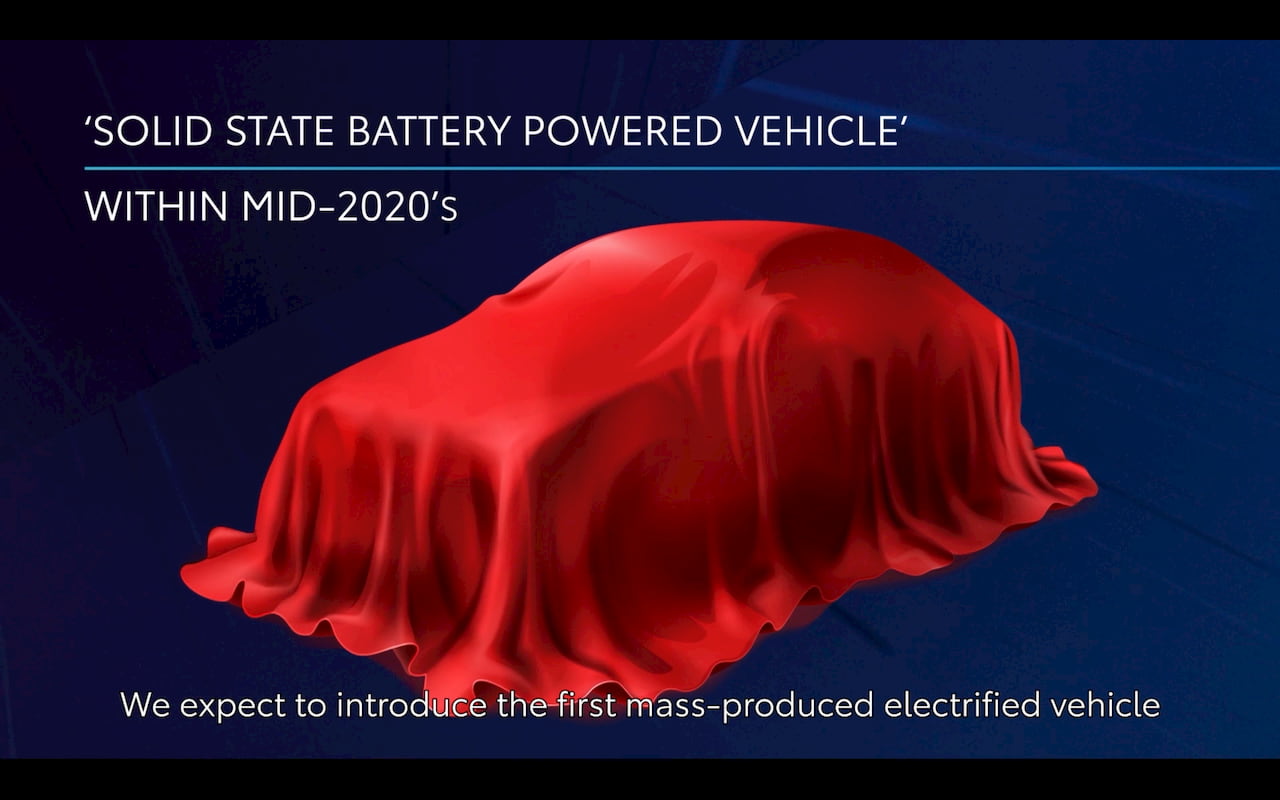 After launching the Toyota bZ4X this year, Toyota expects to unveil its first mass-produced EV with a solid-state battery by 2025. In 1991, Sony introduced the Lithium-ion battery to the world. This new technology from the Japanese revolutionized the way people use batteries. Three decades later, Toyota and Panasonic hope to introduce the next generation of battery technology for automobiles.

The two companies established Prime Planet Energy & Solutions in April 2020 amidst the COVID-19 pandemic. Toyota owns 51% of the JV company, and the remaining ownership is with Panasonic.

We expect to introduce the first mass-produced electrified vehicle using a solid state battery in the first half of 2020’s.

The first on-road registered Toyota prototype using Solid-State Batteries was an LQ. Toyota built it in June 2020 and registered it for on-road use in August 2020, and the video below shows that prototype. The company is hoping to explore this new technology to its fullest extent.

Toyota has briefly shared its learnings from the development process. The company has said that solid-state batteries could have higher output because of the fast movement of ions within them, but there is an issue of short service life. It needs to continue development, particularly of solid electrolyte materials. The Japanese automaker may use solid-state batteries in its hybrid cars, and may do so before it straps them on to pure electric cars.

With the characteristic of fast ion movements and higher tolerance to heat, we are currently aiming on high output and a shorter charging time. For this reason, we believe focusing on the application to HEV is the fastest way to deliver the product to our customers. However, there are still challenges remaining. For example, longer use will result in creating spaces in the solid electrolyte which leads to deterioration.

Toyota wants to sell 8 million electrified vehicles, including 2 million units of BEVs and FCEVs combined, by 2030. If it wants to deliver 8 million xEVs, it will need a battery capacity of 200 GWh, Masamichi Okada, CPO, Toyota, said during an investor briefing on batteries and carbon neutrality on September 7, 2021. While securing 200 GWh of battery capacity, the company intends to reduce the battery cost by 50% as well, Okada added. Masahiko Maeda, CTO, Toyota, confirmed during the same event that the target of introducing the first model with a solid-state battery in the first half of the decade remains unchanged.

Like the mainstream brand Toyota, its luxury sibling Lexus is planning to adopt all solid-state battery (ASSB) technology. On December 14, 2021, Toyota Motor Corporation (TMC) held a media briefing to outline its EV strategy. President Akio Toyoda revealed a bevy of new EVs at the mega press event, and many of them were Lexus models. One of the future Lexus EVs unveiled that day was the Lexus Electrified Sport concept, a vision of the Lexus LFA successor.

When briefly discussing the concept version of the Lexus LFA successor, Toyoda said that the Lexus Electrified Sport (in its production version)’s acceleration time (presumably 0-62 mph) will be less than 2 seconds and its range will be over 700 km (435 miles). Further, he revealed that TMC is considering all solid-state batteries for the future electric sports car.

Acceleration time will be in the low 2-second range, cruising range over 700 km, and with the possible use of solid-state batteries in mind, we will aim to create a truly high-performance battery EV.