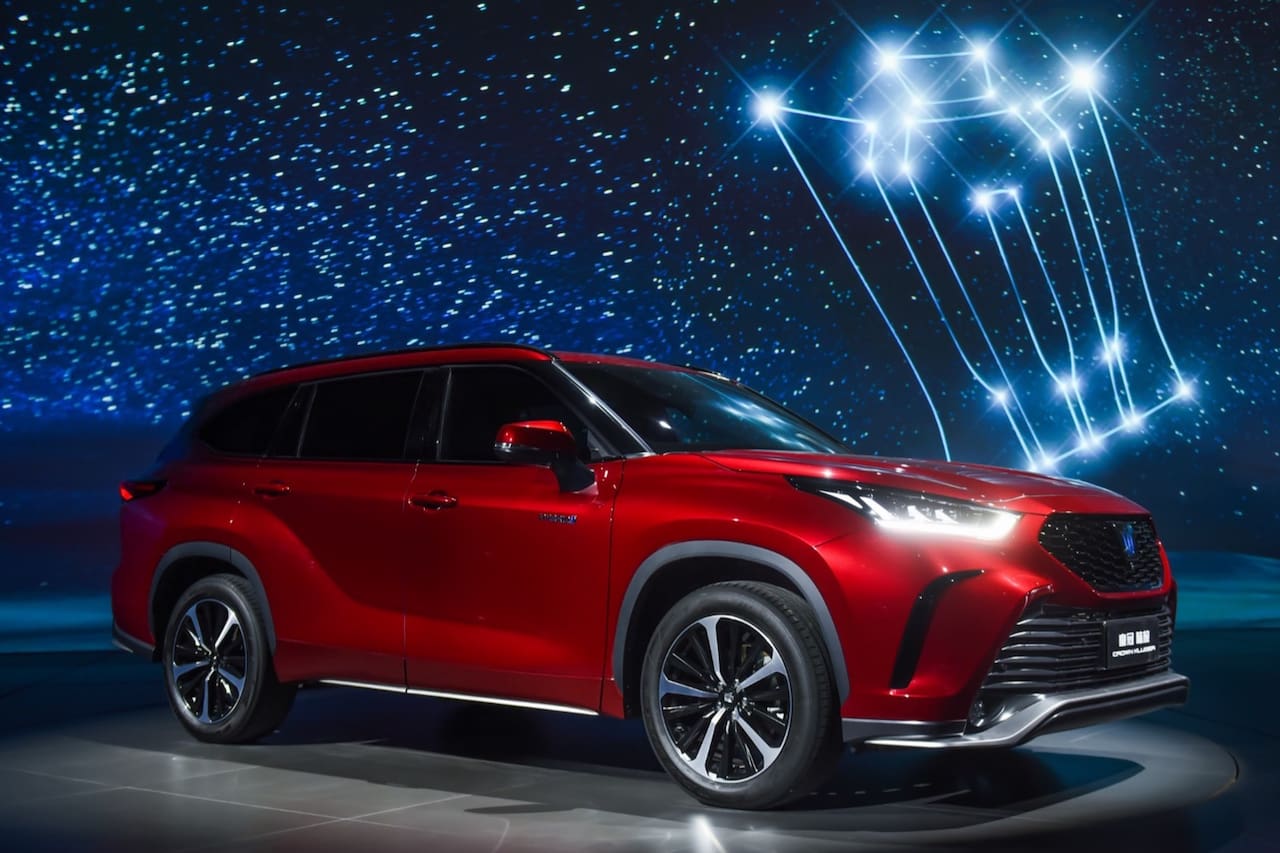 The Toyota Crown Kluger (Chinese name: 丰田皇冠陆放) that debuted at Auto Shanghai 2021 entered series production on August 16, 2021, and is now in Chinese showrooms.

Global automakers sell cars with different names, sometimes differently styled, via more than one JV company in China. The GAC-Toyota JV company sells the regular Toyota Kluger in the country with its original name – Toyota Highlander. The Toyota Crown Kluger is FAW-Toyota’s version of the Highlander.

To differentiate from the Toyota Highlander/Kluger, the Crown Kluger gets sophisticated headlight graphics in a three-eyed look, an inverted hexagonal upper grille with the Toyota Crown badge, and a bold, trapezoidal lower grille that similar to that of the new Toyota Camry, with chrome-embellished horizontal bars. The resulting appearance matches that of the Highlander XSE that debuted in March 2020 in the United States.

Everything from the sportier grille with a unique insert to the rocker moldings at the front and sides, the blacked-out accents, and the 20-inch dual-tone alloy wheels look identical to the Toyota Highlander XSE. The interior design is again familiar, and like in the XSE variant, two-tone red-black upholstery has been used. Only the Crown badges in various sizes on the radiator grille, the wheels, and the steering wheel are unique elements inside and out.

Powering the Toyota Crown Kluger is a standard 2.5-liter hybrid engine with a maximum power of 141 kW or 189 hp and a maximum torque of 238 Nm (176 Lb.-Ft.). Depending on the configuration, one or two electric motors assist the internal combustion engine. The 2WD configurations have one motor at the front, generating 134 kW (180 hp) and 270 Nm (199 Lb.-Ft.). The 4WD configurations have a second electric motor as well, spinning the rear wheels. This motor produces 40 kW (54 hp) and 121 Nm (89 Lb.-Ft.). Irrespective of the configuration, 183 kW (245 hp) is the system output. The battery pack comprises 40 battery modules consisting of 6 Ah nickel-metal hydride cells.

The Toyota Crown Kluger is available in six configurations, with prices starting at CNY 275,800, which converts to USD 42,640.

Toyota has confirmed that the Crown Kluger is exclusive to China:

In 1964, Toyota entered the Chinese market and introduced the first Toyota flagship model “Crown”, which was loved by Chinese consumers. Toyota hopes that while inheriting the excellent DNA of Crown cars, it can keep up with the times and meet the actual needs of Chinese consumers. Thus, China’s exclusive new SUV model “Crown Kluger” was born.

Crown sub-brand to get other cars, says report

China’s autohome.com.cn speculates that several Crown-badged Toyotas could follow the Toyota Highlander Crown. Toyota (FAW-Toyota) may use Crown in models like Corolla and Sienna, albeit only for their high-end versions. For example, of the two global versions of the twelfth-gen Toyota Corolla, ‘Sporty’ and ‘Prestige,’ the latter could be the Toyota Crown Corolla. In China, GAC-Toyota sells the Sporty version (the one sold in the U.S.) as the Toyota Levin, while FAW-Toyota sells the Prestige version as the Toyota Corolla.

Toyota’s ‘other’ Crown SUV for Japan

It emerged late 2020 that a Toyota Crown SUV would either replace or accompany the Toyota Crown sedan, the longest-selling Toyota model name, in 2022, in Japan. The new hybrid SUV (unrelated to the Kluger or current Toyota SUVs) will likely slot above the Harrier as a luxurious Toyota utility vehicle in the monocoque category. Unlike the Crown Kluger, it could be sold in global markets but whether the U.S. will be ‘Crowned’ remains the big question!