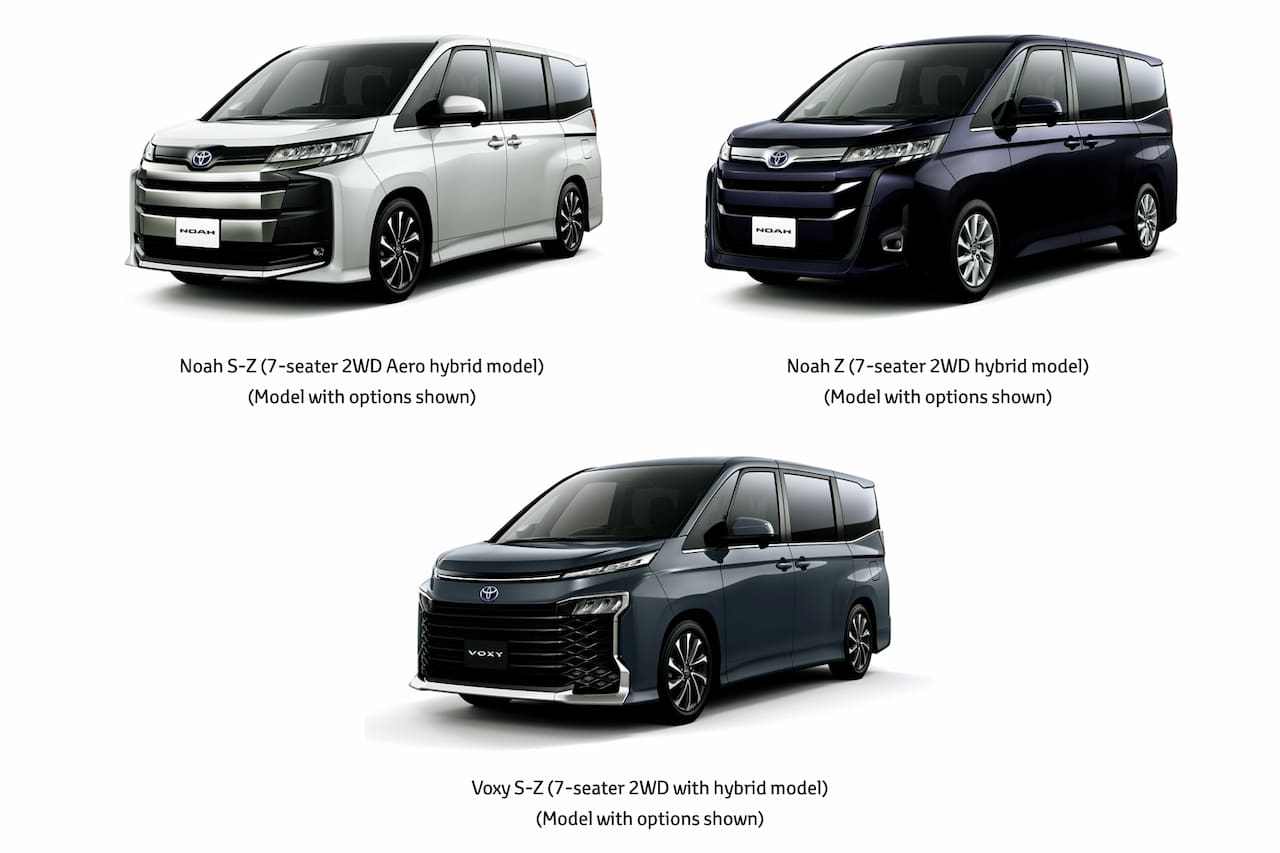 Shortly after turning 20 in November 2021, Toyota Motor Corporation (TMC)’s popular minivans Noah and Voxy nameplates entered their fourth generation at the start of this year. The 2022 Toyota Noah and 2022 Toyota Voxy come with more comfort, convenience, and an all-new hybrid system.

The 2022 Toyota Noah and 2022 Toyota Voxy, like their predecessors, feature a powerful and sophisticated design.

The 2022 Toyota Voxy features an elegant grille with chunky horizontal bars finished in body color, while the 2022 Toyota Voxy sports a gloss black grille with slim horizontal bars. The former is available with a special Aero kit that swaps the traditional grille with a more prominent one featuring wider and extruded horizontal bars in a metallic finish. Both models wear the Toyota logo instead of a model-specific logo like the MY2021 minivans. The front bumper of both minivans features vertical C-shaped outer ends, and the 2022 Voxy’s piece shimmers with chrome trim on the sides.

Compared to its predecessor, the 2022 Noah has slimmer headlamps. The 2022 Voxy has SUV-style split headlamps, just like the previous model, but with a curvy LED DRL instead of a sharp one. While the 2022 Noah features squarish fog lamps, the 2022 Voxy flaunts stylish fog lamps in a honeycomb design. TMC says that the all-new Voxy’s front and rear lamps glow “mysteriously.”

Instead of simple, circular wheel arches, both all-new Noah and all-new Voxy feature squarish wheel arches in a design inspired by Toyota SUVs. The beltline starts straight and rises from behind the C-pillar, and it keeps rising until the D-pillar.

Moving back, curvy, L-shaped horizontal tail lamps and the wide curvature on the tailgate lend the redesigned minivans a more fashionable look. TMC has equipped the all-new Noah and all-new Voxy with a rear hatch door that customers will be able to push and stop at any angle by karakuri mechanism. The company claims that these are the world’s first vehicles to offer such a feature.

As for the interior, the 2022 Noah and 2022 Voxy feature a redesigned dashboard, new vertical side AC vents, and a new steering wheel with a compact center pad. The center console has a clean and modern look with a new rectangular climate control panel, a new stubby gearshift lever, and a metal frame.

A fully digital instrument cluster is unavailable, though this is 2022! Depending on the configuration, the all-new minivans pack either an 8-inch Display Auto touchscreen infotainment system or a 10.5-inch Display Audio Plus touchscreen infotainment system. The latter includes satellite navigation. The new-gen Voxy and Noah also come with updatable software.

On the safety front, TMC equips its new compact minivans with Toyota Safety Sense, which means that they get the company’s latest active safety features. A noteworthy mention here is Proactive Driving Assist. This Toyota-first feature supports steering and deceleration so that the vehicle doesn’t get too close to cyclists, pedestrians, and parked vehicles. Moreover, this feature supports manual deceleration in response to the vehicle or curve ahead and reduces the need for frequent pedal inputs.

The Noah/Voxy twins are now available with Advanced Drive, a Toyota Teammate function. Advanced Drive makes driving easier during traffic congestion. It works only on motor-vehicle-only roadways and when Radar Cruise Control and Lane Tracing Assist are on in traffic congestion (0-40 km/h or 0-25 mph). TMC hasn’t detailed this feature in the press release, but if it’s similar to what it announced in the Mirai in 2021, it’s safe to assume that the onboard system frees the driver from operating the accelerator, brakes, and steering. In Mirai’s case, the car can automatically maintain a safe distance from other vehicles, change lanes, navigate to a lane split, and overtake other vehicles.

The new Toyota Noah and Toyota Voxy sit on the TNGA platform that debuted in December 2015. TMC says that it has optimized the front and rear suspension geometry to produce a well-built, rigid body.

TMC is using a new-generation hybrid system that employs the 2ZR-FXE 1.8-liter engine. Motor and battery outputs are up, and so is the system efficiency. With a WLTC test cycle-derived 23.4 km/l figure, TMC claims this hybrid powertrain offers class-leading fuel efficiency. The E-Four system also includes a more capable motor that delivers more torque to the rear wheels, an improvement that should make customers feel more confident on hill climbs in the snow or rain.

Many customers have ordered the minivans in G and Z grades. More than 85% of the orders have been specified with the new-generation “Series Parallel” hybrid system. Best Car Web says that Toyota has reduced the price difference between the gasoline and hybrid variants from approx. JPY 500,000 (USD 3,982) in the third generation to approx. JPY 300,000 (USD 2,389) in the fourth generation, prompting more customers to specify their Noah/Voxy as a hybrid minivan.

MPVs may be deemed boring on this side of the world, but they are still a thing in Japan, to the extent that manufacturers have the motivation to release cosmetic versions as separate models. As a result, derivatives of the same MPV typically feature a distinctive character that appeals to different types of customers.

However, some automakers, including Toyota, are concerned about the sales evolution of minivans intended mainly in Japan. A report BestCarWeb published on March 15, 2021, suggests a bleak future for minivans because of the declining birthrate and aging population. In the near- to mid-term future, this has led to companies reducing minivan variants and, in some cases, discontinuation.

In 2020, TMC reportedly sold 69,517 units of the Toyota Voxy, 45,434 units of the Noah, and 26,368 units of the Esquire. Combined, that was an adequate number to remain in the segment, but it was no longer feasible for three similar models.

The Toyota Noah has had the company of its fancier alternative, the Toyota Voxy, since its inception. The Voxy offers an edgier and sportier design and a higher road presence. Things changed in the third generation, though. The Noah and Voxy debuted in January 2014, and a Toyota Esquire “deluxe minivan” followed that October. The new model was aimed at Japanese customers seeking an elegant design. Toyota sold each MPV via a separate sales channel: Voxy at Netz showrooms, Noah at Toyota Corolla dealerships, and Esquire at Toyota and Toyopet outlets.

TMC has made some changes, and since May 2020, it has offered the three models via every sales channel. The Esquire failed to prove itself during its lifecycle, and TMC decided to discontinue it in 2021.