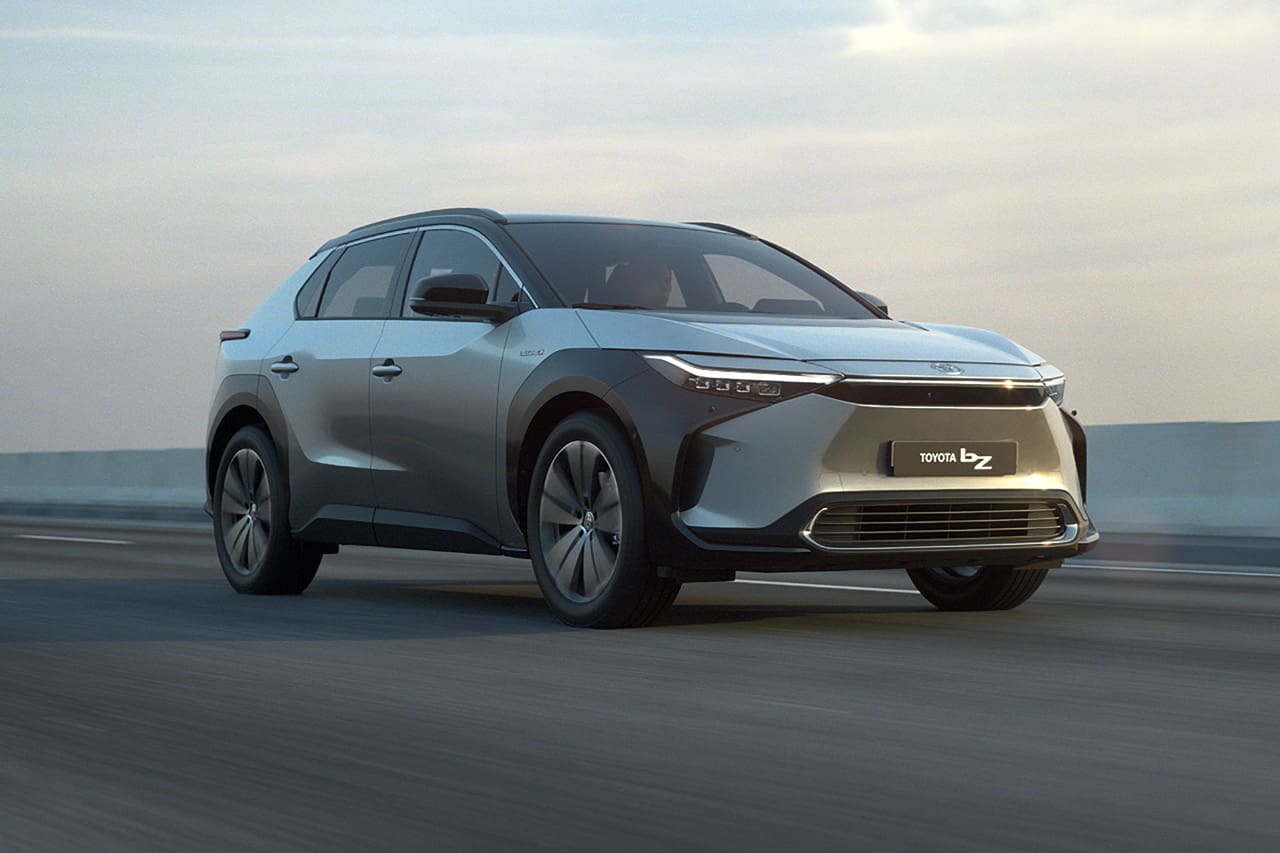 A new Toyota RAV4 Electric isn’t hitting showrooms in the foreseeable future, but a similar-sized Toyota EV with an all-new nameplate has arrived. Under threat from models such as the Kia EV6, Hyundai Ioniq 5, VW ID.4, the Nissan Ariya, and the Ford Mustang Mach-E, Toyota has launched a pure electric alternative to the Toyota RAV4 – the Toyota bZ4X.

The bZ4X celebrated its world premiere as a near-production concept at the Shanghai Motor Show in April 2021. After a few final touches, Toyota unveiled the production car in October 2021. The company has co-developed the model with Subaru, which markets its version of the electric compact SUV as the Subaru Solterra. Parts of the vehicle’s platform, called e-TNGA, are jointly developed with Subaru. Toyota has relied on the partner company’s prowess in AWD technologies for this model.

The Toyota bZ4X doesn’t sport an outlandish design like the Nissan Ariya. However, compared to the Toyota RAV4 with its concave and cleaner nose, slimmer and techy headlights, lower height, sleeker greenhouse, shorter overhangs, and much steeper C-pillars, it’s stylish and breaks new ground for Toyota design.

The interior has a few elements typically not associated with everyday Toyotas, like a fully digital instrument cluster and a steering yoke (which is switched for a regular unit for the U.S. market) like an airplane cockpit. At the same time, mainstream Toyota users would spot similarities to the RAV4, and the cabin feels like an evolutionary departure. In other words, for customers who like their vehicles to be conventional, the bZ4X won’t scare them away!

In addition to the wing-shaped steering or yoke steering, there are two more first-for-Toyota features inside the bZ4X. Toyota has used top-mounted meters, making it easier to view the information displayed in the instrument cluster. Europeans have experienced this kind of layout in Peugeots for years now. The second Toyota-first feature is a rotary or dial-type gear electronic gear selector.

While we are at interior features, another noteworthy mention is a digital key, which allows locking, unlocking, and starting the system from smartphones. It’s possible to share the digital key remotely, say to family members or friends. The bZ4X has an advanced voice-recognition system that understands voice commands for changing cabin temperatures, searching directions, finding POI, adjusting audio controls, and more.

e-TNGA is a dedicated EV platform, and Toyota can build front-, rear- or four-wheel drive electric cars on it. Toyota can alter the length, width, height, and wheelbase as required, and the same goes for the motor and battery pack capacities. The same fixed layout for key components allows creating different powertrain combinations. A front motor allows FWD, while a rear motor supports RWD.

eAWD can be achieved by employing front and rear motors together. In December 2021, the company revealed that it would launch four more bZ EVs following the bZ4X. One can expect a larger Toyota BZ6X with third-row seating to follow in the next few years.

Koji Toyoshima, Deputy Chief Officer, ZEV Factory (Japan), Toyota, has said that the e-TNGA platform’s flexibility and versatility enable the designing and creation of models that are not only able to run purely on electricity but also beautiful to look at and exciting to drive.

The RAV4 has been the chosen one at Toyota for experimenting with EV technology since the 1990s, and before the Toyota Kenshiki Forum in 2020, it was thought that the company was set to finally release the first RAV4 EV for unrestricted sales across continents. The first Toyota RAV4 EV was launched in the first generation in 1996 and the next one, which was co-developed with Tesla, followed in 2012 as a compliance car to meet the state of California’s zero-emissions vehicle mandate.

Like previous-generation Toyota RAV4 EVs, the Toyota bZ4X is available in the U.S. market, where the electric crossover race is hotting up in 2021 with the entry of Volkswagen, Hyundai, and Nissan with new technologies like skateboard platforms. However, the bZ4X isn’t exclusive to California or available only on lease. Its prices (excl. USD 1,215 DPH fee) start USD 42,000 and go up to USD 48,780.

The Toyota bZ4X may not be able to challenge the VW ID.4 on the pricing aspect from 2023. Volkswagen plans to cut the base price of the ID.4 in the U.S. (from $41,230) to around $35,000 now that it has started manufacturing it at its Chattanooga plant.

The Honda Prologue will touch down in early 2024, built on GM’s platform and the Ultium battery technology. Since April 2020, Honda and GM are collaborating on two SUVs, where GM supplies the underlying tech, and the design is from Honda. When it arrives, the upcoming Toyota electric SUV will face one more close rival that has the range, features, and tech to challenge gas-powered SUVs.

On the Toyota RAV4 Prime

Until the Toyota bZ4X arrives in the U.S., the Toyota RAV4 Prime would remain the brand’s only (externally) chargeable SUV drivable solely with electric power. The first-ever Toyota RAV4 PHEV went on sale in the U.S. in summer 2020. The plan was to start with 5,000 units in the first year and ramp it up to 20,000 units in the second year, with the bulk of the vehicles shipped to dealers in 12 ZEV states.

Allocation of the RAV4 Prime, which Toyota Industries Corporation manufactures at the Nagakusa Plant in Japan, has been limited because of supply chain issues. Perhaps with the 2023 Toyota RAV4 Prime, the supply would improve, and more American states would retail the most powerful and fuel-efficient RAV4 in history. Year-to-date (January-June 2022) sales of the RAV4 Prime in the U.S. stand at 10,153 units.

In the first half of 2022, Toyota sold 241,571 APVs in the U.S. While that’s an 11.6% decline compared to H1 2021 (273,123 units) in what were challenging conditions for the global automotive industry, APV sales could significantly improve once the bZ4X becomes widely available and Toyota’s electrified portfolio further expands with the sixteenth-gen Crown and other models in the future.