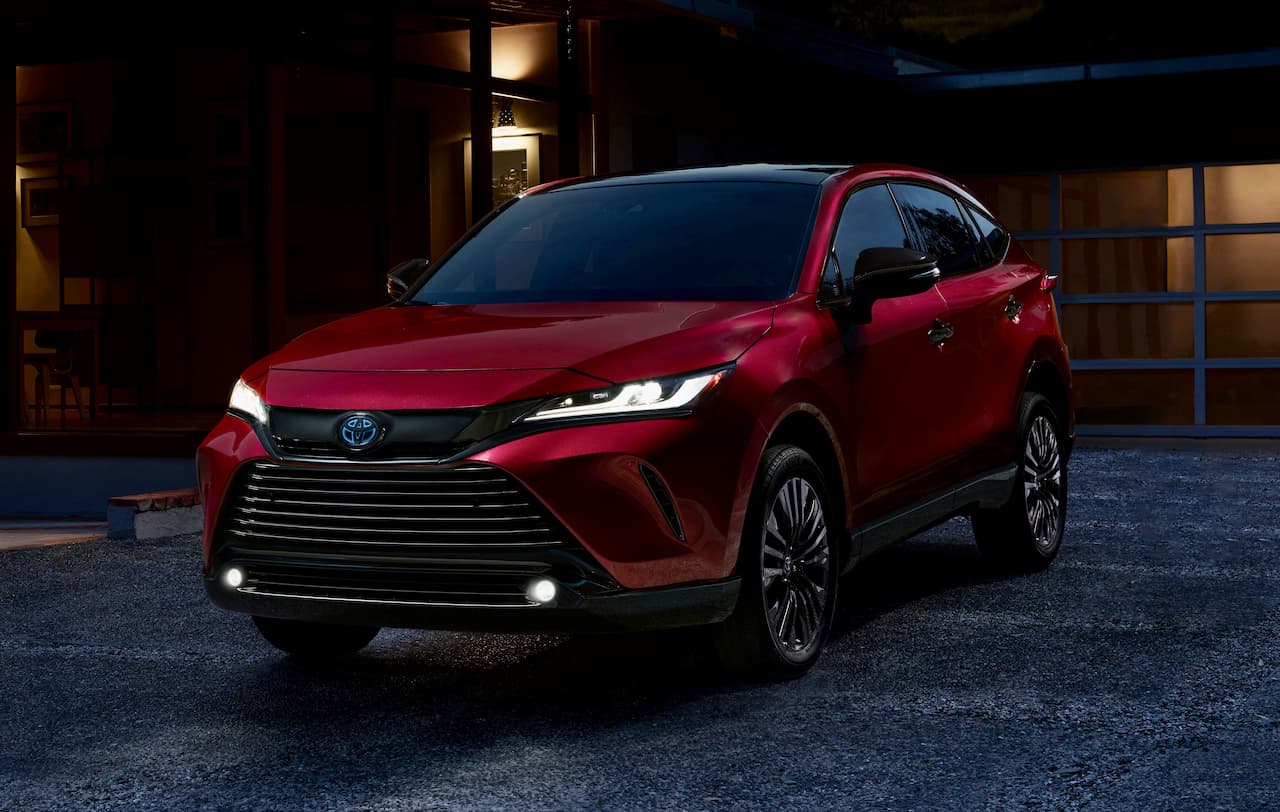 The first-generation Toyota Venza was developed primarily for the North American market, which explained its sleek and minimalist design. The second-generation model, introduced in 2020, was no longer a crossover. Toyota catered to the SUV audience; its manufacturing shifted to Japan, where it is sold as the Toyota Harrier.

The 2023 Toyota Venza Hybrid has been revealed and comes with a new Nightshade Edition and offers more features on other variants. The equipment upgrades are similar to the 2023 Highlander, which gets bigger screens and more kit. Here’s everything we know about the Venza hybrid SUV:

The design of the Toyota Venza remains identical, but the 2023 model introduces the cool Nightshade Edition. The special edition will be available with three exterior shades; Wind Chill Pearl, which replaces Blizzard Pearl for all 2023 models, Celestial Black, and Ruby Flare Red. The grille’s shape is identical but looks with a keen eye, and you would notice an acrylic grille trim.

The Toyota Venza Nightshade Edition also gets black treatment to the mirror caps, door handles, rocker panels, 19-inch alloys, roof rails, and shark fin antenna (optional). The XLE and Nightshade Edition also get LED fog lamps as standard. The cross-SUV continues to look premium thanks to its sharply raked windscreens, sleek LED headlamps, and a full-width LED bar at the rear united by the Toyota badge.

The LE variant continues to roll on 18-inch machine-cut alloy wheels, while the XLE and Limited versions get 19-inch rims. As aforementioned, the Nightshade gets 19-inch wheels with a gloss black effect.

The Toyota Venza interior offers everything that’s expected from a premium SUV. The layout remains identical to the 2022 model and offers many features. The driver’s seat is 8-way power-adjustable on all variants, for starters. For 2023, the Limited variant also gets an 8-way power-adjustable co-driver seat. The driver’s seat has a memory function and automatically moves to the driver’s last set position while entering. Moreover, the front seats also have heating and ventilation (standard on Limited); the system only directs air into occupied seats to save energy.

There’s ample digital real estate in the 2023 Toyota Venza cabin. All Toyota Venza models continue to feature the Toyota Audio Multimedia system integrated into the infotainment screen. The base LE variant gets an 8-inch screen with voice recognition, Bluetooth, wireless Android Auto plus Apple CarPlay, Amazon Alexa, and Sirius XM compatibility. The other variants, including the XLE (previously with the 8-inch screen), Nightshade Edition, and Limited, get the latest 12.3-inch infotainment screen—also seen on the 2023 Highlander, bZ4X, and Lexus models like the NX and RZ.

Music lovers would want to choose the XLE or higher variants. While the LE gets a 6-speaker set-up with an amplifier, the rest of the variants get a 9-speaker JBL music system with a 1200-watt amplifier. For 2023, the LE’s instrument cluster gets upgraded with a 7-inch multi-information display (previously a 4.2-inch unit). A hybrid energy monitor that displays the status of the hybrid powertrain is standard on all variants. The Limited variant gets a fully digital 12.3-inch digital cluster with four visual modes: Casual, Smart, Tough, and Sporty.

The hands-free powered tailgate comes as standard on the 2023 Toyota Venza. Moreover, the SUV offers 28.8 cu ft of the luggage area, which can be nearly doubled to 55.1 cu ft when the rear seats are folded. Toyota says the center stack tray can accommodate even the largest iPhone, while the wireless charger is now a fourth-generation version.

The Toyota New Global Architecture K (TNGA-K) continues to underpin the Toyota Venza. The hybrid measures 186.6 inches long, 73 inches wide, and 65.9 inches tall with the antenna. It has a 105.9-inch-long wheelbase. For perspective, the Ford Escape and the Honda CR-V hybrids measure 180.5 and 182.1 inches long, respectively. The maximum curb weight is 3913 lbs for Venza Limited, while the rest of the variants weigh marginally less.

Unlike the Highlander or the Tundra, the Toyota Venza comes with a single hybrid engine option. The SUV gets a 2.5-liter, 4-cylinder engine assisted by three electric motors. The total system output is 219 hp, of which the combustion engine generates 176 hp. The EPA-estimated combined efficiency is 39 mpg.

Key benefits of this hybrid system can be reaped in low-speed city driving and driving in traffic. In stop-and-go situations, the battery has a higher regeneration rate thanks to frequent braking, and that’s how the vehicle uses electric power at low speeds, reducing emissions. The Venza also takes off from a standstill using electric propulsion.

The EV mode can drive on pure electricity depending on the charge available in the 0.9 kWh battery stored under the rear seats. The RAV4 has a larger 1.6 kWh NMC battery. However, according to Car and Driver, Toyota opted for a smaller 0.9 kWh battery for the Venza.

The Venza comes with Toyota Safety Sense 2.5 (TSS 2.5), a suite of advanced driver assistance systems (ADAS) to increase safety. The vehicle gets a Pre-Collision System with Pedestrian Detection. Toyota says the system has been improved to detect oncoming cars, cyclists, or a pedestrian at intersections while making turns. The system provides audio-visual alerts and can also automatically initiate emergency braking. Moreover, the Emergency Steering Assist works with the Pre-Collision System, enabling steering assist to help drivers make evasive maneuvers.

Toyota has not stated an official release date for the 2023 Venza. However, we expect it to go on sale in the U.S. by Fall 2022. Prices have not been revealed either. For reference, though, the 2022 Toyota Venza starts at USD 33,240 for LE, USD 36,775 for the XLE, and USD 40,730 for the range-topping Limited. Expect a slight bump in prices for the 2023 model over the 2022 variants. Based on the XLE, the Nightshade Edition is expected to slot between the XLE and the Limited variants.