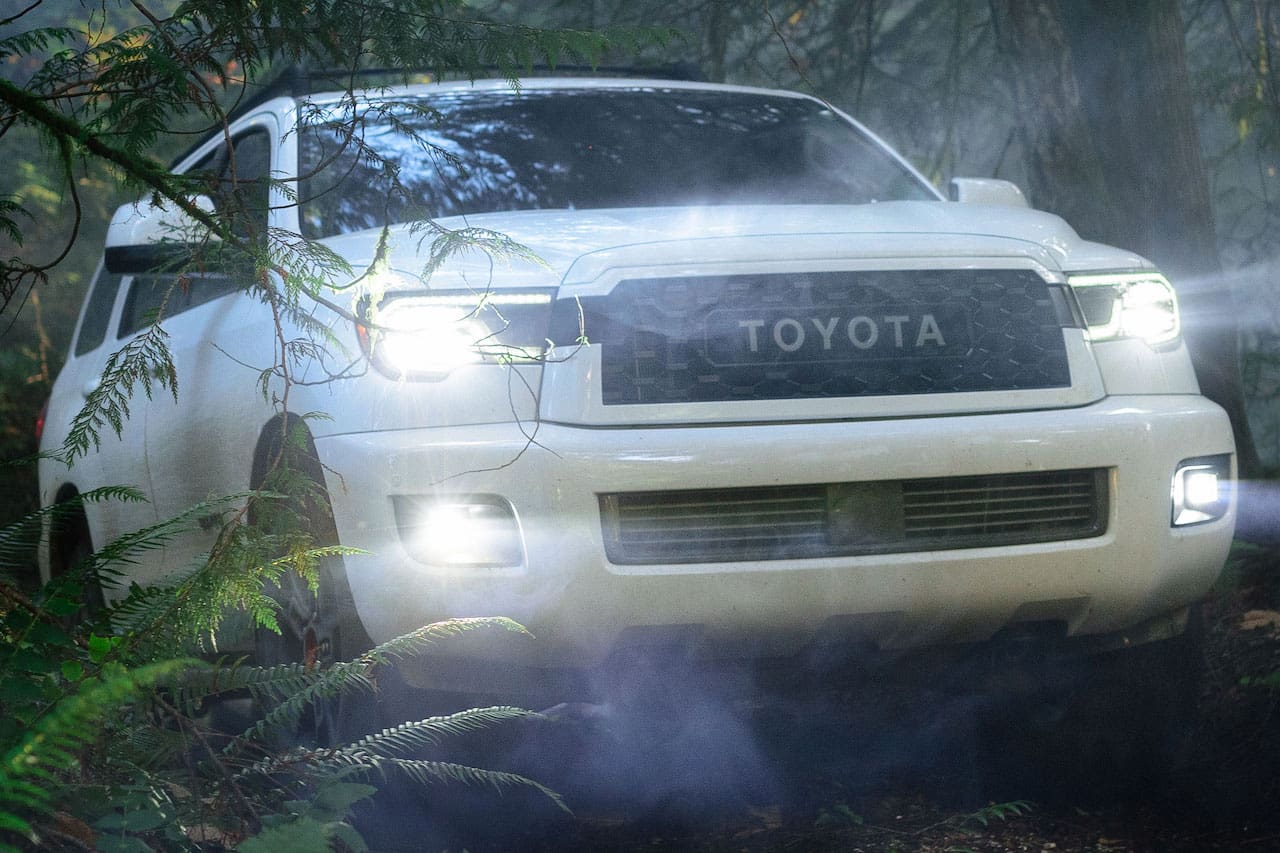 The Toyota Sequoia is an old American favorite with plenty of history. The second-gen Sequoia is nearly thirteen years old and has had a fruitful outing in the market. A modernized 2023 Toyota Sequoia could arrive in showrooms in the second half of next year with an overhauled exterior and a techy interior.

Now that the new Tundra is here, discussion forums and blogs are getting excited about the Toyota frame SUV that is to follow. Like previous models of both vehicles, the new Sequoia will follow in close ties with the latest Tundra. Also, think about it this way: The new Sequoia will serve as an indirect successor to the Land Cruiser 200 in the U.S., where Toyota has not planned to launch the LC300.

The upcoming Toyota Sequoia may see similarities to the Tundra with its front, but it will also have a more poised look than the pickup truck. The SUV will not stray from the current boxy exterior, but sharper styling in line with the taste of SUV customers in 2022 can be expected.

Toyota has been testing its new Sequoia on public roads and YouTube channel Kirk Kreifels has posted a video of a prototype with 18-inch BBS forged alloy wheels. Toyota engineers were probably testing the new Sequoia TRD Pro, which featured dual exhaust tips as well. It looked roughly as large as the 2022 Sequoia, and it’s unlikely that Toyota will launch an extended-length version like Ford’s Expedition and Chevrolet’s Suburban.

Instagram user yousif.hadaya.photography has posted a set of spy pictures that show a camouflaged 2023 Toyota Sequoia from the front, sides, and the rear. Toyota has heavily disguised the test mule, but still, we can figure out an interesting detail. It looks like the next-gen Sequoia will feature vertical headlamp extensions like on the latest Tundra. Thankfully, it doesn’t look like the all-new Sequoia will have split headlamps, considered an eyesore by some Americans. You can check out more pictures in the source link mentioned in the caption of the below image:

Changes on the inside may include a more elegant dashboard, a car-like steering wheel, a free-standing touchscreen infotainment system with wireless Apple CarPlay and wireless Android Auto, a more intuitive driver information display, and a head-up display. The equipment list may include new comfort creatures such as massage seats and a heated steering wheel.

The 2023 Toyota Sequoia could inherit the i-Force Max hybrid powertrain of the new Tundra. This powertrain produces 437 horsepower and 583 pound-feet of torque in the truck. It’s a combination of a 3.5-liter twin-turbo V6 gasoline engine and an electric motor. A 288V Nickel-Metal Hydride (Ni-MH) battery will likely power the motor, and a 10-speed automatic transmission should be responsible for transmitting power to the wheels in the SUV.

The 2023 Toyota Sequoia could start around USD 52,000. The main rivals will be the Ford Expedition, which is getting a facelift for MY2022 in the coming months, and the Chevrolet Tahoe, which underwent a full model change for MY2021 in December 2019.

What is the 2023 Toyota Sequoia release date?

Toyota could have the 2023 Sequoia in showrooms during the second half of next year.

What will be the 2023 Toyota Sequoia price?

Which full-size SUVs will be the 2023 Toyota Sequoia alternatives?

Rivals will include the Chevrolet Tahoe, the Ford Expedition, and the Dodge Durango.