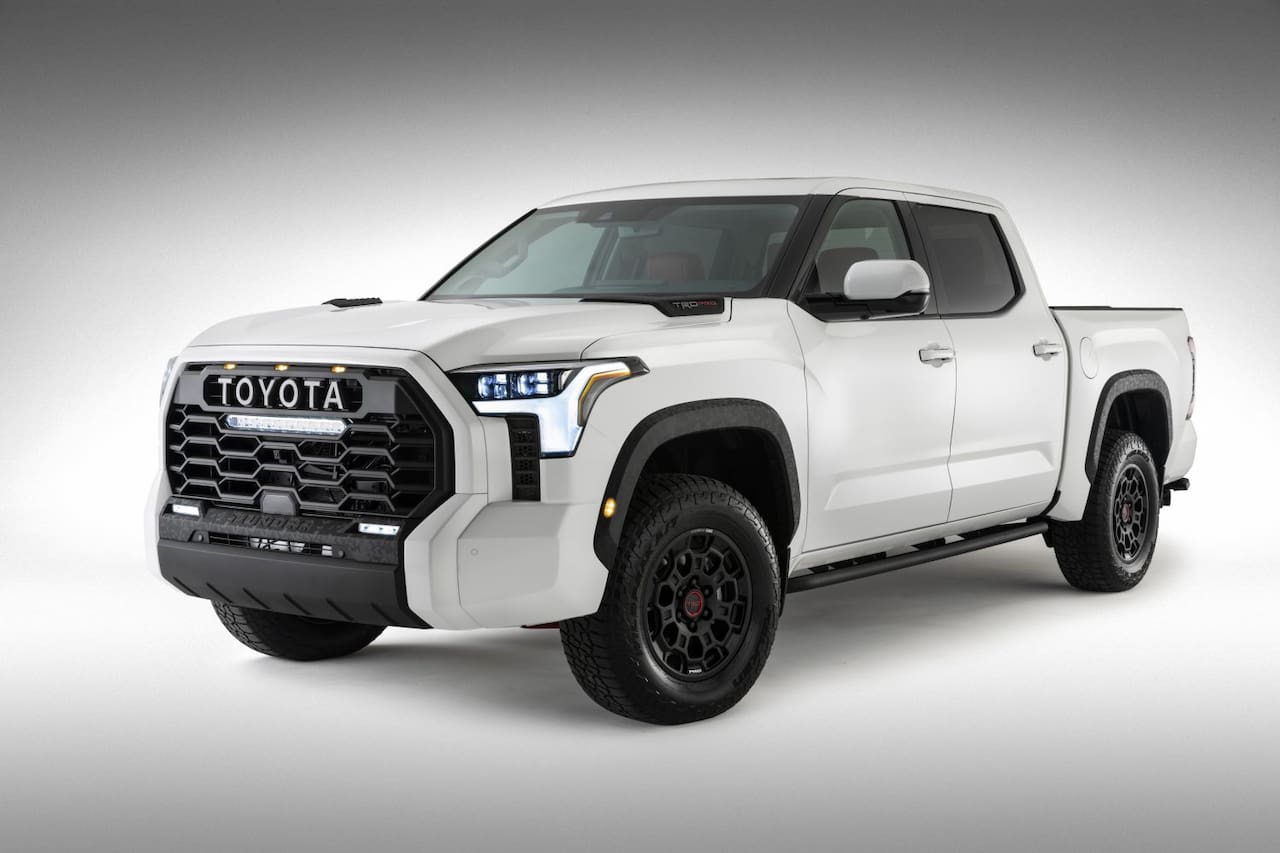 The exterior of the 2022 Toyota Tundra has been revealed. The MY2022 update is the first significant redesign for Toyota’s Ford F-150 rival in fifteen years.

Here are five things you need to know about the next-gen Tundra 2022:

Extensive changes for the Tundra in tow

Robby Findlay, Chairman, Toyota National Dealer Advisory Council, told autonews.com in an interview in February this year that the 2022 Toyota Tundra will be a “world-beater.” Findlay’s claim strengthens hopes for revolutionary changes in the 2022 Toyota Tundra. With the model change, Toyota will “really go toe-to-toe with the domestic trucks,” Findlay added.

The 2022 Toyota Tundra packs heaps of design enhancements at the front and sides. The revamp makes the full-size pickup pretty much unrecognizable. The fascia has a new high-tech and more robust appearance. Sleek, all-LED headlamps with a T-shaped LED DRL, a new hexagonal grille with large honeycomb openings, a wide central LED light bar, two horizontal LED fog lights, and three clearance lights, a noticeably chunkier bumper, and a more muscular hood are the highlights. “Toyota” in block lettering adds to the dominating character of the all-new full-size pickup.

The three marker lights positioned above the grille indicate that the 2022 Tundra is no less than 80 inches wide. NHTSA’s regulations require vehicles with a width of 80 inches or more to have front identification lamps to indicate the presence of a wide vehicle.

The sides also carry a whole new look, although the differences are not as extensive. The greenhouse with a contemporary design, beefed-up wheel arches, and more stylish door panels with a slightly deeper recess in the lower section are the visible improvements here. Needless to say, Toyota will offer multiple styles with a different design to the grille, wheel, bumpers, and a few other parts.

Toyota has confirmed with a teaser that it plans to offer the 2022 Tundra with a dual-pane panoramic sunroof. The same video reveals that the company has carried over one of the main features of Tundra into the third generation – power sliding rear window. This feature can increase the pickup’s practicality when customers need to transport an extra-long item. You can watch the teaser video on this link.

Customers can expect three different grille options on the incoming Tundra, one in a simple design for the basic trim, one in a ‘shiny’ finish helped with dollops of chrome connoting the premium trim, and finally, the sportive design with a dark finish reserved for the TRD Pro you see in the featured image. While the current model uses five lug nuts, images show six lugs on the next-gen truck. One inference is that it has improved payload and towing capacity (old model: up to 10,200 pounds). Spy shots suggest that the CrewMax version’s cargo bed could be bigger in the next generation, possibly 6.5 ft-long.

The 2022 Toyota Tundra, expected to be offered with an optional hybrid powertrain, may get a new rear suspension in the interest of ride comfort. Spy pictures published by Autoblog show one of the test mules fitted with a rear coil-spring suspension instead of a leaf-spring suspension.

TFLtruck.com has also published spy photos of the 2022 Toyota Tundra test mule with a coil-spring suspension. It reached out to Dan, an independent mechanic fixing Toyotas since 1995, to understand the development. He said that the rear axle and suspension geometry appear to be very similar to those of the Toyota Land Cruiser 200, the production of which ends this year.

The next-gen Toyota Tundra test mule looked close to the production version, and so, this could be the type of suspension that makes it to the final product.

The Toyota Tundra hybrid was hinted at in 2020. When asked by CarBuzz if there was room for a variant above TRD Pro, Sheldon Brown, the Chief Engineer at Toyota Motor North America for R&D, said, “electrification makes sense.” “Truck owners value torque and initial response,” Brown added, referring to either the pure electric or hybrid-electric Toyota pickup truck.

The next-gen Toyota Tundra would ride on the same platform as the 2022 Toyota Land Cruiser, the next-gen Toyota Prado, and the 2022 Lexus LX. Developed for body-on-frame vehicles, the ‘TNGA-F’ platform is internally called ‘F1’ and reportedly not designed for a V8 engine.

Reports say that a twin-turbo V6 hybrid powertrain developing 480 horsepower and 642 pound-feet of torque is in the works for the 2022 Lexus LX. The 2022 Toyota Tundra hybrid may feature the same powertrain, albeit with model-specific modifications for the power and torque.

The Toyota Tundra Hybrid could offer customers a nice balance of economy and power, delivering an EPA-estimated fuel economy of about 30 MPG.

Meanwhile, TFL Truck speculated more than one hybrid variant of the Tundra. A plug-in hybrid could be part of the variant mix, and if that indeed is the case, the Toyota Tundra Prime would give company to the Prius and RAV4 in the Prime family. While Toyota has said nothing about a Tundra PHEV, it has confirmed that the launch sequence in 2021, without naming the models, includes a plug-in hybrid besides two battery-electric vehicles.

Robert (Bob) Carter, Executive Vice President – Sales, Toyota Motor North America, revealed to Motor Trend that the company would offer the 2022 Tundra with two newly developed powertrains. Carter said that one of them is “a core powertrain” that offers more horsepower and torque than the outgoing model’s i-Force 5.7-liter V8.

As for the other, Carter said that it “will blow you away,” It is safe to assume that he was referring to a technologically superior powertrain, and thus, an electrified one. Could it be even more advanced than a full-hybrid powertrain, perhaps a pure electric powertrain? Possibly.

On June 15, 2021, Toyota announced an ‘iForce Max’ powertrain, calling it the next generation of the ‘iForce’ powertrain. It released a picture that shows the cover of its engine featuring iForce Max branding with a blue surround. The iForce Max is probably the first-ever hybrid powertrain of the Toyota Tundra.

Significant changes are coming in the 2022 Toyota Tundra interior, including a cleaner center console, an intuitive infotainment system, and a larger driver information display. Various new convenience and driver assistance (Toyota Safety Sense) technologies should be part of the full model change and among the expected factory-fitted gizmos is a 360-degree camera system. In fact, spy pictures have indicated that Toyota plans to offer this camera system, which Toyota marketing calls ‘Bird’s Eye View.’

A new teaser of the 2022 Tundra interior reveals that the attractions include a floating touchscreen infotainment system. Like the system of the 2022 Land Cruiser, it could measure 12.3 inches diagonally. In addition, the teaser confirms Apple CarPlay (is available even in the 2021 Tundra), but wireless Apple CarPlay integration should be available.

We doubt Toyota would skimp on something basic like wireless Apple CarPlay and wireless Android Auto in its flagship pickup. The company may pack OTA update support and a web browsing function also in the new infotainment system.

Another interesting piece of detail the interior teaser reveals is that Toyota has equipped the 2022 Tundra with a chunky A-pillar driver-side grab handle. This feature is unavailable in the 2021 Tundra. Right below the grab handle, it looks like the all-new model has a squarish speaker of the audio system, possibly a JBL unit. The IRVM has no reflection, suggesting that it’s a display that can serve the feed of the backup camera. The cropped teaser (below) shows a small light indicator, suggesting more strongly that we are looking at a digital IRVM.

An interior spy shot Motor1 has published suggests that the 2022 Tundra will feature a conventional instrument cluster with analog gauges in the base trim. The center console design is less cluttered but practical, retaining the physical controls for essential functions like climate control and volume adjustment. The base trim is likely to have a smaller screen integrated into the dashboard.

The next-gen Tundra will have large vertical AC vents instead of the small circular ones. The dashboard is upright and chunky, just the way traditional pickup drivers would like it. Lastly, Toyota has fitted an A-pillar grab handle on the passenger side as well.

Toyota should have noticeably improved the quality of materials in the Tundra with the MY2022 update. The company will likely switch to better-quality plastics, higher soft-touch surfaces, and more durable switches and knobs. It may dial down on shiny surfaces as well, adopting a more low-key look instead.

A new teaser shows the sporty red upholstery of the 2022 Tundra TRD Pro with variant branding on the backrests of the front seats. Toyota has used perforated leather material for the front seats of the TRD Pro variant. The other photograph reveals a mobile phone holder-cum-charger on the right side of the gearshift lever. The wireless charger adheres to the Qi standard, which means that it will support all the latest Apple iPhone and Samsung Galaxy smartphones.

A drive mode selector located behind the gearshift lever will allow the driver to conveniently change the pickup’s driving characteristics as per the prevailing situation. In addition to the basic Drive mode, the driver will be able to drive in MTS (Multi-Terrain Select), DAC (Downhill Assist Control)/Crawl, or Tow/Haul mode.

Toyota plans to expand to around 70 electrified models globally by 2025. This future lineup will feature 15 dedicated BEVs, including seven carrying the bZ (Beyond Zero) brand moniker. In addition, Toyota intends to bring electrification to its pickup truck lineup in the near future, including hybrid and BEV powertrains.

Toyota Motor at the debut of the bZ4X concept in Shanghai, April 2021

Introduced in 1998, the Toyota Tundra became the first full-size pickup truck made by a Japanese automaker in North America when it entered production in May 1999. Toyota made it in Indiana before relocating the production to Texas in 2008.

The Toyota Tundra’s American roots have spread over time, with everything from design to development and core component (powertrain, transmission, and more) production localized. The current Tundra’s design work primarily took place at the company’s Calty Design Research Centers in Newport Beach (California) and Ann Arbor (Michigan). In addition, Toyota did some engineering work at an in-house facility in Ann Arbor. The 5.7-liter V8 engine rolls out of a Toyota factory in Huntsville (Alabama), and the transmission is manufactured in North Carolina.

Despite 2.2+ million units sold to customers, the Tundra is not as popular as competitors from American automakers, like Ford’s F-150 and Chevrolet Silverado. The American competitors have outsold the Tundra by nearly 5-7 times in the last decade.

What is the 2022 Toyota Tundra release date?

TopElectricSUV expects the all-new Tundra on sale in late 2021.

Will Toyota offer the 2022 Tundra as a Hybrid?

Toyota is likely to offer a Tundra Hybrid in the U.S. this time with a 3.5L V6 engine, to compete with the F-150 PowerBoost hybrid.

What is the projected 2022 Toyota Tundra Hybrid price?

Update – Pre-orders in Japan have been suspended because of an issue. Details in the introduction of the story. 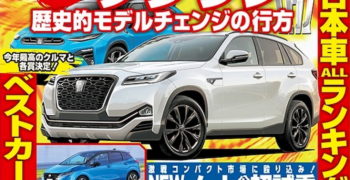 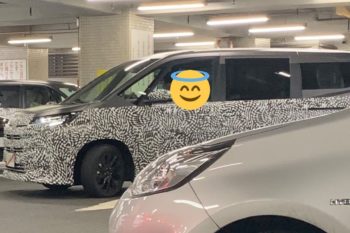 Update: Story updated with new information about the line-up and release date.