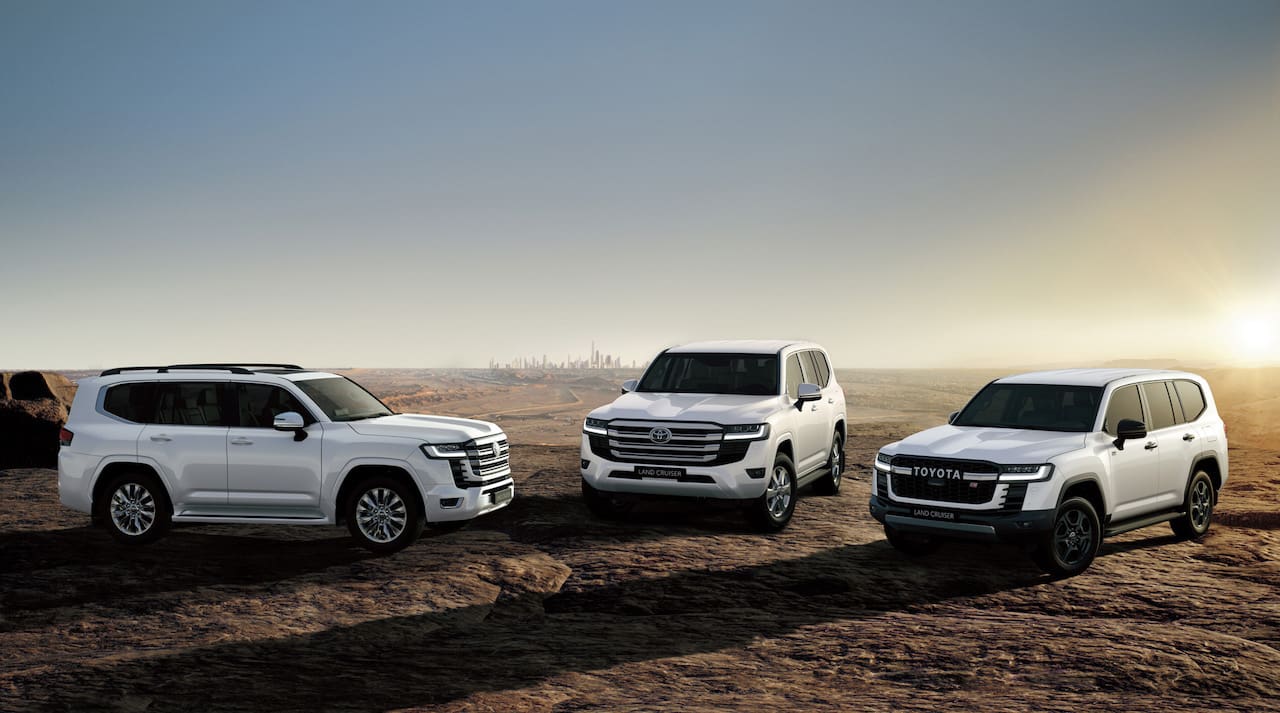 Soon after the launch in 2021, Toyota had stated on its Japanese website that there’s a 4-year waiting period for the new Toyota Land Cruiser series in the local market. After receiving an overwhelming amount of orders for the SUV, the brand had issued an apology, confirming a waiting period of close to half a decade.

Toyota unveiled the highly anticipated 2022 Land Cruiser 300 in Dubai on June 9, 2021. Internally called ‘Toyota J300,’ this new-generation model is the successor to the J200 Series introduced in September 2007.

In this story, we discuss everything known about the Toyota LC300. TopElectricSUV learns of a hybrid variant in development for the future, explaining the model’s tracking. Note that Toyota has not officially confirmed a hybrid for the LC family, and with the long waiting period, the electrified variant may not emerge before 2024.

The 2022 Toyota Land cruiser has a familiar silhouette but in a more stylish avatar. At the front, the three-eyed headlamps are slimmer, straighter, and more advanced technologically; the radiator grille has a cleaner design in a larger footprint and four horizontal slats instead of three, and the hood features a tubular recess in the center. The featured image shows multiple bumper designs, including a more rugged type for a ‘GR Sport’ variant.

On the sides, the greenhouse is stylish with a new rear quarter glass. The front windows also have a new design, but the change is noticeable. The outside rearview mirrors have a curvy shape. The LC200, in comparison, had a simpler greenhouse and ORVMs. At the rear, the tail lamps are slimmer, wider, and more advanced, and there’s no chrome strip on the tailgate to maintain a clean design. Overall, the Toyota Land Cruiser looks more upmarket and presentable to the elites and VIPs, who’d also form many customers worldwide.

Toyota has spruced up the interior of the Land Cruiser with a dashboard that looks slimmer, a more compact, car-like steering wheel, a floating widescreen infotainment system, and a neater floor console. There are many, even though fewer, analog controls, but that is just the way that hardcore Land Cruiser fans would prefer their car. The door handles have been borrowed from the new Toyota Venza (also called Toyota Harrier).

12.3-inch touchscreen infotainment system, head-up display, wireless charging, four-zone climate control system, six USB ports (two in the front and four in the rear) are some of the main comfort and convenience features.

The LC300 is the first Toyota vehicle to feature a Multi-Terrain Monitor that displays the obstacles ahead from the driver’s point of view on the central display. It gives a real-time view of the road surface beneath and immediately surrounding the vehicle, and the position of the wheels. A new Multi-Terrain Select system automatically selects the most suitable driving mode after judging the quality of the driving surface.

For models like the new Land Cruiser, Tundra and the next-gen Toyota Prado, TMC has developed a new TNGA platform version, called TNGA-F. The frame of the 300 Series model is 200 kg lighter than its predecessor. In what’s a world-first feature, an electronic Kinetic Dynamic Suspension System (e-KDSS) is available in the LC300. Toyota says that it provides great off-road performance, thanks to a larger suspension stroke achieved by effectively disabling the front and rear stabilizer bars.

On the Toyota Land Cruiser Hybrid

Sean Hanley, the VP – Sales and Marketing, of Toyota (Australia), had said that the company plans to fully electrify its Australian line-up, including the Land Cruiser and Prado off-road SUVs, by 2030, as per a CarsGuide report dated November 7, 2022. Australia and Japan could be among the world’s first markets to get the Land Cruiser Hybrid.

We will continue to evaluate the market in Australia and strive towards increasing to a powertrain mix that includes a form of electrification across our vehicle range by 2030, excluding GR and performance models.

Australia is one of the biggest markets for the mammoth off-roader, and the company will have high hopes for the next-gen model in the region. Given the usually extended lifecycle of the LC family, it is obvious that the Land Cruiser would live beyond 2030 and take on electrification.

Previously, the company had confirmed that the On February 10, 2021, Toyota Motor said that by 2025, Toyota and Lexus models will come with electrification.

Between now and 2025, Toyota and Lexus models, globally, will have an electrified option.

Toyota on February 10, 2021 via Toyota pressroom

Previous reports have said that a mild-hybrid system is an optimal solution for entry variants because full-hybrids are comparatively heavier, and the stock Toyota Land Cruiser is a leviathan. A mild-hybrid system is comparatively lighter and could knock off a chunk of the SUV’s emissions (at least during its regulatory testing) thanks to its start-stop system and regenerative braking with energy recuperation, while protecting the price.

Japanese media has also speculated that the 3.5-liter V6 is the engine variant that would be fully-electrified. This could be the same i-Force Max powertrain from the Toyota Tundra that also packs an electric motor. In the Toyota Tundra, this hybrid powertrain generates swathes of power and torque. Headline figures are 437 hp and 790 Nm (583 lb ft), with power sent to all the wheels through a 10-speed automatic transmission.

The electric motor could draw power from a 288-volt Nickel-Metal Hydride (Ni-MH) battery and improve the vehicle’s efficiency at low speeds with the aid of regenerative braking. Like in all Toyota hybrids, the electric motor will greatly help in reducing emissions and improving fuel economy as it offers driving limited distances in EV mode.

A report Best Car published on July 30, 2021, suggested that Toyota is developing a new 2.5- or 3.5-liter diesel-hybrid engine. On November 5, 2022, Best Car indicated that the company will use two motors to assist this engine, both running on energy stored in a lithium-ion battery pack. The Land Cruiser Hybrid could get this system in markets where diesel is preferred.

The new Toyota Land Cruiser has earned an impressive 5-star rating at the Australiaasian New Car Assessment Program (ANCAP) on January 20, 2022. This safety rating applies to all variants launched in Australia and New Zealand, except the GR Sport which is unrated.

The SUV garnered an 89% score in adult occupant protection, 88% in child occupant protection, 81% for vulnerable road user protection and 77% for safety assist systems. The Land Cruiser’s foundations are robust as it is based on the new TNGA-based GA-F platform, which has reduced the SUV’s weight by 200 kg and improved its structural rigidity.

Sales of the Land Cruiser might not be impacted by soaring fuel prices, but they must be electrified to ensure environmental compliance. Sooner or later, emission norms will force Toyota to offer it as a hybrid. With lower consumption, the Toyota Land Cruiser Hybrid would allow customers to travel longer distances on a full tank.

We’ll keep updating this page as we get new information.

What is the 2022 Toyota Land Cruiser release date?

The new Toyota Land Cruiser 300 is now on sale in global markets including the Middle East and Japan.

What is the Toyota Land Cruiser Hybrid release date?

Toyota is reportedly developing a Land Cruiser hybrid version but we’re not confident about its launch before 2024. 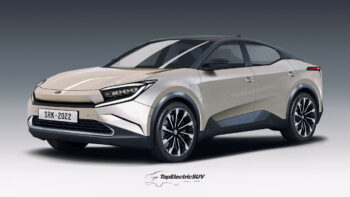 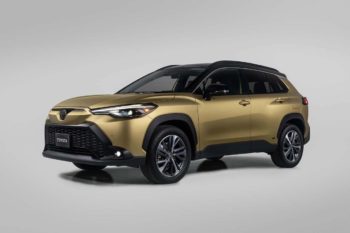 Here’s everything you need to know about Toyota’s newest hybrid car in the U.S.