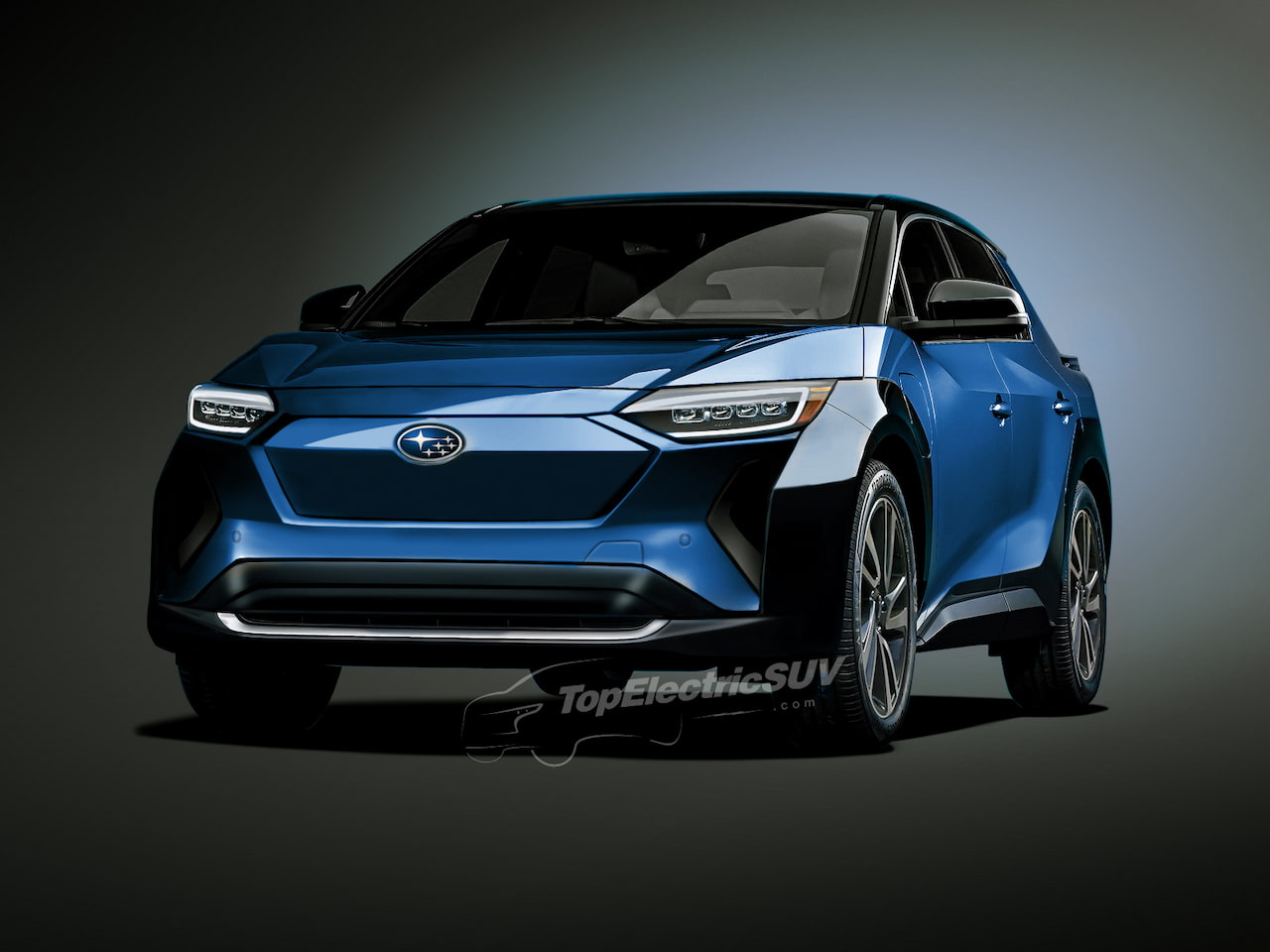 Last month, the Subaru Solterra was announced as the first Subaru electric car, referred to by the media previously as the Subaru Evoltis. The Solterra is not an electrified Subaru Forester or a ‘conversion’ of an existing Subaru. While automakers traditionally release ICE-BEV conversions first, where they swap out the engine and gearbox of existing models for batteries and motors, Subaru has developed the Solterra from the ground up as an electric vehicle.

Along with the Solterra’s announcement, Subaru released a teaser showing the outline. Based on that image, TopElectricSUV.com has worked on a rendering to offer readers a realistic preview of the electric SUV’s final design (set as the article’s featured image).

Subaru says that it created the name “Solterra” by joining the word “Sol” and “Terra,” which mean the “Sun” and the “Earth,” respectively, in Latin. The new electric SUV will compete with the likes of Nissan Ariya, Hyundai Ioniq 5, and the VW ID.4, a new breed of electric vehicles.

In this story we take a close look at what has been said or reported on the electric car.

The C-segment is the most popular class worldwide and gives automakers a very high level of scale and decent margins. That explains why Volkswagen, Nissan, and Skoda focus on electric cars in the C-segment first – consider the VW ID.3, the VW ID.4, Nissan Leaf, Skoda Enyaq, and the Nissan Ariya. In line with the industry trend, Subaru plans to launch a C-segment BEV first, and it will be an SUV top hat.

The Subaru Solterra looks closer to the Toyota bZ4X than originally thought. Our rendering and the teaser show the Subaru EV featuring an identical silhouette and a unique headlamp design in a very similar shape, suggesting that sheet-metal changes, if any, would very limited.

Expect a long wheelbase with short overhangs that leads to a sporty design yet a very spacious cabin. The interior will likely be roomier than a similar-sized ICE Subaru. The Solterra could share features like a steer-by-wire system, fully digital instrument cluster, large touchscreen infotainment system, and solar charging system with the Toyota model.

Like the Toyota bZ4X, the Subaru Solterra may feature a compact steering wheel that sits lower than a traditional design. This would allow the driver to view the information displayed in the instrument cluster easily and clearly. In addition to a longer wheelbase and an unconventionally positioned steering wheel, a minimalist dashboard design could offer an increased sense of space.

At a technology briefing on January 20, 2020, in Japan, Subaru showcased a life-size concept previewing what a Subaru electric SUV could look like. The concept featured a crossover-like body with sharply designed panels in compact packaging.

The Subaru Solterra will mark a new design chapter for the brand with an evolution of the “Dynamic x Solid” design language. The design would express a dynamic and strong feel. At the same time, some features such as the extended body protectors (first noted on the Viziv Adrenaline Concept of 2019) would give it the familiarity of a Subaru vehicle.

The above photograph shows the component structure of the platform with the drive system mounted under the hood and the battery pack embedded in the floor. It suggests that the Subaru Solterra may not feature a front trunk or a ‘frunk,’ but it does hint at a flat floor that should allow a lounge-like interior.

Similar to the Forester

Subaru has said that the mid-size electric SUV will be similar in size to the Subaru Forester. The electric SUV will be based on the e-Subaru Global platform co-developed with Toyota and called e-TNGA by the partner company. Speaking to autonews.com in 2019, Kazuhiro Abe, Senior Vice President – Product Planning, Subaru, had said that the Subaru EV would have dimensions similar to the Forester or the Toyota RAV4. Subaru says in the Solterra announcement that it has co-developed not just the platform but the entire vehicle with Toyota.

Abe had revealed that the Subaru Electric Car might come in a single-motor front-wheel-drive variant and a dual-motor all-wheel-drive variant appealing to a wider band of customers and needs. Toyota has confirmed that it will be possible to offer e-TNGA models in the front-, rear- or four-wheel drive layout.

Toyota and Subaru have agreed to develop a C-segment BEV SUV for sale with their own badges. Subaru is borrowing Toyota’s technical resources for the Solterra instead of indigenously developing it because it wants to keep the investment and risk low. Tomomi Nakamura, Representative Director, President, and CEO, Subaru had said this in an interview with autonews.com. Concurring that the upcoming electric SUV is a compliance car to adhere to California’s emission regulation, he suggests that the project is driven as much by the law as by the market demand.

Having sold a wide range of hybrid EVs for years now and a few pure EVs recently, Toyota possesses expertise in electrification that Subaru lacks. While Toyota may have a higher contribution to the platform’s development due to its better know-how with regards to electrification, Subaru will leverage its strengths in areas like all-wheel drive and control.

There are still some uncertainties about how fast the market for electric vehicles will grow, how far the cost of batteries will come down, and so on. Under these circumstances, we believe there is an opportunity in efficiently using our relatively limited resources as an automobile manufacturer in model development by switching from in-house development to joint development.

With Subaru in the driver seat for the development of the all-wheel drive technology, expect the Solterra to be capable of tackling snow, mud, and gravel with ease. While it won’t be an extreme, rock-crawler, don’t take it for a high-riding wagon, for it’s a Subaru. It could feature the dual-function X-Mode system of ICE Subaru models that allows the driver to adapt the vehicle’s components for specific driving conditions like snow/dirt and deep snow/mud.

There will be quick acceleration response, obviously. Not only that, our long-cultivated AWD capability will be further enhanced by precise, highly-responsive electric motors, which will lead to an increase in Subaru’s strengths such as stability, driving dynamics, and handling.

In December 2020, Subaru confirmed that it would unveil a mid-size electric SUV that sits on a platform shared with Toyota in the first half of 2021. The Solterra, discussed in the story, is the sister car to the Toyota BZ4X and one that Subaru is referring to.

The Toyota bZ4X will be assigned to a ‘Toyota ZEV Factory’ in Japan and another factory in China. The Subaru mid-size electric SUV should also roll out of the same plants. The China-made units may have a battery system jointly developed with CATL, as is the case with the bZ4X.

The Subaru Solterra will go on sale in the first markets by the middle of 2022. The first Subaru electric car has received the green signal for launch in the USA, Japan, Canada, China, and European countries. In the USA, expect prices to start at around $40,000 at launch.

Subaru is concerned about the effect of the American state of California’s ban on new gasoline and diesel vehicles on its sales, as per a report from jp.reuters.com. “We cannot easily change the policy, so we will first proceed with our roadmap,” Nakamura said (translated) in October 2020. He added that the Subaru electric cars co-developed with Toyota would “do well.”

Subaru’s focus in the U.S. market

The Solterra could be a game-changer for Subaru, allowing it to revamp the brand image with higher quality and more advanced technologies not offered on existing models. Subaru has announced that it will focus on U.S. customers and prioritize improving quality, both of which should lead to the Solterra receiving special attention during development.

Subaru plans to offer vehicles with new hybrid and pure electric powertrain technologies in North America before other regions, so it may launch the Solterra in the U.S. market first. The company will continue rolling out new vehicles designed for U.S. customers from the very outset. These models, possibly including the Solterra, will come with Advanced Driver Assist Systems for safety, connected car technology, and AI-enabled technologies, as per its recent announcement.

The sister model Toyota bZ4X has received the green signal for launch in the Trans-Tasman markets. In New Zealand, a launch is under consideration, as Subaru and the New Zealand subsidiary discuss the model’s availability.

We are thrilled that Subaru has announced its first electric vehicle, however we are still in discussions with Subaru Corporation about availability for the New Zealand market. Future electric vehicle projects form part of ongoing dialogue between Subaru of New Zealand and the factory.

In Australia, the local subsidiary is holding talks with the factory to understand if it can get enough allocation, suggests a report from goauto.com.au. More details should emerge in the coming months on the global launch timeline when the Solterra premieres.

When is the Subaru Electric Car release date?

Subaru is expected to launch its electric car Solterra in the U.S. by mid-2022.

What will be the Subaru Electric car price?

Subaru may price the Solterra from around $40,000 to compete with offerings from VW, Hyundai & Nissan.

Which electric SUVs will the Subaru SUV compete with?