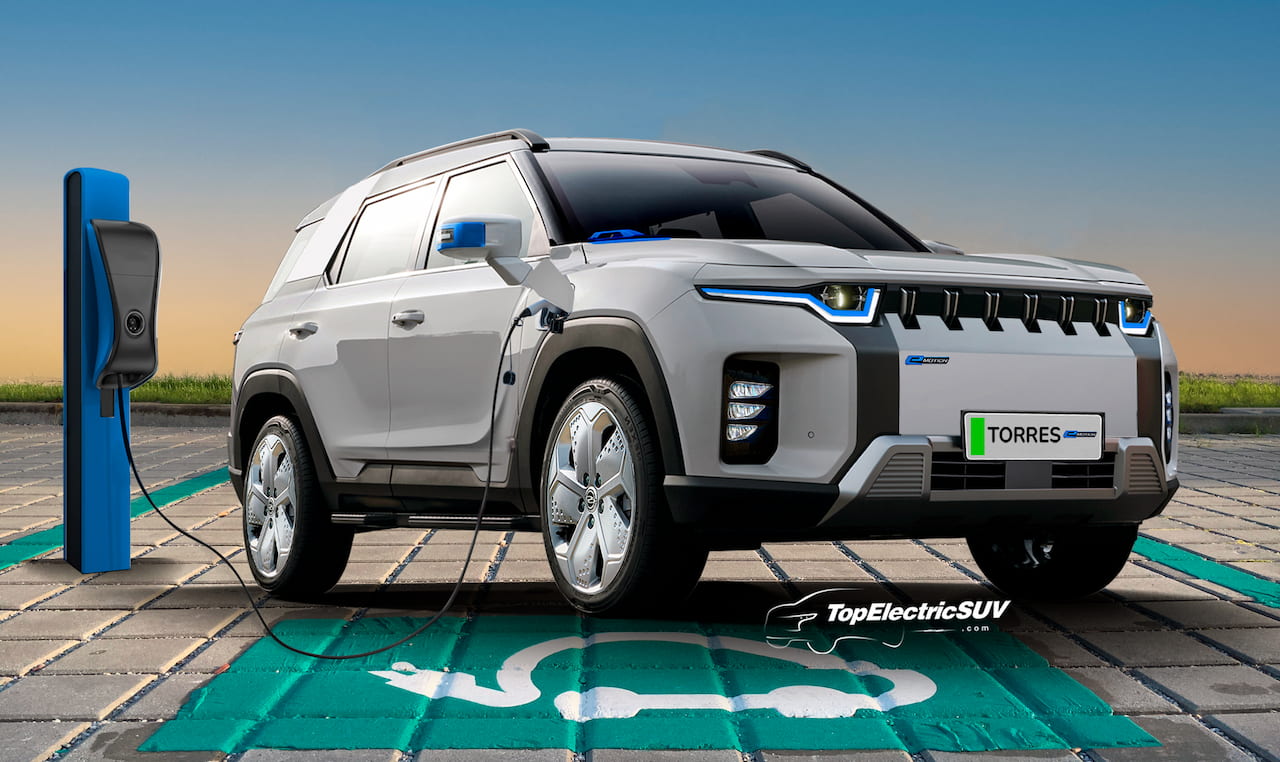 SsangYong has unveiled its SUV previously referred to by the codename J100 as the ‘Torres.’ A SsangYong Torres electric (codename: Ssangyong U100) will follow, and unlike the ICE variant, will be available in Europe, positioned above the Korando e-Motion. Here’s everything we know about it so far:

The SsangYong Torres electric will embody the new design language of its donor model, called ‘Powered by Toughness.’ It’d be a mix of tough and contemporary design elements. At the front, the oddly shaped headlamps with the six-slot grille should apply to the electric variant, but with a closed snout and a more aerodynamic bumper. Our rendering shows a premium, three-element fog lamp design and a modified lower intake with horizontal grille bars among the visual changes.

On the sides, expect the same trapezoidal wheel arches, closed-off aero wheels, a straight beltline, large windows, a chunky C-pillar, and a vertical quarter glass behind the C-pillar, giving the windscreen a wraparound look. Like on the Land Rover Defender, a C-pillar-mounted storage box could be available. The charging port could be above the right-side front wheel arch. At the rear, a tailgate garnish mimicking a spare tire for an authentic SUV styling and Range Rover L405-like vertical tail lamps will likely be the design highlights in addition to the wraparound glass.

The interior of the Torres EV should look nearly identical to the gasoline-powered model. The dashboard would have a slim profile and be an unusual blend of traditional and modern bits, housing an old-school vertical (on the driver side) and compact horizontal (central and passenger-side) AC vents, wood and metal trim, a digital instrument cluster, and a dash of ambient light. Two touchscreens, a 12.3-inch (infotainment control) unit on the top and an 8-inch (comfort control) unit at the bottom would restrict the usage of buttons and other physical controls to the minimum. Another highlight would be a compact but still tough- and modern-looking four-spoke steering.

The electric variant of the Torres could offer slightly better cargo space. For reference, the ICE variant has 703 liters of cargo space, and on folding down the second-row seats, that number increases to 1,662 liters. Forward Collision Warning (FCW), Lane Departure Warning (LDW), Lane Keeping Assist (LKA), Driver Attention Warning (DAW), Safe Distance Warning (SDW), and eight airbags, including a driver’s knee airbag, are some of the active and safety passive safety features we expect in the Torres electric.

There’s not much that we know about the SsangYong Torres electric’s specifications at the moment. SsangYong has partnered with BYD for using its Blade battery technology in the electric SUV. What that means is the Torres electric will be available with one or more battery packs consisting of LFP (Iron-based) cells. BYD has advanced rapidly with the LFP chemistry, and is now commercially using them in cell-to-pack (CTP) and cell-to-body (CTB) formats as well.

Blade batteries have successfully passed nail penetration tests without emitting smoke or fire. They have maintained a 30-60°C temperature under the same conditions in which a lithium-ion battery’s temperature would have exceeded 500°C and violently burned. Blade batteries have passed other extreme tests like being bent, crushed, heated in a furnace to 300°C, and being overcharged by 260% without causing a fire or explosion.

SsangYong will likely build the Torres Electric alongside the Torres on Assembly Line 1 at its Pyeongtaek plant in South Korea. The company started the series production of the Torres on June 30, 2022. It may start manufacturing the electric variant around a year from now.

The Ssangyong Torres EV will hit the European markets towards the end of next year. It could cost around EUR 45,000 onwards and compete with the MG Marvel R and the Skoda Enyaq iV.

For the European market, an EV version of Torres, project name U100, will be introduced towards the end of 2023.

The gasoline-powered Torres has received a great response in South Korea. On June 15, 2022, SsangYong announced that it garnered more than 10,200 pre-orders on the first day of sales. That’s the most the company has ever received for a new model on the day it started taking pre-orders. The gasoline-powered model will likely go on sale in SsangYong’s home market in July 2022.

What is the SsangYong Torres electric release date?

SsangYong will launch the Torres electric in Europe towards the end of 2023.

What will be the SsangYong Torres electric price?

The Torres electric could cost around EUR 45,000.

Which models will be the SsangYong Torres electric rivals?

The SsangYong Torres electric will compete with the Toyota bZ4X, Subaru Solterra, and the Skoda Enyaq iV.