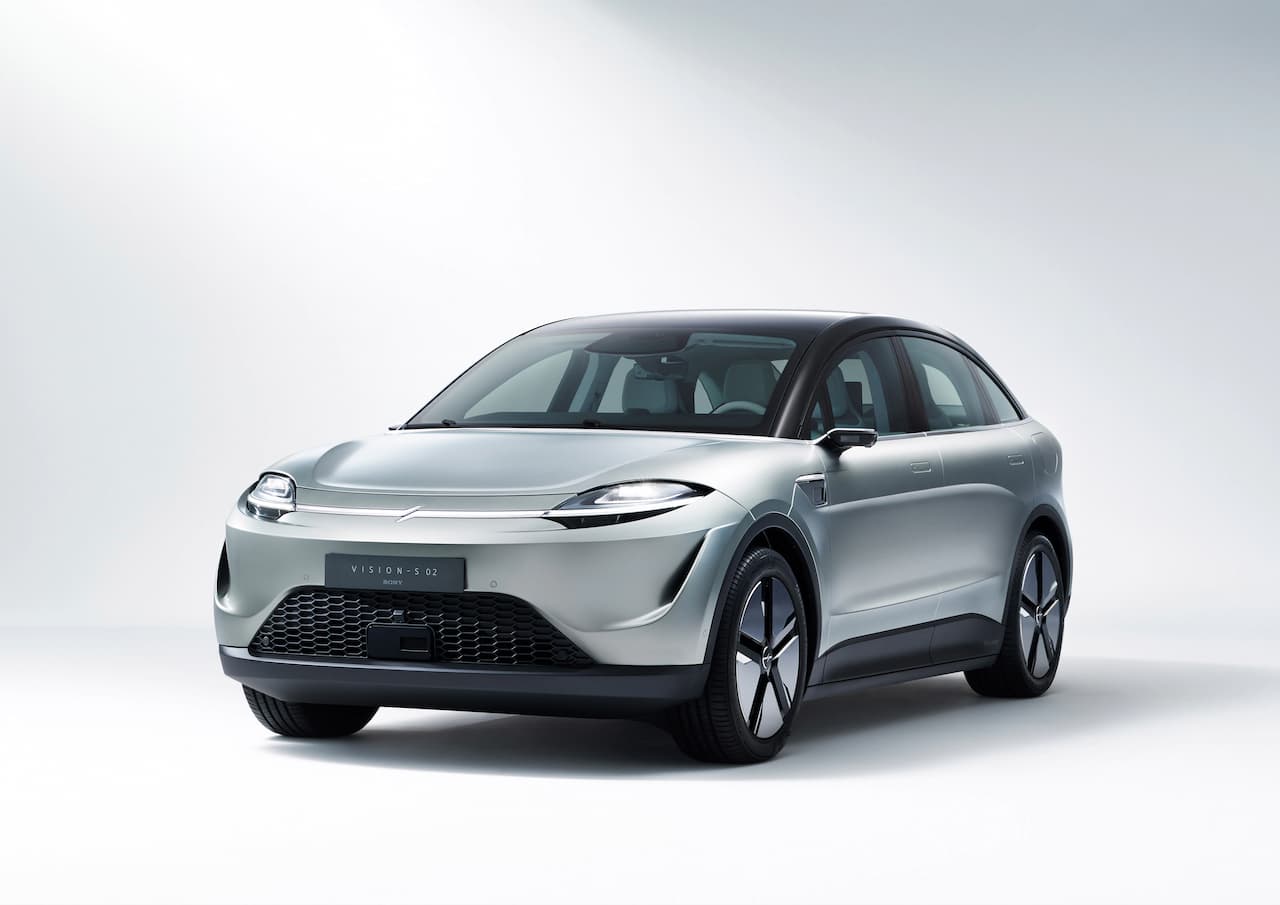 Sony is a household name for gadget freaks and PlayStation users. And now, a Sony electric SUV could become a reality as the Japanese consumer electronics manufacturer has announced its foray into uncharted territory — electric cars. At 2022 CES, Sony announced two electric cars, the Vision-S 01, a sedan to take on the Tesla Model 3, and the Sony Vision-S 02, an SUV to challenge the likes of the Tesla Model X, Audi e-tron, and the BMW iX. It’s the SUV that we’re focusing on today.

The Sony electric car models will be sold under a separate entity called Sony Mobility, which will be a dedicated sub-brand for Sony EVs.

Both the Sony concept cars sport similar design elements, with the only difference being the Sony Vision-S 02’s beefy SUV proportions. The design is minimalist, with clean lines, smooth surfaces, and distinct visual elements. The Sony Vision-S 02 flaunts teardrop-like LED headlamps upfront that is united by a chrome-embellished strip. The strip runs across the Sony electric SUV’s width and merges at the center to form the distinctive Sony brand logo that we’re used to seeing on PS4s and Bravia TVs. There’s lower air intake to cool the batteries, and the sides of the bumper also get air ducts to cool the brakes.

The side profile is clean and simple, with no overdone cuts and creases. You can see flush-fitting door handles, two character lines, and black side body cladding that reaffirms its intentions of being an SUV. At the rear, the coupe-like sloping roofline is hard to miss, and there’s a full-width LED tail lamp which again nicely contours into the Sony brand logo at the center.

Sony has partnered with technology giants like Qualcomm, Nvidia, and Blackberry, so the cabin of the Sony electric SUV is an absolute tech-fest. It has six touchscreens. Three are integrated into a single panel on the dashboard, one is housed in the center console, and there’s one behind each of the front seat backrests for rear-seat entertainment. The two-spoke steering wheel has controls for the driver’s display and infotainment, there’s a center armrest with storage, and it has three rows of seating. The ‘360 Reality Audio’ compatible seat-integrated speakers create a 3D sound field. According to Sony, the system “provides an immersive music experience as if the passengers are surrounded by the live performance of a favorite artist.”

That’s not it. The Vision-S 02 “recognizes and analyses the surrounding environment in real-time,” thanks to sensors installed around the vehicle. Sony is currently conducting final verification tests of the car’s Level 2+ autonomous features in Europe. The ADAS features are enabled with high sensitivity, high-res, CMOS image sensors, and LiDAR sensors transmitting information for drivers to judge the driving environment accurately. That said, the SUV will be 5G enabled and be capable of receiving over-the-air (OTA) updates. Lastly, streaming is enabled on all the screens in the cabin, and gamers can even play PS4 using a remote connection to the console at home.

To build the Sony electric SUV, the brand has partnered with pioneers of the automotive space like Magna-Steyr, ZF, Bosch, and Continental. In terms of length, at 4,895 mm, the Sony electric SUV sits between the Tesla Model X (5,036 mm) and the Ford Mustang Mach-E (4,739 mm). With a heavy battery pack sitting between the axles, the SUV weighs 2.47 tonnes (5,467 lbs).

In terms of powertrain, it gets two 200 kW electric motors, one on each axle, that help it achieve its 180 kmph (112 mph) top speed. Its sedan sibling is capable of 240 kmph thanks to a more aerodynamic design and less weight. The Vision-S 02’s 0-100 kmph time is also expected to be slightly slower than the sedan’s 4.8-second figure.

On January 21, 2022, a report from Automotive News revealed that Sony is keen on producing its Vision-S 01- and 02-based EVs. Izumi Kawanishi, the head of AI robotics at Sony Corporation said that Sony has to be prompt in actualizing its vision for EVs and any kind of delay will be a ‘great challenge.’ He also established a correlation between how the evolution of cars has been similar to the transformation of phones.

Sony Mobility, the arm under which Sony EVs will be manufactured, was reported to have started looking for technology partners to streamline its business for operations to begin as soon as possible. Kawanishi will serve as the senior general manager of Sony Mobility. For the concept EVs shown at CES 2022, Sony had partnered with Magna Steyr, Almotive, Valeo, and Bosch. However, to manufacture cars for the market, Sony would have to pump billions of dollars into development, batteries, and manufacturing.

Sony Honda Mobility Inc. is the new joint venture created by the two Japanese brands to develop the next generation of highly connected electric vehicles. The brands announced on June 16, 2022, that USD 7.4 million have been committed by the two brands in total, with an equal 50:50 investment ratio. The new announcement comes after the two brands signed a memorandum of understanding on March 4, 2022, with the intent of setting up the JV to develop, manufacture and sell “high value-added” pure electric vehicles.

Honda’s contribution to this business will be environmental and safety technologies, mobility development capabilities, vehicle body manufacturing, and after-sales service and management. The company’s upcoming e:Architecture dedicated EV platform developed in-house is speculated to become useful for the new venture. The JV will also benefit from Sony’s expertise in imaging, sensing, telecommunication, and network and entertainment tech.

According to Sony and Honda’s joint press announcement, Honda is expected to manufacture the first EV from the new JV company at its vehicle manufacturing plant. The new JV company would plan, design, develop, and sell the EVs but not own and operate manufacturing facilities. Moreover, the companies have confirmed that the expected SOP (Start Of Production) date of the first EV is 2025.

Significance of the Sony-Honda partnership

The blend of Sony’s and Honda’s expertise has a greater overarching significance, according to an Autocar report dated March 10, 2022. As cars become more software-based, brands like Sony have a more significant role in automotive development. Sony’s software expertise combined with Honda’s engineering and manufacturing prowess would result in something genuinely futuristic.

Similar collaborations are seen with other brands; Stellantis has partnered with Foxconn, which makes Apple’s iPhone, to develop digital cockpits, while Chinese automotive giant Geely has partnered with Chinese technology powerhouse Baidu to create the Jidu brand, which would specialize in self-driving technologies.

Electric vehicles require less maintenance than traditional ICE vehicles, and exploring digital services presents revenue opportunities for both the manufacturer and dealer. Sony will charge customers for movies and video games in its high-end EV, CEO Kenichiro Yoshida said in an interview after visiting Honda’s Marysville factory, The Wall Street Journal reported on June 6, 2022. He was visiting the the tooling, welding, and paint shops at the plant, which could be tooled to produce the Sony electric car.

Yoshida feels cars are turning into tech products, as they get increasingly digital during the transition to electric power. Sony can apply a business model similar to its PlayStation video game, in which it sells the console and hardware at a premium price and introduces chargeable services like PlayStation Plus and PlayStation Now (PS Now) throughout the ownership cycle.

We could see advanced versions of the new Sony electric car concepts by the end of 2023. “This is going to be a relatively high-priced car,” Yoshida said about the first Sony EV planned for launch. Expect the SUV to be priced in the region of GBP 85,000 (EUR 97,548/USD 102,132), approximately the price of the Tesla Model X initially. The market launch could take place as early as the first half of 2025.