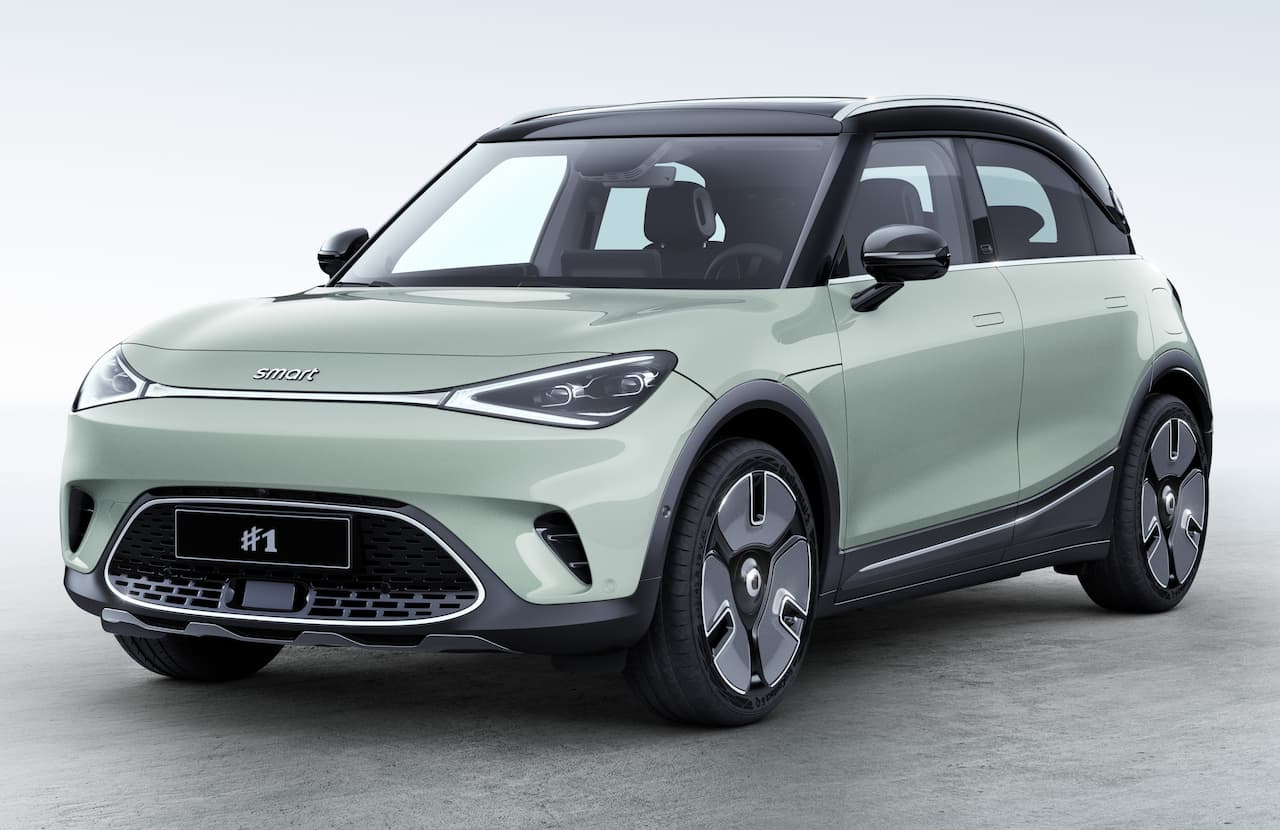 smart has taken a step in a new direction with the smart #1, which made its debut on April 7, 2022. Mercedes & Geely’s urban mobility brand has developed a compact SUV that packs a modern design and comes with plenty of bells and whistles. It has been introduced in two variants; Edition 1 (launch edition) and Premium.

Continuing its tradition of using odd names and perhaps taking it to the next level, smart announced ‘smart #1’ as its new compact SUV. This is the new nomenclature for smart models: hashtag followed by a number. Like hashtags in social media, smart sees its car setting new trends in the auto industry.

Here’s everything we know about the Mini Countryman Electric rival:

The smart #1 mixes funky looks with a tall-boy stance. At the front, it features curvy and mean-eyed headlights and a concave faux grille. The clean and smooth body with no interrupting character lines underlines the simplicity and eco-friendliness of the electric SUV. The lack of B-pillars amplifies that feeling. The vertical side air vents make it look sporty.

Even though there’s no traditional radiator grille, a large lower intake channels the air to cool the battery. The Matrix LED headlamps are integrated into the Y-shaped light band, which also appears at the rear. The full-width LED taillamp is reminiscent of Mercedes EQ cars; smart may have taken this one from the Mercedes parts bin. The EV also has skid plates (front & rear), while the 19-inch wheels are aero-optimized. Frameless doors and flush door handles make it look genuinely premium.

Gold accents on the launch edition

The launch edition smart #1 model packs more flair than the Premium variant. It comes with a gold-colored roof and golden accents on the side body cladding, grille surround, skid plates, front-seat headrests, dashboard, and the door trims. It also has a funky ambient lighting strip on the dashboard with a chequered flag design. A similar pattern is carried onto the wheels.

When tested at the China Automotive Engineering Research Institute in Chongqing, the #1’s drag coefficient was 0.29 Cd, which smart claims is an achievement, especially compared to its rivals. Overall the electric compact SUV has a fresh take on design; it appears like a funky and cheerful little city car that could appeal to the youth.

There’s beautiful harmony between the exterior and the interior designs. Shapes seen on the outside seem to have been fluidly incorporated into the cabin. Taking center stage is the 12.8-inch touchscreen infotainment which is perched atop the dashboard above the ac vents. There’s also a 9.2-inch full HD digital cluster and a 10-inch Head Up Display.

The cluster displays essential information like speed, driving range, outside temperature, gear position indicator, drive modes, etc. The larger infotainment screen all other functions like navigation, climate control, lighting, and sound, among others. The minimalist cabin is devoid of physical buttons.

The smart #1 ticks all the right boxes when it comes to features. The EV comes with a panoramic sunroof, ambient lighting with 64 colors and 20 illumination levels, premium Beats audio with 13 speakers (including a subwoofer), and an amplifier. The EV also has ADAS; there’s a radar upfront for adaptive cruise control. It also features blind-spot monitoring, traffic jam assist, and more.

The smart electric SUV sits on the Geely SEA dedicated EV platform. Daniel Lescow, Vice President of Global Sales, Marketing & After-Sales, smart, describes it (via LinkedIn) as “super-compact on the outside and big on the inside.” Announced in 2020, the SEA can handle various applications, including vehicles from A-, D- and E-segments and even light commercial vehicles. FWD, RWD, and AWD configurations are also possible with either single-, dual- or tri-motor set-ups.

SEA is an open-source platform, and Chinese carmaker Geely announced that it is in talks with B2B and B2C customers, aside from plans to deploy it across its brands. Geely owns Volvo, Polestar, Lotus, Proton, Lynk & Co, Zeekr, and London Electric Vehicle Company. It is a major shareholder in Mercedes-Benz Group AG. The SEA platform uses high-speed 800-volt charging, and the first EV based on the SEA platform is the Zeekr 001.

In terms of performance, the smart #1 is no slouch. The electric motor has been tuned to produce 272 PS (200 kW) and 253 lb ft (343 Nm). The EV has a limited top speed of 112 mph (180 km/h). smart is also providing an all-wheel drive (AWD) option in select markets like Austria and Switzerland, the details of which are yet to be shared.

smart is using nickel-cobalt-manganese battery chemistry for the EV instead of the increasingly popular lithium-ion-phosphate cells, which offer longer battery life—not in terms of driving range but with respect to charge/discharge cycles, and are less expensive.

Production of the smart #1 takes place in Xi’an, China. At the global premiere on April 7, 2022, the smart said that EU homologation is expected to be completed in the second half of 2022.

On May 25, 2022, smart announced that the #1 will become available to order in the UK in December 2022 and customer deliveries will start in mid-2023. The company has planned 1,000 Launch Edition units to celebrate the start of European sales, all closely mirroring the #1 concept, and it has allocated 100 cars for the UK.

On the inside, the smart #1 Brabus features an exclusive Brabus black color scheme, headrests with a Brabus logo and red accents, a Brabus-branded lower steering wheel spoke, microfiber velvet sports seats with red stitching, and metal pedals. The touchscreen infotainment plays an exclusive Brabus welcome clip when turned on. Powering the Brabus variant could be two motors, one at the front and one at the rear, producing a system power of around 400 hp. We will know more about this AWD model later this week.

What is the smart electric SUV release date?

The #1 is expected to be delivered to customers by early 2023, following homologation procedures in the second half of 2022.

Which SUVs would the smart electric SUV compete against?

The smart electric SUV would rival the Mini Countryman Electric.

What is the expected smart #1 price?