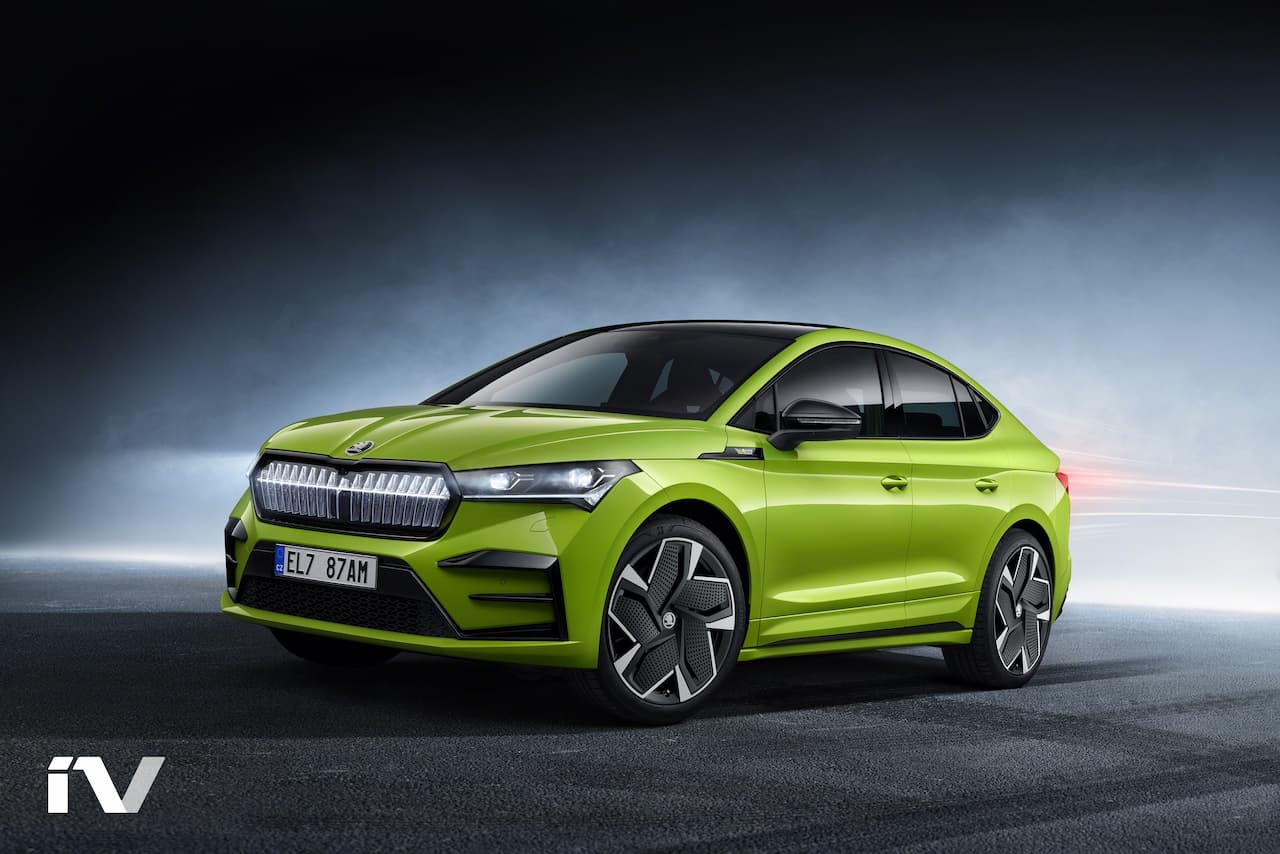 The Skoda Enyaq Coupe RS iV stands out from the non-RS Enyaq variants. The bumpers are RS-specific and look more aggressive. The RS badge can be seen on the wing, the window frame is gloss black, and the coupe gets the RS-exclusive Mamba Green paint. The alloys are unique with standard 20-inch ‘Taurus’ wheels and optional 21-inch ‘Vision’ wheels with an ‘Aero’ design for increased aerodynamics.

The SUV-Coupe gets the classic Skoda Crystal Face upfront, also available on the Enyaq SUV. The RS sports a gloss black radiator grille surround and comes standard with 131 LEDs for an illuminated effect instead of the chrome grille on the essential Enyaq Coupe iV. In addition, the coupe features Matrix LED headlights, which have 24 LEDs in each high beam and are designed to reduce glare for approaching traffic.

When you unlock the car, the Matrix LEDs also produce a welcome show on the road, similar to the Audi E-tron. The sloping coupe roofline of the Enyaq RS looks spectacular. Gloss black Skoda lettering on the tailgate, a gloss black diffuser with a full-length reflector, and LED tail lights with dynamic indicators with the ‘Coming/Leaving home function’ are among the highlights at the rear.

The Skoda Enyaq Coupe RS iV’s cabin is similar to the non-RS variant, but sporty elements make it stand out. The main attraction in the cabin is a multi-layered dashboard with grey stitching, an RS-badged steering wheel, and a 5.3-inch driver’s display.

The RS model is offered with a raft of premium features as standard. Carbon fiber-effect ornamental strips on the dashboard and door trim, aluminum pedals, sport seats with integrated headrests, and the RS symbol are meant to make the cabin feel truly upmarket. The RS Lounge and RS Suite are two Design Selections.

With the RS Lounge design selection, the seats are upholstered in black Suedia microfiber with lime piping and contrast stitching. The floor mats and steering wheel have the same contrast stitching. To complement the aesthetic of the seats, the RS Suite has black perforated leather upholstery, with the same material on the steering wheel and a comparable material on the dashboard.

It would be hard to point out any cost-cutting in this cabin. The Skoda Enyaq Coupe RS iV comes with ambient lighting, piano black center console, panoramic sunroof, three-zone climate control, etc. There are eleven optional packs if that isn’t enough. The ‘Seating Comfort’ package, for example, includes electronic seat adjustment and a massage function.

To improve aerodynamic’s, Skoda has lowered the chassis of the Skoda Enyaq Coupe RS iV by 15 mm at the front and 10 mm at the rear. The Sportline variant is also hunkered down. However, it’s surprising that the RS has a slightly higher coefficient of drag (0.248) compared to the non-RS Enyaq Coupe (0.234), despite this effort.

The RS’ twin-electric motors have been tuned to deliver 299 hp (220 kW) and 339 lb-ft. The performance figures are a testament to the RS version’s character — 0-62 mph takes just 6.5 seconds while top speed is rated at 112 mph. The rest of the range is electronically limited to 99 mph.

The Skoda Enyaq Coupe RS iV comes under the 80x configuration, which means it gets a larger 82 kWh battery that can charge at 135 kW via a CCS connector. It only takes 36 minutes to get from 10-80%. Skoda will also provide a 7.2 kW wall box charger for residential use, which will allow the battery to be charged in 13 hours. The maximum range is 309 miles.

Although most owners will not tow loads with their Skoda Enyaq Coupe RS iV, it’s good to know that Skoda has mentioned the towing capacity. The RS coupe has a towing capacity of 1,400 kg, 200 kg greater than the 60 and 80 variants of the same EV. The towing capacity is nowhere near some of the electric trucks we have seen recently, but the Skoda can get small jobs done.

Customers also get an augmented reality head-up display that projects information on two different screens. The driver can see speed, traffic signs, navigation, and driver assistance information projected above the dashboard. The directional arrows for navigation are presented higher up.

At the time of reveal, Skoda Auto board member Martin Jahn said that in the first couple of months after the Skoda Enyaq Coupe iV goes on sale, only the RS version will be available, and the regular non-RS version will come at a later date.

The Skoda Enyaq Coupe RS iV is the most powerful RS version produced by Skoda and it provides the excellent joy of the ride and it’s exclusive. We want to offer exclusivity to customers, so in the first couple of months we will only offer the RS versions.

Skoda Auto Board Member Martin Jahn at the premiere on Jan 31, 2022

Bookings opened in the UK from February 17 onwards. Skoda encourages potential buyers to reserve a Skoda Enyaq Coupe RS iV as soon as possible, as the first batch is expected to sell out quickly. However, two months down the line, the coupe is still on sale on Skoda’s UK website. Prices of the Skoda Enyaq Coupe RS iV start at GBP 52,305 (USD 65,833) OTR, and deliveries will begin in July.

On February 14, 2022, manufacturing of the Enyaq Coupe RS iV began at Skoda’s mother plant in Mlada Boleslav, Czech Republic. According to Skoda, 2,000 personnel construct more than 120 Enyaq Coupe iVs every day and the Enyaq iV, Octavia, and Octavia iV.

Customers in the U.S. are unlikely to get a taste of any Skoda or VW electric coupe anytime soon. Skoda does not sell cars in the U.S., but Volkswagen does. Even then, Volkswagen has prioritized its ID.4 for American customers with no official launch plans for the VW ID.5, which is the direct cousin of the Enyaq Coupe iV.

What is the Skoda Enyaq Coupe RS iV price?

What is the Skoda Enyaq Coupe RS iV release date?

Skoda Enyaq Coupe RS iV deliveries are expected to begin in Europe by July 2022. Skoda does not sell cars in the U.S.

Skoda Enyaq Coupe RS iV will compete with the Tesla Model Y and the Volkswagen ID.5 in the European market. 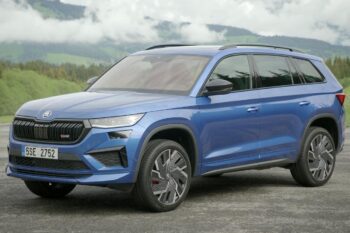 Skoda’s popular three-row SUV will finally get electrification in the next generation.

The Skoda Enyaq RS iV will share its underpinnings with its coupe sibling.