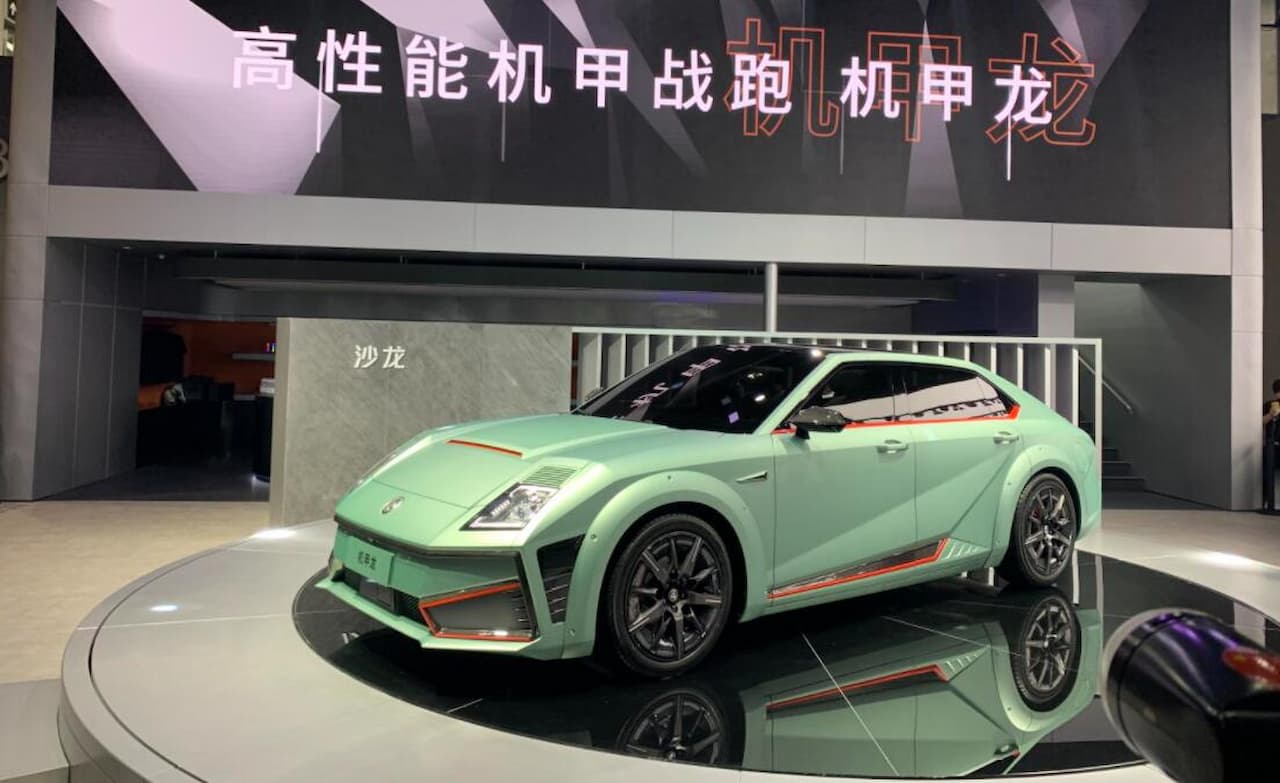 China’s Great Wall Motors which is breaking into Europe this year with the Wey and Ora brands, debuted its global premium electric vehicle brand called ‘Saloon’ at the 2021 Guangzhou Motor Show (19-28 Nov 2021). Saloon will target global sales of 200,000 vehicles globally by 2025 with one new launch each year, as per a report by China’s Financial Associated Press (cls.cn), which adds in another report (cls.cn) that the second product launch comes towards the end of this year.

Saloon will launch electric cars, SUVs, MPVs, Coupe, and Cross body style vehicles in the price bracket of 400,000 to 800,000 yuan (USD 62,000 to USD 125,000) globally. This puts Saloon’s upcoming electric cars and SUVs as rivals to the Tesla Model S and X, Mercedes EQC and upwards, BMW i4 and upwards and Audi e-tron models.

The first Saloon electric car was unveiled at the show and announced as a limited edition with 101 units on offer. Called the Saloon Jijialong (Saloon Mecha Dragon in English), it is an electric sports coupe with 4 doors, priced at 488,000 yuan (USD 76,693).

The Mecha Dragon has a length of 5.2 meters and its appearance resembles that of mechanical armor as per the manufacturer. It features dual-motor all-wheel drive with a maximum power of 543 hp and 750 Nm of torque (553 lb ft), with 0-100 km/h (0-62 mph) taking only 3.7 seconds.

While the battery capacity was not announced (a report from CNEVPost says it is a 115 kWh battery pack), Saloon says the Mecha Dragon will achieve 802 km (501 miles) on a full charge (as per China’s CLTC standards) and thanks to 800V/480 kW fast charging, a 10-minute charge can deliver 401 km (250 miles) of range.

SALOON is an independent automobile company newly incubated by GWM. It intends to create a new subdivision of “Mecha Technology” and enter the luxury all-electric vehicle market.

Great Wall Motors in an announcement on 22 November 2021

Saloon had revealed what looked like digitally created interior images of the Mecha Dragon, but had kept the car’s interior locked during the premiere. Autohome has now published real-life shots that offer a peek inside the car. The cabin looks the same as in the officially released pictures.

Brown upholstery dominates the cabin, to give it a luxurious styling. A freestanding ultra-wide display covers the majority of the dashboard’s width, and the instrument cluster is not a part of this panel. The latter is a separate display positioned further back for more clarity during daytime. We can see the two slim, horizontally positioned central AC vents and the silver strip beside them that flows down to the floor console.

According to China’s Financial Associated Press, the deliveries of the Mecha Dragon in China will begin in the first half of this year. Details on the Saloon brand’s overseas plan should emerge later.