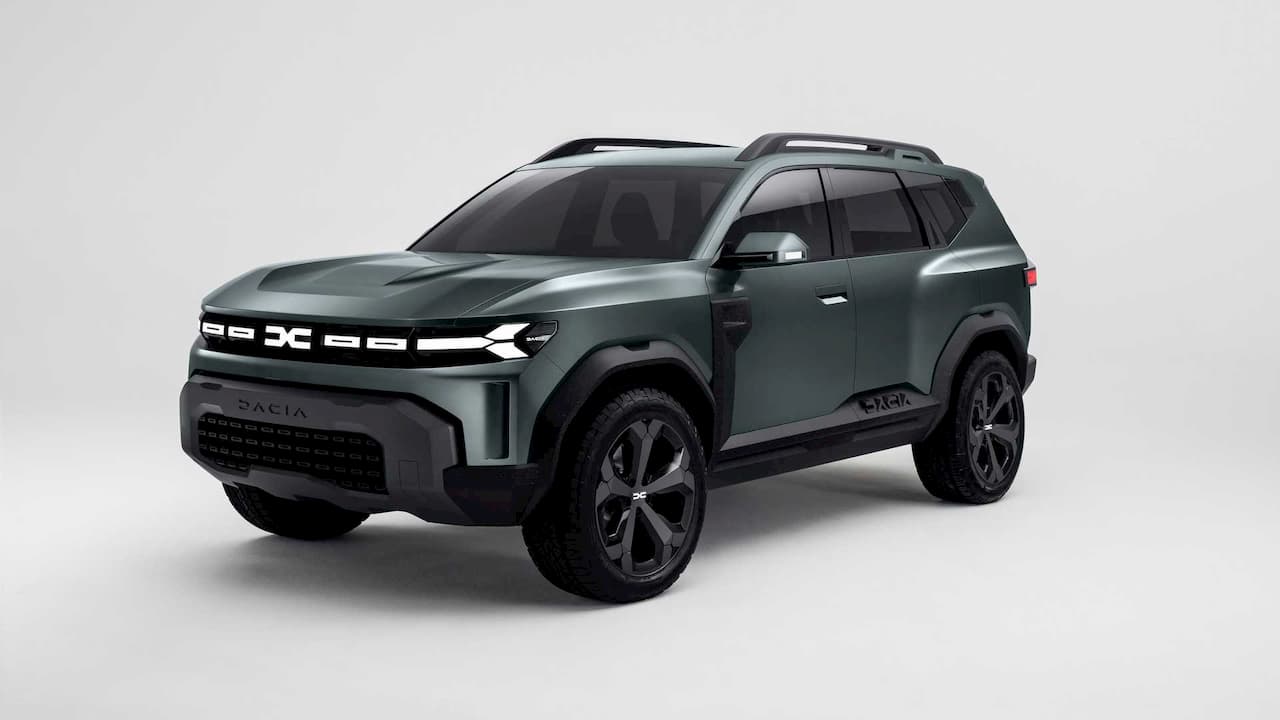 As part of the Renaulution strategy, group company Dacia unveiled a 5-year business plan in January 2021 which included the announcement of the Dacia Bigster concept – a C-segment SUV which will see the budget-conscious brand sell its most expensive product to date.

The next 4 years for the French group will see it focus on the Dacia-Lada business unit, with the brand announcing that the Alliance’s (Renault-Nissan-Mitsubishi) CMF-B platform will be fully leveraged for upcoming products. The CMF-B platform will also give these products the versatility of featuring alternative and hybrid engines, Dacia confirmed, while acknowledging future regulations will be met via this route.

The Dacia Bigster Concept is described by the company as being a ‘roomy, robust’ SUV meant for ‘open-air and dusty roads.’ Dacia confirms that the SUV measures 4.6 meters in length, which puts it in the ballpark of the world’s best-selling C-segment SUVs. However, given the brand’s heritage of adhering to a strict cost sheet, the production Dacia Bigster will be ‘accessible, at the cost of a vehicle from the segment below,’ the company had said in January 2021.

Dacia promises a ‘very spacious’ interior with generous outside dimensions and focuses on the design’s ‘genuineness.’ There are no chrome or imitation-aluminium trims, but the company has used raw recycled plastics for all exterior protective panels. We expect the main attraction from the interior to be an additional row of rear seats. Dacia may offer the Bigster in five- and seven-seat versions, although some markets may get the latter as standard.

Future Dacia models should look more stylish and less utilitarian. One reason is that Aston Martin design chief Miles Nurnberger has joined the Romanian brand as its director of design in September 2021. The man behind the DBX, the first Aston Martin SUV, is expected to lift Dacia to a new level of automotive design, starting with the Bigster and the third-gen Duster (codename: P1310) SUVs.

Denis le Vot, EVP and CEO, Dacia & Lada, has indicated that there will be significant differentiation between the Bigster and the next-gen Duster, as per a report from AutoExpert. The Duster will be a rough and tough SUV optionally available in a 4×4 version, le Vot said. The Bigster will be an SUV meant for long journeys, a model that focuses on comfort and touring, not off-roading.

Worldscoop forum member De_passage may have inside information of the next-gen Duster and the Bigster. De_passage says that the Bigster will be 213 mm longer than the all-new Duster. 45 mm of that extended length will come from a longer wheelbase. The front overhang of the SUVs will measure the same, but the Bigster will have a noticeably longer rear overhang. Much of the third-row space should come from the rear overhang, suggests the forum post.

Renault Group has suggested that thanks to the CMF-B platform, it is possible to offer the Bigster and other future Dacia models, like the next-gen Duster, for instance, with its E-Tech Hybrid powertrain technology.

Dacia (and) Lada are moving on the CMF-B platform for the next-gen Duster or the Bigster that we also announced. That is also to say that when Dacia or Lada will need technology, for example, for the E-Tech, the hybrid, we will be able to transfer the technology very easily to those ones.

Renault Group is working on a bigger version of the HR16 1.6-litre E-Tech engine, and it will offer the new electrified engine in the Dacia Bigster, as per a report from L’argus. Internally called ‘HR18,’ it will have a displacement of 1,800 cc. Unlike the HR16, the HR18 will run on the Atkinson cycle for low fuel consumption. The company didn’t use this combustion cycle in the smaller engine because it would have significantly reduced power, but that won’t be a problem with a higher displacement.

The 1.8-litre E-Tech engine will be available in self-charging hybrid and rechargeable/plug-in hybrid variants. The next-gen Dacia Duster will get it first, in fall 2024, and then the Dacia Bigster in 2025, L’Argus adds. The speculation is now strengthened, as in an interview with AutoExpert in October 2021, le Vot revealed that Dacia is considering a Bigster plug-in hybrid. Expect the traction battery pack of the plug-in hybrid system to offer an EV range of 30-35 miles (WLTP).

Given the Euro 7 norms (full compliance for Euro 7 is likely to come into effect by 2025), it is reasonable to expect even entry variants of the Dacia Bigster to feature MHEV (Mild Hybrid with a 48V system). According to Worldscoop forum member De_passage, Dacia could also offer the Bigster with a diesel engine.

Not a 5-star Euro NCAP model in the making

Dacia Jogger product manager Andreea Guinea has told Autocar that while Dacia is all for increasing passenger safety, it’s not chasing Euro NCAP stars. Securing a 5-star Euro NCAP rating means including advanced electronics, sensors, and cameras in the car, which can jack up the prices to where the brand loses what it stands for – affordability. The third-gen Sandero recorded a poor 2-star safety rating in the Euro NCAP crash test, and while the pricier Dacia Bigster could be safer, don’t expect a 5-star rating.

The Dacia Bigster should launch at an unbeatable price. The trump card for Dacia is the bargain starting price, case in point, the EUR 9,000 for a Sandero or EUR 12,500 for a Duster, will be utilized again to bring customers into showrooms, who invariably lock in the upper trims with better finish and more equipment.

The Dacia Bigster’s base price is estimated to come well below EUR 20,000. At the top of the range, decked out with a hybrid engine with at least 140 hp output, the Bigster would touch EUR 30,000. This would make it mouth-watering considering the Peugeot 5008, Volkswagen Tiguan Allspace, and the Nissan X-Trail cost that much for the basic trims. To a few, the Bigster could be a no-frills, budget alternative to the Land Rover Discovery Sport.

The Bigster would help Dacia significantly boost sales in the UK, where it reached the 200,000 sales milestone with the delivery of a Sandero Stepway in Milton Keynes in July 2021. The base Dacia Bigster could cost around GBP 20,000 (approx. EUR 24,000) in Britain, as per a report from Auto Express.

Dacia has not announced where it plans to manufacture the Bigster. The Mioveni factory in Romania that makes the Duster might not have the additional production capacity needed for producing the Bigster. The company could make it in Morocco, if capacity expansion is not given consideration in Romania.

Glen Sealey, MD, Renault Australia, has confirmed to carsguide.com.au that Australia will get the next-gen Duster and the Bigster. “I think those are for 2024 and 2025,” Sealey said. Whether the new SUVs will arrive with the familiar Renault lozenge or as Dacia products is something we’ll have to wait to know.

Expect a long gap between the launch of its first EV, the Dacia Spring, and the next Dacia EV. le Vot talked about Dacia’s electrification plans in the interview with AutoExpert cited earlier in this story. He said that the company will first adopt Renault Clio’s E-Tech hybrid system, then probably launch a Bigster plug-in hybrid, and “at some point between Euro 7 (emission norms, expected to kick in by 2025) and 2035, become fully electric.”

In 2035 we will put an electric motor in every Dacia assembled in Pitesti.

What is the Dacia Bigster release date?

The Bigster hybrid, riding on the CMF-B platform, should be available by early 2025.

Which SUVs would rival the Dacia Bigster hybrid?

The bargain-price Bigster would target C-segment SUVs including the Nissan Qashqai & VW Tiguan.

What is the expected Dacia Bigster price?

Dacia says the Bigster’s price will be similar to a lower segment model. Expect the decently spec’d Hybrid variant to come well below EUR 30,000.