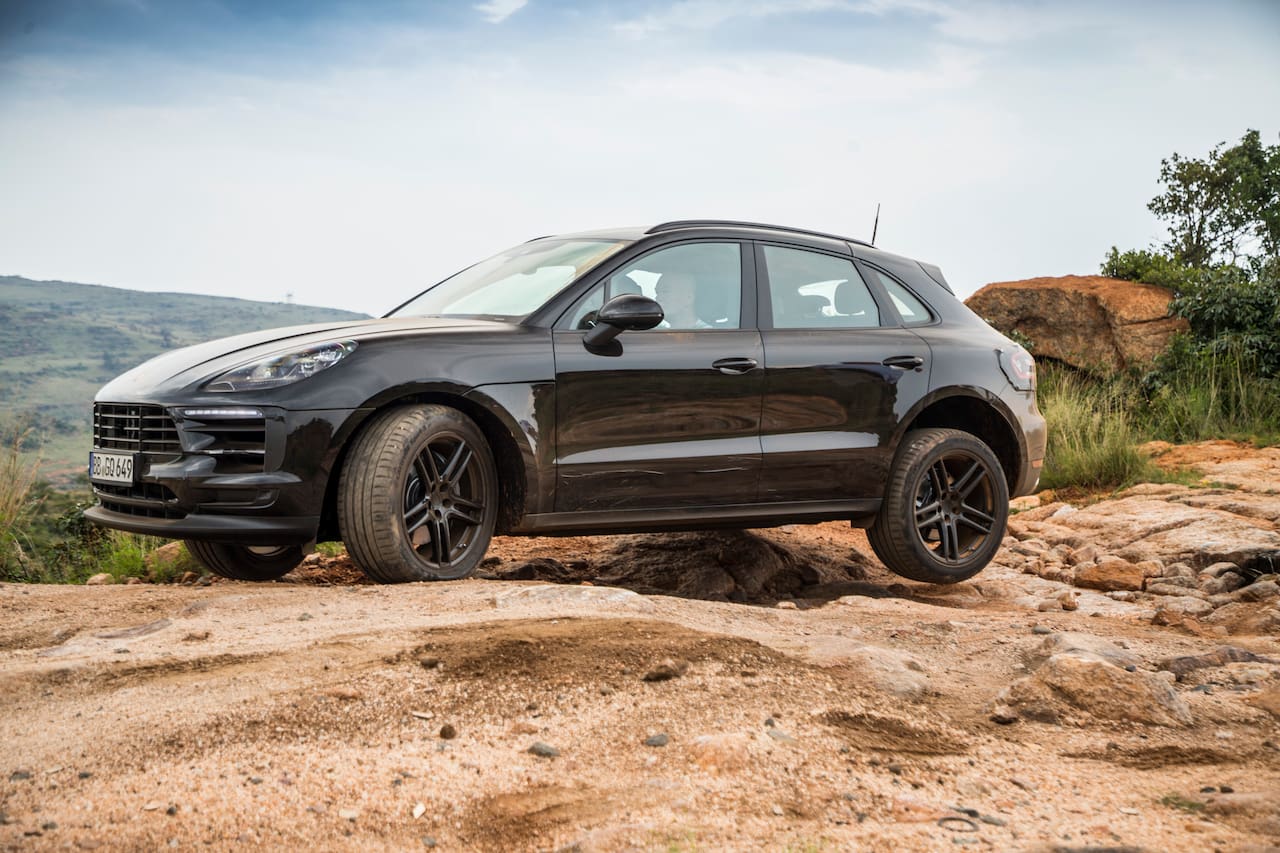 Here’s everything you need to know about the next Porsche electric car, the Porsche Macan Electric (working title), which would rival the Audi e-tron Sportback and the BMW iX, starting 2023.

Later in the story, find a section on the ICE-powered new Macan facelift.

The first Porsche Macan Electric prototype, seen in spy shots published on motor1.com, wears heavy camouflage and carries plenty of disguises to delude onlookers until it’s showtime. The silhouette cannot be masked, and so we have a fair idea of the body style and the overall shape of the upcoming Porsche electric car.

The first-gen Porsche Macan, which broke cover in 2013, is a modern-day SUV with a gently sloping roofline. While it will continue alongside the next-gen model until Porsche’s main markets are ready for full-scale EV adoption, the Porsche Macan electric will be an SUV-coupe with a hunchback. The SUV-coupe body style would help in optical differentiation and achieve better aerodynamics. In addition to a quickly downward-sloping roofline, expect an active spoiler edge on the trunk lid to improve the airflow for enhanced range.

As Porsche is designing the next-gen Macan as an EV from the outset, it is at liberty to make some principle changes to the design that can significantly improve aerodynamics and energy efficiency. For example, it can keep the nose lower. Julian Baumann, Director Sales and Marketing Product Line SUV, Porsche, has told Autocar that the body structure is different from the first-gen Macan and that the Taycan team is working on the aerodynamics.

Porsche is one of the few brands well-known for respecting its traditions. However, with the EV era calling for radical changes inside-out, it has acknowledged the need to break the rules in some aspects. Consider the adoption of a fully digital instrument cluster in the Porsche Taycan, for instance. Similarly, it may introduce a virtual mirror option, a feature that potential customers would expect to see on the ‘everyday’ alternative from the VW Group portfolio – the Audi e-tron Sportback. Sleek virtual mirrors can further reduce aerodynamic drag and add to the range in the race to catch Tesla. The Macan EV would have a rotary gear selector instead of a traditional gearshift lever.

The Porsche Macan Electric will feature an all-new infotainment system running on Google’s Android Automotive operating system. CARIAD, Volkswagen Group’s software arm, is developing a new vehicle software architecture based on the open-source version of Android Automotive OS. Using the license-free version means that, unlike Volvo Cars Group, the German conglomerate won’t include Google’s Play Store in the infotainment system. The company will offer a third-party app store instead.

In 2023, CARIAD will release the premium software stack 1.2 with launches of the electric Porsche Macan and the Audi Q6 e-tron. It will bring a completely new experience to Audi and Porsche vehicles. This platform will feature a new unified infotainment platform based on Android Automotive and the third-party app store, providing you of the access to your favorite entertainment and messaging apps. With 1.2, the first vehicles will be ready to migrate to the all-new Volkswagen Automotive Cloud.

The all-new infotainment system should be more advanced than Porsche’s ownPCM 6.0 unit. Wireless Apple CarPlay support, wired Android Auto support, natural language understanding for the Voice Pilot voice assistant, and OTA updates are the main new features of the PCM 6.0 infotainment system. Porsche says that the navigation system works faster and displays information more clearly. Moreover, the company has built Apple Music and Apple Podcasts into the PCM, which means more convenient access to more than 75 million songs ad-free and millions of free podcasts. In the future, it plans to offer adaptive sound function that adjusts to driving style. The E³ 1.2 software should take the experience a notch above.

At Porsche’s annual press conference held in March, Oliver Blume, the company’s CEO, had talked about the improvements planned for future electric cars. He suggested that future Porsche EVs will have more advanced battery packs that give a longer range and offer charging at even higher power than the current 350 kW (Taycan/Taycan Cross Turismo). He said:

For the pure e-vehicles, it (advancements in the future) will be about advanced batteries with high energy and power density in the future with quicker charging and longer ranges. The e-motors and power electronics will be even more powerful and efficient in the future. Porsche today is worldwide leading in quick-charging. We also see further development potential in this area.

In his presentation, Blume had said that the company would focus on what strengthens it and what differentiates it. “It is about five criteria(s): distinctive design, the Porsche-typical performance, and our high aspiration for quality,” the Porsche CEO said. “But also sporty traveling by quick-charging and the driver experience play an important role.” These characteristics would be amply clear on the incoming Porsche Macan Electric.

By the time the all-electric Macan is launched onto the market in 2023, it will have covered some three million test kilometers worldwide in varying conditions. The prototypes are able to incorporate the experience gained from countless previous test kilometers – driven in a virtual space.

Porsche, on May 10, on the all-electric Macan

The Porsche Macan Electric will debut the brand-new dedicated EV platform for luxury models called Premium Platform Electric (PPE) or PPE-Architektur in German. Porsche and Audi are jointly developing this platform, and at least two Audi models are planned on it, including the Macan’s technical cousin called the Audi Q6 e-tron and the Audi A6 e-tron.

PPE is developed exclusively for premium EVs. It is similar to MEB or Modularer E-Antriebs-Baukasten as they say in German, but it allows better outputs and new technologies and thus higher performance levels.

If there’s feedback Porsche has taken seriously from the Taycan customers, it’s the lack of confidence-inspiring range. Michael Steiner, the company’s Member of the Executive Board for Research and Development, has told journalists that the Macan Electric range will be “significantly more” than the Taycan range, as per a report from cnet.com.

The Porsche Macan Electric range will exceed the Porsche Taycan range, which is up to 484 km or 300.7 miles (WLTP), depending on the configuration. So, the targeted maximum figure could be around 550 km or 341.7 miles (WLTP). Steiner suggested that two battery pack options are likely to be offered, and at least the bigger unit is likely to be available in the USA and Canada. From Audi’s annual report for 2020, we know that Volkswagen Group targets a range of over 600 km (WLTP) with the PPE platform that will debut in the Porsche Macan Electric.

Citing Baumann, the report from Autocar mentioned above says that the battery pack of the Macan EV weighs 600 kg (1,323 lbs). The heavyweight of the battery pack can affect vehicle dynamics but provide the advantage of a low center of gravity.

One electric motor in the rear is standard in PPE models. As an option, it is possible to offer a second electric motor at the front axle (PSM or ASM), effectively unlocking an eAWD layout. The maximum system voltage is double that of MEB – 800 volts, enabling a significantly higher charging capacity of 350 kW.

Production of the Porsche Macan Electric will be held at the Porsche Leipzig plant in Germany. On September 14, 2020, Porsche announced that preparations to make this plant ready for manufacturing the next Porsche electric car have begun. The company will likely unveil the electric SUV in fall 2021.

Porsche has promised that it isn’t taking the gas-powered Macan off the market anytime soon. Full BEV adoption in the company’s main markets is a few years out, and until then, it will continue selling ICE vehicles.

Blume told autozeitung.de in October 2020 that the gas-powered Porsche Macan will get freshened to sell alongside the next-gen model. Terming the design of the EV “Emotional,” he added (translated from German):

We are significantly upgrading today’s Macan so that we can offer it for a while alongside the electric model. In a positive sense, our customers have a choice: they can drive the Macan as a combustion engine or fully electric.

Oliver Blume, CEO, Porsche on the business strategy of the Porsche Macan

Porsche launched the new Macan with performance upgrades, refreshed design, and improved interior on July 20, 2021. Visual changes include a new bumper, a new lower grille, and more black elements in the nose section (GTS) at the front. LED headlights with the Porsche Dynamic Light System (PDLS) are standard on the new model.

The overall interior layout of the Porsche Macan is still the same, but the floor console is new. Porsche designers have deleted most physical controls and replaced them with touch controls. The fewer switches give a cleaner, more elegant look, and a more upscale vibe. Also new is the gear selector, and it looks shorter and grippier. The analog clock at the top of the dashboard is standard equipment in the new Macan.

What is the Porsche Macan Electric release date?

The new electric Porsche Macan should debut next year and go on sale in the U.S. in 2023.

What are the Macan EV rivals?

The Porsche electric SUV will compete with the likes of the Tesla Model Y, BMW iX & Audi e-tron Sportback.

What will be the Porsche Macan EV price?

The Porsche Macan electric will likely cost around $80,000 onwards in the United States 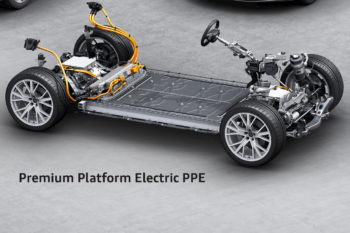 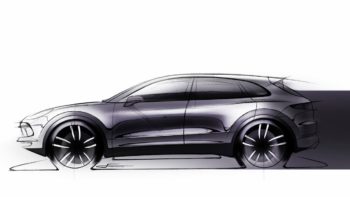 Porsche CEO Oliver Blume has hinted that the future Cayenne PHEV would offer a much higher EV range. Know that figure and other details here.