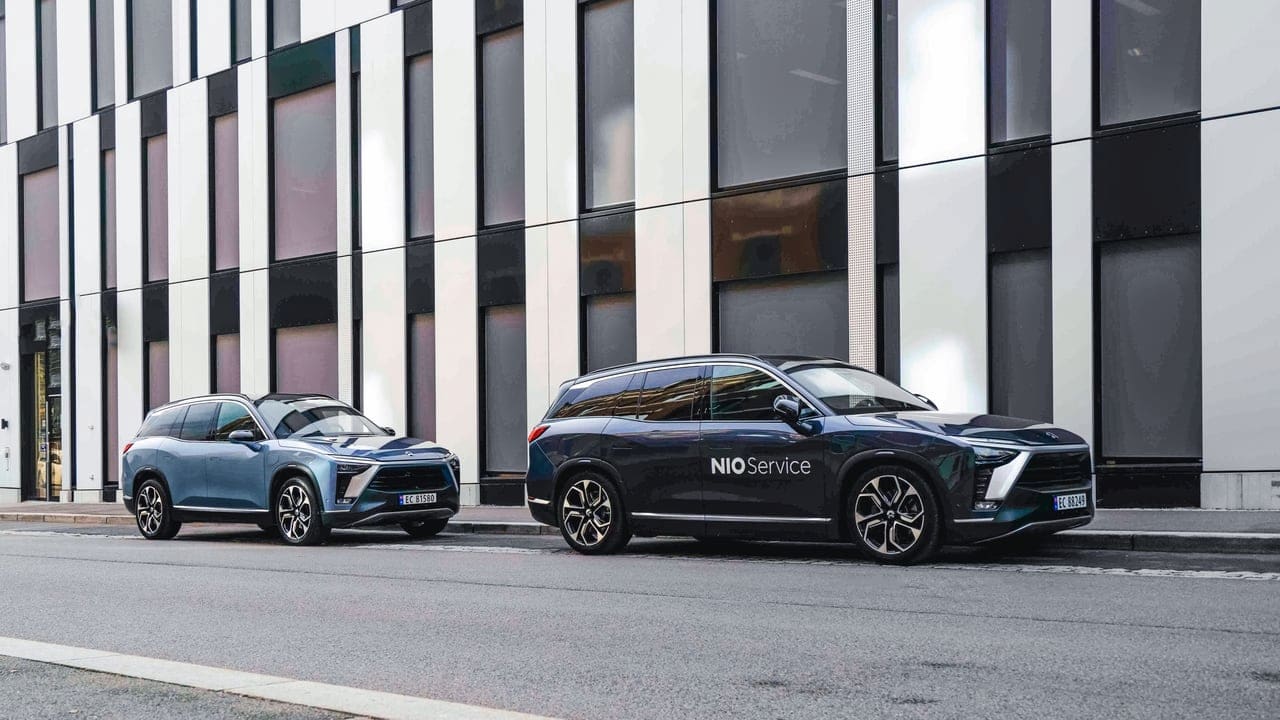 The much-awaited Nio Norway launch announced on 6 May 2021 finally happened on 30 September 2021. The Nio ES8 became the brand’s first model to go on sale in Norway. The Nordic nation is the Chinese automaker’s first export market worldwide, and it plans to expand to more European destinations gradually.

The Norwegian-spec ES8 employs two motors, one at the front and one at the rear, and these deliver 400 kW and 725 Nm of total torque. The best possible WLTP range of the ES8 is 375 km in the standard-range variant and 500 km in the long-range variant. Regardless of the battery pack option chosen, two seating layout options are available: 2+3+2 and 2+2+2.

Nio has opened its first showroom in Norway in Oslo. Located at Karl Johans Gate 33, the national capital’s nucleus of culture and commerce, it’s the largest user centre in Norway, spreading over an area of 2,100 square metres. That’s the place where Nio launched the ES8 in the country. It’s a two-story building having a display area for products and services on the first floor and the NIO Cafe, Library, Forum, Lab, Living Room, and Joy Camp areas on the ground floor. The latter is exclusive to Nio users.

Nio has brought its lifestyle brand Nio Life also to Norway. Together with two local artists, Anette Moi and Sandra Blikas, it has designed the Nio Norway collection for sale in Norway and even China.

In 2022, Nio will open four centres in Bergen, Stavanger, Trondheim, and Kristansand. The Chinese automaker aims for having a nationwide presence from 2022.

According to a report from CnEVPost, Nio has ramped up recruitment in Europe to gear up for the launch. The company has set up its European headquarters in Amsterdam, as per the report. William Bin Li, Founder, Chairman, and CEO, Nio, said during the company’s Q2 2021 earnings conference call that Nio Norway has a team of 40 employees.

Nio plans to connect Norway with five major highways and cities by the end of 2022. Hayler has told TopElectricSUV.com that the Nio Service and Delivery Center in Oslo (in Ensjø) will have a swap station.

By the end of 2021, our aim is to build four swap stations in and around the Oslo region to provide users in the Oslo region with an experience where you worry as little as possible about the range. With the swap stations, you can easily travel to your cabin on the weekends without charging. During 2022, our plan is to bring swap station to Bergen, Stavanger, Trondheim, and Kristiansand. But let me assure you that Nio Power swap stations will also be placed on other locations in Norway.

Nio was going to open its first delivery and centre in Norway in Oslo in October 2021. The company had said that this facility would have a floor space of 1,800 square metres, and that it will offer a pick-up and delivery service in Oslo and four more cities. The company has already built up its own professional service team to provide a premium service experience to Nio customers. It will provide a mobile service for the ultimate convenience of maintenance and repairs.

In 2021, our plan is to cover five main cities through our own Nio Service Center and authorized service centers, and in 2022, our network will expand to more cities across Norway.

Nio models to be priced higher than Audi cars in Europe

Qin Linhong, Director and President, Nio, told the Chinese publication at Auto Shanghai 2021 (April 2021) that the company has begun establishing an after-sale service centre and a data centre in Europe. Qin also said that Nio cars would cost higher than Audi cars in Europe.

Qin indicated that a Nio US launch might happen in the mid-to-long-term future. “US car verification standards are different from those of Europe or China, so we need to redevelop our car models to enter the US, which we have no energy to do now as a start-up, but we will do it later,” Qin said.

Nio Norway launch a crucial step in the global expansion

Though a small country, Norway is a crucial destination for automakers because of its policies. It is seeking to ban ICE vehicles by 2025. Norsk elbilforening (Norwegian Electric Vehicle Association) has said that EVs accounted for 50% of car sales in 2020. No other country in the world has created such a record, and the share is poised only to go up further.

Nio has four models in its Chinese portfolio. The Nio ES8, a Tesla Model X rival, is the flagship SUV. Below it is the Nio ES6, a Tesla Model Y opponent, and this model has a coupe version as well – Nio EC6. The newly launched Nio ET7 goes up against the Tesla Model S. On 18 May 2021, Nio built the first validation prototype of the ET7.

Nio to ramp up production

To meet the growing demand when exports begin, Nio has planned to ramp up production, say reports from China. The company has struck a deal with JAC and Jianglai for joint manufacturing of Nio vehicles and related fee arrangements. JAC already produces the ES8, ES6, and EC6, at the JAC-NIO factory in Hefei, China. Jianglai is a JAC-Nio joint venture company for operation management in which Nio holds a 49% stake.

From May 2021 to May 2024, JAC will continue manufacturing the ES8, ES6, and EC6 and also build the Nio ET7 and other Nio models yet to be sold. JAC will increase annual production capacity to 240,000 units. Jianglai will be responsible for parts assembly and operation management.

Another CnEVPost report has said that Nio plans to sell 50,000 units of the ET7 in 2022, which will be the first year of sales for the new model. This annual sales target, including the European allocation, converts to an average monthly sales target of 4,167 units. If the company can achieve it, the ET7 could take away the best-selling Nio model title from the ES6.

In related updates, Nio is likely to build a new plant next to the JAC-Nio plant, according to yet another cnEVpost report, which cites a tender document as the source of this information.

Nio sold 10,628 vehicles in September 2021, marking a remarkable 125.7% year-over-year growth. A month later, in October 2021, the sales dropped 65.5% to just 3,667 units. Compared to October 2020, that was a decline of 27.5%. Restructuring and upgrades of production lines and the preparation of new launches from 28 September to 15 October, as well as some supply chain issues, impacted the production that month.

The company completed deliveries of the first batch of ES8 in Norway on the launch day. It doesn’t expect big volume sales this year in the country this year. The company initially focuses on brand-building by ensuring high customer satisfaction and a good sales and service network. The company has set up a Nio Norway User Advisory Board together with its prospective customers.

Some 700-800 people signed up for the Nio Norway User Advisory Board, nearly four times that of the company’s expectation. The preliminary feedback is that the Norwegians are excited about the company battery swapping stations and the BaaS business model.

Regarding the delivery in Norway, we believe for this year, the contribution is not going to be that significant because our priority is to make sure we can ensure high user satisfaction in the Norway market by building our brand, expanding our sales and service network.

While Nio doesn’t expect the sales in Norway to be as good as in China initially, it is observing another statistic there that is better than in its home market. During Nio’s Q3 2021 earnings conference call, Bin Li said that one-fourth or 25% of those who take a test drive are placing an order. “This shows to me that basically, the efficiency is much higher compared with that of here in China,” Bin Li added.

Speaking further, Bin Li said that there is a lot of order backlog, and while deliveries in November 2021 should show an improvement (over the first two months), Nio would like to control the pace of delivery in the initial phase because of its internal targets, especially on the user satisfaction rate.

On 25 July 2021, Nio announced that it had chosen Suzhou city, located in the Jiangsu province, to host Nio Day 2021. With this, Nio said in a statement, “The event has entered the preparatory and implementation stage with immediate effect.”

Nio Day is an annual event that takes place in China. Excitement levels are on par with Tesla’s Battery Day, as it is a highly anticipated event among electric car enthusiasts. Because of the COVID-19 pandemic, Nio had to push Nio Day 2020 to January of this year. Nio Day 2020 saw the launch of the company’s flagship sedan, the ET7, along with the announcement of its Power Swap Station 2.0 and 150 kWh solid-state battery. These developments are related to Nio’s operations in Europe as the company plans to expand in the region by offering its newest technologies and products.

On 18 October 2021, Nio announced that it would hold the Nio Day 2021 at the Suzhou Olympic Sports Centre on 18 December 2021. The company could launch the ET7 and introduce the rumoured Nio ET5 at this event. 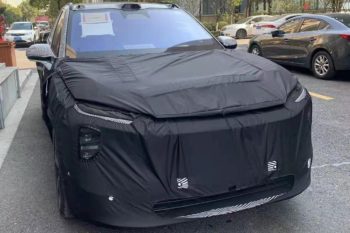 The new Nio SUV could slot below the ES8. 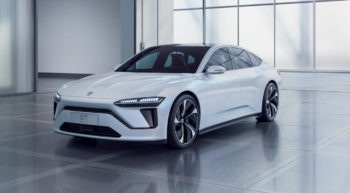