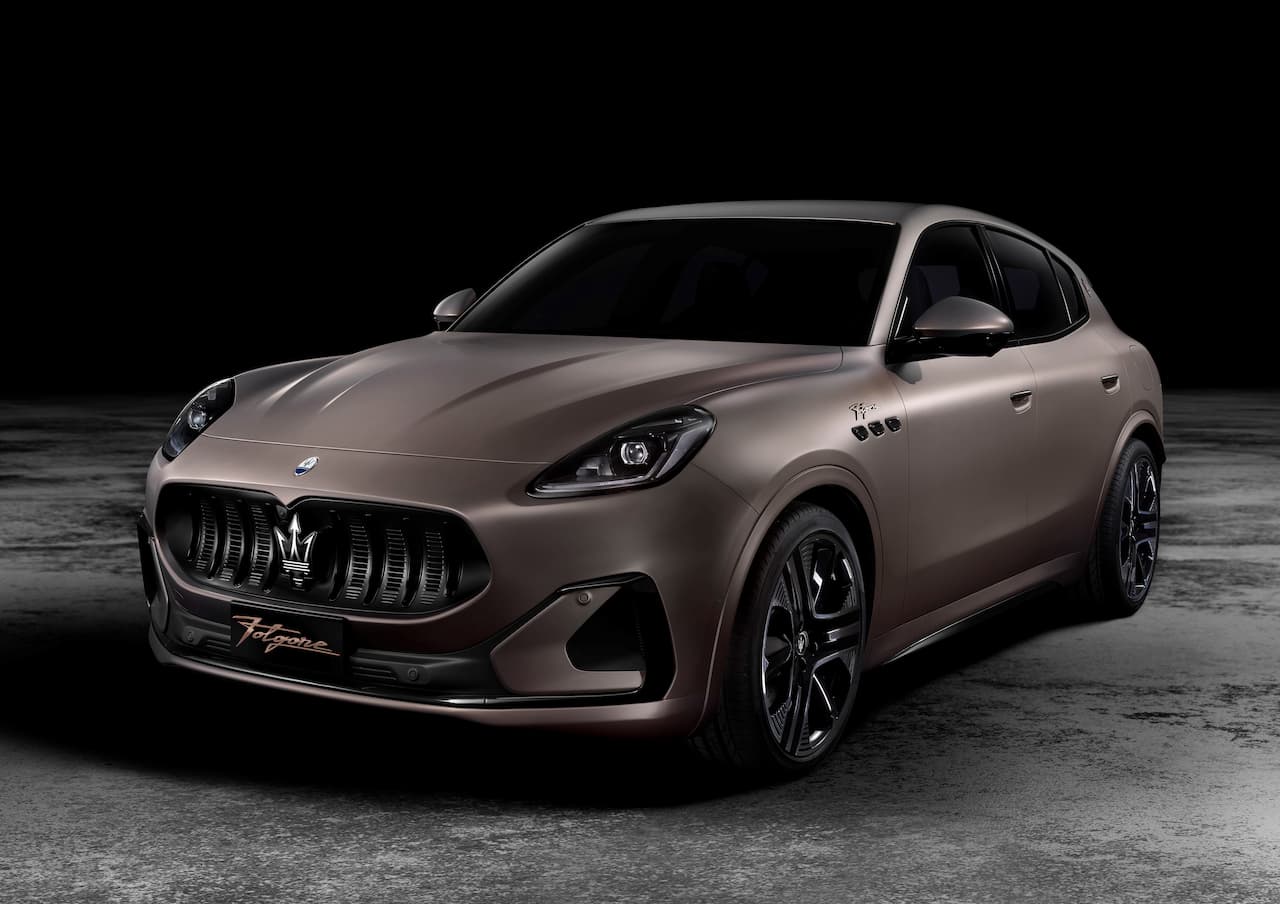 After months of getting photographed by the car paparazzi, wraps finally came off the Maserati Grecale in March 2022. Four versions have been revealed: three ICE-powered ones (two are MHEVs among those) and one pure electric model christened the Maserati Grecale Folgore. The Modena-based brand recently announced that all-electric models would wear the Folgore moniker, which means ‘lightning’ in Italian.

The Grecale is a luxury midsize SUV like the Alfa Romeo Stelvio and the Porsche Macan. Thanks to the iconic Maserati Trident on the low and imposing grille, trapezoidal C-pillar, and the MC20-like LED headlamps, it is instantly recognizable as a Maserati. At the rear, the new electric SUV sports Giugiaro 3200 GT-inspired boomerang tail lights and a steeply raked windscreen.

Special touches in the electric version

In an interview with Autocar, Maserati design chief Klaus Busse said that Folgore electric vehicles will make use of the same basic underpinnings, and hence designers are working with something that’s 90% clear or already done. The design approach for Folgore EVs is thus simple, requiring the design team to focus on just three aspects: cooling, aerodynamics, and communication (e.g., color and badges).

While the gasoline-powered Grecale sports a convex upper grille with vertical slats in the center, the Grecale Folgore looks slightly different due to a unique grille design, which features curved vertical slats.

The front bumper design is unique as well. While it features a lower air dam and two air inlets on the sides as in other versions, a distinct gloss black surround sets the EV apart. The Maserati Grecale Folgore is also equipped with 20-inch aero wheels. At the rear, the Grecale gets boomerang-shaped tail lamps which draw inspiration from the Giugiaro 3200 GT. The Trident appears again at the rear between the C-pillar and the edges of the windscreen.

Maserati has a new color for the Grecale EV called Rame Folgore. The copper-shade paint was developed using iridescent pigments to make the EV distinguish itself from the gasoline variants.

Busse suggested to Autocar that Maserati will be a brand for purists and performance enthusiasts even in the electric era. The company wants customers to experience the car, and not be distracted by mega-screens. As automobile companies adopt digitalization on a large scale, with huge central displays, coast-to-coast displays, and rear ultra-wide entertainment screens, Maserati doesn’t wish to overdo it. None of the Folgore EVs may feature a portrait-style touchscreen like Tesla, Nio, and Mercedes-Benz EVs. There’s no place for “unnecessary graphics” that could distract the driver, he said.

Maserati hasn’t showcased the interior of the Grecale Electric, but it’s likely to be identical to the ICE-powered versions. The quality of materials used appears exquisite, and there’s premium stitching all around, including the seats and the dashboard. The flat-bottomed steering looks beautiful; it houses two rotary dials and capacitive touch buttons for other functions. The left dial can switch ignition on/off, while the right dial toggles between drive modes.

There are five screens on the inside; a digital cockpit is positioned behind the steering, and there are twin central screens measuring 12.3-inches and 8.8-inches housed into a single panel. The fourth screen is the tiny digital clock. The larger screen functions as the infotainment, while the lower screen can control the lighting, seat heating/ventilation, ride-height control, and climate control among other functions. There’s also Bluetooth, Android Auto, and Apple CarPlay on offer as part of the Maserati Intelligent Assistant (MIA).

The Grecale is available with a heads-up display that, according to Maserati, is one of the units with the best brightness, contrast, and viewing angles.

The sleek chrome embellished gear selector buttons are a unique touch. Music lovers are in for a treat because the Maserati Grecale comes with a Sonus sound system with 21 speakers, which deliver 1200 W of output.

The Grecale offers a new voice recognition system with natural voice functionality. Users don’t need to press a button to start the system; they can give it commands simply by starting the sentence with “Hey Maserati.”

Previously, there were speculations of the electric Grecale biding its time to adopt one of Stellantis’ STLA range of platforms. However, it is now evident that it will manage with the existing Giorgio architecture.

The Grecale is available with an air suspension that allows six levels of adjustments for changing the height up to 65 mm. The driver can reduce the height by 35 mm or increase it by 30 mm. In Parking Mode, the SUV lowers down to make the exit easier for the driver and passengers. The Grecale Folgore could get this feature as standard.

Only limited official details about the Maserati Grecale Folgore powertrain are available. The power and torque outputs are 500+ hp and 590 lb-ft (800 Nm), however, there’s no word on how many electric motors will power the EV. It’s possible that the SUV will come with two motors, one on each axle. Maserati has also revealed a top speed of over 200 kmph (124 mph), and a 105 kWh battery with a 400-volt technology for the electric SUV. A higher 800-volt system would have allowed faster charging, but we must remember that Grecale’s architecture is a tweaked version of the existing Giorgio platform, which is why there are some limitations.

Federico De Medio, Maserati’s head of vehicle validation, has told Autoblog that the Grecale Folgore could deliver a range of 300+ miles. However, we don’t know whether these targeted specs apply to the Euro-spec or the U.S.-Spec Grecale Folgore (the WLTP metric followed in Europe is generous compared to EPA estimates). Maserati will try to partially make up for the heavier weight (from the battery pack) with the usage of lightweight materials like carbon fiber and aluminum.

The ICE-powered GT and Modena versions use a 2-liter turbo-gasoline engine with a 48-volt mild-hybrid system that comprises a Belt Starter Generator (BSG), an electric supercharger called ‘eBooster,’ an additional battery, and a DC/DC convertor. The BSG functions as an alternator that recuperates energy during braking/deceleration and charges the additional battery. The charge saved in the auxiliary battery powers the eBooster. The system operates such that the eBooster is always available via the secondary battery or the BSG.

The BSG and eBooster help balance fuel usage and performance when driving normally. During heavy-footed or spirited driving, they provide an extra boost when the engine maxes out (reaches its peak rpm). This engine produces 300 hp in the GT variant and 330 hp on the Modena. 332 lb-ft (450 Nm) torque output is identical for both variants. An 8-speed automatic transmission sends drive to the wheels.

Maserati’s official communication states that the gas-powered Grecale will go on sale in the second half of 2022. The company will launch the electric version one year after the gasoline model. According to a report from CNET, the Grecale Folgore launch is programmed for the fall of 2023.

Made in Cassino, Italy, the Grecale should be sold in the U.S. a few months after Europe. It will compete with the Porsche Macan, which starts at around USD 55,000. Next year, the electric Maserati Grecale should compete with the Porsche Macan EV, Mercedes EQE SUV, and the Audi Q6 e-tron. The company has put more than 250 development models on test in the U.S., Japan, the UAE, China, Finland, and Italy, to ensure the vehicles delivered to customers are reliable.

In June 2022, the Maserati Grecale SUV will travel across 14 states in the United States and make 40 stops, allowing potential customers and fans to take a closer look at the new Italian offering. The Grecale Roadshow includes the following states: Texas, Virginia, New York, Massachusetts, Pennsylvania, Newark, New Jersey, Arizona, California, Florida, Connecticut, Georgia, Illinois, and Maryland. However, the Grecale Folgore will not be a part of the roadshow. Only the ICE-powered versions will tour America this year.

Maserati will launch a bevy of electric cars in the next few years as part of its Folgore full-electric strategy with the long-term goal of becoming an EV-only brand. The company plans to offer all its models in a pure electric variant by 2025. By 2030, it will stop selling all the ICE models and have only EVs in its vehicle line-up.

Maserati will begin its EV offensive with not one but three unveils in 2023: GranTurismo Folgore, Grecale Folgore, and GranCabrio Folgore. By 2025, the MC20 EV, Quattroporte Folgore, and Levante Folgore will join the Maserati EV range.

Maserati is opting for cost rationalization, given that the Giorgio platform cost USD 1 billion in development. For Maserati, the electric versions of the GranTurismo, GranCabrio and the Grecale will spearhead its zero-emissions journey. These will be the first Maserati electric car models based on the converted platform, whereas the cars to follow are likely to switch to the STLA Large architecture, a bespoke platform developed for upper-class electric vehicles from Stellantis.

What is the Maserati Grecale Folgore release date?

The Maserati Grecale Folgore will reportedly go on sale in fall 2023. U.S. deliveries should begin around this time.

What will be the Maserati Grecale Folgore price?

The Maserati Grecale Folgore could cost around USD 65,000 in the U.S. market.

Which models will be Maserati Grecale Folgore rivals?

The Maserati Grecale Folgore will rival the likes of Porsche Macan EV and the Audi Q6 e-tron. 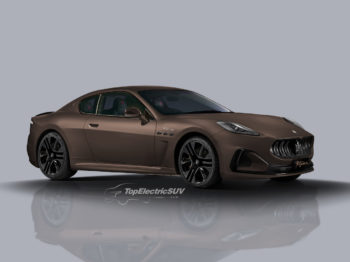 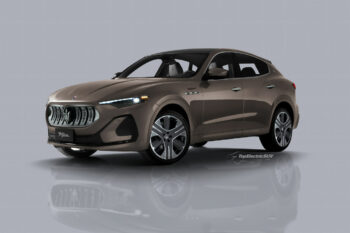