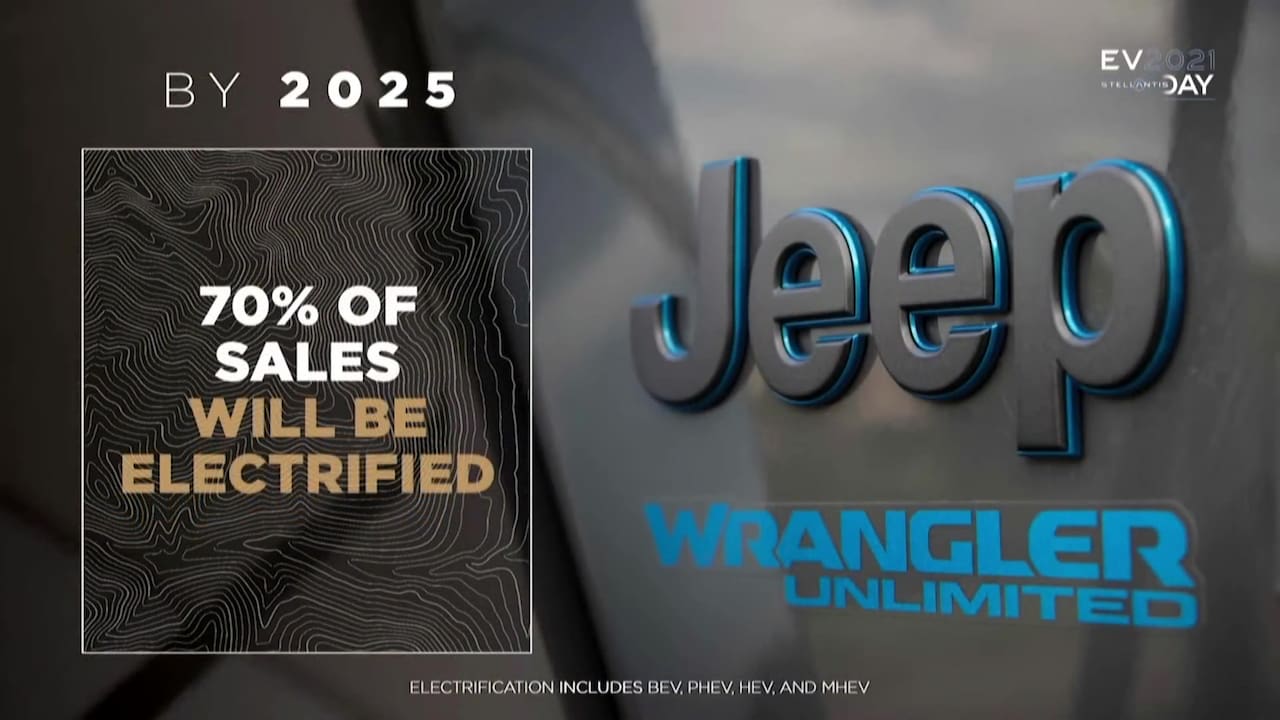 The first Jeep 4xe (four-by-e) model in the United States, the Wrangler 4xe, was launched in 2021 and quickly became a sales success. The Wrangler 4xe is the best-selling PHEV in the marketplace and looks to sustain this momentum, with CEO Christian Meunier stating that Jeep will have a full EV in every SUV segment by 2025.

You can pick up the Wrangler 4xe today in the USA, with prices starting at USD 53,995. The Wrangler 4xe is sold in three trims: Sahara, Rubicon, and High Altitude. However, all variants are powered by a 2.0-liter turbocharged I-4 gasoline engine assisted by two electric motors getting their juice from a 400V 17.3 kWh lithium-ion battery pack located under the second row of seats. Combined system output stands at 280 kW (375 hp) and 637 Nm (470 lb.-ft.) of torque, and an 8-speed AT is standard. The Wrangler 4xe delivers a company-est. EV range of 21 miles (34 km).

The Jeep Grand Cherokee 4xe is available in five trims, with prices starting at USD 58,860 for the entry-level 4xe trim. The powertrain is identical to the Wrangler 4xe and the company-est. pure electric range is 25 miles (40 km).

The towing capacity is rated at 6,000 pounds (2,720 kg). It will be interesting to see how the Jeep 4xe Grand Cherokee fares in sales since there is nearly a USD 20,000 price difference between the base Grand Cherokee and entry-level 4xe (however, the 4xe also adds a lot of standard equipment for that price bump).

We are fully committed towards a vision of zero emission future, and by 2025 we will be offering a zero-emission fully electric Jeep 4xe in every SUV segment.

The Jeep Renegade is already available as a PHEV in the European market, and hence the transition will see a full-electric Renegade in the next generation. Jeep has revealed a model called Jeep Avenger, which is smaller than the Renegade and rides on Stellantis Group’s eCMP platform. Renegade EV would slot above the Avenger, and unlike that smaller model, will likely be available in the U.S.

Jeep engineers can opt for the eCMP for the Renegade Electric or use the upcoming STLA Small platform, although choosing the latter would delay the launch to 2026.

Like the Renegade, the Jeep Compass is already available as a PHEV in Europe, and by 2025, we should get the Compass Electric. For the Compass EV, there is no doubt that Jeep will use the STLA Medium architecture, which can accommodate battery packs between 87 kWh and 104 kWh. Multiple range variants will ensure the Compass EV can be taken on Jeep’s trails or a camping trip without too much range anxiety.

The Jeep Recon is a Wrangler-inspired model designed especially for off-roading adventures purely on electric power. Capable of crossing the mighty Rubicon Trail and making a return on a single charge, the new Jeep off-roader will probably go against the future Rivian R2S and Ford Bronco EV. Jeep will offer the Recon with the Jeep Selec-Terrain traction management system, electronically locking axles, a one-touch powertop, removable doors and glass, the latest generation Uconnect infotainment system, and much more.

Jeep has confirmed that it will manufacture the Recon in North America, and we expect it to ensure that the model meets all the other requirements of the Clean Vehicle Credit program for a competitive price. The Recon will have its public debut in 2023 and become available to reserve in the U.S. the same year. It won’t go on sale before 2024, though.

The Jeep Wagoneer S (codename) is the company’s flagship electric SUV designed for customers who want a zero-emissions SUV that’s classy and comfort-focused instead of the old-school and off-road-focused Recon. Though it shares its name with the gas-powered Wagoneer twins, it’s not a full-size model. The mid-size electric SUV should also compete with the Range Rover Sport Electric that’s due in 2024.

Jeep will fit a 600 hp electric powertrain in the Wagoneer S, enabling it to accelerate from 0 to 60 mph in just around 3.5 seconds. The company is targeting a range of 400 miles for its biggest electric SUV. The battery-electric Wagoneer will make its public debut in 2023 and become available to reserve in the U.S. at the start of the same year. Jeep will build it at a North American factory from 2024.

The Jeep Grand Wagoneer 4xe will be a plug-in hybrid model competing with the Range Rover P440e. Announcing the model during the Jeep 4xe day 2022 event, which took place on September 8, 2022, Jim Morrison, the head of the brand in North America, revealed that the Grand Wagoneer PHEV will have an estimated combined range of over 500 miles. With the battery pack fully charged and the gas tank full, customers will be able to drive from NYC to Toronto non-stop.

Morrison talked about the brand’s future launches with Motor Authority on the sidelines of the New York International Auto Show in April 2022. Among a number of potential models, a Jeep Gladiator 4xe was discussed. Morrison didn’t give a definite answer when asked if a Gladiator plug-in hybrid is in the works but did mention Jeep’s goal of electrifying all models by 2025. Motor Authority believes a Gladiator 4xe could arrive as an MY2024 vehicle.

How the Jeep 4xe works

Taking the example of the new Grand Cherokee 4xe, which uses the same powertrain as the Wrangler 4xe, here’s how Jeep has engineered its first plug-in hybrid setup.

The 2.0-liter I-4 gasoline engine uses a twin-scroll low-inertia turbocharger mounted directly to the cylinder head. An electric power steering and an electrically driven air conditioning compressor are used to remove these loads from the engine.

Instead of the conventional alternator, a high-voltage, liquid-cooled motor generator unit is used and connected to the engine crankshaft pulley via a belt. The role of this motor-generator is to spin the engine during start-stop operations and generate electricity for the battery pack. Instead of a torque convertor, the Jeep 4xe system uses a larger high-voltage motor-generator mounted on the TorqueFlite eight-speed automatic transmission. Two clutches manage power and torque from the e-motor and engine.

The 4xe system on the Wrangler and Grand Cherokee employs a 400-volt, 17 kWh battery. On the Grand Cherokee, the battery units and controls are mounted underneath the vehicle, packaged under the floor, and protected by a series of skid plates. To keep the battery at its optimum temperature, the battery pack system includes a dedicated heating and cooling circuit, which uses the Grand Cherokee’s air conditioning refrigerant to function.

Also mounted underneath the body is an Integrated Dual Charging Module (ICDM) that combines a battery charger and a DC/DC converter in a single, compact unit and a Power Inverter Module. Jeep says all high-voltage electronics are sealed and waterproof, which is how the Trail Rated Grand Cherokee 4xe achieves water fording up to 24 inches (61 cm).

To facilitate nose-in parking at charging locations, the charge port is located on the left front fender as a push open/close cover. It includes LED indicators of charging status, whereas an LED battery level monitor sits atop the instrument panel to easily check the battery state during charging.

The Jeep 4xe system also gets 4xe E Selec modes which the driver can use to optimize the hybrid setup. The driver can toggle between Hybrid (the engine and e-motor are optimized for fuel efficiency), Electric (operates as an EV until the battery reaches minimum charge, or if more power is desired, at which point, the engine is engaged again), and eSave (prioritizes the engine and saves the battery charge for later use).

The Jeep 4xe system incorporates regenerative braking, and when 4×4 is engaged, all wheels feed torque for regen braking. A driver-selectable Max regen mode results in a more “assertive” braking calibration and naturally slows the Grand Cherokee quicker than normal regen.

The Jeep 4xe Grand Cherokee has a 6,000 lb (2,720 kg) towing capacity, and the Trailhawk 4xe variant has gone through the Rubicon Trail with just all-electric power. 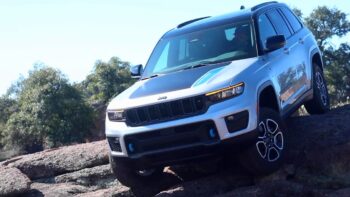 The 2023 Grand Cherokee has replaced the original model launched in 2021. 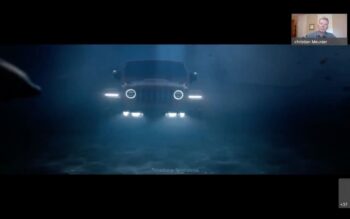 Jeep’s ultimate off-roader will always be be Wrangler, even in the electric era.