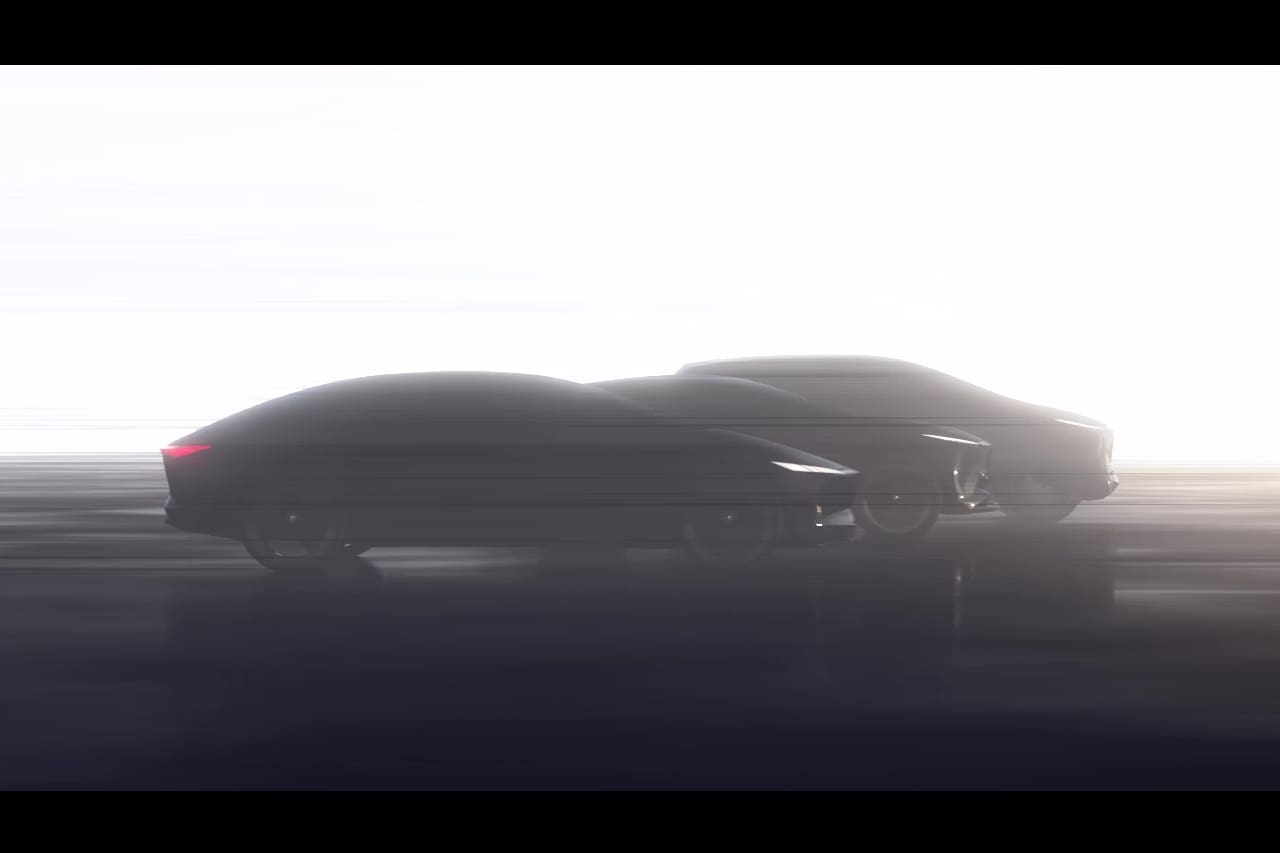 Update: ‘Design,’ ‘On the Infiniti electric sedan,’ and ‘Infiniti sales in 2021‘ sections updated.

With every established automaker sharing their vision for complete zero-emission carlines, Nissan’s luxury arm, Infiniti, isn’t about to get left behind. On November 30, 2021, it announced that by the end of the decade, most of its vehicles would have electrification. In a brief video of the announcement, three new Infiniti electric car models, including two Infiniti electric SUVs and a sedan, were teased.

The video first is a glimpse of what likely is the brand’s new EV design language. Infiniti strongly hints at full-width light strips at the front and rear, a design cue that has become a cliche of modern EVs, especially design concepts. At the end of the video, three futuristic Infiniti EV concepts drive off into the sunset, a sleek sedan, an SUV-coupe, and the SUV.

The electric SUV-coupe and SUV feature full-width headlights and tail lights. The tail lights with arrow segments that enlarge toward the outer ends are reminiscent of the Audi e-tron GT. The SUV-coupe sits noticeably low and appears to have a roofline that falls dynamically from the B-pillar. It is more athletic, perhaps designed to appeal to the style-conscious.

The SUV has a relatively boxier, conventional silhouette that focuses on space and practicality. Its higher ground clearance and possibly longer wheelbase will allow a large battery pack that provides more range and all-road ability. However, the SUV-coupe could make up for its smaller dimensions with better aerodynamic efficiency and lower weight. Dealers say that this model will be an Infiniti QX60 alternative, as per a report Automotive News published on June 26, 2022.

Today, we announce that not only will most of the vehicles we sell by 2030 be electrified, but also that those vehicles will embody our unique take on modern Japanese luxury.

The Infiniti SUV-coupe could be a technical cousin of the production Nissan Chill-Out concept. In contrast, the Infiniti SUV could be connected to the Ariya.

On the Infiniti electric sedan

At Nissan’s corporate announcement in Canton, USA, on February 17, 2022, the brand confirmed the first all-electric Infiniti sedan for 2025. As part of a USD 500 million project to transform Nissan’s Canton facility in Mississippi into an EV manufacturing hub, one Nissan and one Infiniti sedan will be produced at this facility in 2025. The video teased the Infiniti electric car, showcasing some design details.

The Infiniti electric sedan has intricately designed LED lighting, a coupe-like roofline that flows down to merge into a subtle rear spoiler, and muscular hips. It gets full-width LED light bars at the front and the rear, both lighting up in an animated fashion.

According to the Automotive News report mentioned earlier in the story, the first Infiniti electric sedan due in 2025 will be a replacement for the Infiniti Q50. The compact sedan, which uses the Nissan Skyline branding in Japan, measures 189.6 inches in length, 71.8 inches in width, and 56.8 inches in height. It has a 112.2-inch-long wheelbase and its drag coefficient is 0.26 Cd. Expect the upcoming electric sedan to establish its design language for its range of EVs.

While the length may not change, the Infiniti Q50 electric successor can have a longer wheelbase and a more aerodynamic design, thanks to dedicated electric vehicle platform. In a previous report published on March 12, 2022, Automotive News claimed that dealers had already seen the model.

One new model will combine the latest technology with the unique proportions to deliver a thrilling new take on the EVs at Nissan, while the new Infiniti presents a sleek electrified interpretation of the brand’s human-centered approach to modern Japanese luxury.

It was always clear that the first Infiniti electric cars would ride on the CMF-EV platform of the Renault-Nissan-Mitsubishi Alliance. Not to be confused with the CMF-BEV platform for the B-segment, the CMF-EV platform is useable for C- and D-segment models and currently underpins the Nissan Ariya and the Renault Megane E-Tech Electric, and will support the successor of the Nissan Leaf, offering all-wheel drive capability.

At the Alliance digital conference held on January 27, 2022, Nissan confirmed that the CMF-EV platform would spawn the Infiniti electric car models. Makoto Uchida, President and CEO of Nissan, said that this platform would be the basis for EVs from five different brands, including Infiniti.

I’m excited to share that across the Alliance, more than 15 models will be based on the CMF-EV platform by 2030. That means this platform will be the basis for nearly half of our 35 EV models. By utilizing this platform across five brands – Renault, Alpine, Nissan, Infiniti, and Mitsubishi – in their respective core, we expect to see up to 1.5 million cars per year produced on this platform by end of the decade.

Infiniti’s zero-emission SUVs may come with the best and the most innovative features in the brand’s whole line-up. On the outside, key elements should include an illuminated brand logo (front), all-LED lights, sequential turn signals, and 20-inch or larger wheels. Digital climate control panel with capacitive haptic switches, flat, open floor without a transmission tunnel, adjustable center console (front), fully digital instrument cluster, etc., should be among the interior highlights.

The Infiniti electric SUVs should feature ProPILOT for hands-free, autonomous driving. Nissan has said that it wants to equip over 2.5 million Nissan and Infiniti vehicles by FY2026 with this technology. By FY2030, it aims to have virtually every new model available with a LiDAR sensor that could significantly improve ProPILOT and expand its list of functions.

The Infiniti electric cars models should be available in all-wheel drive variants that make use of two motors, one for the front wheels and one for the rear wheels. Nissan has a unique branding name for the twin-motor all-wheel-control technology – e-4ORCE. The number “4” stands for the all-wheel control driving capability.

Infiniti sales in the U.S.

In addition to increasing Infiniti’s sales, the electric models should enhance its brand image in the coming years. In an interview with Gear Patrol published in May 2021, Peyman Kargar, CEO of Infiniti, had said that he wants to push the brand further upmarket. Combined, Nissan and Infiniti will have 23 electrified vehicles on sale by 2030, of which 15 will be fully electric.