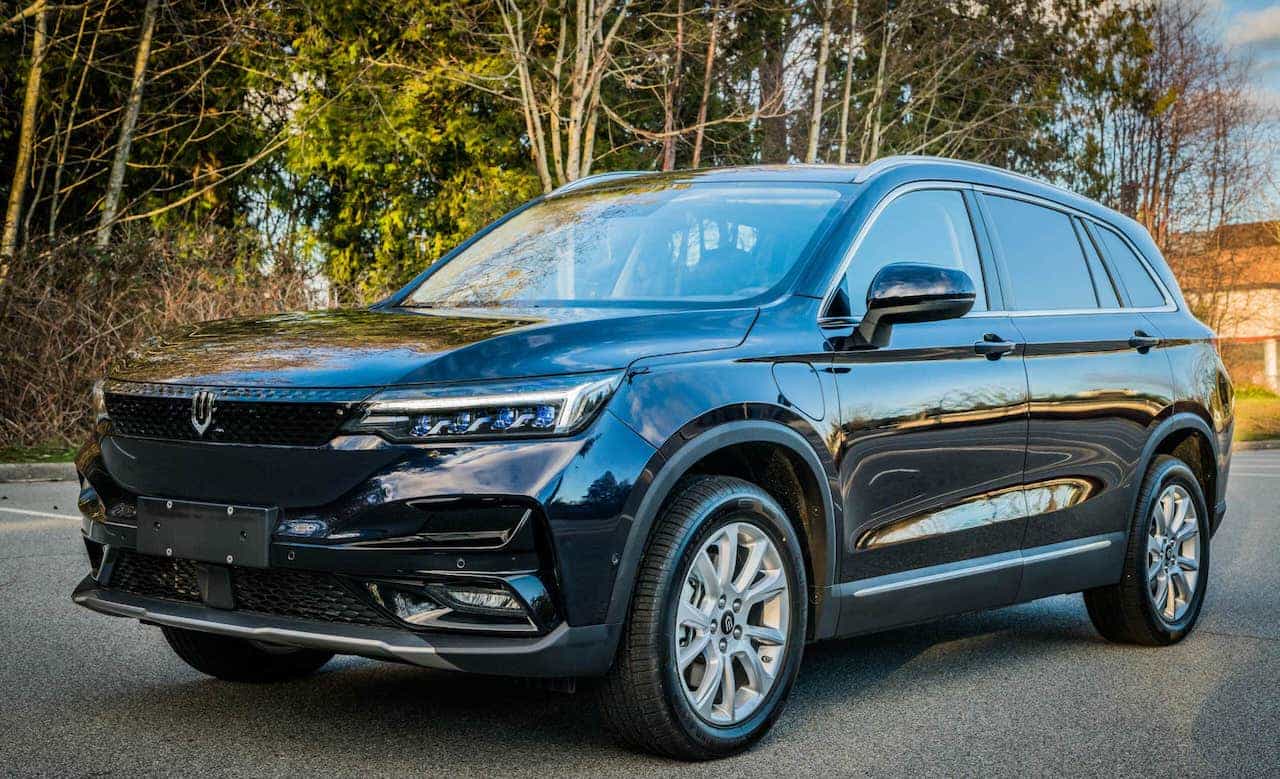 America’s first Chinese electric car will be an electric SUV from Jiangsu Kaiwo Automobile’s Skyworth brand, called Skyworth EV6 (formerly the Skyworth ET5, ‘Skywell’ ET5 and Imperium ET5). Imperium Motor Company will market it in the states as the Imperium SEV. The vehicle doesn’t come with the Chinese alphanumeric branding, as EV6 is used by Kia in the United States.

Skyworth is a consumer electronics brand, but since 2019, the Chinese concern is making EVs as well. Imperium Motor Company is the electric vehicle division of DSG Global, a company based in Canada that is already distributing other Chinese electric vehicles across the Americas.

The Imperium SEV is 184 inches long, 75.2 inches wide, and 67 inches tall, with a wheelbase of 110 inches. The SEV is available in two variants, one with a 55 kWh battery pack and one with a 72 kWh battery pack. Imperium estimates the battery packs to deliver a range of 410 km (255 miles) and 520 km (323 miles), respectively, as per NEDC. The EPA-est. figures will likely be much lower than these estimates.

The SEV Premium adds front fog lights, cruise control, heated front seats, N95 air filter, panoramic sunroof, and front and rear parking sensors. It features more automatic LED headlights instead of the basic LED headlights, plus a 12.3-inch LED touchscreen infotainment system instead of the 8-inch central display. Another upgrade in the Premium grade of the SEV is the 72 kWh battery pack.

Imperium is accepting reservations for the SEV with a small deposit of USD 100. Below are the prices of the company’s first electric SUV:

The Imperium SEV should go on sale in the U.S. in the second half of this year.

The Imperium SEV is available in Canada with the same features and specifications. However, Imperium doesn’t offer the SEV in the Limited grade in the country. Interested customers can make a reservation by putting down a deposit of CAD 100. Below are the prices of the SEV in Canada:

In an announcement in Canada on December 21, 2021, Imperium said that it will launch the SEV as an MY2023 product. It expects production to begin in Q2 2022. The company said that it had received bookings and deposits for 650 SEVs.

According to a report The Globe And Mail published on December 30, 2021, Imperium will offer the SEV in a special Launch Edition for a price of CAD 44,995. The company has received reservations for approximately 750 units in Canada, and it plans to begin deliveries by June 2022, as per this report.

Canadian publication Driving has reviewed a pre-production unit in the top-end variant. It found some influence of European and Japanese models in its exterior and interior design, but didn’t feel that it was striking enough. Chinese customers call for good interior space, particularly in the rear, and since Imperium designed the SEV with their preference, the roominess left Driving very impressed. The rear seats would be comfortable for even NBA athletes, Driving’s review suggested! The quality of materials inside the cabin also impressed the Canadian reviewers, and so did the large boot and sunroof.

As for performance, while the SEV is obviously not the quickest or fastest SUV on the market, it feels powerful with just one passenger. With family and cargo, though, Driving feels that power might be an issue. The flat-bottom steering with meaty grips was surprisingly firm as you would in a Sport mode setting, which means those who love driving won’t complain when behind the wheel, and the SEV performed well in the handling and braking departments, during Driving’s brief test drive.

AutoTrader Canada’s had a similar experience when it drove a SEV prototype. While the front-mounted motor gives a surprisingly good straight-line performance and the quick acceleration customers expect from an EV, it’s not blisteringly quick like a Tesla.

The prototype couldn’t manage the torque well on heavy throttle from a standstill, incurring significant wheelspin. Of course, flooring the pedal while at 0 mph is not how budget EV customers would evaluate the car. However, the traction control didn’t perform well either. On snow-covered roads, instead of directing drive to the wheel with more traction, it chose to cut power almost completely. The experience could be better in the North American SEV with different tires and a market-specific calibration of components.

For an idea of how competitively Skyworth has priced the SEV, Volkswagen’s ID.4, which is smaller, costs CNY 199,888 or USD 31,415 (incl. subsidies) onwards. Only time will tell if the ultra-low prices convince customers to put down a deposit for this relatively unknown brand.

Imperium is relocating its headquarters to the Silicon Valley region of California, parent company DSG Global announced on March 21, 2022. It’s a 100,000 sq. ft. site in Milpitas, just one exit down from Tesla’s Fremont plant.

Chinese media report that Skyworth plans to sell 30,000 vehicles this year, and this figure includes overseas markets. Another target the company has set for 2022 is the completion of the development of a high-end model codenamed Skyworth CE11.

Skyworth has introduced a new plug-in hybrid SUV that looks similar in shape and size to the Imperium SEV in China – the Skyworth HT-i. According to a report from CnEVPost, the hybrid SUV is the first model to pack BYD’s DM-i hybrid system outside the BYD family. Under the hood is a 1.5-liter engine that boasts the highest thermal efficiency in the world – 43.04%. It produces 81 kW of maximum power and 135 Nm of peak torque. The battery pack, which could be a BYD Blade unit, provides a triple-digit pure electric range of 200 km (124 miles). Reservations for the HT-i are now open in China.