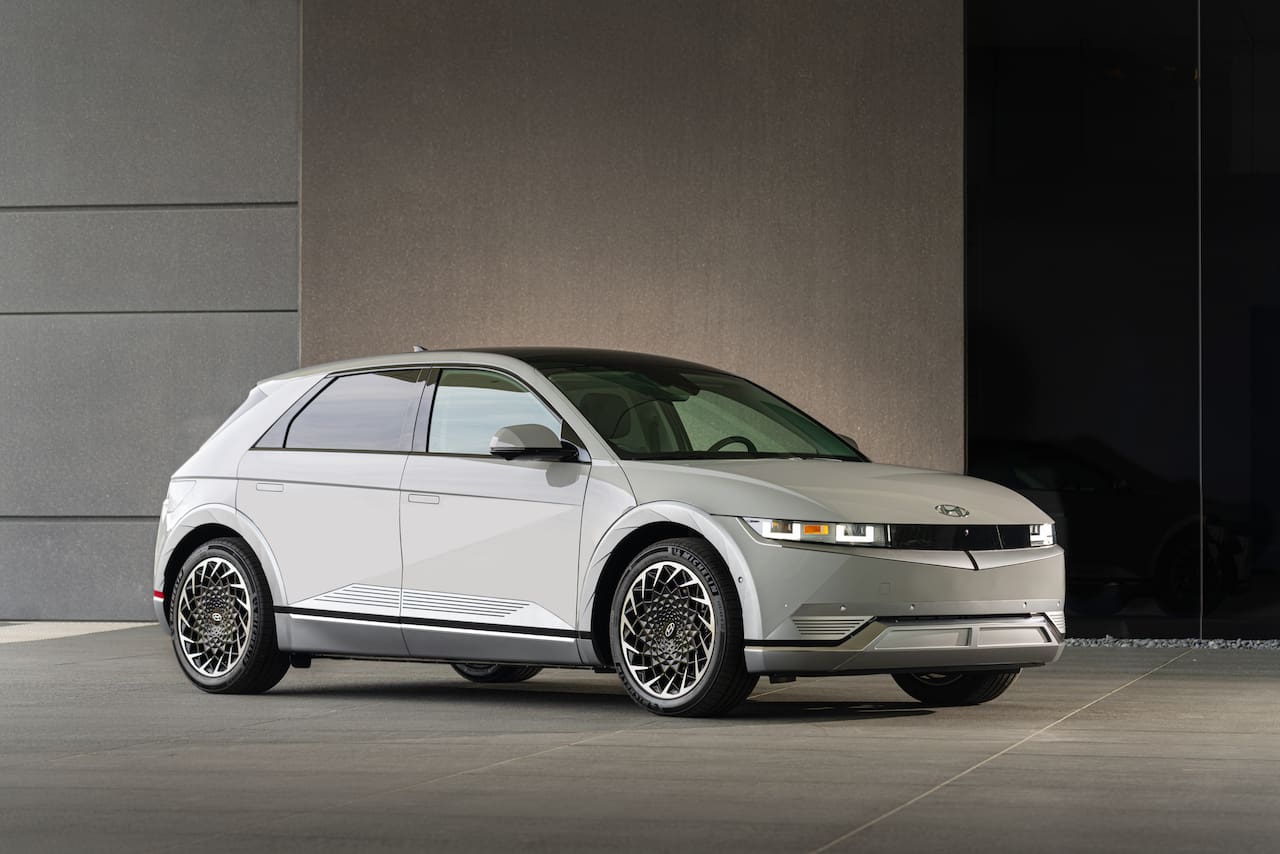 Following the local reveal last month, Hyundai Motor Group has confirmed that the Hyundai Ioniq 5 deliveries in the U.S. will begin this fall. The company will soon begin pre-orders with a refundable deposit of USD 100. The Canadian launch is also planned this fall, and there, pre-orders open this month.

The US-bound Hyundai Ioniq 5 is the symbol of a new era for Hyundai Motor Group, as it is the group company’s first electric car developed from the ground up. This story is a deep dive into the Hyundai Ioniq 5 and the sections in the second half of the story track its journey to showrooms.

The Hyundai Ioniq 5’s funky yet hi-tech design truly speaks the future is here. The neo-retro EV takes cues from the Hyundai Pony classic car and has been designed around the new “timeless” design philosophy. Clamshell hood, Parametric Pixel lights, the diamond-shaped greenhouse, clean and sharp lines, and super-sized wheels are some of the exterior design highlights.

The low-profile, minimalist, and futuristic design continues inside. The Hyundai Ioniq 5 interior incorporates the ‘Living Space’ theme. The dashboard and center console occupy visibly less space than similar ICE-powered traditional crossovers. Many elements are made from eco-friendly, sustainably sourced materials, such as plant-based (bio PET) yarns and natural wool yarns, recycled PET bottles, bio paint with plant extracts, and eco-processed leather with plant-based extracts. The large windows and panoramic sunroof, along with the available light-tone upholstery, ensure that the driver and passengers get a lot of natural light and feel fresh.

Inside, the Hyundai Ioniq 5 has features like a dual-cockpit comprising a 12-inch virtual instrument cluster and a 12-inch touchscreen infotainment system, an Augmented Reality Head-Up Display (AR HUD), and a Universal Island moveable console (140-mm/5.5-inch rear-sliding floor console). The infotainment system of the Ioniq 5 integrates a new design theme not seen on any Hyundai model so far.

The Hyundai Ioniq 5 is the brand’s first EV to offer a Vehicle-to-Load (V2L) function that allows charging other EVs and using high-power electric equipment using the energy stored in the battery pack. Globally, up to 3.6 kW of power can be supplied using this function, enough to power home appliances and electronic devices during camping or power-cuts, or charge another EV stuck at a remote place with an empty battery pack. In the U.S. market, however, the V2L function can supply up to 1.9 kW of power.

Like Tesla EVs, it is possible to plug and charge the Hyundai Ioniq 5. When the charger is connected, the authentication and payment take place automatically, and the charging starts.

There are three Hyundai Ioniq 5 trims in the U.S., namely SE, SEL, and Limited. Below are the key features:

Globally, the towing capacity of the Hyundai Ioniq 5 is 1,600 kg (680 pounds), which is better than that of even the top-end Hyundai Santa Fe. In the U.S. market, though, the official towing capacity is a higher 1,500 pounds.

531 liters (18.8 cu. ft.) of cargo space is available behind rear seats, and on folding the second-row seats, 1,591 liters (56.2 ct. ft.) of cargo space becomes available. There’s a front trunk or frunk as well, and the US-spec version offers 24 liters (0.8 cu. ft.) of storage space regardless of the drivetrain layout. In contrast, in the global version, the same measurement is 57 liters (2.0 cu. ft.) for the 2WD configurations and 24 liters (0.8 cu. ft.) for the AWD configurations.

The Hyundai Ioniq 5 is the first model built on Hyundai Motor Group’s E-GMP platform. The E-GMP platform can support both 400-volt and 800-volt charging infrastructures. No additional components are required to use either of the charging infrastructures. The higher-voltage charging capability is standard, and with a 350 kW charger, it takes just 18 minutes to charge the Hyundai Ioniq 5 from 10% to 80%. Drivers can achieve a 68 miles range with only five minutes of charging.

As stated in the beginning of the story, the US-spec Hyundai Ioniq 5 gets a 77.4 kWh battery pack as standard. An AWD drivetrain layout is optional. In the U.S., Hyundai expects a range of 300 miles (EPA) with the bigger battery pack, which could be the same unit available in the Kia EV6 worldwide.

SK Innovation is the supplier of batteries of the Hyundai Ioniq 5. The company says that the Ioniq 5 uses the NCM8-type Lithium-ion batteries, which have approximately 80% Nickel content. 80% is the highest level of Nickel content in the Lithium Nickel Manganese Cobalt Oxide batteries the auto industry is using presently. In addition, SK Innovation has developed NCM9-type Lithium-ion batteries as well, and it plans to supply them to Ford for the F-150 Lightning from 2022.

Earlier last month, the South Korean automaker announced its electrification plans for the U.S. market. The company said that it plans to start manufacturing Kia and Hyundai electric cars in America. It will invest a whopping USD 7.4 billion in the United States by 2025 to manufacture future EVs, improve production facilities, and further its investments in smart mobility solutions. Localized production in the U.S. will begin with a Hyundai EV in 2022, and this model could be the Ioniq 6 or Ioniq 5.

For the moment, the Ioniq 5 would be imported from the South Korean plant where production began in March.

In April, a report on autonews.com said that dealer training and facility plans for the Hyundai Ioniq sub-brand (that starts with the Hyundai Ioniq 5) in the United States are being rolled out now (Spring). Hyundai National Dealer Council Chairman and Alexandria Hyundai (Virginia) President/Owner Kevin Reilly, who spoke to AutoNews, expects the Ioniq 5 and other upcoming Ioniq EV models to appeal to a “wider audience” in the U.S. market.

Nearly two months after the world debut of the Ioniq 5 on February 23, Hyundai, in its Q1 2021 investor presentation on April 22, outlined the plan to launch the electric crossover in the United States in the second half of 2021. As stated in the beginning of the story, deliveries in the USA are scheduled to commence this fall. There’s no word on the MSRP yet.

Ioniq 5 subscription in the U.S.

A subscription ownership model has been planned for the U.S. to target even those aspiring EV prospects who demand more convenient ownership, cannot afford an outright purchase, and/or aren’t risk-taking. At the U.S. debut of the Hyundai Ioniq 5, Jose Munoz, President & CEO, Hyundai Motor North America, said:

We are also looking at alternative ownership models to attract and engage first-time EV customers. Our research tells us many people are interested in trying EVs but want to do so in a convenient, low-risk way. We call them EV mobility pioneers. They are young city dwellers who are already comfortable using subscriptions to buy goods and services. We will offer a simple automobile subscription service for those Ioniq intenders that would feature a single all-inclusive monthly payment covering the vehicle insurance and maintenance.

The subscription service will provide customers a convenient and low-risk way of owning a Hyundai Ioniq 5. Customers will need to make only one monthly payment that includes all the costs and covers the vehicle, insurance, and maintenance. A report from Automotive News says that the subscription period will range from one month to three months. The try-and-buy concept should be particularly effective in drawing the interest of the fence-sitters in switching from an ICE vehicle to an EV.

With the tenure options restricted to just a few months, the subscription plans aren’t aimed at creating a permanent alternative ownership model for the Ioniq 5. The intention here is to generate customer interest by offering a trial period.

In the U.S., people not owning or subscribing to the Hyundai Ioniq 5 will have another way to experience it, via Lyft. In late 2020, Motional and Lyft partnered to deploy the world’s largest robotaxi network. In March 2021, Motional announced plans to use the Hyundai Ioniq 5 for its robotaxis. Lyft riders will be able to book and experience the fully autonomous taxi from 2023.

Testing of the robotaxis is underway. In fact, when Hyundai Motor Group Chairman Euisun Chung visited the U.S. this month, he took a test ride in one of Motional’s modified Ioniq 5, a Korea JoongAng Daily report said. Motional is a joint venture between the South Korean conglomerate and technology solutions company Aptiv.

58 kWh battery & digital mirror not offered in the United States

In South Korea, Hyundai offers camera-based virtual mirrors, which improve aerodynamics, provide a clear view of the rear, and reduce blind spots. The Ioniq 5 is the first Hyundai model to feature digital side mirrors, the feed of which is displayed on dedicated screens located on the corners of the dashboard. This feature is not available in the U.S. market, though, and depending on government regulations, the feature would be unlocked in the global market.

Deliveries of the first customer vehicles in the European region will begin in the second quarter of 2021, Hyundai has announced.

Given the overwhelming demand for the Ioniq 5 in South Korea and Europe, it was reported in the Korean press that Hyundai had decided to increase the EV’s global production target for this year from 70,000 units to 90,000 units. A report from edaily.co.kr dated March 8 said Hyundai was yet to discuss the increase in targeted production with the labor union. Production of 70,000 units requires overtime work for about four days every month.

The significant increase in production would require more overtime work, not to mention a steady stream of component supplies. An insider has said that Hyundai has enough battery supply to meet the higher annual production target of 90,000 units. However, the shortage of semiconductors could affect the execution of the new plan. “We are reviewing the availability of batteries and related parts from various angles to increase production,” a Hyundai official commented. “We are also watching the supply and demand of semiconductors,” the company source added.

In Europe, Hyundai has received more than 10,000 pre-orders for the Ioniq 5, the company announced on March 3. With customers required to deposit €1,000 for reservation, Hyundai says that these pre-orders imply an actual purchase intention. More than 236,000 inquiries about the new electric crossover have been made in the Old Continent.

Ioniq 5 was able to get an explosive response from customers in one day because it responded to customers’ demands and expectations for Hyundai Motor’s first dedicated electric vehicle that will provide a whole new experience with innovative design and advanced technology.

Hyundai Motor Group leverages Electrify America and Ionity EV charging networks in US and European markets, respectively. In South Korea, it is building an in-house charging network under the new E-pit brand. Like Tesla Superchargers, E-pit chargers offer the plug & charge function. In addition, they are sheltered in a futuristic charging station made of a canopy structure featuring a minimalist design.

The Hyundai Kona EV has put customers in danger because of quality issues. Fires caused by faulty batteries and the massive related recall last year affected Hyundai’s reputation, particularly in South Korea. In addition, the recently unveiled Ioniq 5 has an issue of the coolant leaking out, as per a report from Chosun Biz, which Hyundai is aware of.

To avoid new fiascos, HMG has set up a new Electrification Quality Division, which will work on strengthening quality control. Jinan Choi, previously in charge of the Powertrain Quality Division, is the Executive Vice President of the new division, the Korean media reports.

What is the Hyundai Ioniq 5 U.S. release date?

What will be the Hyundai Ioniq 5 price?

The base Ioniq 5 should start around USD 40,000 in the United States.

Which models would the Ioniq 5 compete with? 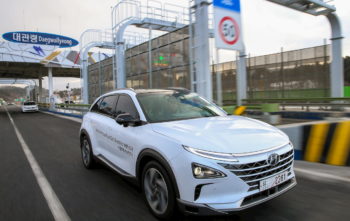 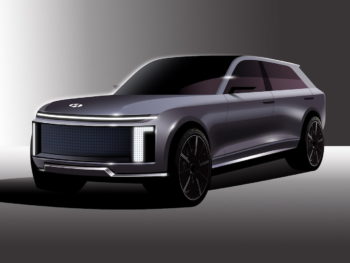 Update: Another top-level Hyundai official has hinted at an electrified variant of the Santa Cruz. New details added to the story.