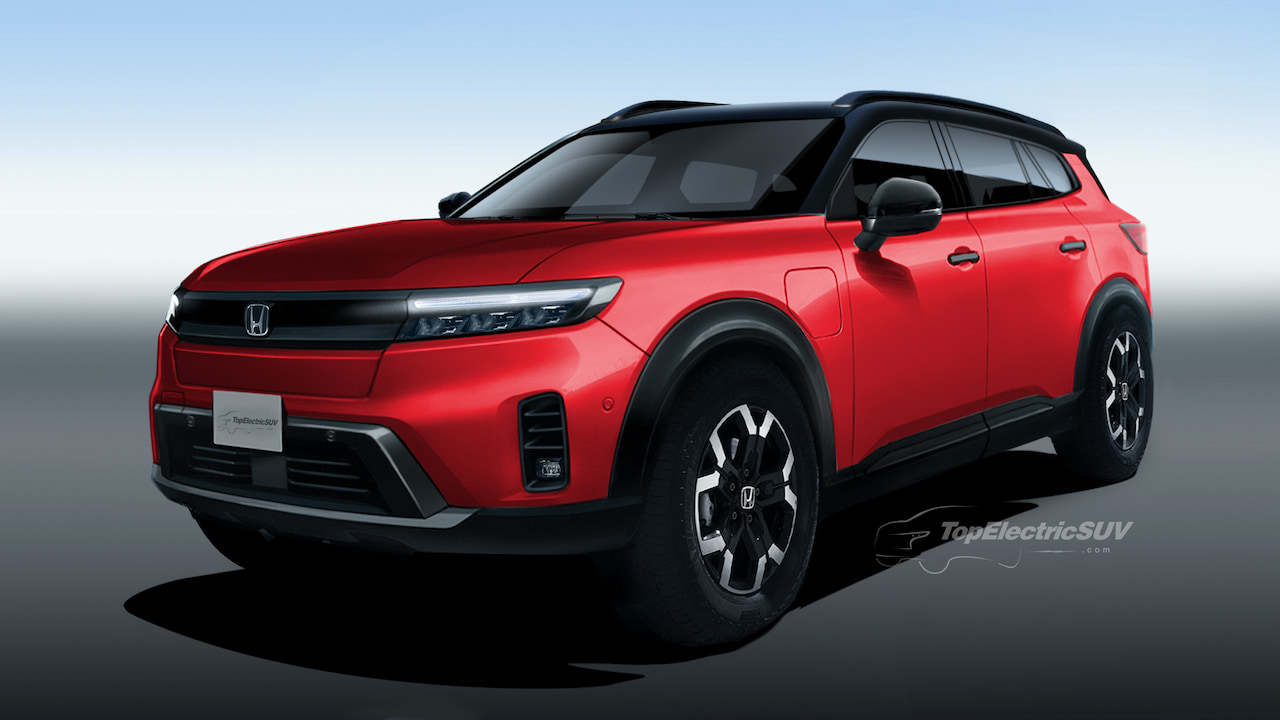 The Honda Prologue EV will mark the beginning of a new era at Honda, especially in the U.S. and Canada, for which it has already announced some specific information. Here are nine things you need to know about the new Honda electric car:

Honda says its American and Japanese design studios created the Prologue in a collaborative effort. The Prologue is the brand’s first model designed mainly through VR technology. The development of the new Honda electric car is also based in Japan.

On May 18, 2022, the company released the first sketch of the vehicle that should feel comfortable at any Honda dealership. The Honda Prologue features a crossover-SUV design that looks almost like a regular gas-powered model, without unusual proportions observed in bespoke electric vehicles such as the Tesla Model Y and the VW ID.4. However, it will be more aerodynamic with smooth surfaces, a visibly raked windshield, low and sloping roofline, slim mirrors, and a closed upper grille.

Honda is going for a slightly technical look to reflect the futuristic nature of the powertrain, as visible in the narrow headlights and the cubical front fog lights, a departure from the CR-V and Pilot. An upright face, a strong shoulder line, and chunky alloy wheels exude power and strength, projecting the EV’s masculinity. The charging port is on the front-left fender, similar to the upcoming Chevy Blazer Electric. Mainstream automakers are using flush door handles for aerodynamic and styling benefits, but Honda will employ the convenient traditional handles on the Prologue.

Our exclusive rendering is a preview of the production version of the electric SUV. Compared to the sketch, we feel that Honda would tweak the headlamps with a greater focus on function than visual drama, use smaller wheels, change the door mirrors, and increase the body height to improve the headroom and the cargo space. The model in the sketch sure appears to have a more athletic stance, but our rendering previews a design that has more practical dimensions.

The Honda Prologue SUV will be American technology underneath a Japanese shell or top hat. In April 2020, Honda and General Motors agreed to develop two EVs for Honda. The co-developed EVs will ride on GM’s third-generation global EV platform and Ultium batteries.

The third-generation global EV platform and Ultium batteries can deliver EVs with outstanding capabilities, which the GMC Hummer EV and GMC Hummer EV SUV demonstrate. We’re talking about battery packs with up to 800 V voltage and 200 kWh battery energy content, up to 350 kW fast charging rate, 400 miles of range, and 0-60 mph acceleration time of as low as three seconds. The Honda Prologue EV won’t get the best of what’s technically possible, as it needs to be affordable.

Honda will design the exterior and interior of the Prologue SUV. It plans to borrow only the core components from GM, and so, rest assured, the Prologue SUV should look and feel like a true Honda even on the inside.

Alleged teasers of the Honda Prologue, which were viewable on Twitter (@Dear_March23), had already given away a few more details. Inside, it may not be fluidic with what appears like a single panel design like on the Kia EV6. With the GM-developed third-gen global EV platform underpinning it, we expect it to accommodate a practical frunk as well.

Based on the trim line-up of the current Honda models, U.S. dealers (Boardwalk Honda of New Jersey and South Motors Honda of Florida) are expecting the Honda Prologue in four trims: LX, EX, EX-L, and Touring. Of course, Honda could change its traditional trim structure when it launches the electric SUV.

Made in North America from 2024

Production of the Honda Prologue and its Acura offshoot will take place in North America. However, it is reported that GM will make these electric SUVs, not Honda. Neither Honda nor GM has revealed the production site, but as per an Automotive News report from January 2021, the Prologue would be made at GM’s Mexican factory (Ramos Arizpe) which began retooling for EV production in March 2022.

While briefing its electrification strategy on April 12, 2022, Honda said that it’s planning a production line exclusive to EVs in North America. So, Honda EVs launched in the U.S. after the inaugural vehicles will roll out of a Honda factory. While the company will initially procure Ultium batteries from GM, it is considering a joint venture to produce batteries in North America.

According to a report from the S.Korean publication Pulse, LG Energy and Honda could jointly construct a battery production facility with an annual capacity of 40 GWh in the United States. This plant would entail an investment of KRW 4 trillion, which converts to around USD 3.3 billion. As per the report, it would ensure battery supply for 600,000 high-performance EVs annually. GM already has an alliance with the South Korean company for U.S. battery production.

Honda expects to launch the Prologue SUV in early 2024 and introduce the all-electric Acura SUV in the same calendar year. Hence, it may unveil these cars in the second half of 2023. We expect the all-electric Honda SUV to compete with the VW ID.4 and cost around USD 40,000 in the base configuration.

In the U.S., the Honda Prologue will be available in select states at launch. Honda says that it will initially focus on California and the ZEV states, including Texas and Florida. The company expects these regions to bring the bulk of sales because of higher customer acceptance of EVs and regulatory requirements. It will expand the availability nationwide when the EV infrastructure and customer interest grow.

In the first year of sales, Honda is targeting to ship 70,000 units of Prologue. It hasn’t clarified whether that number includes the deliveries in Canada. Regardless, it seems like sales would be considerably lower compared to the gasoline SUVs like the CR-V and Pilot. The company has been clocking 300,000+ CR-Vs and 100,000+ Pilots annually in the U.S. for years now.

Dave Gardner, Executive Vice President (National Operations) and General Manager (Automobile Sales), Honda (USA), has told dealers that the demand will be “very regional” initially, as per an Automotive News report. The current EV demand exists mainly because of state and national governments’ more stringent fuel economy standards, not because of direct customer interest, Gardner suggested. The company is opposing the Biden administration’s plan to provide extra an incentive on EVs made at American factories with unionized labor.

Honda is preparing dealers for its EV launches in the United States. The company is planning a new experience for customers when they buy or service EVs. The new design will provide dealers with a modular and flexible space, which could be useful in the future when customers move towards alternative purchase methods (like online) and also when lower inventory is required. The new dealer experience will include the availability charging stations (Honda mentions a “number and type of EV charging stations”) based on expected electric vehicle sales by 2030. Dealers will also need to acquire special tools and equipment to service Honda EVs.

The Honda Prologue will have a luxury-segment cousin from Acura. The untitled Acura electric SUV is the second EV that Honda plans to co-develop with General Motors, and as per Automotive News, it would be manufactured alongside the Lyriq in Spring Hill, Tennessee. It will follow the Honda SUV later in 2024.

General Motors has developed a patented heat pump that recovers and repurposes waste heat energy from EV components. It’s a standard feature on GM’s Ultium-based EVs, and the Honda Prologue should also get this energy-saving feature as standard. The heat pump can recover waste heat from the SUV’s propulsion system, the body heat from passengers, and the humidity from both inside and outside. The recovered heat can be reused for heating and other functions, such as improving performance or warming up the batteries before charging, offering a claimed 10 percent additional range.

Not the first Honda electric SUV

You read it right. The Honda Prologue isn’t the first mass-market Honda electric SUV. The company has already developed electric SUVs derived from the Honda HR-V, called VE-1, X-NV, and the GAC-Honda M-NV, but sells them only in China (through its local JV partners). Then there are the Honda e:NS1 and Honda e:NP1 twins based on the new generation HR-V, with the former already on sale. Europe will get the Honda e:Ny1 in 2023.

The Honda Prologue is true to its name in North America. It will mark the beginning of a blitz of Honda BEV (Battery Electric Vehicle) models in the region and has no connection to current or previous Honda vehicles.

What is the Honda Prologue release date?

Which models will be Honda Prologue rivals?

What will be the Honda Prologue price?

The Honda Prologue could cost around USD 45,000 in its base configuration. 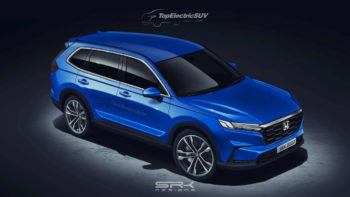 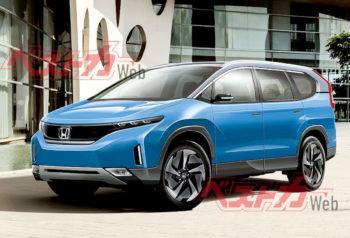 A Honda CR-V EV has to be launched eventually, but when and how? Find out here. 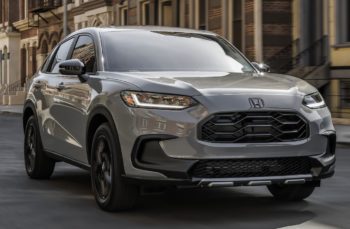