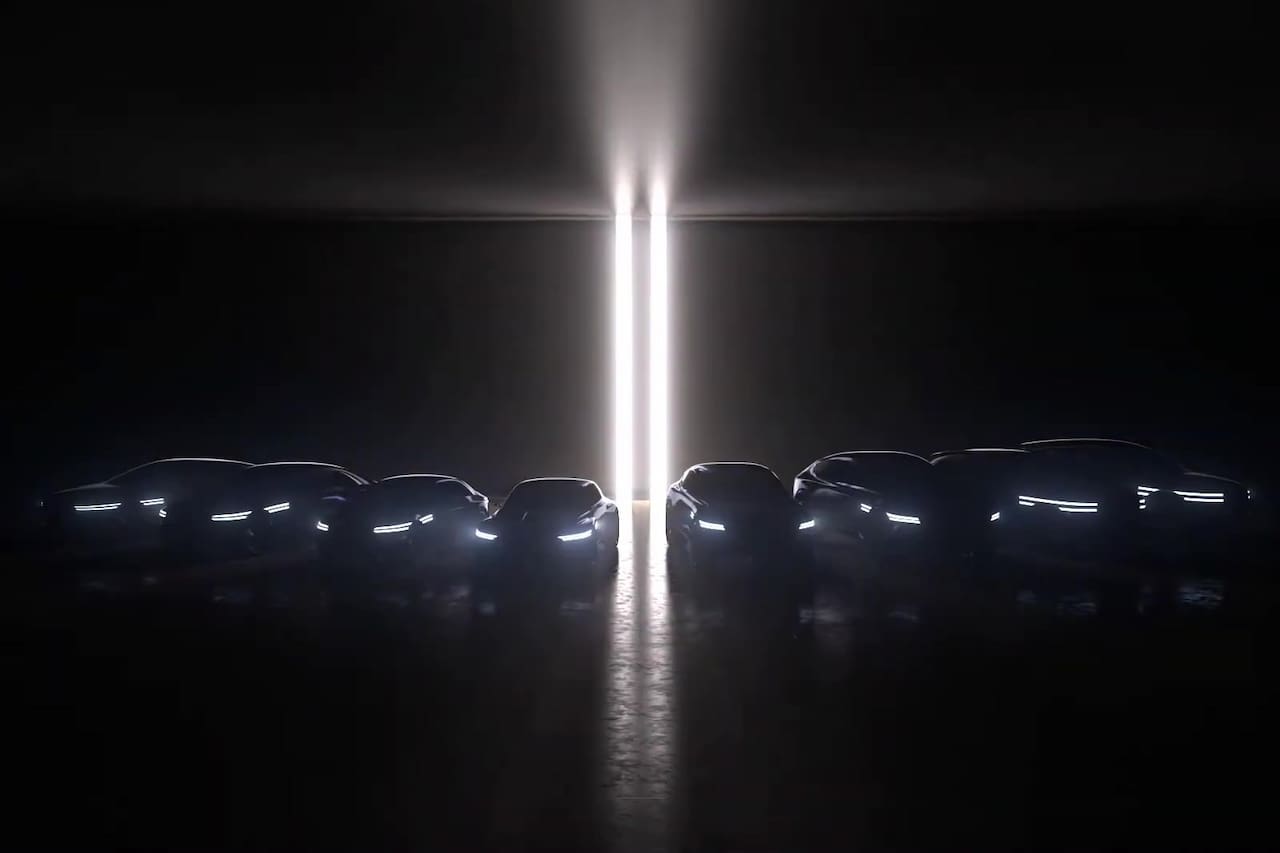 Genesis, Hyundai Motor Group’s luxury brand, detailed its vision of going carbon-neutral on September 2, 2021. In its presentation (via Youtube), the company revealed that it will offer 8 EVs, and the teaser of its future EV line-up that was part of the announcement indicates that four will be crossover/SUV models.

All future models shown in the teaser have the signature Two Lines design element on the sides, a feature not present on the Genesis Electrified G80 and Genesis GV60, which have it only on the front fascia. “The Two Lines are us,” Genesis said in the recent GV60 announcement, emphasizing how this design element makes models instantly recognizable and its growing importance in future launches. The model on the extreme right is a large SUV, probably a Hyundai Ioniq 7 relative. It could arrive as the Genesis GV90 with three-row seating.

In an exclusive report on November 30, 2021, etnews.com said that Hyundai Motor Group had started Genesis GV90 development. The company is discussing the development and supply of electronic parts planned for use in the future model with partners. It will produce working prototypes sooner or later, and we’ll likely see them undergoing tests on public roads from that stage. Until then, unofficial illustrations are all we’ve got to share about the design unless HMG were to release a concept car this year. Hyundai and Kia announced their future flagship SUVs with concepts in 2021, so it’s not unrealistic to expect Genesis to follow this year.

The images below are speculative renders of a Genesis GV90 from South Korean artist NY Mammoth. The flagship SUV could offer interior space comparable to conventional full-size luxury SUVs like the Mercedes GLS and the BMW X7 in a smaller size, thanks to the dedicated EV platform E-GMP.

The rendered Genesis GV90 has a typical crossover styling with plenty of curves and a low height that makes it softer than the Jeep Grand Wagoneer or the Cadillac Escalade, both of which will have EV variants around 2024. In addition to the signature crest grille and the quad lamps, it has Mercedes-AMG-style rounded bumper outer sections and air intakes featuring two gloss black fins.

The bow-shaped greenhouse makes the SUV grander and more luxurious than the GV80. At the rear, the tailgate is almost entirely straight, and that, along with the minimally sloping roofline, should ensure that the third-row passengers get the maximum space possible, making the most of the SUV’s long and tall body. The other design highlights at the rear are thin, twin-lined Quad Lamps and a chrome-finish raised lower spoiler complementing the roof spoiler.

A report from The Korean Car Blog suggests that Genesis built early prototypes of the GV90 using body panels of Hyundai’s Palisade. Spy pictures of this purported test mule have surfaced online, but they haven’t revealed design details of the series production GV90. Testing could begin this summer, and that’s when we should get the first glimpse of the exterior.

The GV90 would benefit from the advancements of the Hyundai Motor Group’s E-GMP platform. Below are some of the features one expects from the group’s flagship SUV.

According to The Korean Car Blog’s sources, the GV90 will feature a ‘Magic Roof’ that allows controlling the light and heat, and transparency. We think this could be a glass roof that users can change from transparent to opaque electronically. It’s also possible that Genesis is going for a technology similar to SPD-SmartGlass that allows individually dimmable sections. Another catchy feature The Korean Car Blog mentions for the GV90 is a new type of heating system derived from Ondol, a traditional Korean underfloor heating system.

Like every other E-GMP EV model, the Genesis GV90 should feature a multi-charging system that supports both 800V ultra-fast charging and 400V fast-charging. Expect the full-size electric SUV’s maximum charging capacity to be between 250 and 350 kW, which would allow charging from 5 to 80% as quickly as in under 20 minutes.

Thanks to V2L technology, the GV90 should allow using it as a mobile power source. Customers will likely be able to charge external devices and even other EVs with up to 3.6 kW of power.

This year, HMG plans to start testing wireless vehicle charging technology in the GV60. This technology should be ready by the time it plans to launch the GV90, and if so, it will likely offer it in the flagship model.

The GV90 is likely to get a new-generation infotainment system developed using the NVIDIA DRIVE platform. This platform includes a hardware and software stack, and it will allow the infotainment system to combine navigation, connectivity, audio, video, and AI-based connected car services.

The GV90 should feature Face Connect, the brand’s face recognition system that locks and unlocks the vehicle’s doors without a key. An infrared camera will likely be integrated into the B-pillar to scan the driver’s face. Biometric authentication methods may include even a fingerprint reader built into the vehicle’s start-stop button.

The GV90 could get Valeo’s third-gen LiDAR that debuted in November 2021. Valeo plans to commercialize its latest LiDAR sensor in 2024. Vehicles equipped with the third-gen Valeo LiDAR allow autonomous driving on the highway at speeds of up to 130 km/h. This LiDAR works in all light conditions, be it dazzlingly bright or pitch black. It creates a 3D real-time view of the vehicle’s surroundings at a rate of 4.5 MP and 25 fps.

The Genesis GV90 could use the same motors and battery pack as Hyundai’s Ioniq 7 and Kia’s EV9. The Hyundai model will reportedly come in RWD and AWD variants, with the latter packing two motors generating 308 horsepower. However, the output figures in the Genesis model could be higher to match the expectations of premium SUV customers.

A 100 kWh battery pack providing a range of more than 300 miles is likely to be the source of energy in the top-end GV90. Either at the launch or during the lifecycle, the GV90’s battery pack may consist of new lithium-ion battery cells with more energy density than the currently used lithium-ion battery cells. In its mid-to-long term EV strategy document (link), Hyundai has said that it plans to raise the energy density of lithium-ion cells from 600 Wh/L to 700 Wh/l by 2025 before moving to solid-state technology (mass-production) in 2027.

The Genesis GV90 electric SUV will enter series production in 2023, claims the etnews.com report. This year, a concept version could precede it, keeping potential customers engaged until the sales launch at the end of 2023 or early 2024.

Genesis’ goal is to become net carbon neutral by 2035. Chang explained briefly how:

The end goal is to pursue carbon net-zero by 2035. In addition to the bold transition to 100% electrification, we intend to innovate the entire value chain, beginning with raw materials,  vehicles, and their components, to all worksites that include plants where the cars are made.

The Genesis Electrified G80 and the Genesis GV60 went on sale in S. Korea in 2021. Deliveries of the latter in the U.S. and Canada will start this year.

Hyundai Motor Company launched Genesis as a separate luxury brand on November 4, 2015, and the first model, the Genesis G90, followed on December 9, 2015. “So far, it’s been an intensive, bold, and successful journey,” Euisun Chung, Chairman, Hyundai Motor Group, said during the ‘Futuring Genesis’ event on September 2, 2021. In the presentation to announce its long-term vision and new sustainability goals, Genesis said that it is becoming a 100% EV brand by 2030 and a carbon-neutral brand by 2035.

What is the Genesis GV90 release date?

Which models will be the Genesis GV90 competitors?

The Range Rover EV, Cadillac Escalade EV, Jeep Grand Wagoneer EV, and the Mercedes EQS SUV should all be indirect rivals to the Genesis GV90. 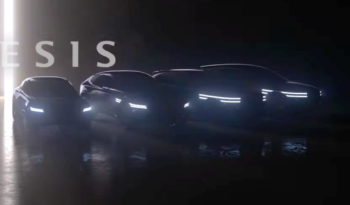 Update – Maeil Business has received a response from Hyundai, which refuted rumors of the cancellation of FCEVs. 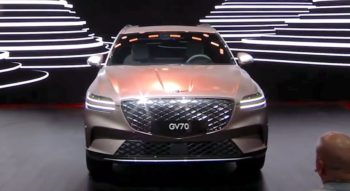 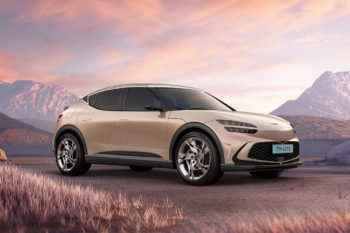