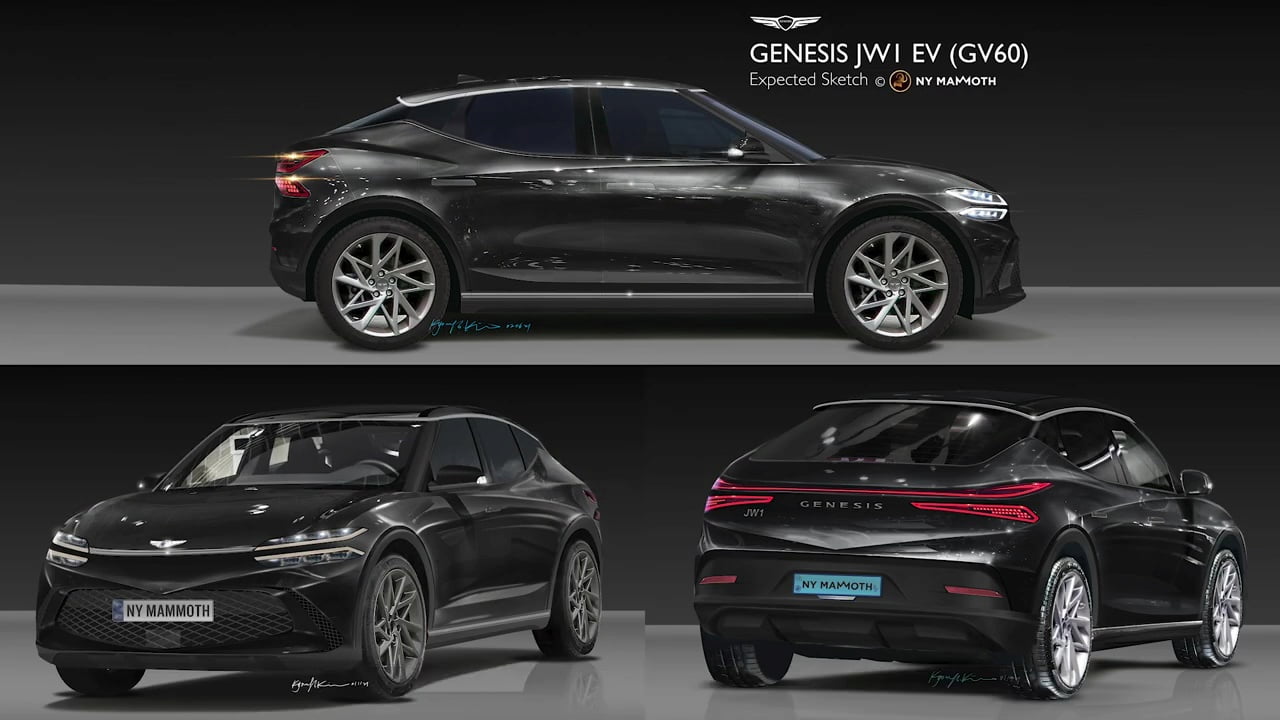 Update: Peter Lanzavecchia, the chairman of the Genesis National Dealer Advisory Council, has told Automotive News that the Genesis JW (codename) will be named the Genesis GV60. Lanzavecchia said that that confirmation of the name of the battery-electric vehicle is directly from the company. The premium electric crossover is expected to launch in the U.S. by the end of the year.

Another batch of Genesis GV60 spy pictures have come up revealing the wheel design of the crossover. The criss-cross five dual-spoke alloy wheels could measure 20 inches in diameter and be offered in the mid-tier trims. It is wrapped in Michelin tires, although it’s difficult to figure out the series. Spy pictures show the alloy wheels in a sportier five-twin spoke design, which could be reserved for the most performance-focused configuration, and in an EV-typical aerodynamic design.

Earlier this month, Naver user shadow0122 (NY Mammoth) presented renderings of the Genesis GV60 compiled with details from high-resolution spy pictures. His work showed the expected design of the upcoming luxury electric crossover from the front, sides, and rear in multiple colors. Skip to the 4:20 mark to see the Genesis GV60 render in different paints:

In recent updates, the interior of the Genesis GV60 was spied during cold weather testing in Europe. The pictures, carried by thekoreancarblog.com, implied that the interior would be a notch above the Ioniq 5 and the Kia CV, possibly including higher quality and more sophisticated-looking upholstery and trim, more comfort and convenience features like massage seats and rear-seat entertainment system, and a rich color-coding.

The photos showed a similar layout for the cockpit, though, with two large screens in a landscape orientation clubbed together, a virtual instrument cluster and a central display. AR-enabled head-up display, natural voice recognition and gesture control are expected to be part of the equipment.

It was an exclusive report from Asia Times at the beginning of this month that said that Hyundai Motor Group will christen the Genesis JW as the Genesis GV60. The company plans to begin mass production in August.

The base variant of the Genesis GV60 compact SUV will likely cost about the same as the Genesis GV80 mid-size SUV, suggested a report from The Korea Herald in January. Prices of the US-bound electric SUV will fall between KRW 60 and 90 million or approximately USD 54,000 and 81,000 in the launch market of South Korea.

On the other hand, the top-end Genesis GV60 would cost more than the Genesis GV80 in the brand’s home market, as per the report. For reference, the latter starts at KRW 61.80 million (~USD 55,000) and reaches KRW 67.30 million (~USD 60,000) for the highest specification. Despite the smaller size, the GV60 is in a different league when it comes to features, technology and cost of ownership. Note that the prices quoted are before generous Korean government subsidy for EVs is applied.

The unveiling of the Genesis GV60, the first dedicated Genesis EV, is in the second quarter of this year (April – June 2021), South Korea’s ETNews.com had reported last year. The launch in the domestic market would happen in the second half. The annual production target for the luxury alternative to the Ioniq 5 and the Kia CV has been set 20,000 copies in the first year, ETNews.com had said in an older report.

A spy shot posted on AutoSpy.net shows the compact footprint of the crossover with tight overhangs and a sloping roofline.

Among the new-age technologies, the Genesis electric SUV will feature virtual exterior mirrors. A spy shot in a video youtube.com channel 김한용의 MOCAR posted indicates that the top-end Genesis GV60 electric SUV will come with virtual ORVMs. The virtual exterior mirrors could come as an optional extra in markets where regulation allows the sale of vehicles without traditional mirrors.

The Audi e-tron became the world’s first mass-production car available with virtual ORVMs when it arrived in 2018. These ORVMs are driver-controllable cameras in place of conventional mirrors. The feed they capture is displayed in realtime on screens placed inside the cabin, typically on the front door panels. The Audi e-tron, for example, uses Samsung-made 7-inch OLED displays, which the driver can touch the display and zoom in/out whenever required.

Virtual mirrors reduce blind spots and provide a clearer view in dark cloudy weather or in the case of direct sunlight. There’s also the benefit of smaller form factor and thus better aerodynamics due to reduced drag. They reduce the vehicle width, which means easier parking, and also reduced wind noise, which results in a more peaceful cabin atmosphere at freeway speeds.

The Genesis GV60’s virtual mirrors and the screens showing their feed could be shared with the Hyundai Ioniq 5. Thomas Schemera, Executive Vice President, Global Chief Marketing Officer, Hyundai, briefly talked about this technology during the unveiling. He said:

The Camera Monitor System or CMS is a Digital Side Mirror (DSM) that we are introducing for the first time on a Hyundai model (Ioniq 5). It assists drivers by providing the most optimal viewing angles and eliminating blind spots.

Other features shared with the Hyundai Ioniq 5 may include a movable console between the front seats that can be pushed to the rear thanks to the flat floor. This would allow the driver and front passenger to feel virtually closer and the rear passengers to access the wireless charger. Similarly, the second-row seats could have a sliding function for more flexibility in the boot compartment.

The Genesis JW EV will sit on the same platform as all the Ioniq 5 and the Kia CV – Electric Global Modular Platform (E-GMP). E-GMP offers the potential to incorporate an 800V high-voltage charging system and offer ultra-fast charging to 80% level in just 18 minutes. This would make electric car charging a similar experience to refuelling an internal combustion engine vehicle.

Genesis brand will reportedly try to be the first global car company to offer wireless charging capability with GV60. Wireless charging enables the vehicle to be charged when it is parked like some smartphone models. Genesis plans to offer this feature alongside what it calls “plug and charge” technology where the car communicates with the charging station and manages payments, akin to an electronic toll collection system. The user would not have to pull out his or her credit card or corresponding pay card.

The company has reportedly tied up with US-based WiTricity which specializes in wireless charging to develop the technology and it would be able to provide a “speed of 6 to 8 kWh.” Genesis will offer customers conventional charging solutions via a 7 kW or 11 kW charger.

By offering advancements in the area of vehicle charging, Genesis attempts to establish an image of leadership in electrification, ETNews reports. Genesis is targeting the global market with the GV60 and plans to raise the competition level with new tech. Wireless charging stations are in a pilot stage in European countries and standardization and widespread adoption would take some time, but Genesis wants to be seen as setting the trend.

The first dedicated Genesis EV will have a skateboard-shaped platform structure that houses the battery pack and other core parts underneath the vehicle to make more cabin space for the occupants. Spy shots have shown a hatchback-like profile that makes for lower drag but with an SUV-like styling.

Like the Ioniq 5 and the Kia CV, the other new-age electric cars from the Hyundai Motor Group, the Genesis GV60 will look nothing like any brand model currently on sale. Similarly, its offbeat design will reinstate the fact that the company is trying to break the monotony and enter a new era with really futuristic technologies.

Hyundai Motor Group says that an electric car with an 800-volt charging system should offer up to 62 miles range after five minutes of charging. Support for 350 kW high-power chargers is a given, and IONITY has already started setting them up along the highways in Europe. For those new to the name IONITY, it’s a high-end charging network BMW Group, Daimler AG, Porsche AG and Ford Motor Company have formed in a joint venture. Hyundai Motor Group became a shareholder in September 2019.

Like the Hyundai Ioniq 5, the Genesis GV60 should have Vehicle to Load or V2L capability that allows using the vehicle as a power source. V2L enables using the battery pack’s electricity to run home appliances and other high-power equipment, which can prove to be useful during outdoor activities in remote places and also during power cuts. Moreover, bidirectional charging allows rescuing another EV stuck due to a depleted battery.

Road-testing of the Genesis GV60 is underway in South Korea and Europe since early last year. Expect the Genesis electric SUV to land in the U.S. showrooms this year as the most advanced Genesis car yet.

In addition to the Genesis GV60, a Genesis eG80 EV is in the works for the market in the following months, an electric sedan derived from the Genesis G80. Then comes a ‘converted’ electric SUV – the Genesis eGV70 based on the GV70 borrowing the eG80’s powertrain. This electric SUV will enter production this December, as per the Asia Times report.

The business strategy team at Hyundai’s luxury brand may have concluded that it is too late in the day for a Genesis hybrid car, and is leapfrogging to BEVs. Citing Del Rosso, CEO of Genesis, thedetroitbureau.com reported last year that Hyundai’s luxury division does not plan to launch hybrid or plug-in hybrid cars. 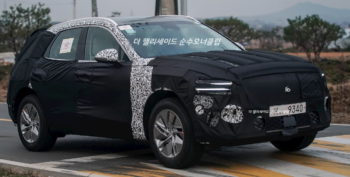 Series production of the Genesis eGV70 will begin in December this year, says a new exclusive report on asiatime.co.kr.