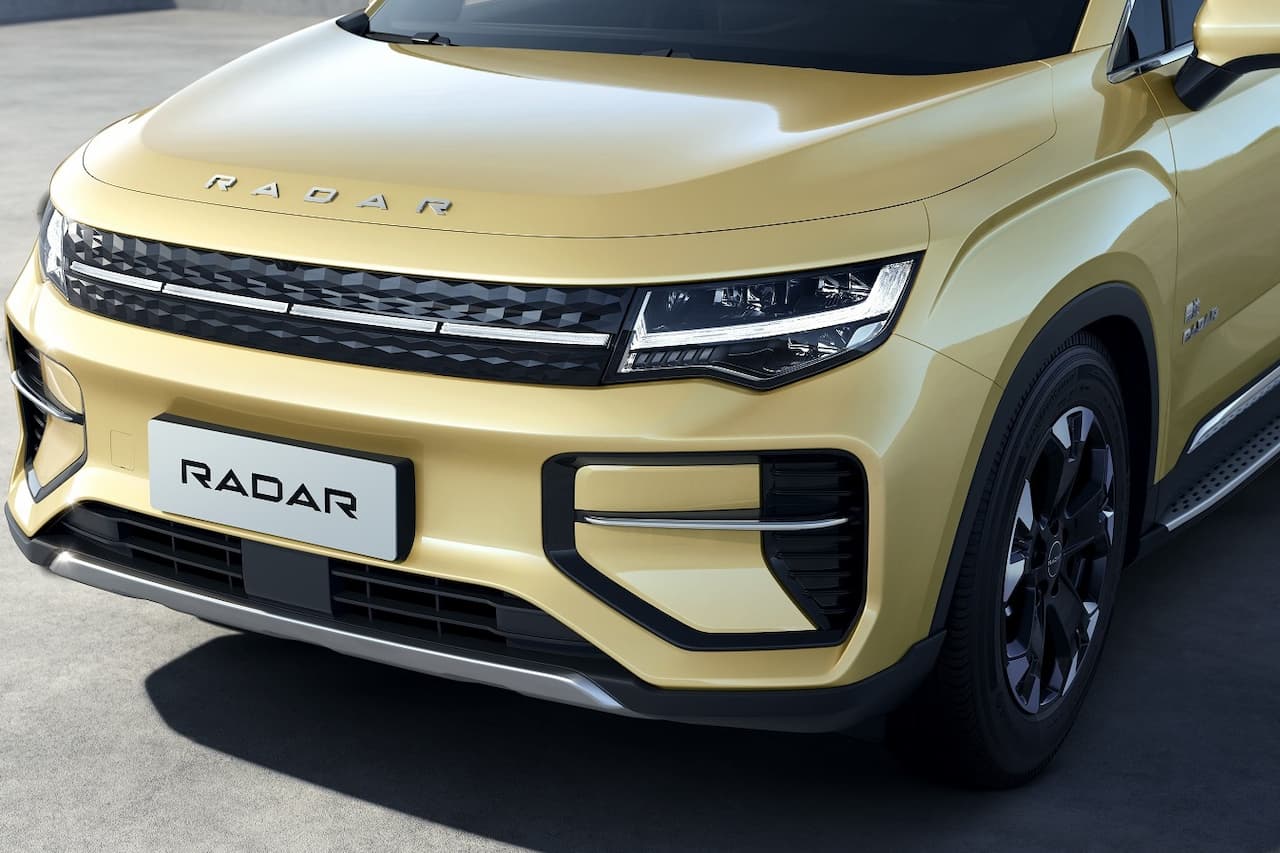 One out of every two electric vehicles that were sold in 2021 was bought by someone in China, says a Reuters report dated October 5, 2022. The country is expected remain a leading market for EVs this decade. Therefore, foreign and domestic automakers are creating new brands, vehicles, and venturing into new segments to serve the relentless demand.

One of the companies that are answering this call is the Geely Holding Group, which came in at 229th place on the Fortune Global 500 list for 2022. It launched an all-new sub-brand in China on July 12, 2022, called Radar Auto. At the same event, the Radar RD6 pickup truck made its official debut.

Here’s what we know about the new Chinese electric pickup truck.

The Radar RD6 may not be large and imposing, but its design is suitably modern and may even be perceived as understated from some angles. Up front, the clamshell hood bears a bold ‘RADAR’ emblem, while an LED light bar spans the entire width of the car. The closed grille sits in the middle, flanked by full-LED headlamps on both sides. The bumper juts out ever so slightly and is stylized with large intake housings, with a faux skid plate covering the lower section.

Viewed from the sides, the RD6 looks quite handsome. Its carved fenders and chunky door-mounted mirrors gel well with chrome and matte black trim. However, the 17-inch wheels look a touch too small, even more so given this truck’s “lifestyle” and “adventure” marketing. The rear is quite well-styled, mainly thanks to the LED tail lamps that also get a peculiar X design for the main units.

The cabin of the RD6 looks well-trimmed and respectably modern while boasting an expansive 55-inch panoramic sunroof. The stitched leather upholstery and metallic accents add to the ambiance, with the streamlined design of the door trim and AC vents further boosting the perceived quality of this interior. The layout of the climate control buttons looks upscale, and the leather-wrapped flat-bottom steering wheels bring in some class too.

Storage options are dotted across the interior, including a 48-liter (12.6-gallon) storage space hidden underneath the rear seats. Stowage can also be found in the center console area and in the door pockets, plus under the center armrest and behind the front seats. There’s also a small cubby right under the rear AC vents. While the rear seats do get a center armrest, the backrest cannot be reclined much due to the lack of space behind them.

Drivers of the Radar RD6 will be presented with a 12.3-inch instrument cluster and another 12.3-inch touchscreen for the infotainment system. The displays look reasonably sharp and run the “Galaxy OS Smart Ecosystem”, which integrates AI voice assistance and apparently supports multiple apps. Adding to the new-age environment is a 9-inch head-up display that projects all necessary information in color-accurate detail and a 72-color LED ambient-lighting package.

The Radar RD6 pickup is built on Geely’s pure electric platform and technical architecture, better known as the Sustainable Experience Architecture or SEA. Being a scalable platform, we will see future Radar EVs making use of it as well.

The electric pickup truck is kitted with McPherson independent suspension at the front and a multi-link independent setup at the back. According to Radar, the RD6 is “as easy to drive as an SUV” whilst also offering a car-like driving quality. The so-called “Hurricane Shadow” unibody construction of the RD6 has a drag coefficient of 0.32 Cd, though the platform is currently only offered with rear-wheel drive.

Radar has fitted the RD6 with high-energy-density Ni55 batteries that feature Bosch’s iBooster intelligent energy recovery system, which can supposedly add up to 30% energy back into the batteries. Safeguarding mechanisms here include the Smart electrical safety protection system, four-circuit protection, lock car discharge protection, and over-temperature & over-current leakage protection. Owners can also keep track of the vehicle’s battery by using the APP remote control feature on their smartphones.

The battery packs found in the Radar RD6 are nickel-cobalt-manganese (NMC) ternary units. The RD6 can be charged using an 11-kW household AC fast charger, or even quicker when plugged into a 120-kW DC fast charger. The latter can top up the batteries with 120 kilometers (74.5 miles) of range in a matter of just 15 minutes. Meanwhile, the bed of the pickup is home to 6 power ports. These include a 6-kW external discharge station, plus a 220V 10A/16A interface, a 12V 10A interface, and a V2V charging facility.

Whichever battery pack is picked, the Radar RD6’s powertrain consists of a single permanent magnet synchronous motor located on the rear axle. Its maximum output is rated at 200 kW (268 hp) and 384 Nm (283.2 lb.-ft) of peak torque. This results in a 0 to 100 kph or 0 to 62 mph time of 7.3 seconds for the standard and medium-range variants. Meanwhile, the top-end variant achieves the same feat in 6.9 seconds. The top speed for all variants is rated at 185 kph (115 mph).

Radar Auto stands to benefit greatly by being under the vastly diversified and experienced Geely Group, which promised to provide the now-fledgling brand with “comprehensive services in technology research and development, intelligent manufacturing, quality management, channel services, supply chain coordination, and talent training” However, Radar Auto has its own CEO and will be run as a stand-alone brand – much like other sub-brands like Zeekr and Polestar.

The company also has its own state-of-the-art R&D facility located in Hangzhou, the capital of the Zhejiang province in China. The Zibo ‘Smart Factory’ facility in Shandong utilizes the international advanced intelligent production information system in its production line where the first batch of the Radar RD6 rolled out in early September 2022. The Radar RD6 pickup truck officially reached showrooms on November 11, 2022, though customer pre-orders had commenced a couple of months prior.

Radar Auto expects to start deliveries of the Premium Edition and Yue Ye Edition to commence in mid-January 2023 in the Chinese market.

According to the CarExpert story on November 3, 2022, Stephen Connor, Managing Director of Volvo Australia, is keen on the idea of the Radar RD6 coming to the land Down Under, to where it can offer back-office support. While Volvo Australia hasn’t made an announcement, that may change in the future.

With Volvo being owned by Geely and Australians’ love for pickup trucks (utes), it wouldn’t be far-fetched to have the RD6 officially reaching the Australian market. The Managing Director even went on to say that the company could easily train its team, while also providing technical and sales support for customers of the Radar EV.

The global electric pickup truck market is set to grow annually by nearly 22% between 2022 and 2032, with primary contributors being the North American and European markets, as per a forecast by Market Decipher. While electric pickup trucks such as the Ford F-150 Lightning and Hummer EV are fantastic, many may not be able to afford them. However, if there are viable options like the Radar RD6, that will most likely draw even more people into the electric pickup truck space.

Images in the story are from Radar Auto/Geely