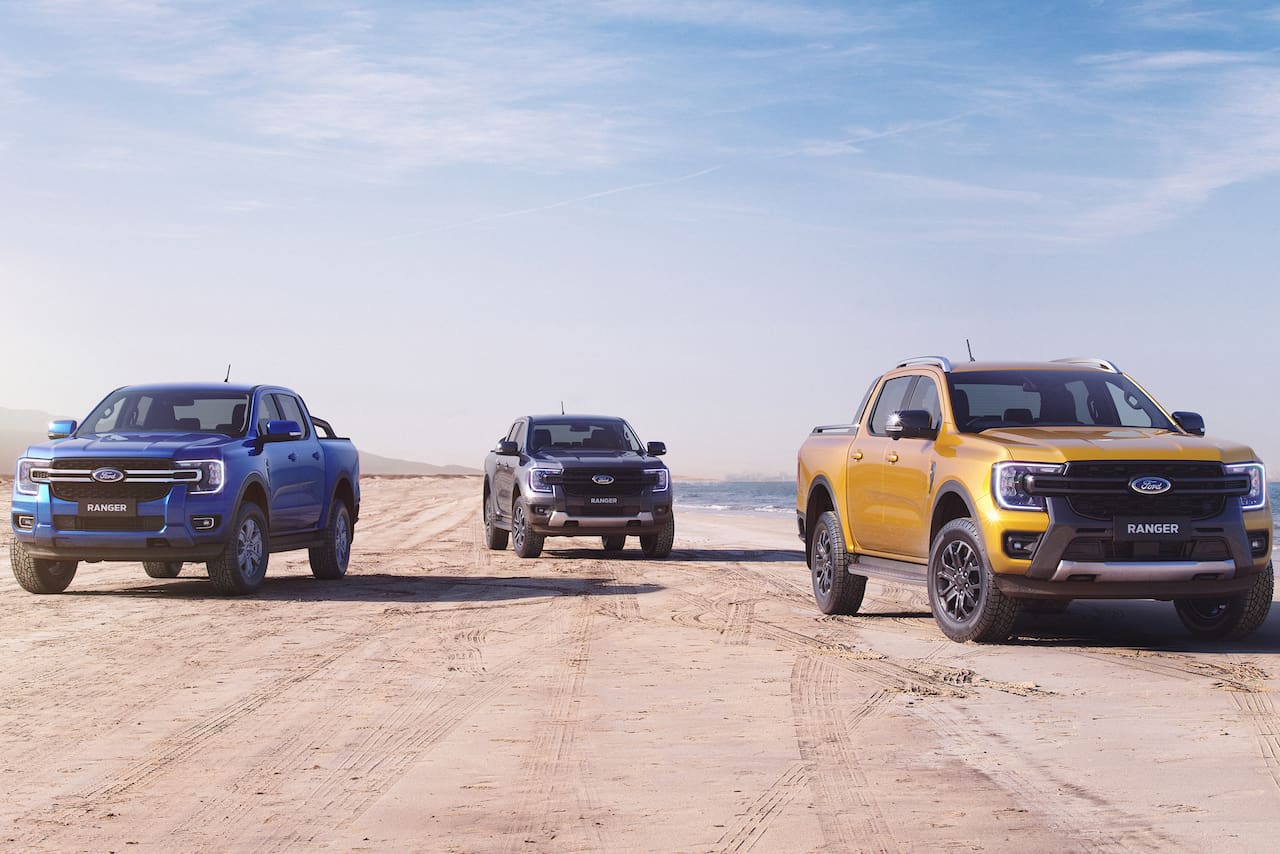 While the F-150 goes all-electric with the Ford F-150 Lightning (Ford F-150 EV) in 2022, Ford’s next step in the electrification process for the Ford Ranger will be a hybrid, which could also go on sale within two years. Shortly after, the lineup will include a Ford Ranger EV to complete the options.

The Ranger Hybrid would go to markets worldwide where emission norms are tightening or the EV charging infrastructure is nascent. Take a look at what lies ahead for Ford’s mid-size pickup truck.

The new-generation Ford Ranger looks as impressive as the new F-150. It sports large matrix LED headlights with ‘C-clamp’ daytime running lights, just like its American cousin. A taller and wider radiator grille emphasizes the pickup’s width and adds aggression. Like on the F-150, the radiator grille features a two-bar portion in the center cutting into the headlights. However, the Australian-designed one-tonne ute doesn’t have active grille shutters like the all-American full-size pickup. The all-new model features power bulges on the hood for an imposing appearance.

The side profile is similar to the current Ranger, but not identical. Sophisticated, concave surfacing on the door panels and a subtle shoulder line down the sides brings freshness to the truck’s design. Moving to the rear, like the headlights, the tail lights are available in a choice of halogen and LED units, and they feature the signature graphics on the front. Thousands of existing Ranger owners worldwide influenced the design of the next-gen Ranger. Product chief designer Max Tran explains:

The interior design of the T6.2 Ford Ranger has become contemporary and more car-like. The dashboard still has a familiar truck-like appearance, but the AC vents, steering wheel, and center console seem to have slimmed down. Reduced switchgear and other physical controls, a 12-inch SYNC 4 portrait touchscreen infotainment, and a fully digital instrument cluster give a cleaner and more sophisticated styling to the interior.

Ford says that the 2022 Ranger is the smartest Ranger ever, and with SYNC 4 available, we wouldn’t argue that statement. Remote Start, Vehicle Status, and remote lock and unlock functions are available on a mobile app, and Ford Power-Up wireless software updates should allow expanding the list of connected vehicle features conveniently in the future. Tech highlights include a 360-degree camera and a Qi wireless phone charger, too.

Ford has engineered the T6.2 Ford Ranger (T6 is Ford’s rear- and all-wheel drive architecture that underpins mid-size pickups and SUVs) at its Melbourne-based Asia Pacific product development center, but it’s not a regional model. One of the world’s best-selling pickup trucks, the Ranger has built a solid reputation in APAC and African markets. Ford sells the Ranger in over 180 countries.

The all-new Ranger is the toughest and most capable Ranger Ford has ever made. The company has brought extensive technical changes that improve its performance, ride and handling, strength, and efficiency.

An upgraded chassis lies beneath the new bodywork. The wheelbase is 50 mm longer, and the track is 50 mm wider. The longer wheelbase means improved space for the occupants. As for the 50 mm wider track, Anthony Hall, Ranger vehicle engineering manager says that it makes a huge difference, especially in the cargo box. For some basic items, such as a sheet of building plywood or a full-size, it will be possible to load them flat.

The engineers pushed the front wheels of the Ranger forward by 50 mm for a better approach angle and outboard for improved off-road articulation. They moved the rear suspension dampers outboard of the frame rails for an improved ride. Customers can choose from two 4WD systems – an electronic shift-on-the-fly system, or a more off-road-focused full-time four-wheel drive system. Dual recovery hooks in the front bumper now make off-road recovery easier.

Ford says that a hydro-formed front-end structure frees up space in the engine bay and helps future-proof the Ranger for other propulsion technologies. This way, it is hinting that it has developed the new-generation Ranger keeping alternative powertrains in mind.

On the Ford Ranger Hybrid

A new report from Drive discussed how a Ranger Hybrid will be part of the new-generation line-up, and the electrified ute will be available in Australia. Of course, European countries would have the highest priority for the Ranger Hybrid, followed by North American markets. However, being an RHD nation, Australia could be in luck and receive it earlier.

An engineer behind the development of the all-new Ranger confirmed during the media roundtable that the upgraded platform allows electrification. He said that the new, redesigned chassis has helped “future-proof” the Ford Ranger for other propulsion technologies.

The new Ford Ranger’s chief engineer, Ian Foston, also spoke to Drive during a media briefing. He said that they had gathered two big driving factors for electrification. The first is interest from customers who have used EVs before and are asking about the technology in Ford pickup trucks. Secondly, new legislation has been brought in for a number of markets that requires it.

The powertrain likely in question is the 2.3-liter turbocharged EcoBoost unit with a 10-speed automatic transmission combined with an electric motor to deliver 270 kW (362 hp) and 502 lb.-ft (680 Nm) of torque. This will reportedly be an all-new Plug-in Hybrid system that hasn’t featured on a Ford vehicle to date. Hence, it will be different from the 3.0-liter and 2.5-liter PHEV systems on the Ford Explorer and Ford Escape SUVs.

Hans Schep, General Manager, Commercial Vehicles, Ford (Europe), earlier this year discussed a rechargeable Ranger. He said that the company plans to release a Ranger plug-in hybrid before 2025, as per the report Automotive News Europe published in June 2021.

The T6.2 Ford Ranger will lend its chassis and internal components to Volkswagen for the next generation VW Amarok. VW will clearly differentiate (visually and otherwise) its offering from the Ranger. The VW Group acknowledged that there wouldn’t have been a successor to the Amarok had it not been for the collaboration with Ford. The Blue Oval will also manufacture the next-gen Amarok at its Silverton plant in South Africa from 2022, alongside the new Ranger.

Ford will start manufacturing the all-new Ranger at factories in Asia and South Africa in 2022. The company plans to start taking orders in Europe in late 2022 and begin customer deliveries in early 2023. Australia, South Africa, and several other core Ranger and one-tonne ute markets should get the all-new Ranger earlier in 2022.

Ranger6G.com has received inside information about the new-generation Ranger’s production and release dates. The global model is internally called Ford P703, and it will go on sale in Asian markets first and later in Australia in May 2022. The U.S. model’s internal coding is Ford P703N, with the ’N’ letter likely denoting North America. It will arrive as the 2023 Ford Ranger.

Production of the P703N Ranger will begin at the Michigan Assembly Plant on May 1, 2023, and the launch is programmed on July 3, 2023. Ranger6G.com also claims to have seen the EOP (End Of Production) date of the U.S.-spec next-gen Ranger – April 2031.

The current Ford Ranger line in the United States kicks off at USD 25,070, so expect prices to remain more-or-less the same when the T6.2 goes on sale. However, where the current Ranger Raptor – the sporty variant of the pickup truck – is not available in North America, reports suggest the next-gen Ranger Raptor will make it to the U.S.

On the Ford Ranger Electric

On February 17, 2021, Ford announced that all commercial vehicles in Europe would be zero-emissions capable – all-electric or plug-in hybrid – by 2024. The company expects two-third of commercial vehicle sales in the region to come from PHEVs and EVs by 2030. Given that the Ranger is Europe’s best-selling pickup truck, a pure electric powertrain (besides hybrid) should be a priority for the model. In 2020, the Ranger enjoyed a record 34.9% share in Europe’s pickup truck segment.

On May 26, 2021, Ford’s announcements at the “Delivering Ford+” themed 2021 Capital Markets Day may have uncovered the first detail of a Ford Ranger EV. The company revealed that it plans to introduce BEVs with RWD/AWD drivetrain layout on a new dedicated BEV platform. Hau Thai-Tang, Chief Product Platform and Operations Officer, Ford, confirmed that the platform would spawn a mid-size electric pickup truck. Ford markets the Ranger as its mid-size pickup truck in the United States.

Our new rear-wheel drive/all-wheel drive BEV flexible architecture will underpin a range of emotive vehicles slated for production between now and 2030, including active lifestyle vehicles with great driving dynamics, cargo vehicles for those whole value space and versatility for their commercial needs, pickups delivering legendary Built Ford Tough capability on mid-size trucks, rugged SUVs for our adventure-seeking customers, and high-margin, high-demand larger two- and three-row SUVs for families around the world, like Explorer, and Lincoln Aviator.

Ford may have started the groundwork for the Ranger EV, but it will likely take at least two years before the company shows a prototype to the media.

Ranger ICE model to run alongside the BEV/Hybrid

James Farley Jr., President & CEO of Ford, told The Verge Editor-in-Chief Nilay Patel on a Decoder podcast that Ford is a leader in markets like South Africa, Australia, and Europe with the Ranger. Ranger customers in some regions do 700-800 mile journeys. The technology (and the charging infrastructure in these societies) needs to evolve to deliver an extended EV range without compromising the Ranger’s affordability, capability, or usability. Hence, the combustion model will continue alongside the electrified Ranger versions for the foreseeable future.

What is the Ford Ranger Hybrid release date?

The U.S. launch of the next-gen Ranger will reportedly take place in the U.S. in July 2023. A hybrid variant could be part of the launch line-up.

Which pickup trucks would rival the Ford Ranger Hybrid?

The Ranger Hybrid will rival the Chevrolet Colorado, Toyota Tacoma, and Nissan Frontier on price.

What will be the price of the Ford Ranger Hybrid?

The Ford Ranger Hybrid is expected to cost around USD 30,000.