Production numbers confirm that Ford is witnessing higher demand for the electric Mustang than the gas-powered model globally. Between January and May 2021, Ford manufactured 27,816 units of the Mustang Mach-E, which was marginally higher than the production volume of the Mustang during that period – 26,089 units.

Producing more electric Mustangs than gasoline variants is a unique achievement for Ford, and it is a new trend rather than a flash in the pan. In June 2021, the company made 34,779 units of the Mustang Mach-E and 31,180 units of the Mustang. The gap between the two widened from 1,727 units in May to 3,599 units. In July 2021, Mustang Mach-E production shot up to 40,473 units, while Mustang production grew to only 34,863 units. The gap further widened to 5,610 units, with the EV remaining in the lead.

Ford makes the Mustang at the Flat Rock plant in the U.S. and the Mustang Mach-E at the Cuautitlan plant in Mexico. The SUV is obviously a more practical choice as it is suitable for families and benefits from the added appeal of an electric vehicle. Moreover, muscle cars, built for a niche segment, aren’t as popular globally as in the U.S., and the lack of rear doors or a boot puts them at a disadvantage.

With prices starting USD 42,895 onwards, the Mustang Mach-E is more expensive than the Mustang, which costs USD 27,205 units. However, the U.S. government offers a USD 7,500 subsidy, another reason for the buyer to opt for an electric SUV over a conventional model.

In Europe, the gap in retail prices is significantly smaller. In Germany, for example, Mustang prices start at EUR 49,300, while the Mustang Mach-E costs EUR 46,900 onwards. Factoring in the federal government’s EUR 9,000 environmental bonus, the electric SUV actually ends up being cheaper than the gasoline sports car.

Considering only the U.S., the Mustang Mach-E is yet to become as popular as the Mustang in terms of sales. Ford sold 36,074 units of the gasoline model but only 15,829 units of the EV between January and July 2021. Certainly, this gap would close in the coming quarters as the company introduces new Mach-E variants and part supply normalizes. Announcing the July 2021 U.S. sales, Ford said that the Mustang Mach-E remains at dealer lots for only 12 days.

Until May 2021, California was the largest market for the electric SUV, with one out of every four Mach-E units sold in the state. Nearly 70% of Mach-E customers are new to the Ford brand. Jim Farley Jr., President and CEO, Ford, revealed this statistic during the Q1 2021 conference call. He said:

The new Mustang Mach-E is proving to be a hit with customers just a few days on lot with very strong demand in North America, now in Europe, and coming to China. And it’s also bringing in new customers to the brand almost 70%.

Approximately 70% of Mach-E orders came from new customers coming out of other brands. This exceeded our expectations, proving we can grow our brand by electrifying our icons. And the mix of the Mach-E orders is very strong, with 90% high series premium vehicles and more than 80% long range batteries, again, exceeding our forecast.

The Mach-E can achieve a range (EPA est.) of up to 230 miles with the Standard-Range 68 kWh battery pack or up to 305 miles with the Extended-Range 88 kWh battery pack. Rear-wheel drive and all-wheel drive are the drivetrain layout choices, with the RWD configurations featuring a single motor and the AWD configurations packing two motors. With up to 480 horsepower and 634 pound-feet of torque, the Tesla Model Y rival accelerates from 0-60 mph in just 3.5 seconds (targeted time).

On the production of the Mach-E

Achieving the Mach-E’s production compatibility required the Cuautitlan Izcalli plant to undergo some significant changes. Ford manufactured the Fiesta here from 2010 to 2019, and the assembly of a BEV is quite different from that of an ICE vehicle. It took the company approximately one year to integrate new technologies and make the plant meet the requirements.

As part of the upgrade, the Cuautitlan Izcalli plant became the first Ford production facility globally to implement an artificial vision system. Thanks to its 190 Fanuc-type robots, 90% of the process can be automated. This plant has new stamping dies, weighing between 20 and 40 tons, a crane-type gripper, and two hooks that can lift 50 tons. The Mexican facility is also the first one to implement an anti-collision and anti-pendulum system in the cranes. These are only a few of the many changes the Cuautitlan Izcalli plant adopted to become ready to build pure electric vehicles. 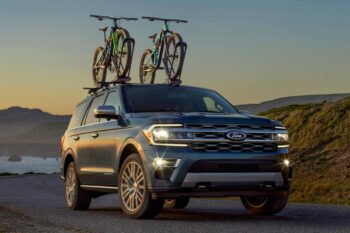 An Expedition Electric is likely in the pipeline. Here’s what you can expect from it.