The much-awaited 2023 Dodge Hornet has been revealed. Dodge claims that the 2023 Hornet is America’s quickest, fastest, and most powerful compact utility vehicle priced under USD 30,000. More importantly, the range includes a 2023 Dodge Hornet PHEV as well, and here’s everything we know about the new plug-in hybrid SUV.

The compact SUV segment, to which the Dodge Hornet belongs, currently offers a sales potential of over a million units, and it’s projected to grow by 48% in the next five years, Kuniskis said at the world premiere. Customers in this segment seek an affordable price, value for money, and high fuel economy. Dodge wants to lure compact SUV customers by offering a more exciting product, hinging on performance, with the Hornet.

For a brand that’s been built on stuffing horsepower and attitude into otherwise stodgy segments, we saw an opportunity to add performance and personality to a segment defined by efficiency and practicality.

It is worth noting that the Toyota RAV4 Prime does better than the Hornet PHEV in every important aspect. It is more powerful (302 hp), quicker (0-60 mph in 5.7 seconds), and more efficient (42 miles electric range + 94 MPGe fuel economy). All this for just a small premium, with prices starting at USD 40,300. As excited as Kuniskis is about the Dodge Hornet, stealing the RAV4’s thunder looks incredibly challenging.

The 2023 Dodge Hornet is nothing like the original 2006 concept. It’s a reworked Alfa Romeo Tonale with different branding. The positive side is that, unlike the concept, the production Hornet is much bigger with plenty of curves and creases, sleek lights, and raked D-pillars that convey its sporty character, but the bad news is that it’s not an original Dodge design.

The Hornet is immediately recognizable as a Dodge from its mail slot-style grille, plus there’s the Rhombi logo on the center of the grille. The headlamp cluster is simpler and includes a marker light in the corner. The lower air intake has a single, hexagonal grille, and the side air inlets look slightly wider. One more difference compared to the donor model is on the hood, with Dodge integrating two vents to extract the heat and provide a sportier styling.

On the sides, the Hornet differentiates itself with unique alloy wheels (18-inch as standard on PHEV) and Dodge-branded Brembo front fixed calipers (standard on PHEV). At the rear, the Dodge model looks sportier with dual circular exhaust tailpipes (standard on the PHEV), and it features a different design for the tail lamp cluster. Then there’s also the Rhombi logo in the center, which, for the first time on any Dodge, is an illuminated one.

The interior design of the 2023 Dodge Hornet is nearly identical to the 2023 Alfa Romeo Tonale. The main difference here is that there are distinctive outer HVAC vents “tipped” to angle towards the driver. The logo on the center cap of the steering wheel and the vehicle displayed on the screens are obviously different.

The 2023 Hornet features the UConnect 5 connectivity platform on its 10.25-inch infotainment system and the 12.3-inch digital cluster. UConnect 5 delivers faster-operating speeds and supports a host of new convenience and connected car features.

The 2023 Dodge Hornet PHEV employs a 1.3L turbocharged four-cylinder engine that’s assisted by an electric motor powering the rear axle. The electric motor produces 90 kW (121 hp) and 184 lb.-ft. of torque. As for the gas engine, Dodge hasn’t released the power output, but it says that the max. torque is 199 lb.-ft. The engine and motor offer 288 hp of combined power and 383 lb.-ft. of combined torque. The company has paired the plug-in hybrid system with a 6-speed automatic transmission.

Powering the electric motor is a 15.5 kWh lithium-ion battery pack with a nickel-manganese-cobalt (NMC) cathode and a graphite anode. It operates at 306 volts and weighs 276 lbs., and it can be fully recharged in approximately two and a half hours using a Level 2 charger. The onboard charger of the 2023 Hornet PHEV can accept input at up to 7.4 kW. Instead of a conventional alternator, the new plug-in hybrid SUV has a starter generator, which delivers torque to the engine belt and helps recharge the battery pack.

The 2023 Hornet PHEV is drivable in four modes: Hybrid, Electric, E-Save, and Sport. The Hybrid mode’s goal is to ensure maximum combined fuel efficiency, while the Electric mode offers zero-emission driving. Dodge expects the 2023 Hornet PHEV to deliver an EPA-est. pure electric range of more than 30 miles and an EPA-est. combined fuel economy of 79 MPGe. The E-Save mode prioritizes the gas engine and preserves the energy stored in the lithium-ion battery pack for later use. It offers a Passive option to maintain the charge and an Active option to help recharge the battery pack.

The Sport mode sharpens the throttle response, optimizes the gearshift schedule, and tightens the steering wheel. The 2023 Hornet PHEV has a power boost function as well, called PowerShot. It increases the system power by 25 hp for 15 seconds and reduces the 0-60 mph acceleration time by a whole second, to 6.1 seconds. The driver can reactivate PowerBoost after a 15-second cool-down period. The 2023 Hornet PHEV can attain a top speed of 128 mph.

PowerShot is an on-demand system that maxes out battery discharge and gives you an additional 25 horsepower and knocks a full second off the R/T’s 0 to 60 (mph) time.

The Hornet hybrid comes with fully independent MacPherson struts with Frequency Selective Damping (FSD) shock absorbers at the front and a 3-link Chapman suspension at the rear. Dodge claims that it delivers a maximum lateral g-force of 0.87. Dynamic torque vectoring is standard on the new plug-in hybrid SUV. Stopping power comes from disc brakes with Brembo calipers, fitted as standard at both ends.

In an interview with Motor Authority in August 2022, Kuniskis talked about the Hornet’s differences compared to the Tonale. The brand’s CEO said that while the company uses the same hardware as Alfa Romeo, “the tuning is different” and “it makes a huge difference.” The suspension, engine, transmission, and steering all have a different tuning in the Hornet to give the driver a more Dodge-like feeling.

For customers who seek added sportiness, Dodge will offer a Track Pack optional package that includes 20-inch Abyss wheels, Brembo brakes, dual-stage suspension, Alcantara sport seats with an embroidered Dodge Rhombi logo, and aluminum accents. The Track Pack will cost USD 2,995 above the vehicle price. Dodge hasn’t clarify if it will offer the Track Pack in the plug-in hybrid variant.

The production of the Dodge Hornet will take place alongside the Alfa Romeo Tonale at the Giambattista Vico plant in Pomigliano d’Arco, Italy. There’s no plan to launch the new compact SUV in Europe, though. Dodge’s biggest market continues to be the United States, where the brand is preparing to launch electric muscle car models based on the STLA Large platform starting in 2025.

The gas-powered 2023 Dodge Hornet is available to order and will start reaching dealer showrooms in America in late 2022. The Dodge Hornet PHEV will follow in spring 2023, and will be available in R/T and R/T Plus trims, priced at USD 39,995 and USD 44,995, respectively.

On August 17, 2022, one day after the SUV’s world premiere, Kuniskis announced that the company had received 14,000 pre-orders. This indicates that Americans are loving the new Dodge SUV. We imagine that Alfa Romeo may not have taken the news well, as high demand for the Hornet could have negative implications for the Tonale, which is its big break after the Giulia and Stelvio failed to live up to expectations.

The Dodge Hornet will gain aggression with additional configurations in the future, as indicated by the GT GLH Concept version showcased along with the production model during the global reveal. Later in August 2022, The Detroit Bureau told Kuniskis in an interview that the Hornet’s styling isn’t as aggressive as one might expect from a Dodge. In response, the CEO indicated that there’s more to come. The company could have used a more aggressive rear spoiler, and “maybe we will,” he said. Dodge models tend to have fairly long life cycles, he added, suggesting that the company is considering styling and performance updates in the next step.

What is the Dodge Hornet PHEV release date & price?

What are the competitors to the Dodge Hornet PHEV? 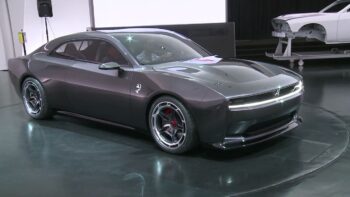 By mid-decade, two Dodge electric muscle cars are expected to hit the market.