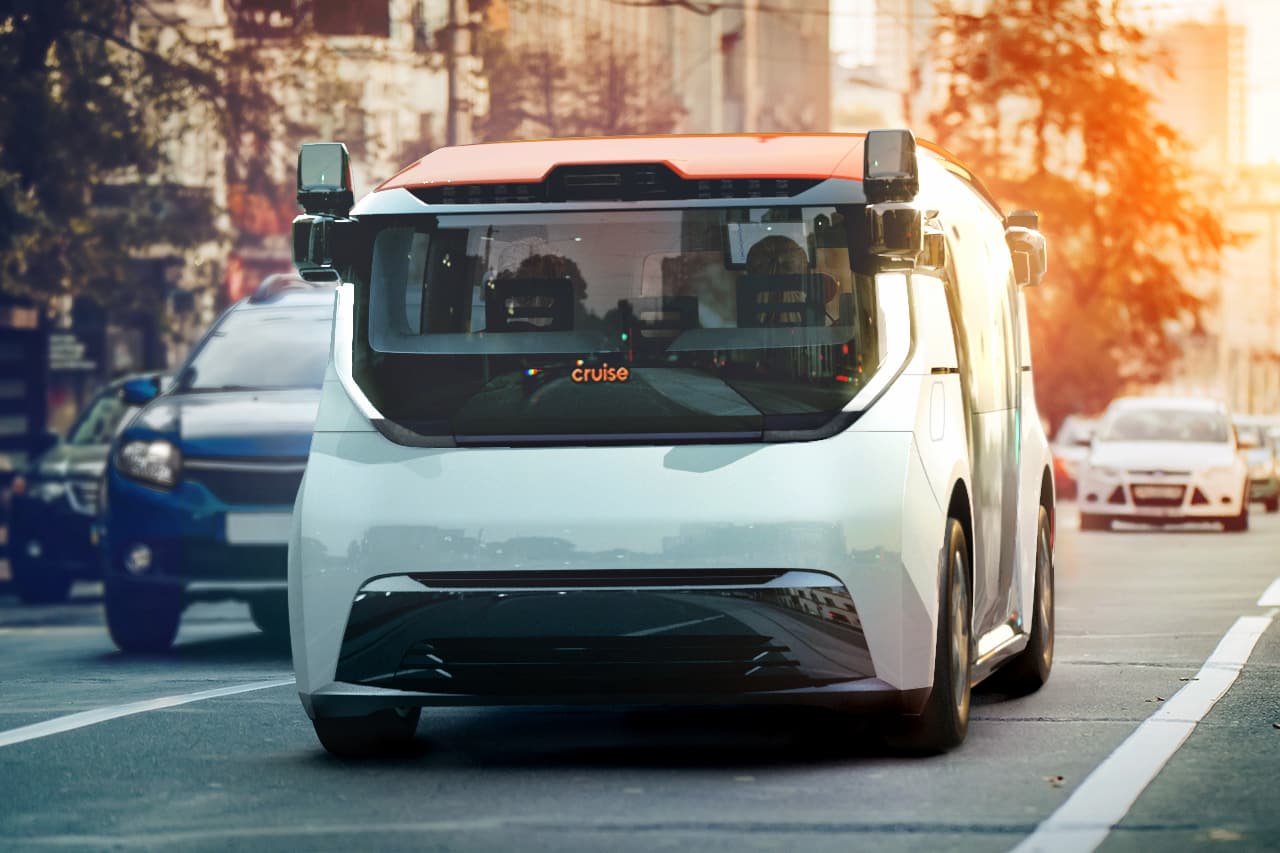 San Francisco-based start-up Cruise, now majorly GM-owned, aims to transform the shared mobility experience with its futuristic autonomous, all-electric vehicle – the Cruise Origin. Here’s everything we know about it so far:

The Cruise Origin is a purpose-built driverless ride-hail vehicle with a strong emphasis on comfort, convenience, and practicality. It will have a version designed for driverless cargo delivery as well.

The Cruise Origin is designed to have as much space as possible for passengers and cargo. That’s the reason it looks like an tilted refrigerator, but it’s still arguably one of the most radical purpose-built vehicles to date. It may appear too futuristic to be real, but in the words of former Cruise CEO Dan Ammann, “it is a production vehicle.”

The Cruise Origin may look like a big vehicle because of its boxy shape and extremely short overhangs, but as Cruise CEO Kyle Vogt said at its debut in January 2020, “it’s actually not bigger than a regular car – it’s just more efficient.” The Origin has large doors that are 3 times larger than the average car and slide open/close in the opposite direction electronically. The unconventional door design makes entering and exiting the vehicle very easy.

No mirrors, pedals or even steering wheel

The Origin doesn’t have mirrors, pedals, or a steering wheel. It offers a ridiculous amount of space for passengers. If we were to quote Vogt again, “every seat is like an extra legroom seat on an airplane.” The 78-inch tall self-driving electric vehicle has seats for up to six people. There’s no word on the specifications of the cargo version yet.

Cruise jointly developed the Origin with General Motors and Honda. GM came up with the Origin’s base design, while Honda was responsible for the interior’s “efficient use of space,” Vogt told The Verge in January 2020. Cruise’s work was developing the sensors and computing technologies, plus creating the perfect user experience.

The Cruise Origin is the first model based on GM’s third-generation EV platform and using its Ultium batteries. The modular platform has since underpinned the GMC Hummer EV Pickup, GMC Hummer EV SUV, and Chevrolet Silverado EV.

Ultium battery pack sizes range from 50 to 200 kWh, and for the Origin, we think higher capacity would make more sense. That’s because Cruise wants it to spend most of its life in motion, not sit in a parking lot waiting to get charged every now and then. Expect a 400-volt system voltage and a maximum charging input of up to 200 kW. It’s worth noting here that there are various versions of the third-gen EV platform, and GM has confirmed 800-volt battery packs and 350 kW fast-charging capability for only the truck version that underpins the GMC Hummer EV twins and the Chevrolet Silverado EV.

Production of the Cruise Origin will take place at GM’s Factory Zero Detroit-Hamtramck Assembly. On April 6, 2022, citing GM Chair and CEO Mary Barra, The Detroit Bureau reported that the Origin will be ready for commercial deployment in January 2023. The Origin will have a market in Japan as well. Honda Mobility Solutions, a Honda subsidiary, plans to use it for its autonomous vehicle mobility service (MaaS) business in the country in the middle of the decade.

Kyle Vogt, Chief Executive Officer, Cruise, mentioned during GM’s Q3 2022 earnings call, on Oct 25, 2022, that the company recently started operating the Cruise Origin on San Francisco streets, but is being manually driven to collect data. He reaffirmed that volume production begins next year. Vogt had tweeted in early November that the company had completed 400,000+ “driverless miles.”