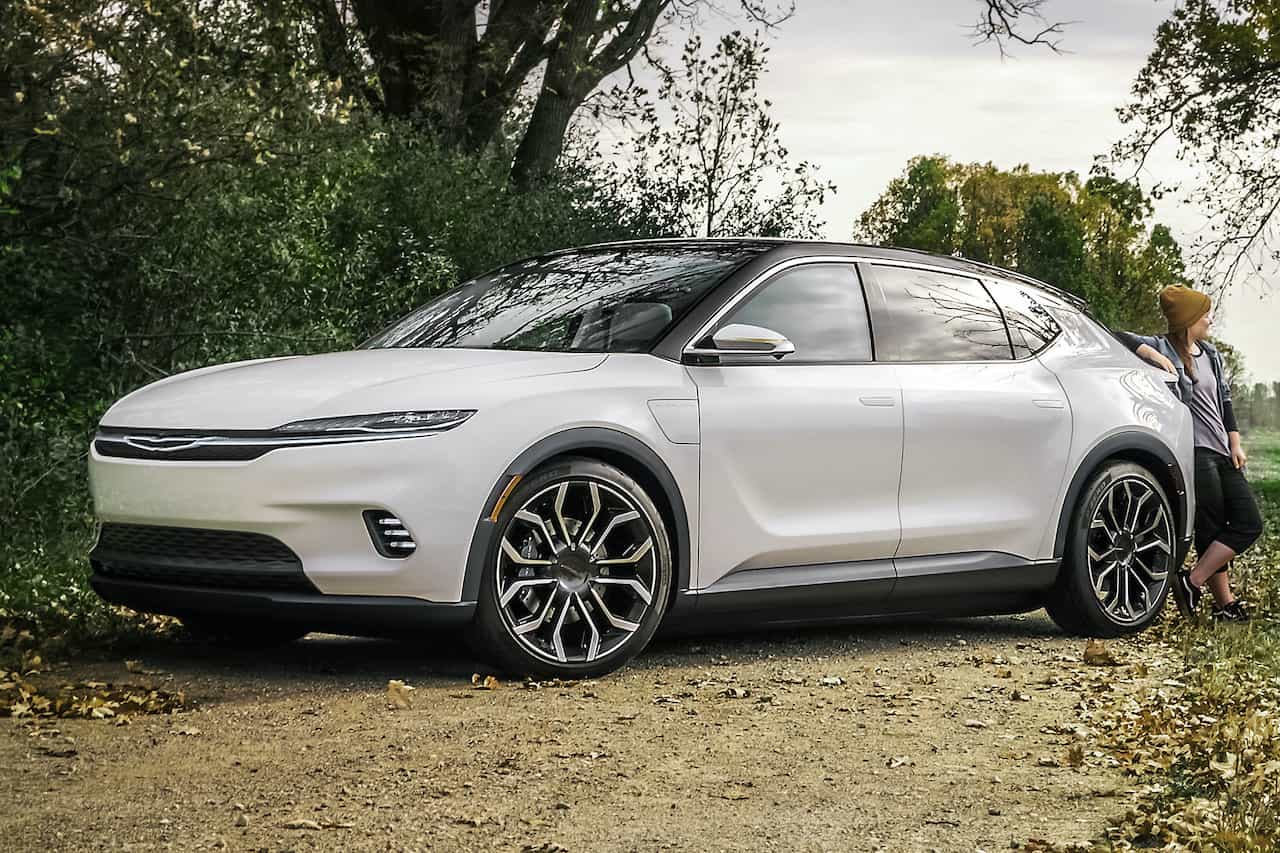 Update: ‘Exterior’ section updated with info on the Graphite concept.

At the Stellantis EV Day 2021 last July, the company teased its first Chrysler crossover electric vehicle for a few seconds, which was a more realistic concept derived from the Airflow Vision concept FCA introduced at the CES 2020. At the Stellantis Software Day 2021 in December 2021, the company revealed its name – Chrysler Airflow. As part of its CES 2022 announcements in the first week of the new year, Stellantis formally unveiled the electric SUV as the Chrysler Airflow Concept that showcases its future technologies.

Before you get your hopes up, we’ll mention that Chrysler has announced that there is no production plan for this SUV:

While the Airflow is a true concept vehicle, and not destined for production, it showcases our leading-edge electrified drive system technology that delivers up to 400 miles of range and fast-charging functionality. It includes advanced safety technologies that are true to Chrysler’s safety heritage and leadership and also includes intuitive A.I. and connected vehicle technology, because the future isn’t simply about making vehicles move from point A to point B.

The Chrysler Airflow Concept is an electric SUV coupe, which, if made, would have competed with the Tesla Model Y and the Ford Mustang Mach-E. Its silhouette is similar to that of the Ford Evos that is designed for the Chinese market. However, it’s completely original and further advancement of the Airflow Vision concept. It has an athletic profile and expresses a dramatic character like that design study.

The front bumper and headlights of the EV instantly highlight its connection to the classic Airflow Vision. LED light blades right below the headlamps flank the Chrysler logo. The faux upper and lower grilles feature a diamond pattern, and the fog lamp section houses three stepped LED light modules.

The Airflow Concept gets a short front overhang and literally nil rear overhang. With the wheels situated far out at the corners, it could have the longest wheelbase possible for the length of the car. This way, it can offer the most spacious cabin for its exterior dimensions. The floating roof, hunched tail section, slim mirrors, and sleek greenhouse lend it a sporty stance and usher in a new look for Chrysler. Flush door handles would reduce aero drag while giving it an upscale styling. A squarish cover hides the charging port located on the left front fender.

The steeply raked windscreen and the wider body below give the Airflow Concept a dramatic stance. An end-to-end single-piece taillight accentuates the electric SUV’s width.

At the 2022 New York International Auto Show, Chrysler unveiled the Chrysler Airflow Graphite Concept, a restyled version of the stunning concept. The “alter-ego” version gives the Airflow a bolder styling with changes like a Galaxy Black body color and Cyprus Copper accents on the panoramic sunroof, select wheel surfaces, fenders, mirrors, and greenhouse. Chrysler has used Cyprus Copper accents on the inside, along with Ice Grey as the theme color. Chrysler doesn’t state, but it’s safe to assume that the Airflow Graphite has no technical changes.

The interior of the Chrysler Airflow Concept also takes after the Airflow Vision concept’s design. This similarity is evident in parts that define a vehicle’s interior, including the dashboard, center console, steering wheel, and door panels.

The interior has minimalist vibes and a high level of digitalization, typical of high-end EVs. A ‘squircle’ two-spoke steering sits in front of the instrument cluster. A bridge-type console between the front seats connects the dashboard, and it houses a rotary dial, which should be the electronic gear selector. A massive panoramic roof lets in plenty of natural light. Moreover, it gives a great sense of space, offering a grand view of the sky.

The Airflow really what it represents is a third space, and customers are no longer looking for just a product to get them from point A to point B. They’re really looking for this kind of connected hub that allows their digital travel lifestyle to travel with them. And this is all real, this isn’t just a concept, this is something we’re looking to bring to the market soon.

Software actually controls almost the entire occupant experience in the vehicle. We’re actually over-designing the hardware so that it is capable of adding new features over time.

The Chrysler Airflow Concept has six screens, four at the front and two at the rear. The front screens consist of a small display in the driver-side corner that displays the cabin temperature and possibly a few other less important details. A large, fully digital instrument cluster shows the vital driving information beside it. A larger, floating display in the middle of the dashboard provides the infotainment system functions. The fourth display on the extreme right allows the co-passenger to view and change the navigation system, shuffle music, and more.

The two rear screens are entertainment displays for the rear passengers but helpful for productivity. For example, people can use their commute time to finish a video conference call they’d otherwise have to wait until they reach their office or home. Each seat features a built-in camera, so it’s not just the rear-seat passengers who can participate in group video conferences.

In our Airflow, you can seamlessly join a video conference through the integrated system of cameras, displays, and audio system in the comfort and the privacy of your cabin.

The Chrysler Airflow Concept is designed as a space to bring people together, both physically and virtually, by integrating all of the latest Stellantis technologies advancements, like STLA Brain, STLA SmartCockpit and STLA AutoDrive.

Stellantis sees software as a significant revenue stream for EVs. The company plans to allow upgrading its EVs even after they’ve already left the assembly line. These upgrades would include both permanent and temporary upgrades. Customers would be able to enable extra connectivity functions or entertainment features for a short period, like when going on a road trip, and save money by not shelling out a considerable amount for a permanent unlock.

Let’s talk about long road trips. The ability to customize your in-cabin experience with entertainment options like premium stereo, Wi-Fi, streaming music, or Fire TV built-in can be added easily on the fly.

The Chrysler Airflow Concept sports two 150 kW motors with an AWD configuration. It can accommodate larger capacity motors for high-performance applications, though. The optimal location of the motors toward the front and rear of the vehicle maximizes interior space. There’s no word on the battery pack capacity, but the internal estimation for the range is 350-400 miles.

Stellantis plans to release STLA Large platform-based EVs with battery packs with energy content between 37 kWh and 200 kWh. The company has confirmed that these models will come with 101-118 kWh (gross/total capacity) battery packs and achieve a range of up to 500 miles. Some would come with 125-180 kW (168-241 hp) powertrains, but most would sport more powerful 150-330 kW (201-442 hp) powertrains.

The STLA Large platform has outstanding fundamentals, with the batteries nice and low, the EDM motors at the edges, allowing for a variety of wheel sizes, suspension heights, and widths. All of these components are out of the way, allowing us to do just about whatever we want on the top surface.

Stellantis has established a tie-up with LG Energy Solution for EV batteries. The companies announced in October 2021 that they would form a joint venture for manufacturing lithium-ion batteries in North America. The yet-to-be-formed JV company will set up a battery manufacturing facility to supply to Stellantis’ factories in the U.S., Canada, and Mexico for its next-gen BEVs and PHEVs.

The new battery plant should start production by Q1 2024 (January-April 2024) and have an annual capacity of 40-gigawatt hours. Stellantis and LG Energy Solution haven’t finalized the location yet, but they should complete that task in the coming weeks, as they intend to break ground in Q2 2022 (April-June 2022).

Stellantis hopes to make Chrysler desirable and popular once again for a broad range of customers with the launch of the EVs. The company plans to launch the first Chrysler EV in 2025 and fully electrify the brand’s portfolio by 2028. Chrysler CEO Chris Feuell confirmed this development during the concept’s reveal:

This is just the start of our electrification journey, That future includes our commitment to launch the first Chrysler battery electric vehicle in 2025 and fully electrify our portfolio by 2028.

Further, Feuell revealed no plan to launch a production version of the Airflow Concept. She said:

While the Airflow is a true concept vehicle, and not destined for production, it showcases our leading-edge electrified drive system technology that delivers up to 400 miles of range and fast-charging functionality. It includes advanced safety technologies that are true to Chrysler’s safety heritage and leadership and also includes intuitive A.I. and connected vehicle technology, because the future isn’t simply about making vehicles move from point A to point B.

Along with the fully connected user experience, the Chrysler Airflow Concept previews our brand’s commitment to delivering a fully electrified vehicle portfolio by 2028. 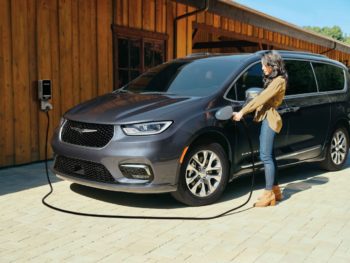 America’s popular minivan is all set to go electric in the next generation. 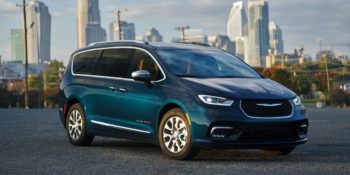 The 2022 Chrysler Pacifica Hybrid gets new features that make the MPV a lounge on wheels.